The Sportsman Motorcycle Series rolled into Earlville, Iowa this past weekend September 11-13 to invade Tri-State Raceway for the Lucas Oil Drag Racing Series Division 5 Finale. This was event 6 of the 6 race series which would also include the Inaugural Voss Enterprises Top Qualifier Superbike Shootout. The schedule was to have 2 qualifying runs Friday, 2 more Saturday, followed by the Superbike Shootout, all culminating with final eliminations on Sunday.

Friday came with overcast skies and cool temperatures as we began qualifying. After first round it was Dave Olsen holding the #1 spot with a .006 light. The motorcycle class is qualified on reaction times as it is a bracket race class and not an index class. Second round qualifying started with Mike Voss going .005 taking the #1 spot but that wouldn’t last as John Fitzpatrick went .002 on the tree and grabbing the #1 spot. Mark Gode would also go .002 but John did it first which left him #1 after the first day.

Saturday began with warmer temperatures and plenty of racing action set to take place. To help speed things up, due to a large car count, first round eliminations were scheduled to take place Saturday afternoon. This would eliminate 1 round of qualifying but they would still try to run the Superbike Shootout as well after 1st round. Riders tried to hit the tree hard with several -.00 red lights but no one could better John’s .002 so he would remain #1 and get the Voss enterprises $150 low qualifier bonus money.

Saturday afternoon first round was called to the lanes and anticipation levels were high as only 9 0f 18 riders would be fortunate enough to race on Sunday. As eliminations began pair by pair went down the track and there appeared to be a problem with the timing equipment with some people having very bad reaction times. After the round was already completed it was determined that crosstalk was not activated in the timing system so 6 of the 9 pairs had to be re-run. This caused the Superbike Shootout to be moved to Sunday. 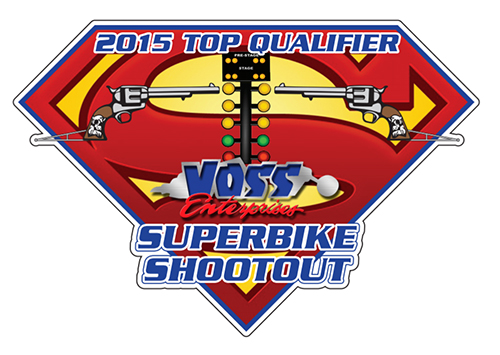 Sunday started with clear skies and a lot of racing to be done to determine the winners. As eliminations went on Cody Duffield and Patrick Roetto were having great days working their way to the final. Patrick was hitting the tree great and running deadly consistent while Cody was hitting the tree good and taking advantage of mistakes by his opponents to make his way to the final. In the final however it was Patrick who showed why he was in the final having the starting line advantage and running just off his dial in causing Cody to run too quick and break out.

This was Patrick’s first Divisional event win. “My goal this season was to win a divisional event Wally and now that I’ve done that I will see if I can stay in the top 3 in points” Patrick said of his win. Patrick would like to thank Curt Sexton of Chassis Werx for building the back half for his Hayabusa. He also would like to thank fellow racers John Fitzpatrick, Bruce Bennett and Les Knaak for their help, Harley Davidson for their class support, and The Legend Mike Voss for all he does for the division 5 motorcycle class.

With final eliminations complete it was time for the inaugural Voss Enterprises Top Qualifier Superbike Shootout. This had the 4 competitors who had made all 5 previous races facing off for a $600 purse and bragging rights. The ladder was based on qualifying results from the event qualifying. Mike Voss would face Cam Belisle and the husband and wife couple of Dave and Felicia Olsen from Denver, CO. would face each other.

Mike and Cam would be the first pair and Mike would be looking for redemption as Cam took him out in the 1st round of eliminations on Saturday. It was a dead heat off the line with Cam .008 and Mike .009 on the tree but it would be Mike Voss taking the win by .007 at the finish line to advance to the final. Next was Dave and Felicia Olsen, unfortunately Felicia would turn on the red light at the starting line giving Dave the automatic victory.

In the final Dave would get the starting line advantage and Mike would be unable to make up for it. Dave Olsen took the win on a double breakout. Dave also made the semi-finals earlier in the day. Although he wasn’t able to pull off the double up Felicia and Dave defiantly made the trip from Denver, CO. well worthwhile. They would like to thank Mike Voss of Voss Enterprises for all he does for the sportsman motorcycle class.

This is the last Division 5 event of the year but the racing is far from over. We still have our Division 5 Summit Racing Series ET Finals this coming weekend in Topeka, KS. September 18-20. This is the singular biggest event of the year, with a win on Sunday you get your share of purse money, a jacket, and a Wally. Most importantly you earn an entry at the Auto Club Finals in Pomona, CA. where you race against 7 other contestants for a shot at becoming the National Champion.