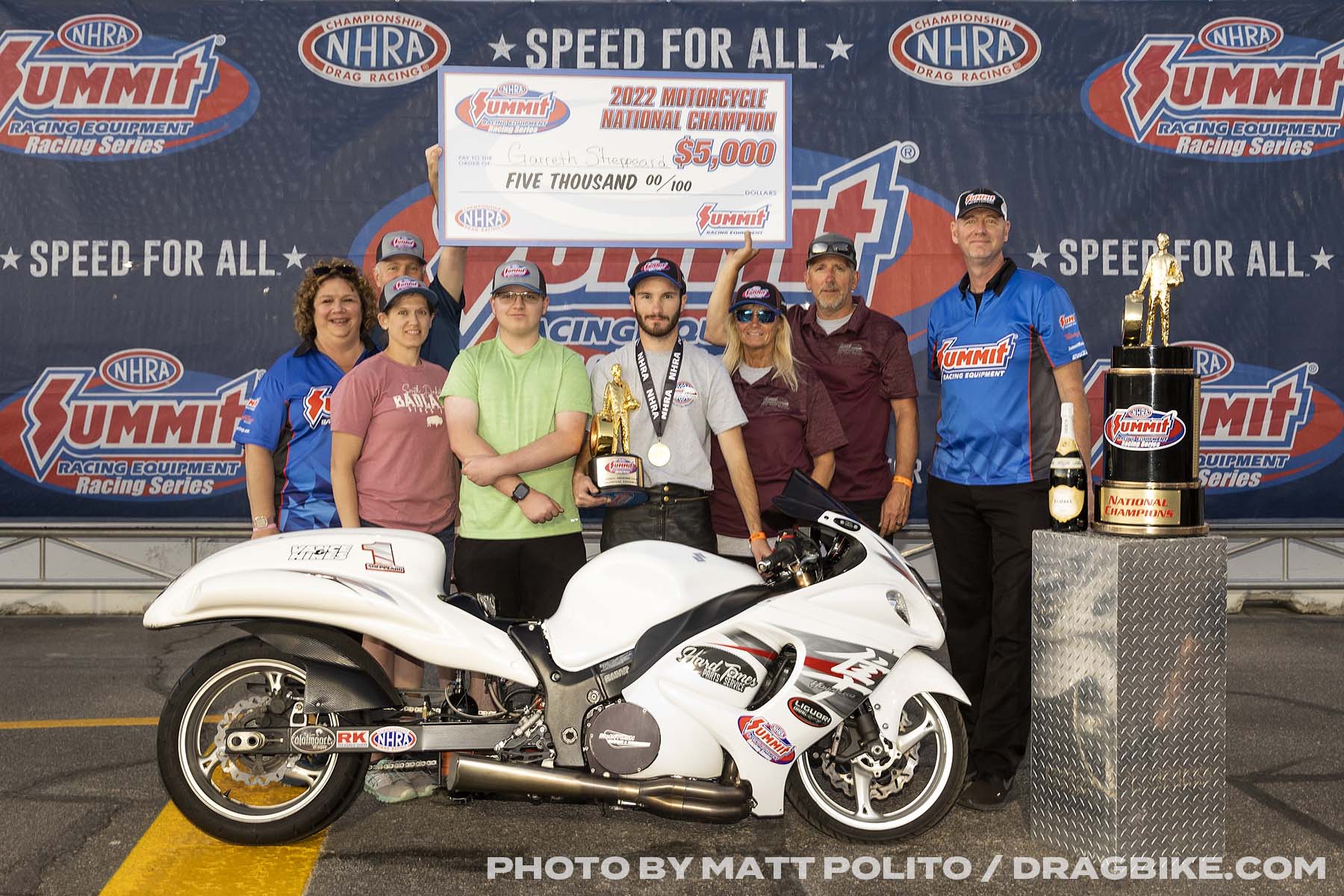 Sheppeard, out of Springfield, Ohio, rode his Division 3-based Hayabusa to a final-round victory over Division 2’s Dalton Markham. Sheppeard turned on the win light with an 8.120 on his 8.09 dial while Markham broke out with a 9.147 on his 9.20 target. 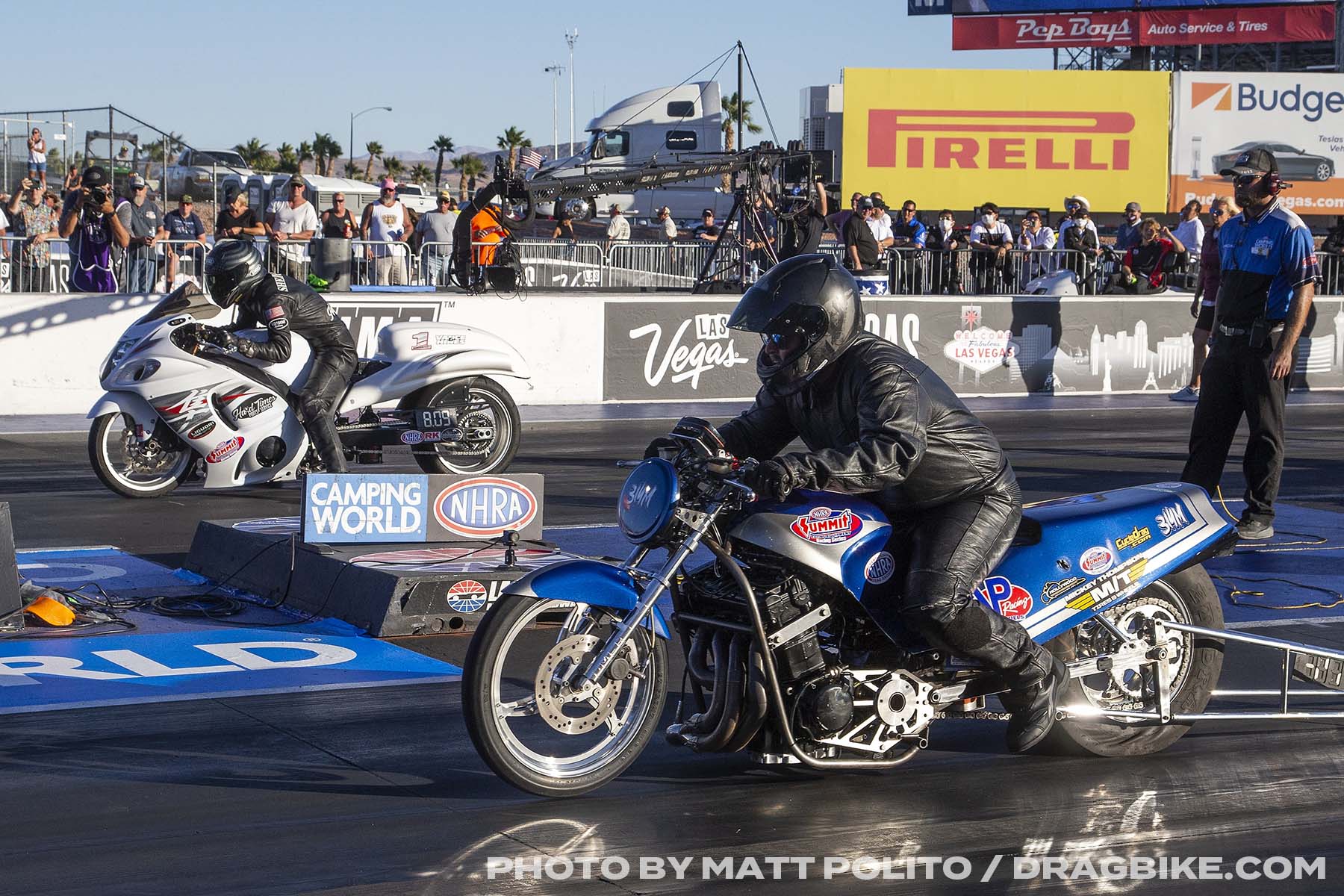 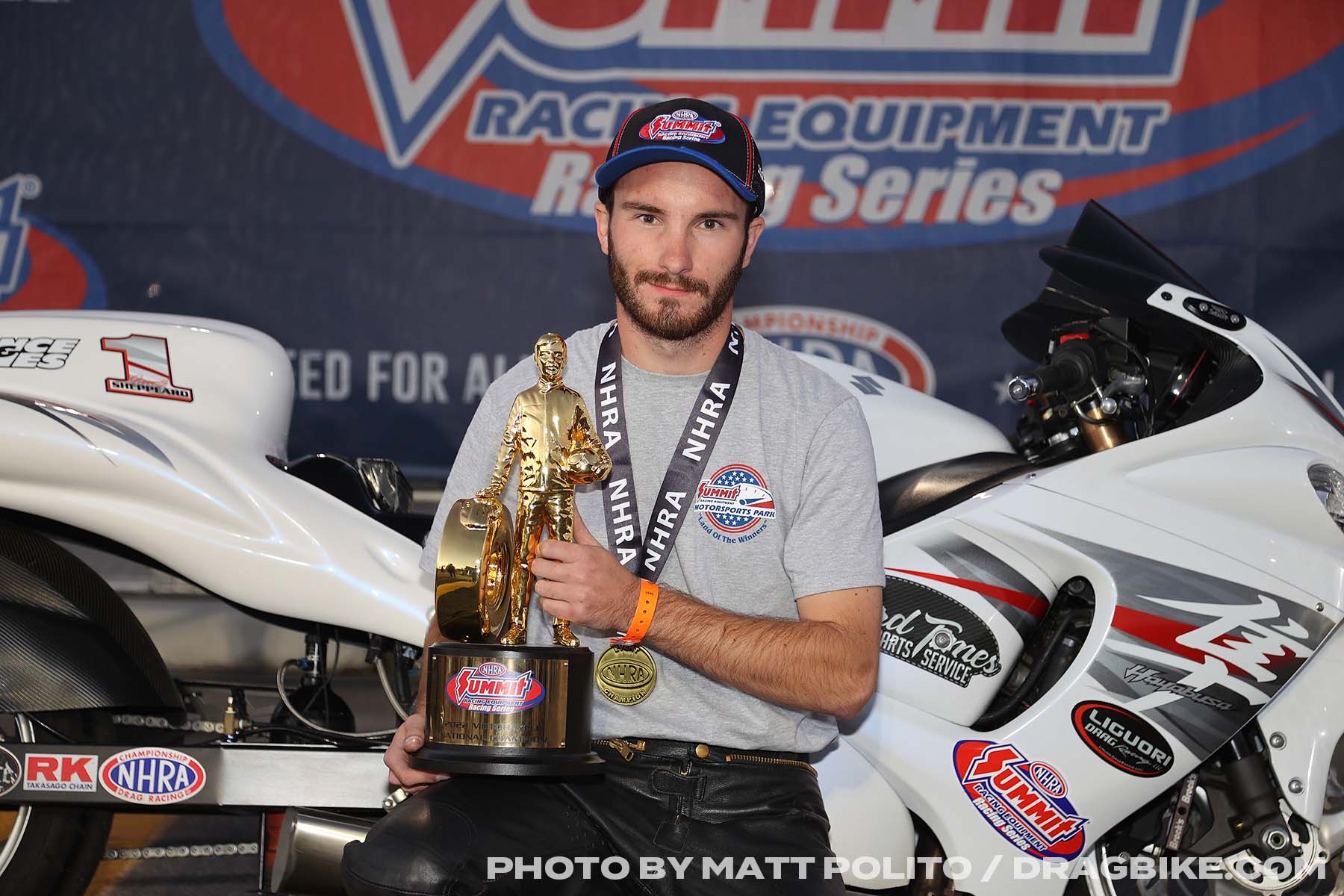 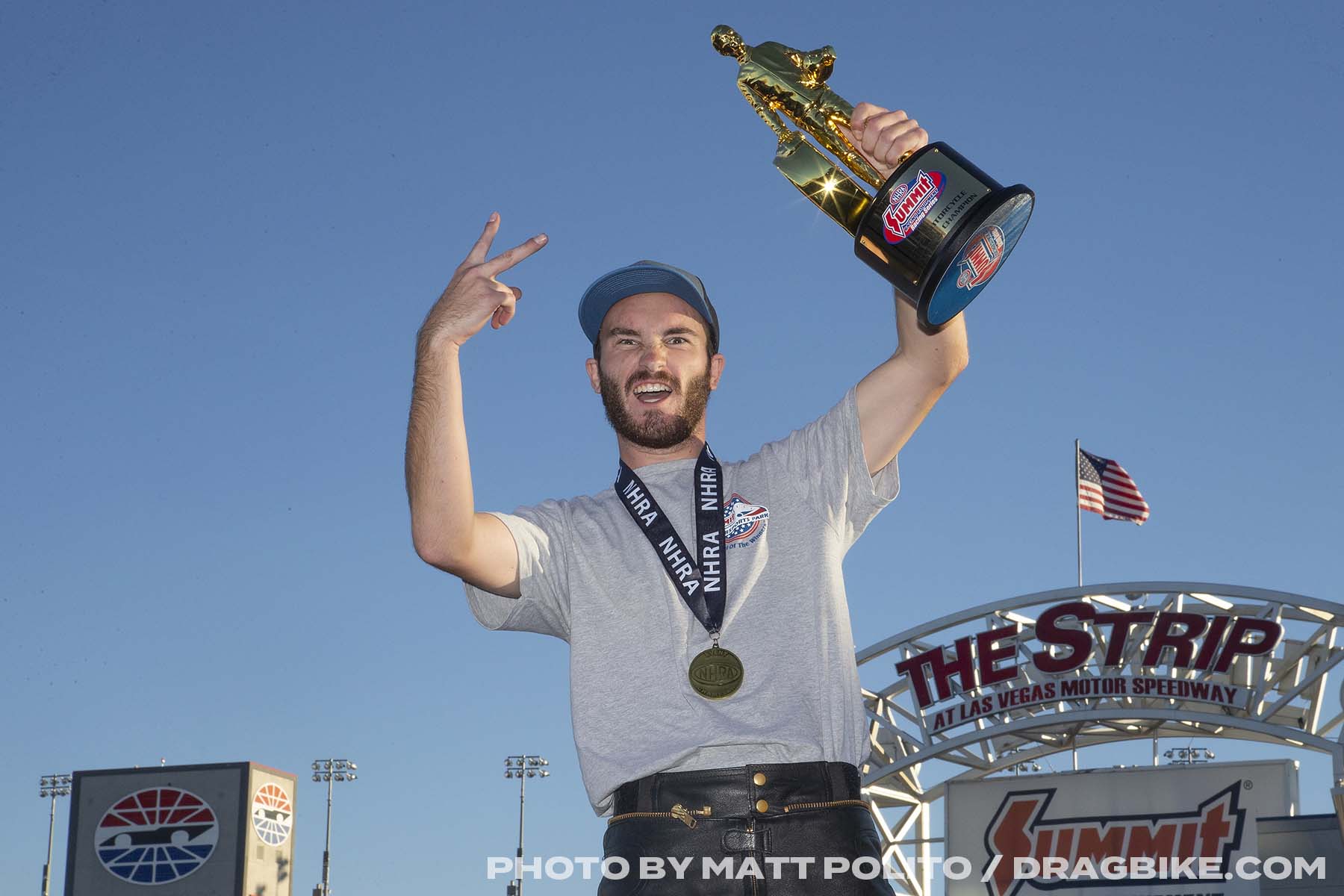 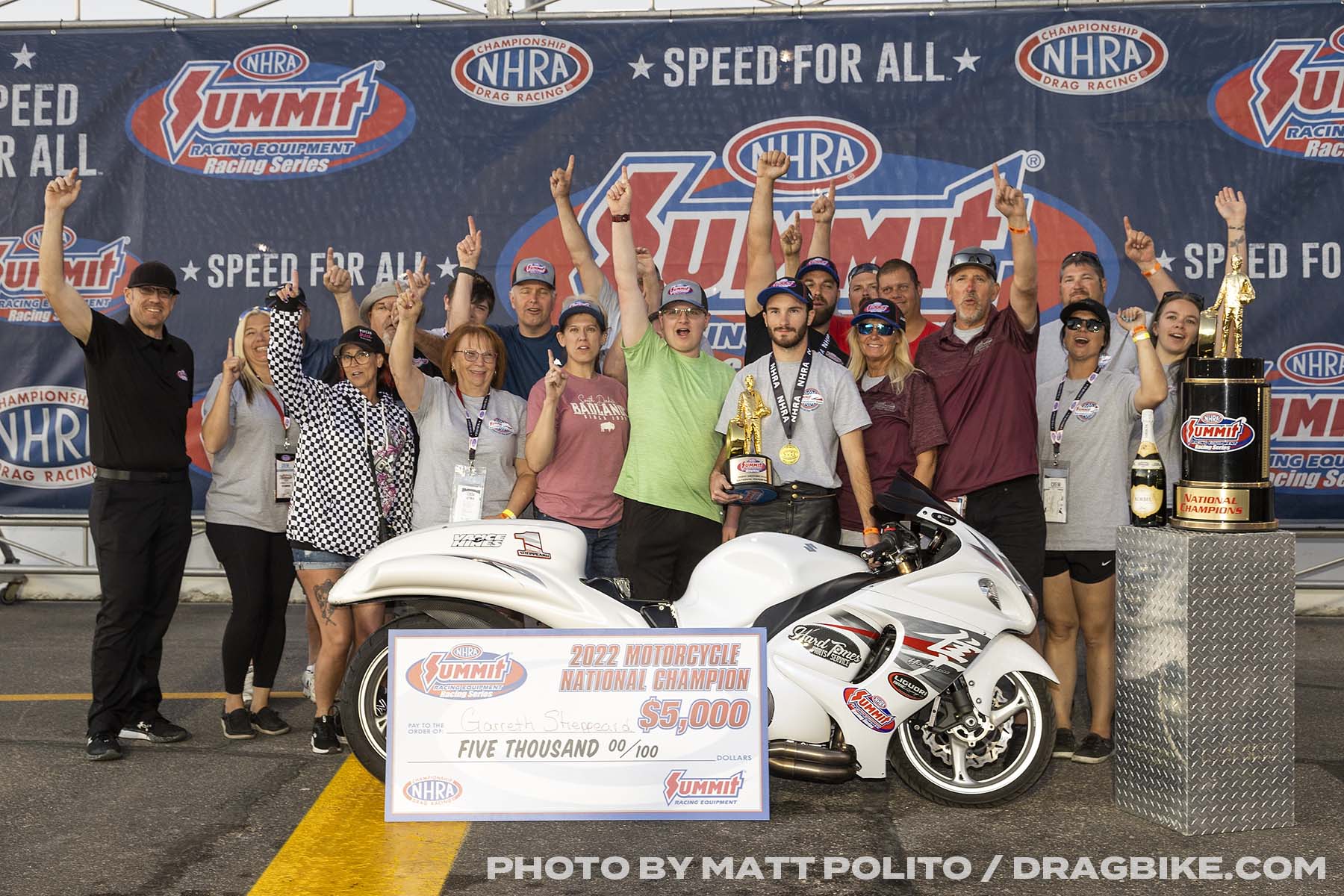 Summit Racing Equipment, an industry leader in the distribution of auto racing parts and equipment through catalogs and the Internet, is the primary sponsor of the NHRA E.T. drag racing series.

The NHRA Summit Racing Series is contested across North America forms the world’s largest motorsports program in terms of racer participation. The bracket racing format allows drivers in many types of vehicles, including dragsters, roadsters, sedans, and coupes, to compete on an equal basis against each other. In addition to three categories of competition for cars, a motorcycle category is featured.

Participating NHRA member tracks across North America host regularly scheduled events and award points. At the end of the season, each track selects a team of racers from among its top points finishers to represent the track at the divisional Summit Racing Series Finals. Competitors, running in different categories based on performance, race until a champion is crowned in each category. Points totals also are tallied for team honors.

Division champions in Super Pro, Pro, Sportsman, and Motorcycle receive a division champion’s trophy, jacket, and purse. They then advance to the NHRA Summit Racing Series National Championship at the Dodge//SRT NHRA Nationals Presented By Pennzoil in Las Vegas, where they receive $3,000 travel money for attending the event in Nevada and compete for a lucrative Summit prize fund, the national championship trophy, and jacket and contingency awards.

The commitment by Summit Racing was a huge boost to the Sportsman series, which has long been the backbone of drag racing. The sponsorship more than doubled the financial commitment to the series, including a record increase in cash payouts and awards, and features the national championship in four categories. Summit Racing has expanded the member track participant kit and developed extensive programming for both consumers and enthusiasts designed to increase visibility for the sport on a national level. Internet components and links to Summit Racing (www.summitracing.com) and NHRA (www.NHRA.com) websites are part of the initiative to increase racer participation.

As many as 80,000 racers participate in the NHRA Summit Racing Series; it is the largest organized series in drag racing nationwide.

“Many racers can’t travel across the country to participate in the professional drag racing circuit,” said Jeff Winters, Summit Racing marketing manager. “The NHRA Summit Racing Series gives weekly Sportsman racers an opportunity to be more than a champion in their division — they have a shot at winning a national championship. There are racers in the series who would otherwise not be able to compete at such a level, and we’re happy to support such a program.”

NHRA has featured an E.T. drag racing series since the mid-1970s. It provides even and exciting competition for the local racer, the backbone of NHRA.

Founded in 1968, Summit Racing Equipment is the world’s largest mail-order and Internet supplier of performance automotive and truck equipment. Headquartered in Tallmadge, Ohio, the company has retail stores and distribution centers in Tallmadge; Sparks, Nev.; and McDonough, Ga.