Gladstone wrapped up a perfect weekend in Pro Stock Motorcycle, going 6.876 at 195.59 on his J&A Service Suzuki Hayabusa to knock off Eddie Krawiec in the championship round. It gave Gladstone his second straight – and second career – victory in the class as the young standout made the quickest run of every single session in both qualifying and eliminations.

After a dominant performance in qualifying, Gladstone didn’t let up on raceday, knocking off David Barron and Angie Smith to set up the final with Krawiec. He denied Krawiec his 50th career win, making his seventh straight run in the 6.80s to finish off a remarkable weekend in style. He also took over the points lead on Saturday and pushed it to a 64-point lead over Angelle Sampey with his stellar showing in eliminations as Pro Stock Motorcycle appeared in Topeka for the first time since 1997.

“This is what dreams are made of,” Gladstone said. “I’m just so thankful and so proud of this team. They’re so awesome and this is unbelievable right now. Our guys gave me a perfect bike this weekend and we kind of lucked up into a tuneup. We put something that we thought would be close and we nailed it. We just had to make small adjustments to it, and I just had to keep doing my thing. It’s taken quite some time to do this, and these are extremely difficult to ride correctly. My tuner is doing a terrific job and to be doing it in this style, it’s so cool.” 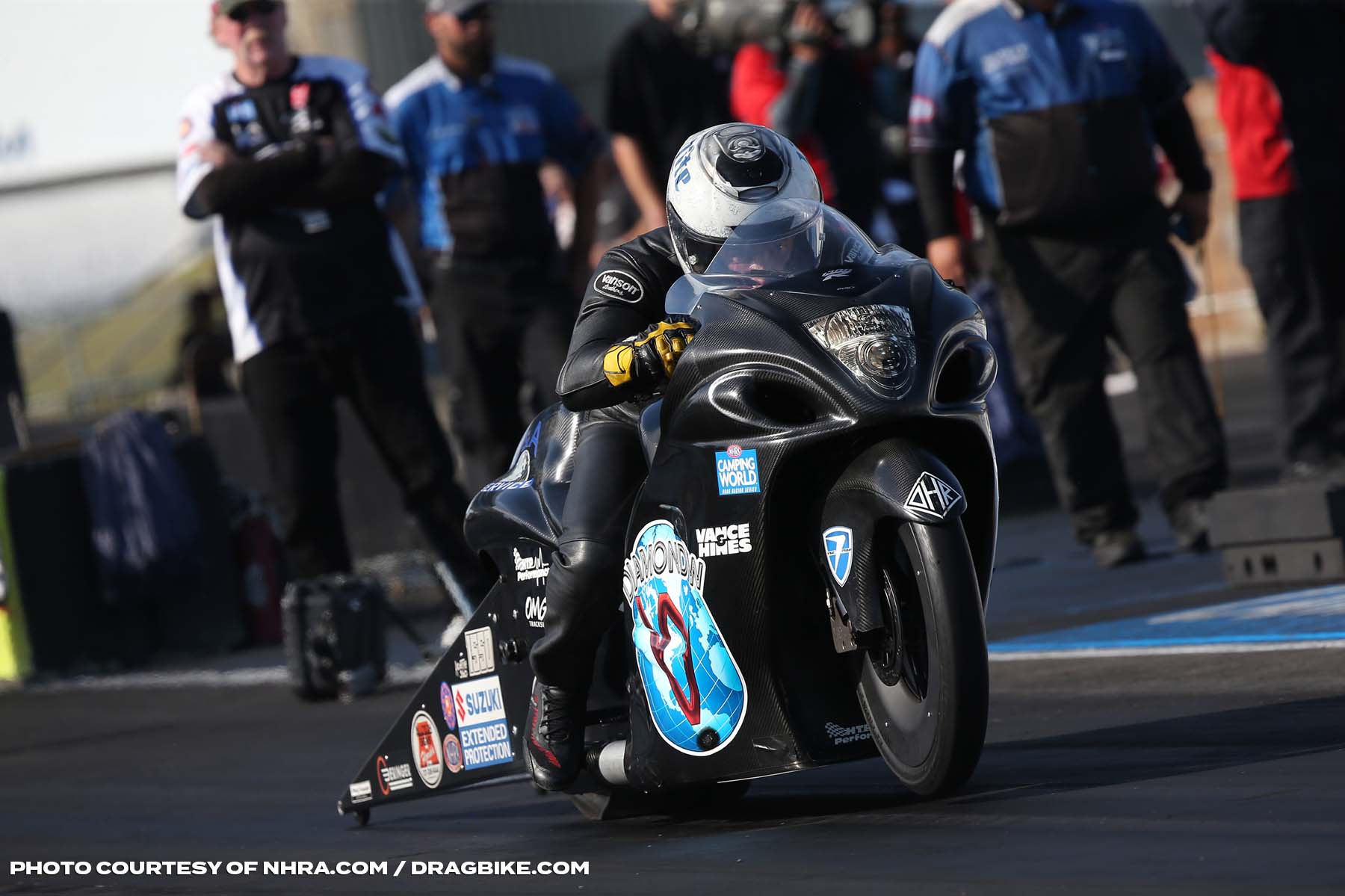 Krawiec came up short against Gladstone in the final round for the second straight race, but he did move to third in points by defeating Ryan Oehler, defending world champ Matt Smith and Jerry Savoie. It’s also his 91st career final round. 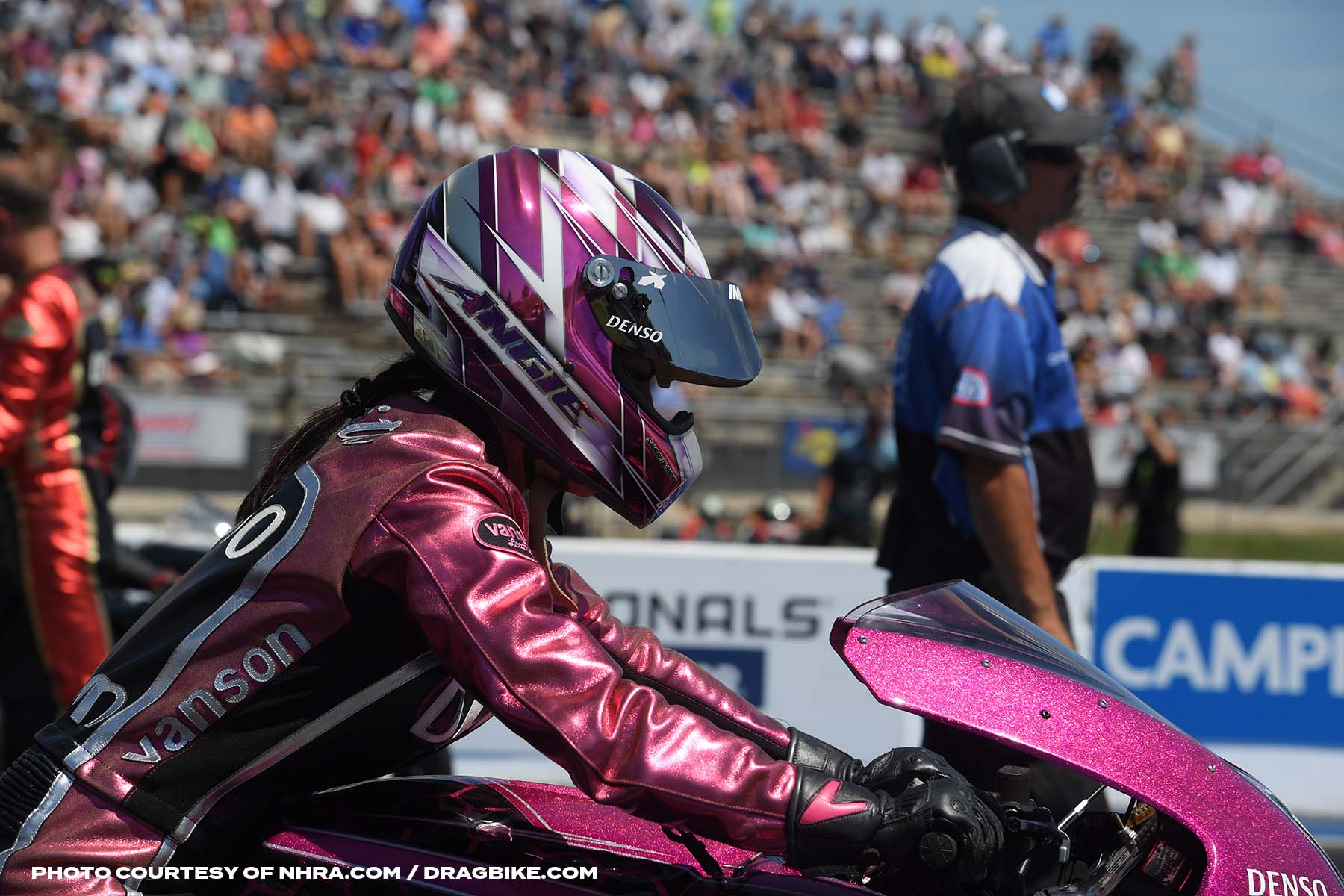 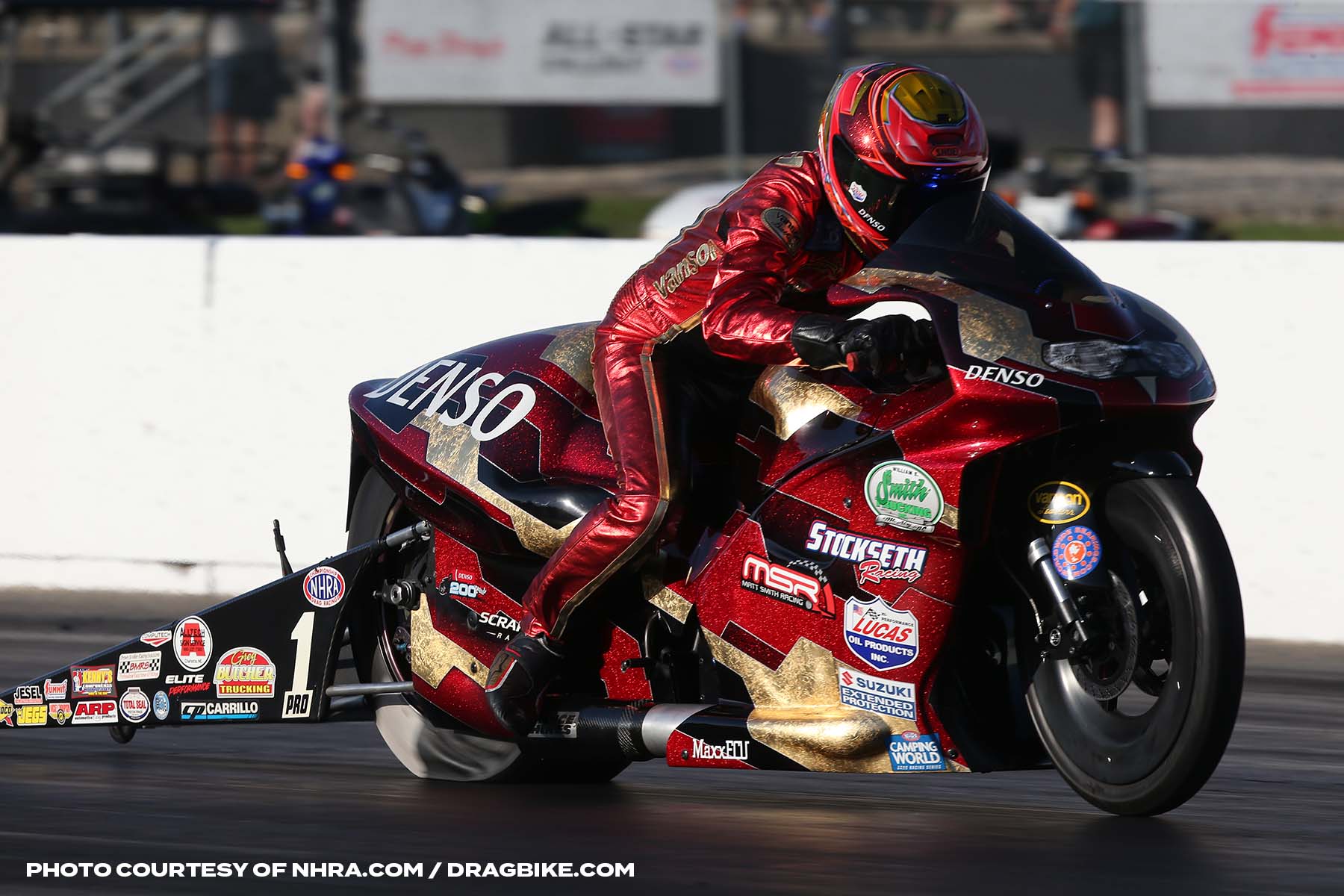 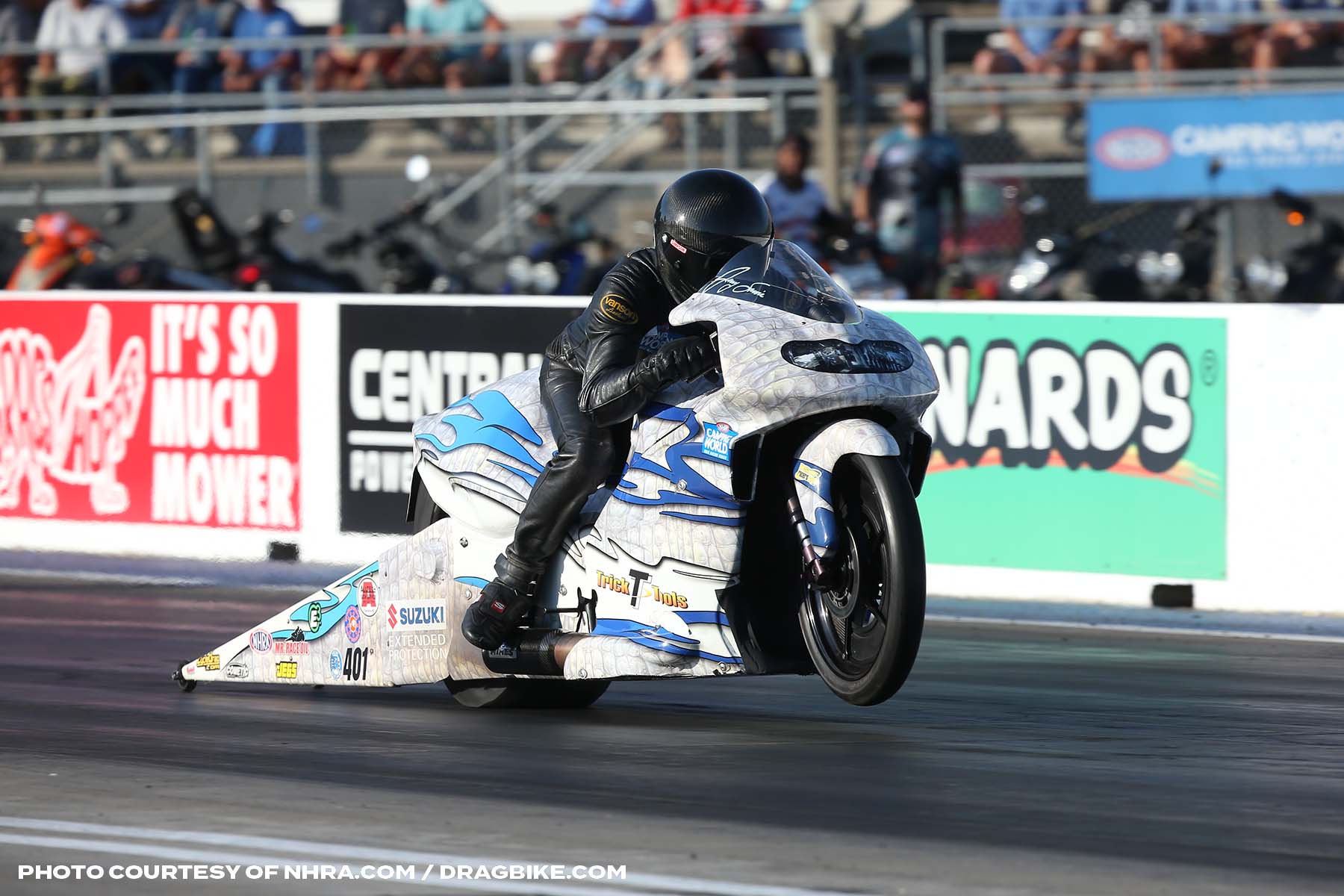 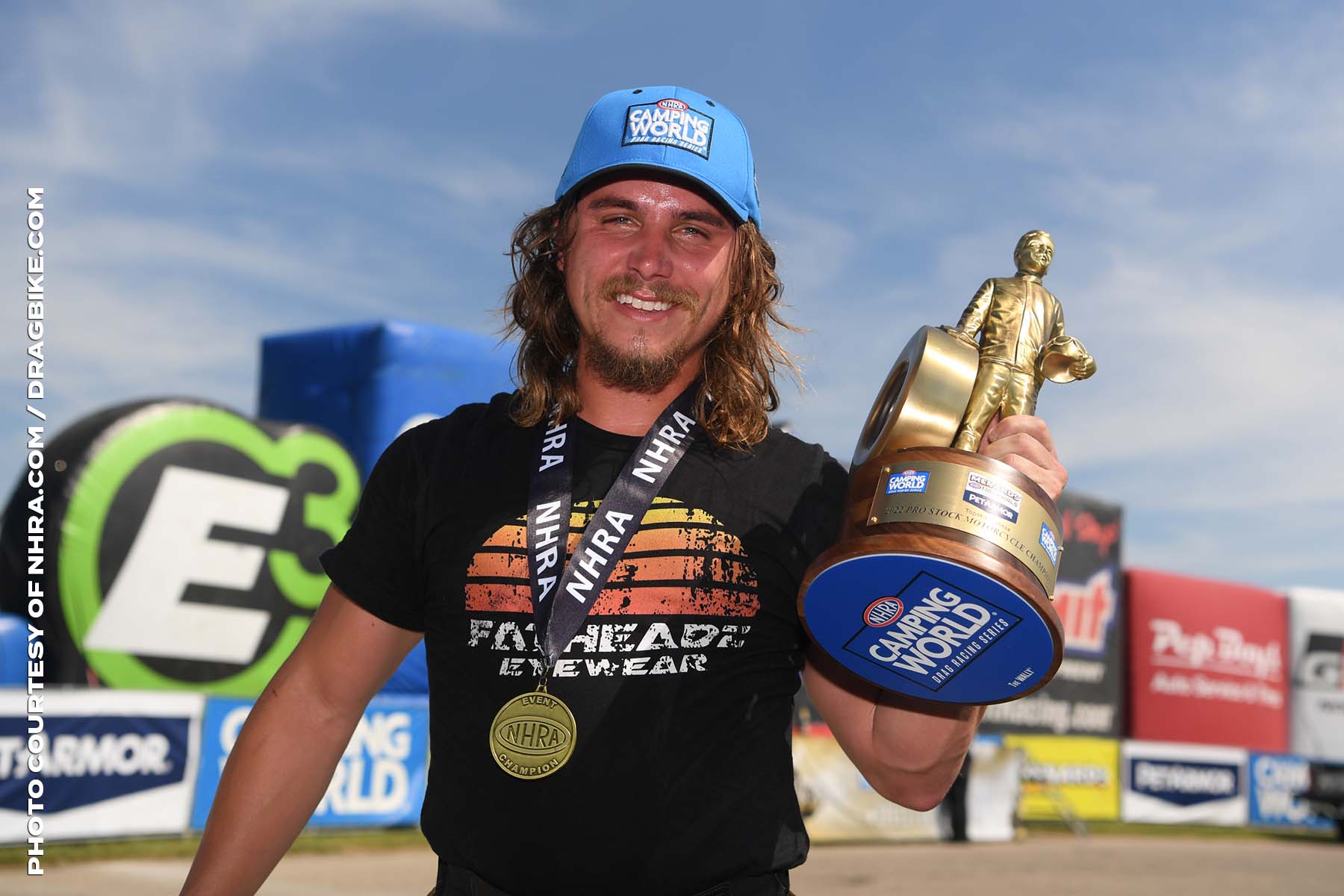 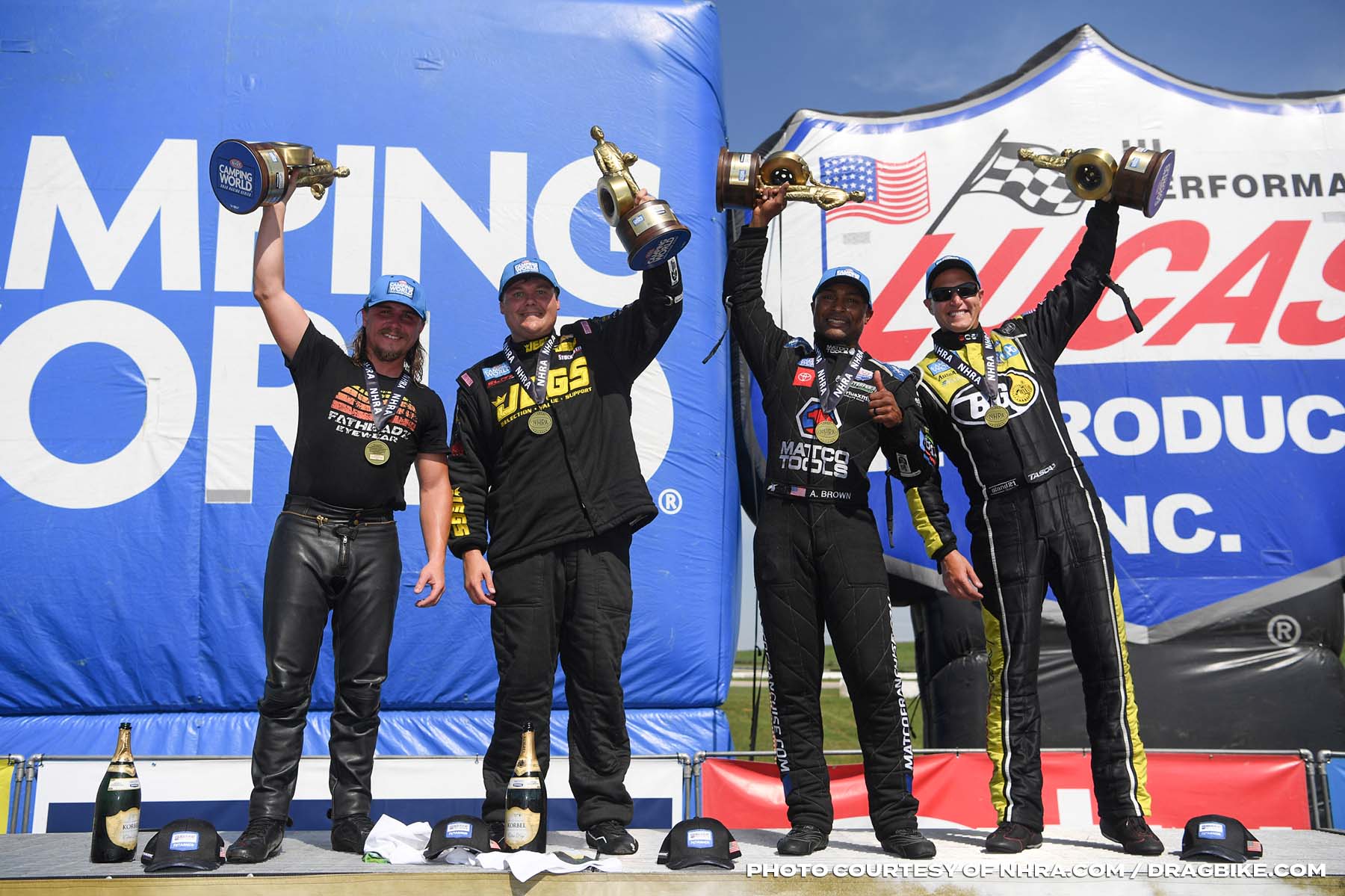 Gladstone earned his first career No. 1 qualifier in Pro Stock Motorcycle, as his outstanding run of 6.831 at 195.08 on his J&A Service Suzuki Hayabusa easily held up through two rounds of qualifying on Saturday. But Gladstone also impressed in those two sessions on Saturday, dipping into the 6.80s each time and making the quickest run in each qualifying session. Coming off his first career victory in the class, three impressive runs in qualifying gives him plenty of momentum heading into eliminations. He’ll also start raceday as the points leader, slipping past Angelle Sampey with his standout performance over the past two days. 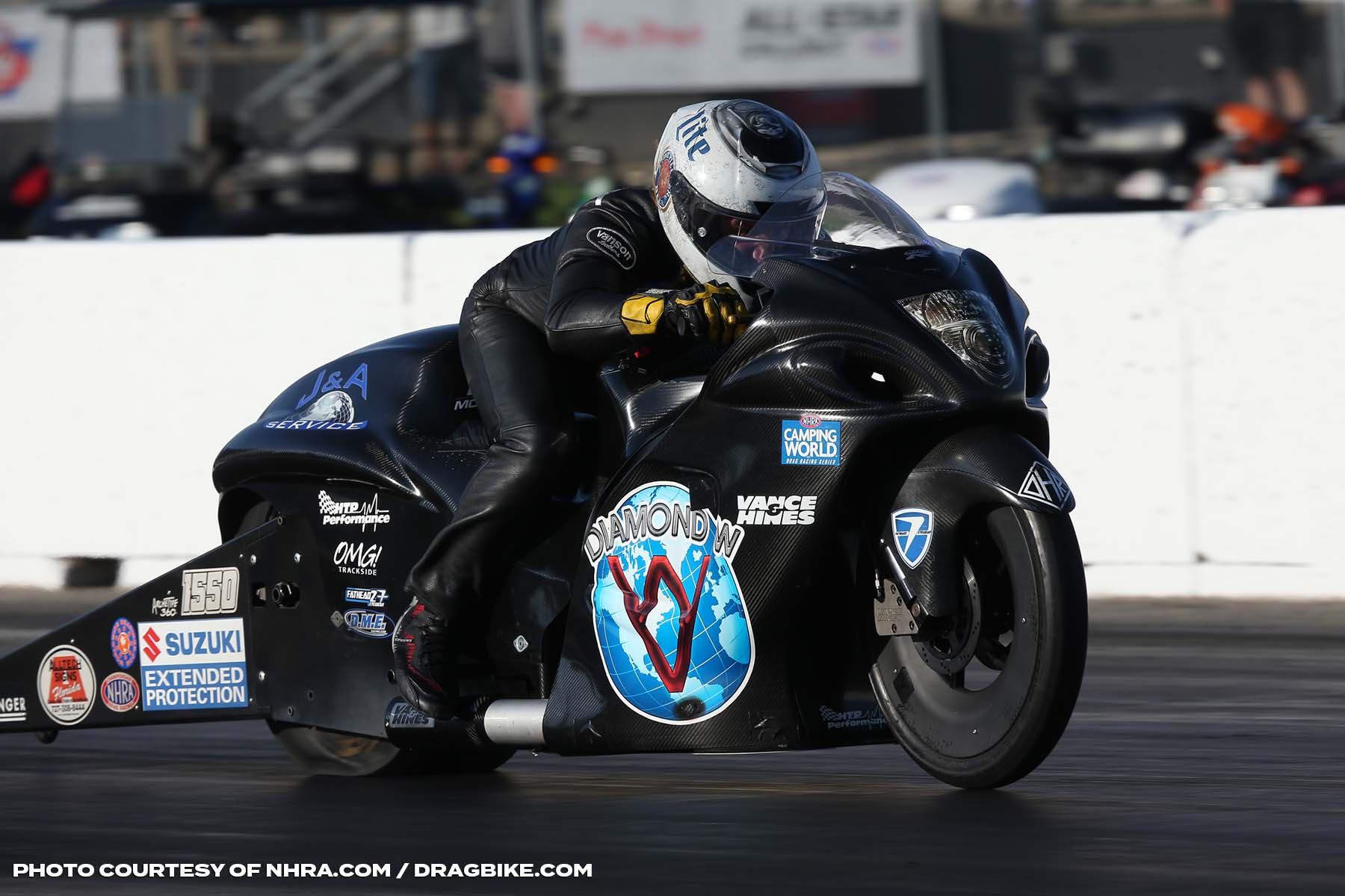 “I hope this wave never crashes,” Gladstone said. “I’m enjoying this ride while it lasts and I’m so happy. I’ve been waiting my whole life for moments like this and I can’t say enough about my team and how much fun we’re having. They’re so great and I’m so thankful for all they do and allowing us to come out here.” 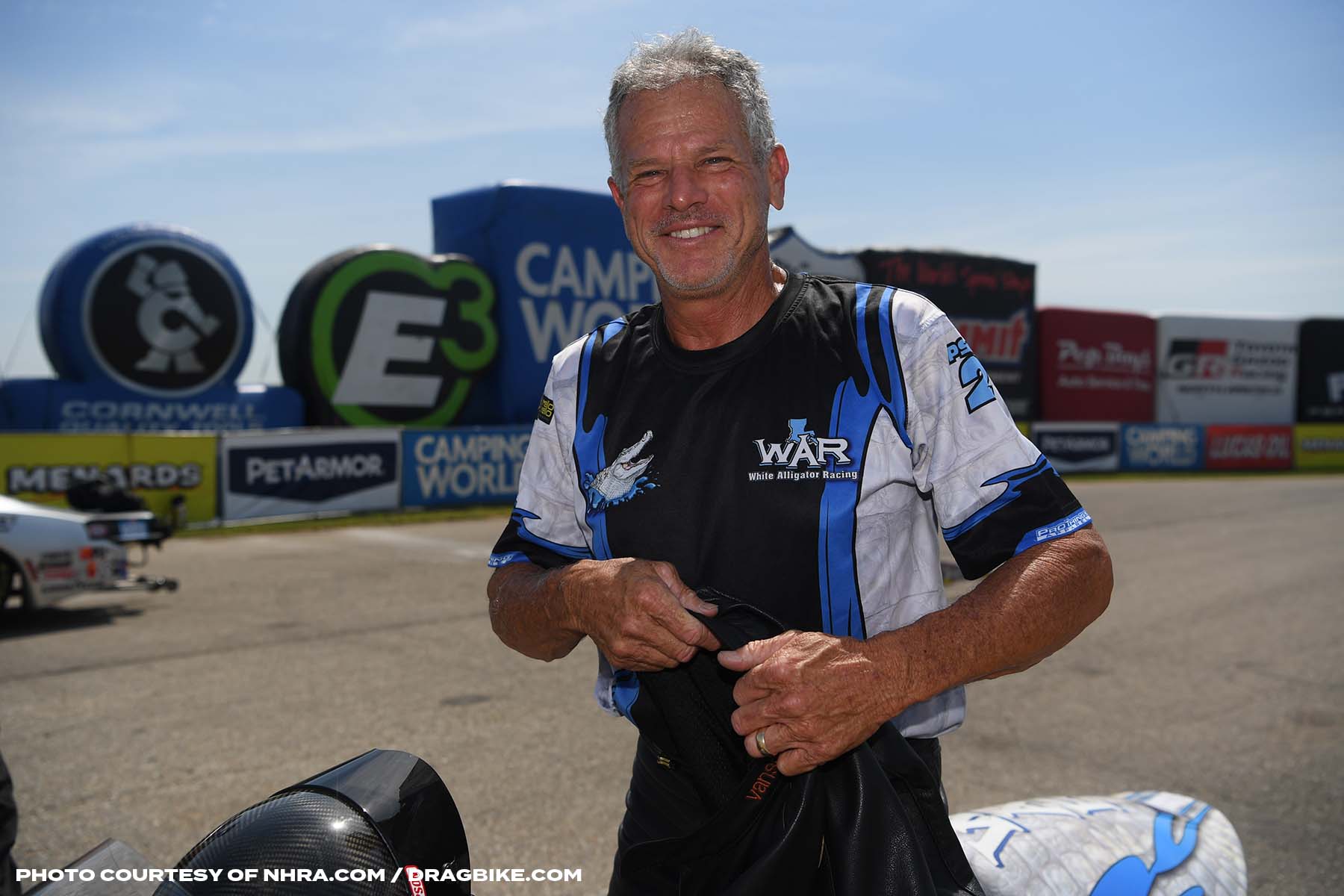 A race after picking up his first career Pro Stock Motorcycle win, Gladstone is now on track to pick up his first career No. 1 qualifier in the class thanks to a stellar run of 6.831 at 195.08 on his J&A Service Suzuki Hayabusa. That run gave Gladstone a significant advantage over the rest of the field, including points leader Angelle Sampey, who went 6.882 at 195.14 in the pairing with Gladstone. Beyond that, no other rider reached the 6.80s, as Gladstone put on an impressive show on Friday. It is his first appearance at Heartland Motorsports Park in Pro Stock Motorcycle – and the first for the class since 1997 – and Gladstone showed no let-up following his Sonoma win.

“The run felt really good, and this is a new track for most people in the class,” Gladstone said. “I didn’t really know what to expect, but it was good down low to put a (good) number down. We made a call as a team and it worked out, and that feels pretty good. (The win) proved to me that I could do it, but now it gives you some nerves being up high in the points. This whole facility is so cool and it’s awesome. It’s a unique place and I really like it so far.” 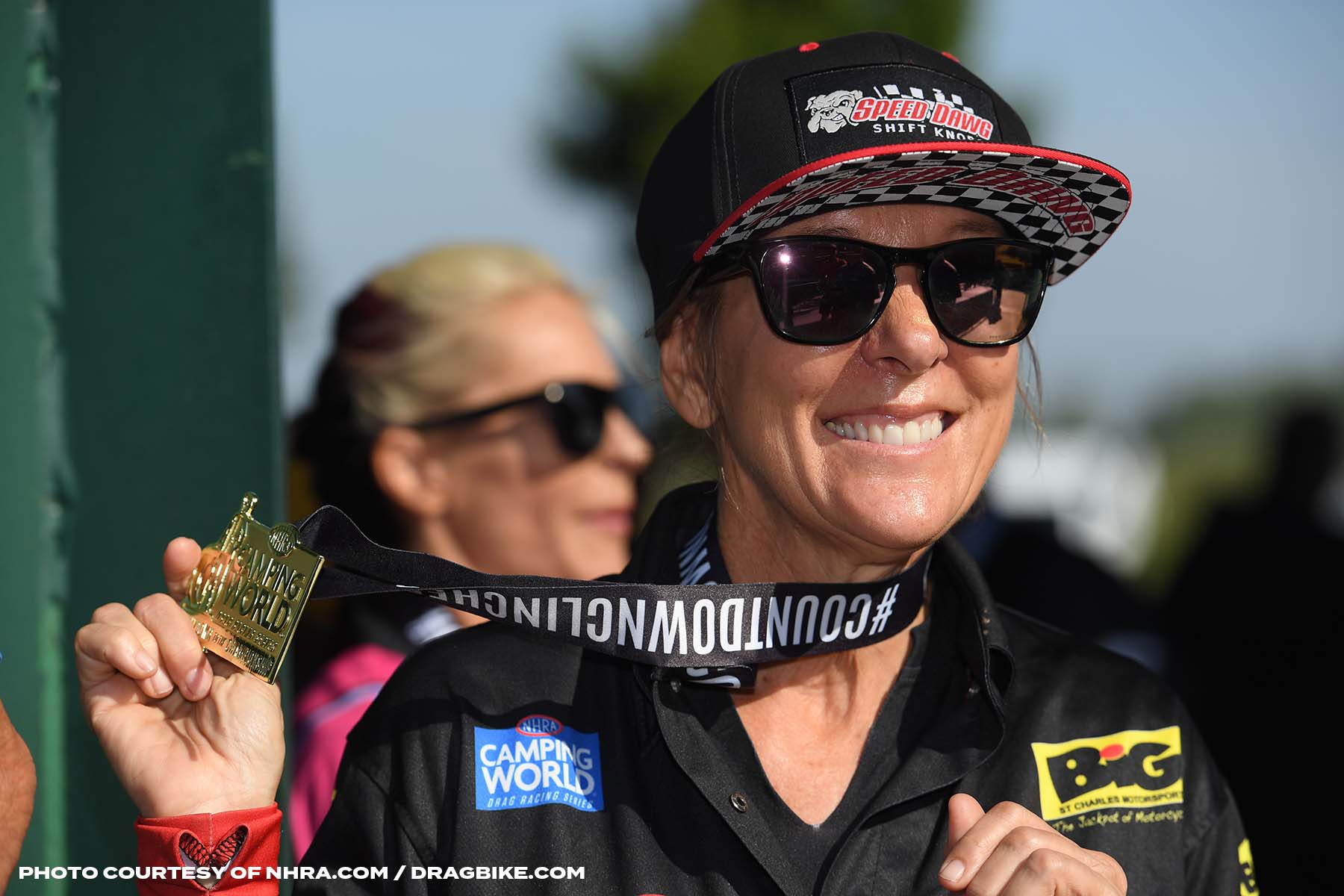 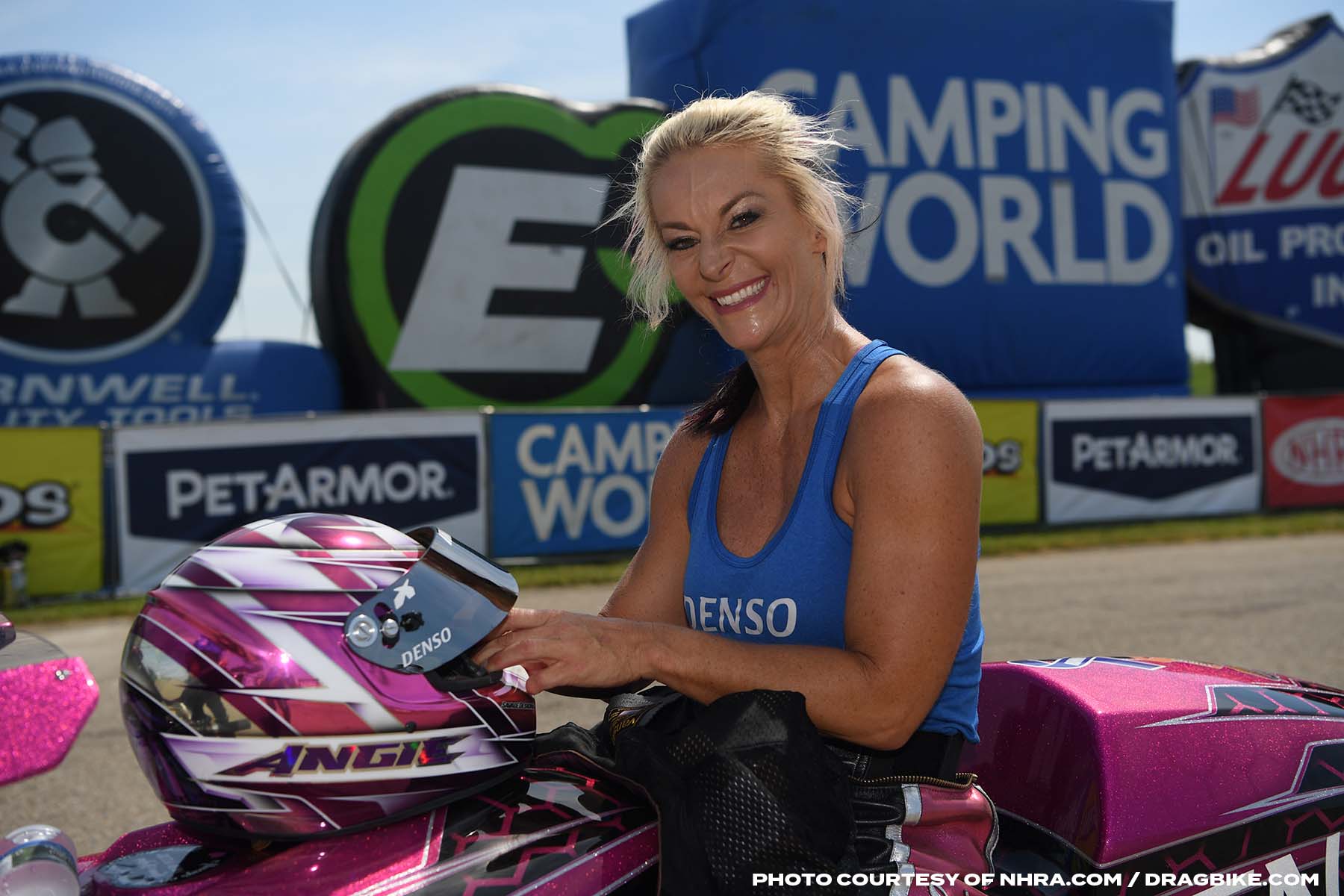