Hector Arana Jr. is still looking for his first win of 2019, but signs are starting to show that it’s coming.

Many of the heavier EBR-bodied motorcycles are struggling to find gains in the 60-foot areas, but don’t count the Lucas Oil TV bike ridden by Hector Arana Jr. among them. The rider boasts the best 60-foot time in Pro Stock Motorcycle in 2019, yes, even better than the lightweight Suzuki motorcycles, over the four-plus races contested with a 1.072-second average. 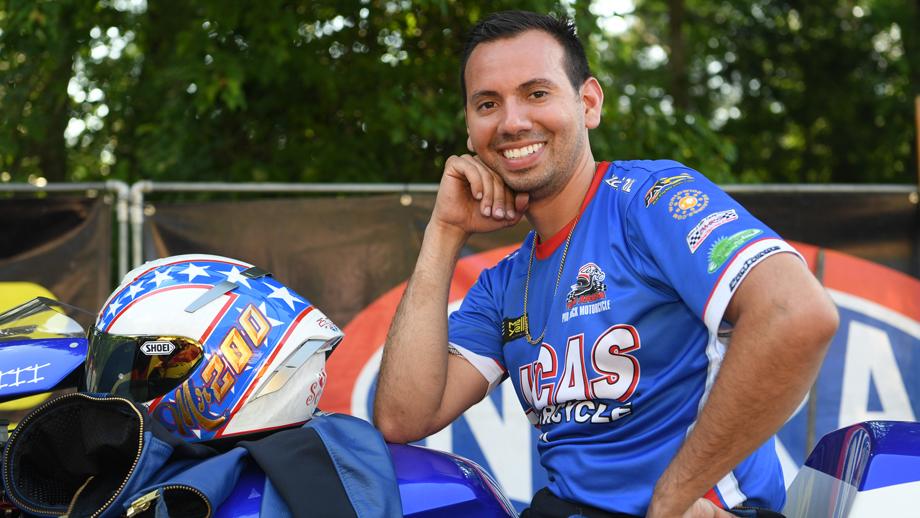 It’s close. Jerry Savoie is only a thousandth behind and Andrew Hines, who dropped a 1.04-second 60-foot on the class during Saturday qualifying averages a 1.074. But Arana has been good all season, perhaps in part because he’s had the EBR the longest of anyone in the field (to recap: Matt Smith, Angie Smith, Scotty Pollacheck and Ryan Oehler also ride this generation EBR).

“We were able to add ballast to certain areas on the bike so that we were able to 60-foot better as well,” he said of the 15-pounds added to EBRs, Buells and the Harley-Davidson motorcycles after Gainesville. “I’ve had good 60-foots before, so… yeah I am surprised (that we’re this good), but now my problem is that we’re not getting to that next area as quickly.

“I gotta work on getting the bike to transition to the 330-foot area. I’ll run a good time but based on the 60-foot it’s not putting the number up that it should.”

It’s worth noting his motorcycle isn’t bad in the second incremental. It’s just not as good as the Harley-Davidson duo, which creams the competition there. Arana ranks fifth, behind Hines, Krawiec, Ryan Oehler and Angelle Sampey. As much as Oehler has struggled to get to 60-feet on time, it’s a nice feather in his cap that he’s made the transition from one to the other so well – but that’s another story.

Arana’s numbers all over the board are eerily reminiscent of 2017, when he looked poised to break out at any moment but was consistently held down by a great year from the Harley-Davidson duo. Arana averages a 6.883-second elapsed time, which is competitive, gets down the track more than anyone other than Krawiec, and his only true road block this season has been reaction times. That probably won’t last either – he’s averaged a .049-second reaction time over the last three years and will probably find his way back there.