When Jerry Savoie started his Pro Stock Motorcycle career, he had only one specific goal: to win a race in the class.

Then, in St. Louis last year, Savoie accomplished that goal, and now, in the midst of a breakout 2015 season, the Louisiana alligator farmer has to search for an entirely new list of goals. After winning the prestigious Chevrolet Performance U.S. Nationals and advancing to the semifinals last weekend in the opening race of the NHRA Mello Yello Drag Racing Series Countdown to the Championship, a world championship may be next on that list. 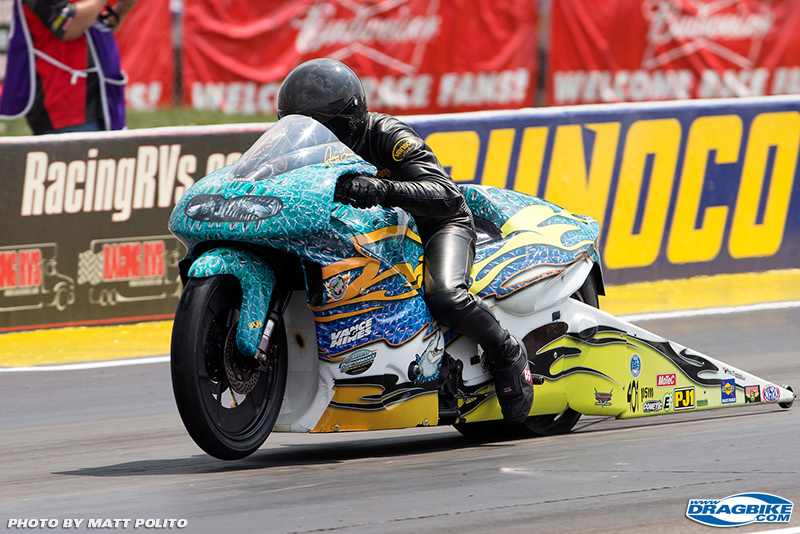 “When I first started racing I just wanted to win one race and that’s all I had on my bucket list,” Savoie said. “To now have three career wins and a bike capable of winning any weekend is a pretty good feeling. As far as a championship, if it comes my way I’ll certainly take it, but I’m trying not to be too focused on it. We know we can do it if things work out. We’ve got a chance to do some damage.” 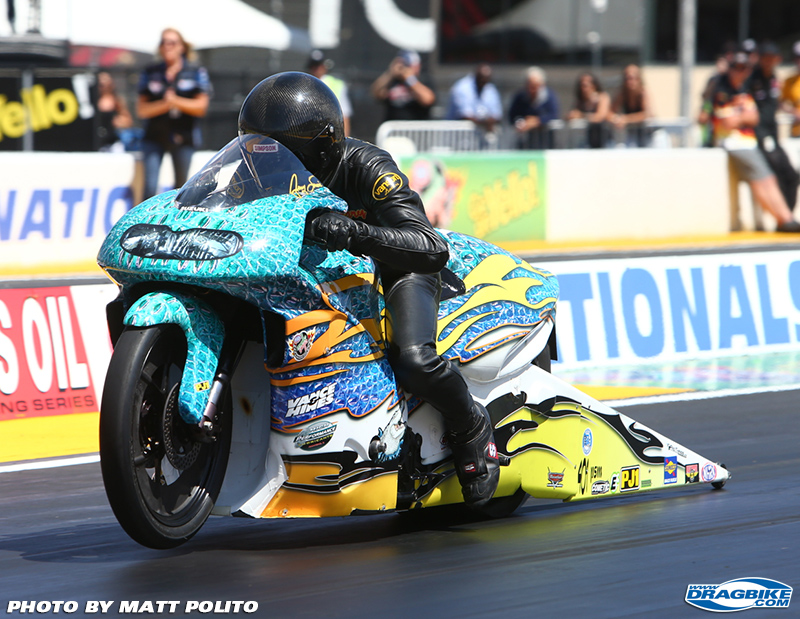 Savoie sprinted into the Championship conversation this year even though he hit a few speed bumps early on in the season. After a pair of first-round losses to open the season, Savoie failed to qualify at the NHRA Four-Wide Nationals in Charlotte, leaving him 15th in points. Things quickly picked up from there, as Savoie qualified second and won in Englishtown, but he admitted there was some trepidation in returning to Charlotte last weekend to kick off the Countdown to the Championship.

“From the beginning of the year to now, it’s pretty amazing how far we’ve come,” said Savoie, who qualified second and advanced to the semifinals last weekend. “We didn’t even qualify last time and then we were nearly the No. 1 qualifier. We have it going on and we know it. We have three really good engines from Vance & Hines, and we’re just consistent right now. If we can keep that up maybe we can give everyone a run for their money.”

Savoie is in the process of doing just that as his laid-back demeanor suggests he isn’t about to let the pressure get to him over the final five races. Savoie and his team have put together a run of strong performances, also finishing as the runner-up in Sonoma before the win in Indianapolis. 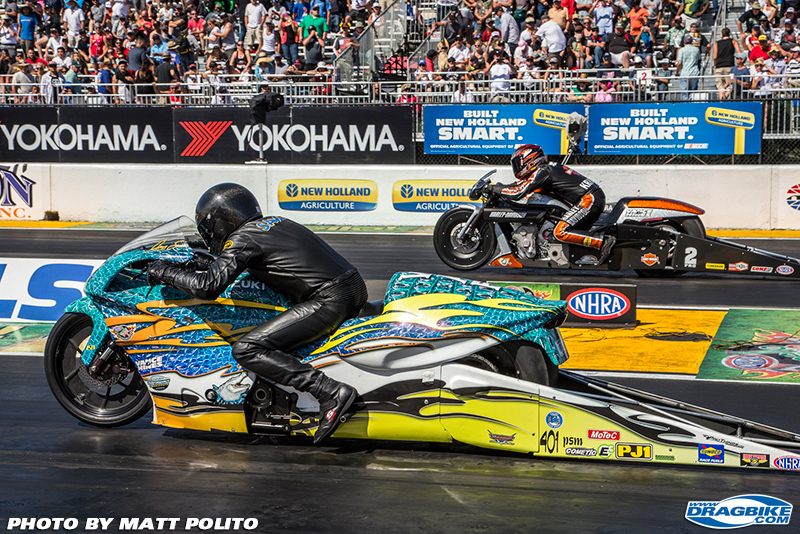 The Indy win earned Savoie “160-something texts from friends and family,” boosting his confidence heading into the Countdown, and with last year’s victory in St. Louis, Savoie will take plenty of determination into Gateway Motorsports Park.

“I keep trying to focus on doing a better job as a rider,” Savoie said. “We’ve been pretty stout since Englishtown and it’s going to be good in St. Louis. We won there last year and we know if it’s hot what tune-up we need. We’ll give it a run for the money.”

Looking to keep Savoie at bay will be teammates Andrew Hines, the reigning world champion and current points leader who won in Charlotte to open the Countdown, and Eddie Krawiec, who entered the six-race playoffs as the points leader before a second-round defeat at zMAX Dragway. 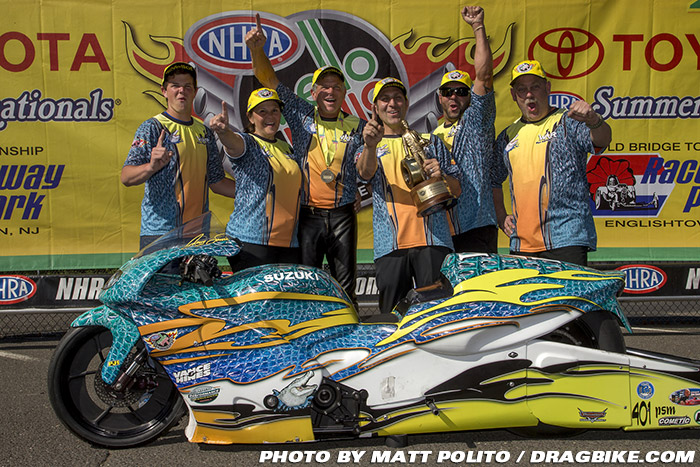 Other top contenders include Matt Smith, who jumped to fourth after a final-round showing in Charlotte, Hector Arana Jr., Hector Arana, Jim Underdahl, Karen Stoffer, Scotty Pollacheck and Chip Ellis; but Savoie likes his chances and praised a team that has stuck together in impressive fashion throughout the 2015 season.

“We’re having fun,” Savoie said. “It’s really weird to go out there and know we could finish in the top five and have a chance at winning (a title). We’re having a good time and we’ve got a really good crew. There’s no bickering and we’re all thoughtful about our surroundings and having a good time. To win in Indy was a big accomplishment. We were pretty stoked and hopefully before the end of the year we can get us another (win).” 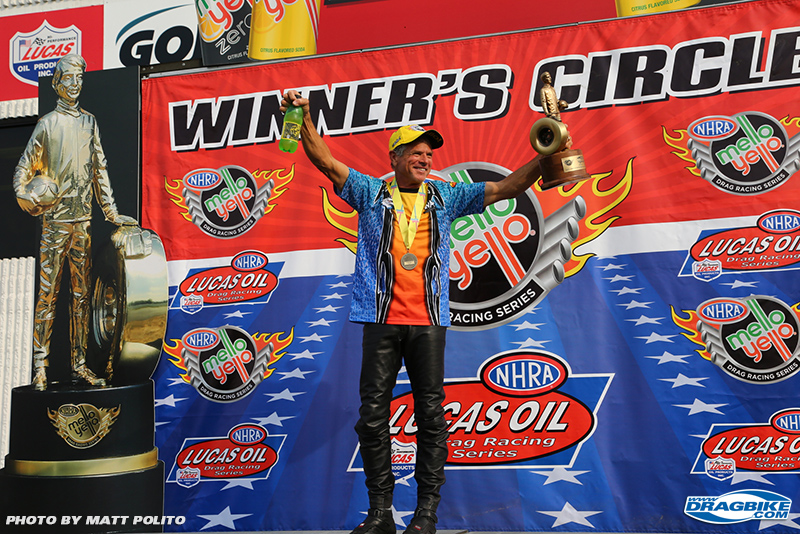