After back-to-back final round appearances, Joey Gladstone broke through for his first career victory in Pro Stock Motorcycle on Sunday, knocking off Eddie Krawiec in the final round with a pass of 6.759 at 200.68 on his J&A Service Suzuki Hayabusa. 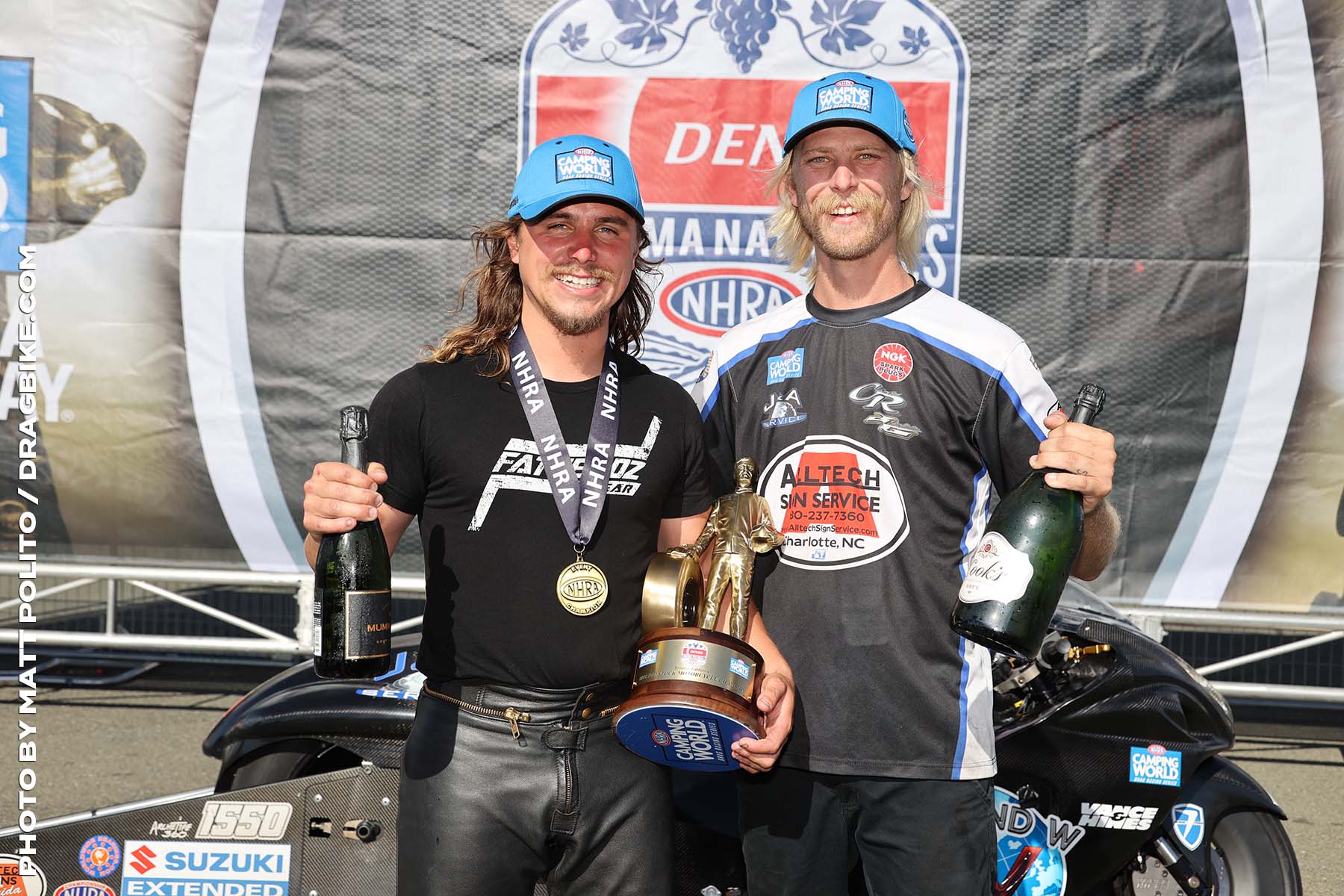 Krawiec went a quicker 6.758, but Gladstone was quicker on the starting line with a .026 reaction time and held off the veteran to claim his first win in the class. He reached the final round with wins against Jianna Evaristo, Katie Sullivan, and Jerry Savoie, going a stellar 6.735 at 202.18 in the second round. He made sure to finish the job this time, setting off an emotional celebration for Gladstone and his team.

“I’ve been waiting for this day since I was 12 years old when I decided I wanted to race Pro Stock Motorcycles,” Gladstone said. “To finally be here to do it and race the best guys in the world, this means everything to me. I just had to do my job out there. It’s been quite the road, and this means a lot and more than you could ever imagine. I’ve spent my whole life trying to get here and this is just the start for us.” 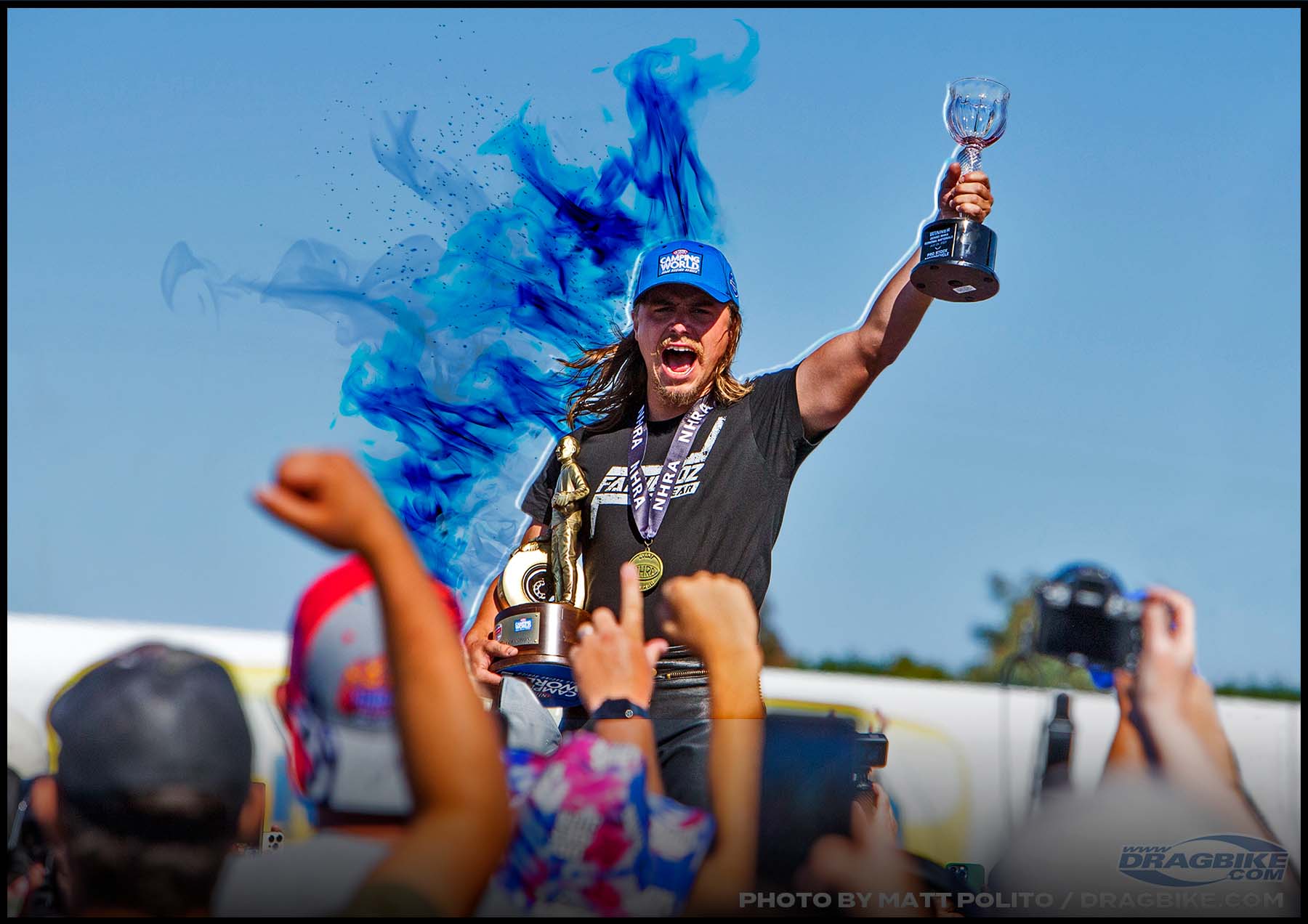 Krawiec reached his 90th career final round thanks to victories against Kelly Clontz, defending world champ Matt Smith and teammate Angelle Sampey, who now has just a two-point lead over Gladstone in the points standings. 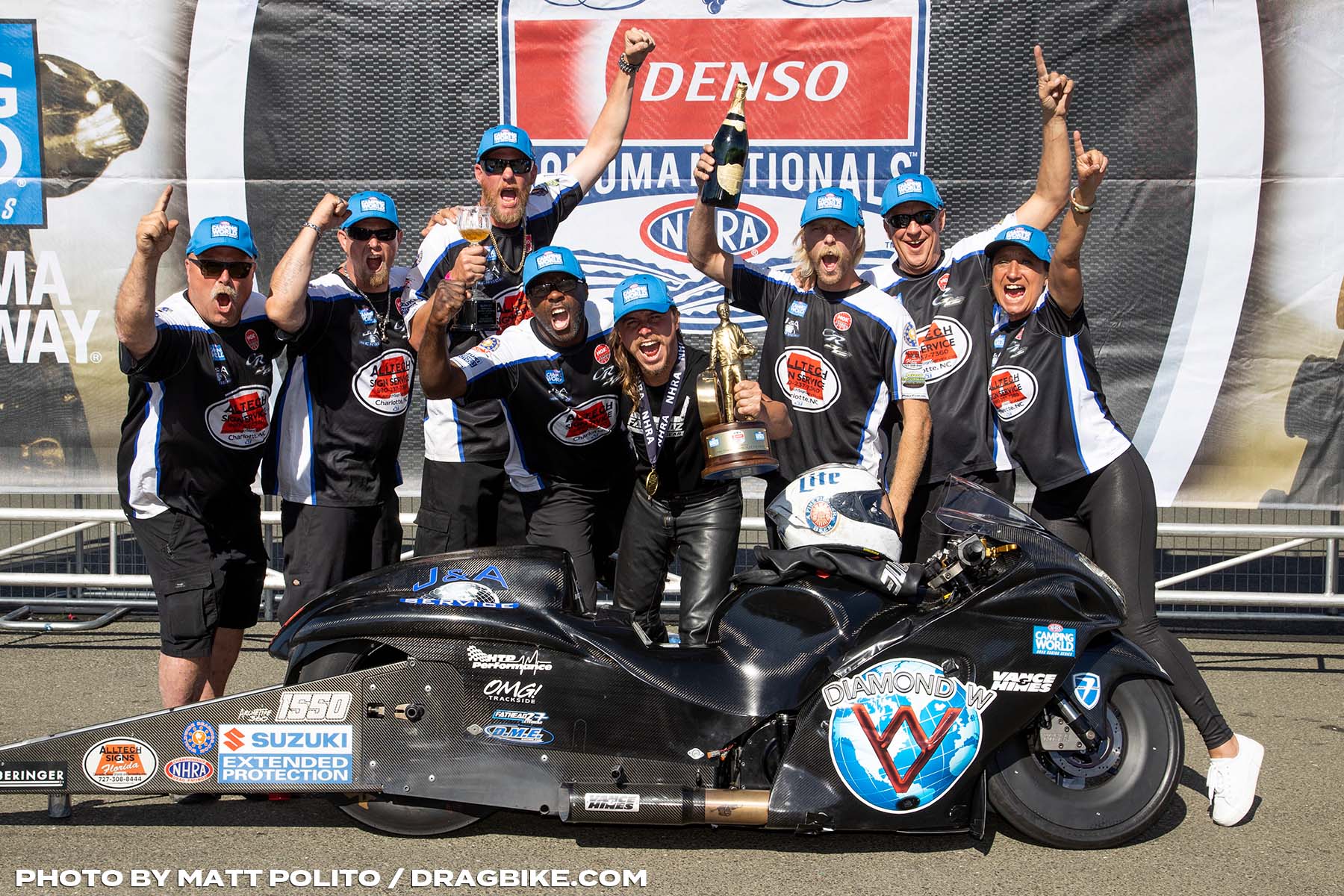 The NHRA Camping World Drag Racing Series returns to action on July 29-31 with the final race of the Western Swing, the Flav-R-Pac NHRA Northwest Nationals at Pacific Raceways in Seattle. It is the first race at the track since 2019. 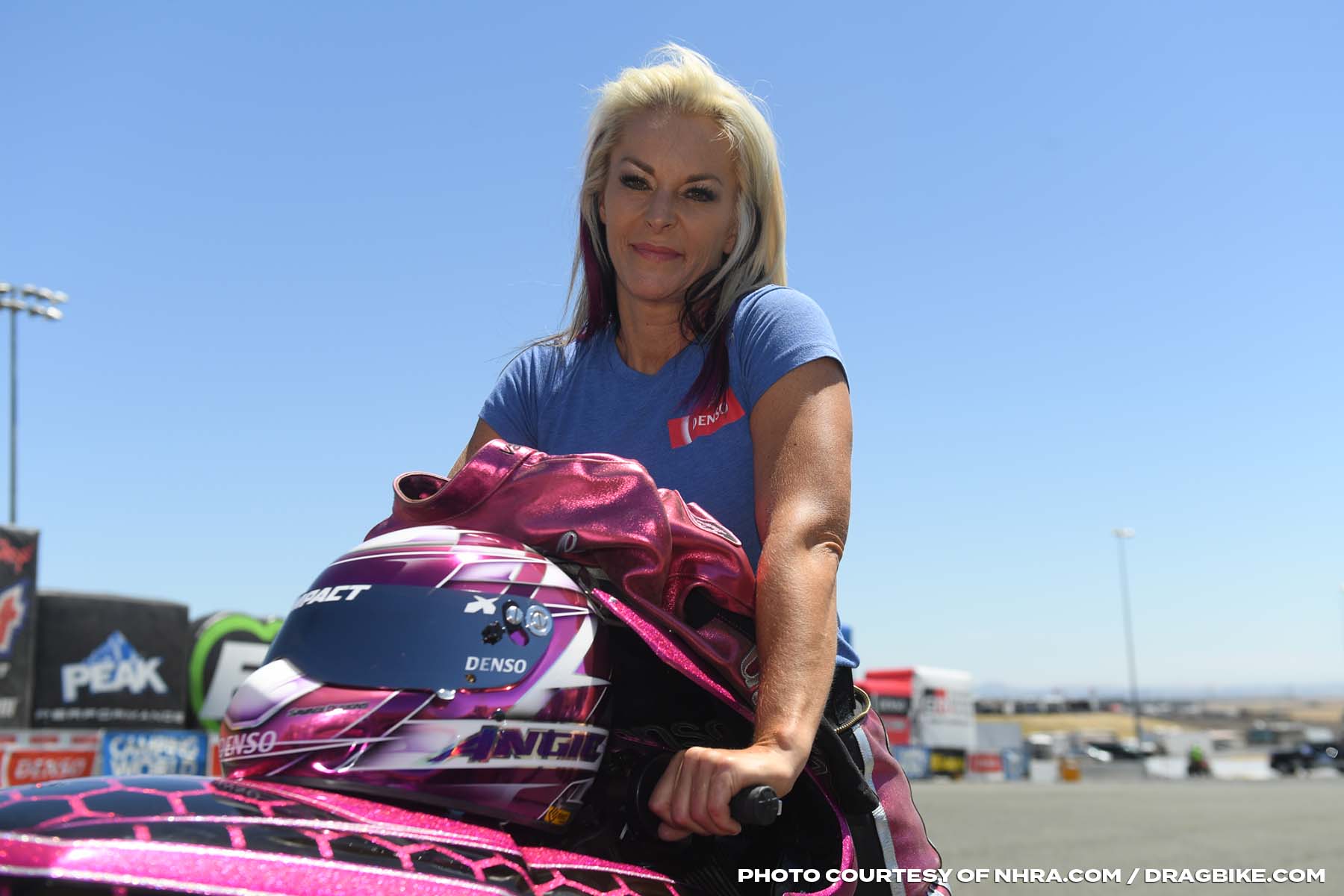 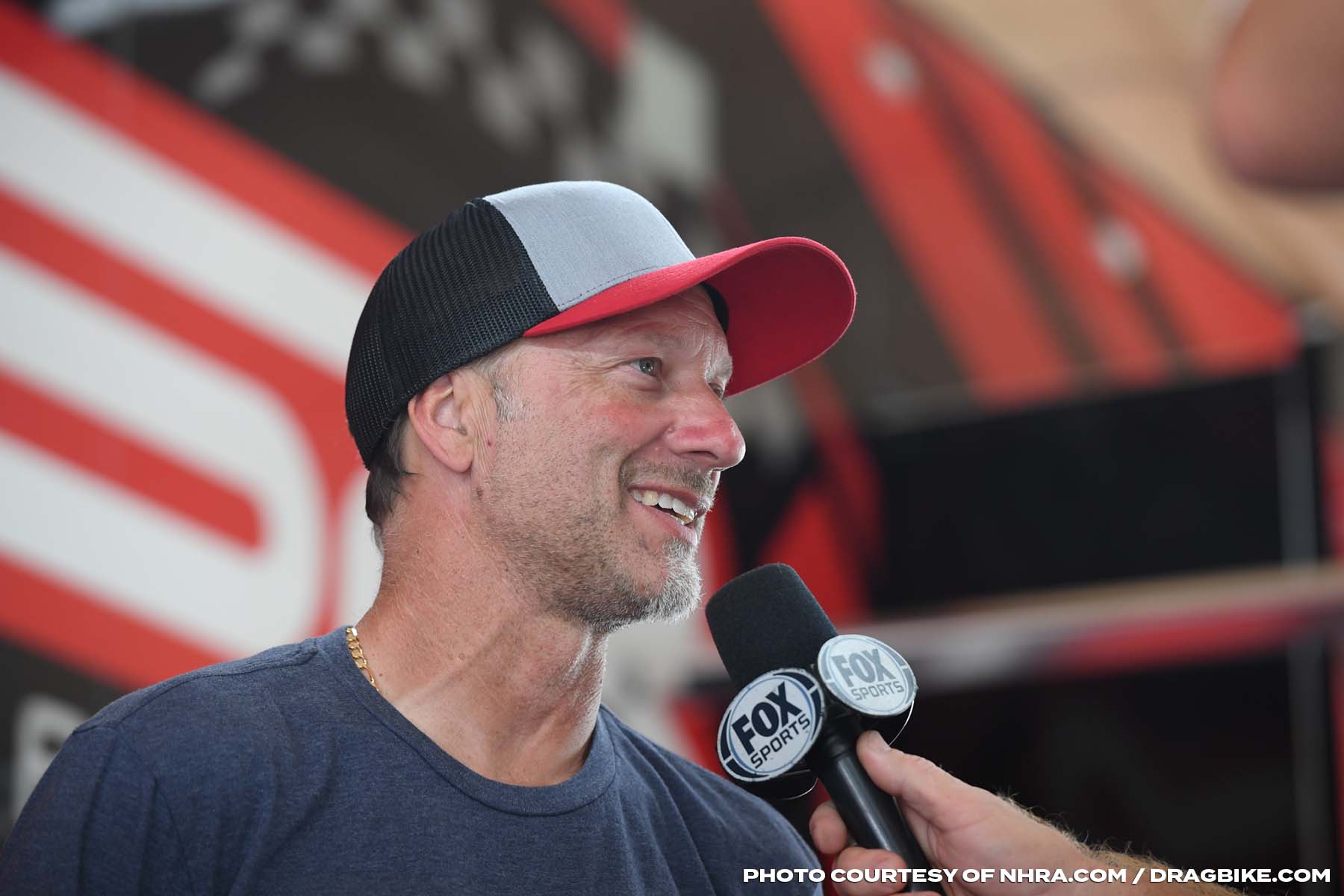 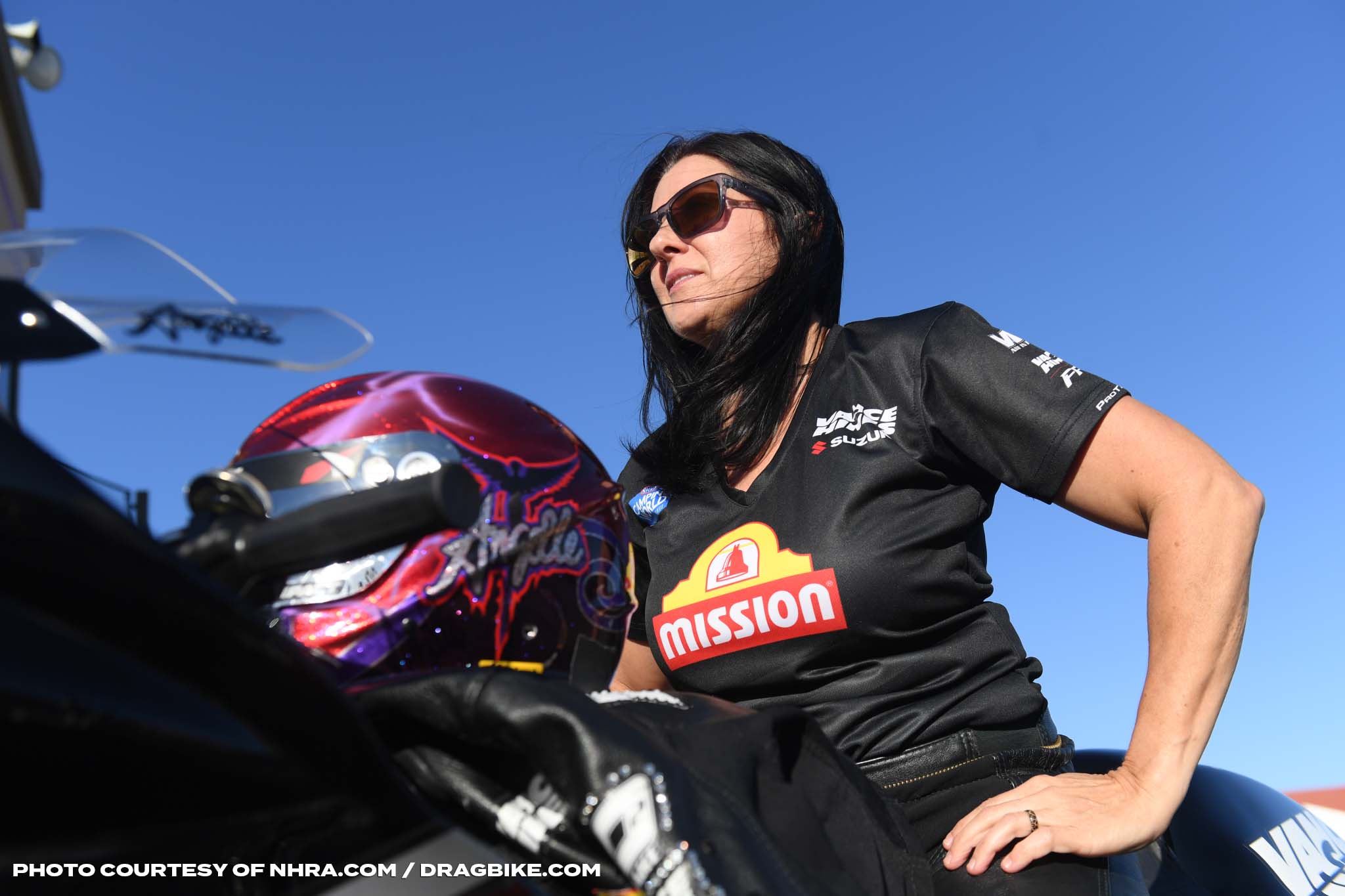 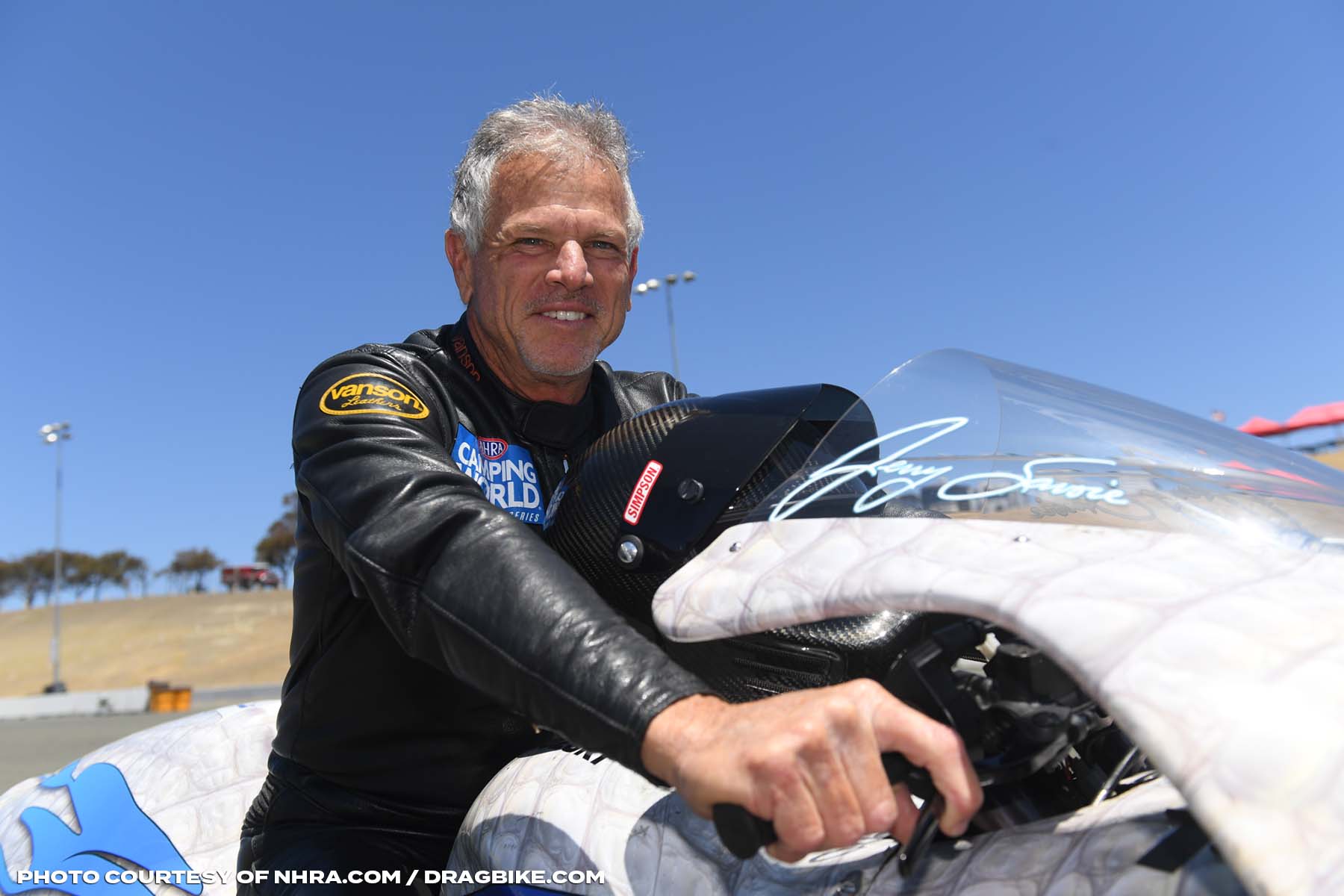 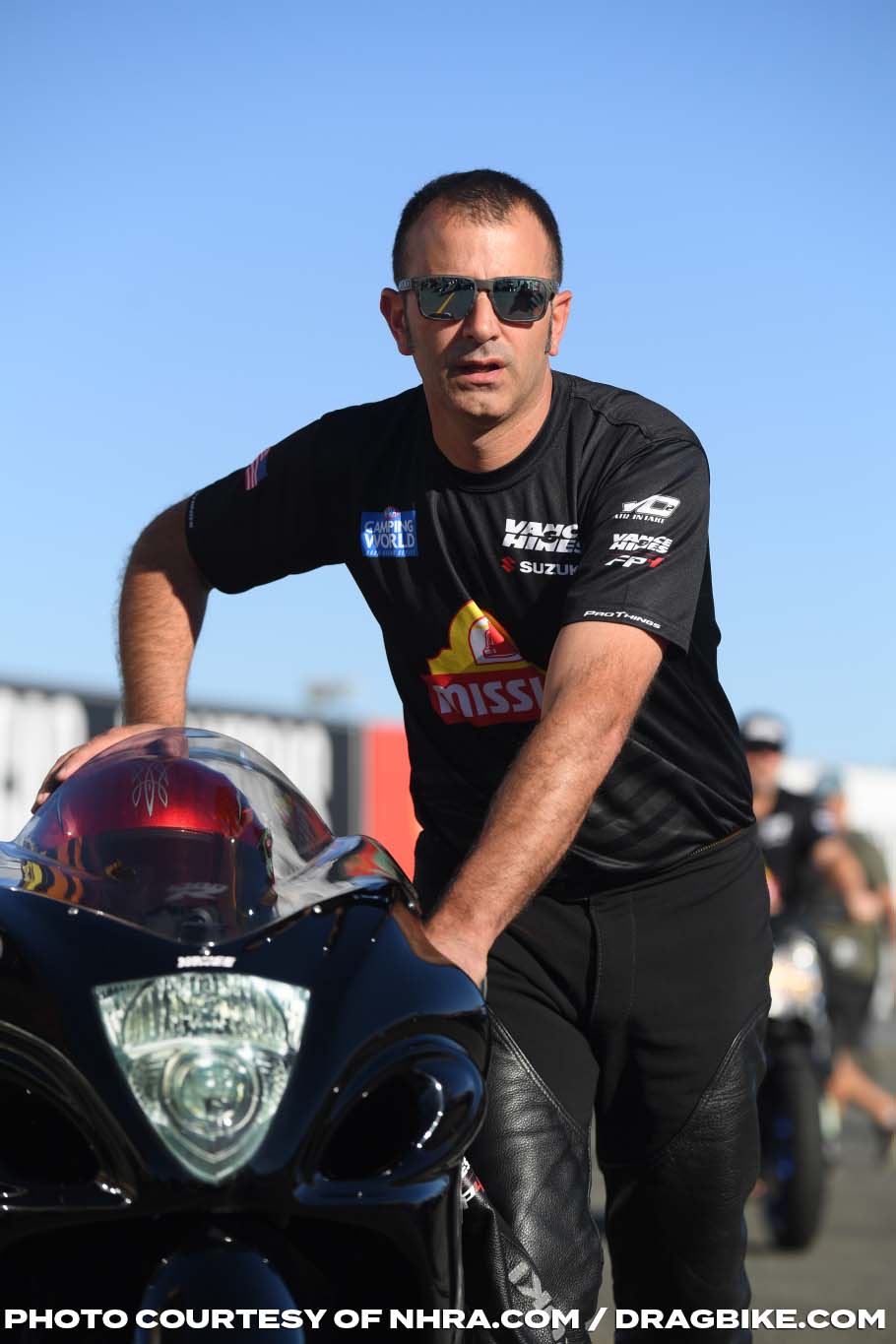 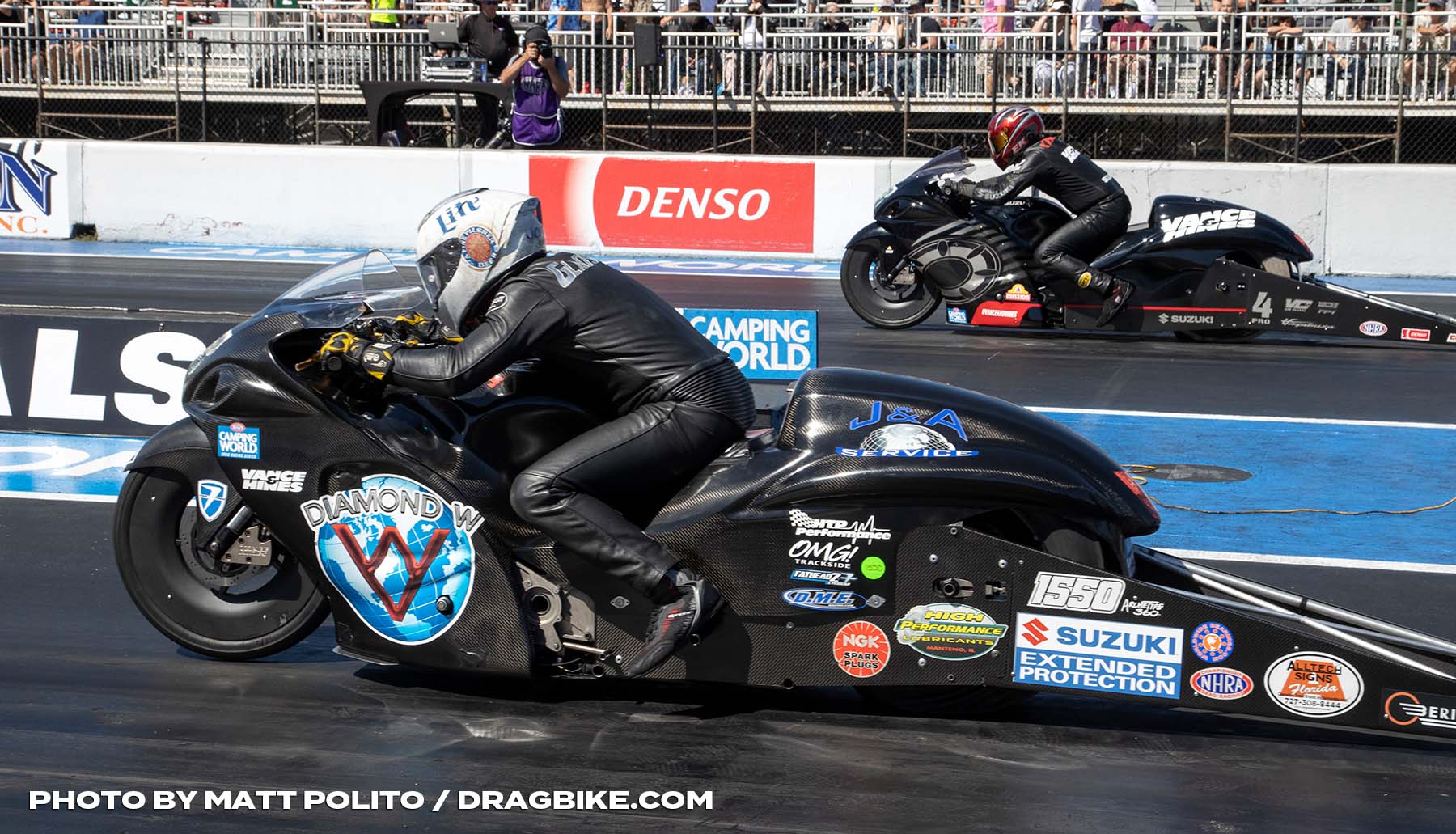 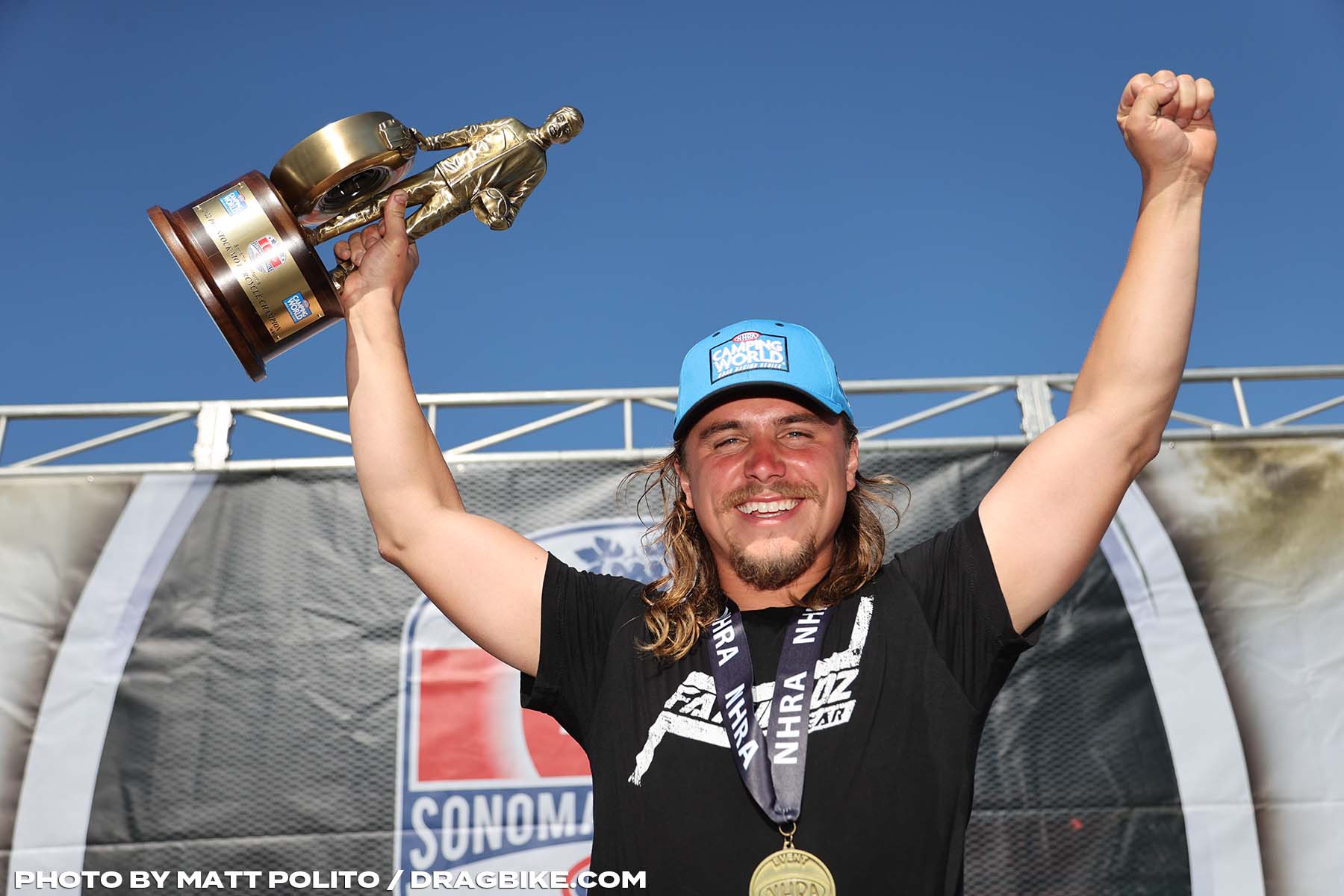 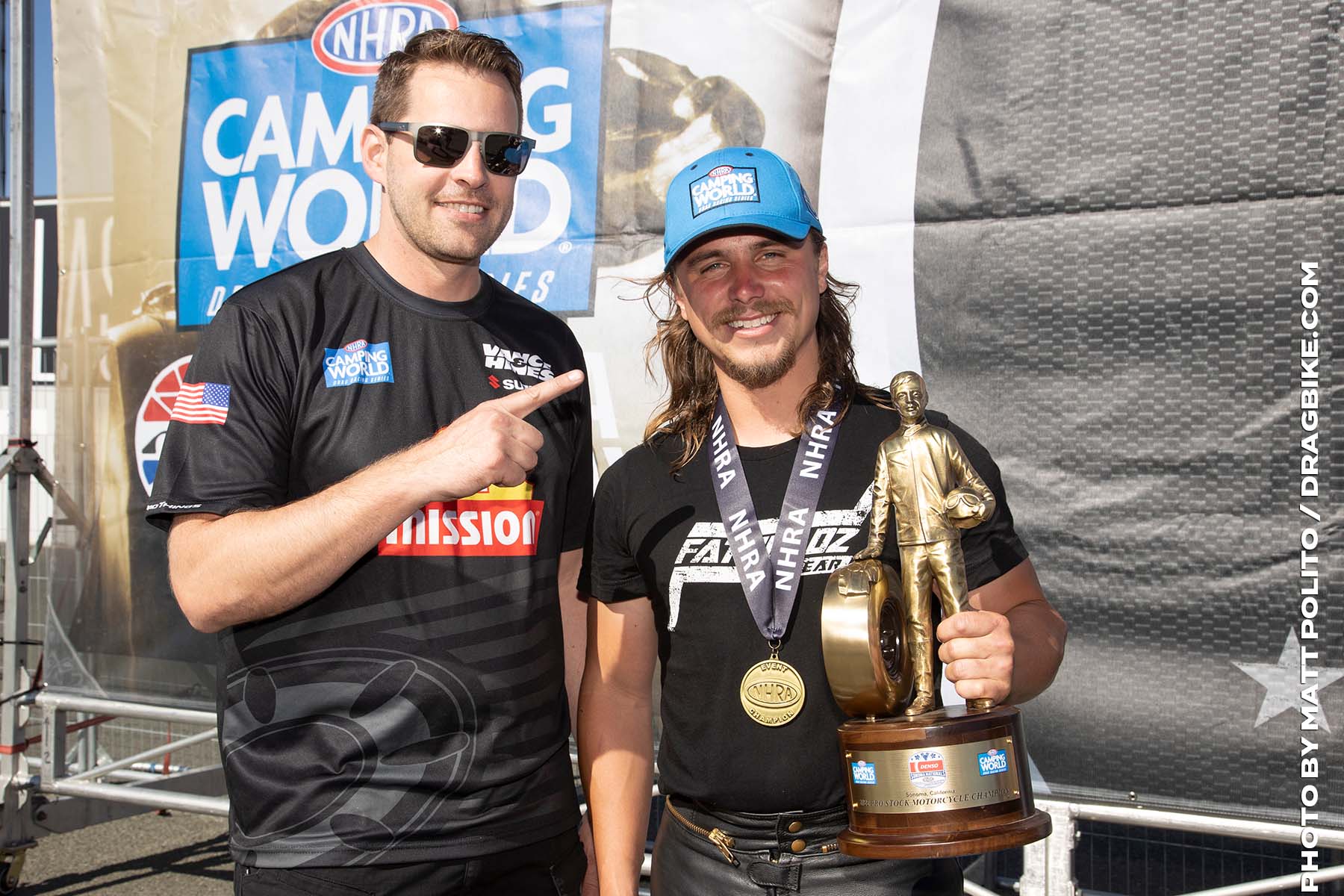 Sampey put on an incredible show on Saturday in Pro Stock Motorcycle, making the quickest run of each session and blistering the track record with an incredible pass of 6.700 at 200.95 on her Mission Foods/Vance & Hines Suzuki. That run closed out qualifying and also tied the third-quickest run in class history, putting Sampey in a prime position heading into eliminations. It’s her third No. 1 spot of 2022 and 56th in her career as she looks to leave Sonoma with the points lead in the class.

“I’m still trying to be better and trying to improve, and I’m lucky to have a really successful team behind me,” Sampey said. “My focus is just on trying to get down the track and Andrew (Hines) has done a wonderful job tuning my bike. I’m really glad to have had some success with him tuning this bike. If we leave the starting line right, it’s going to be fast. This is an amazing class to compete in, but you have to be on your game all four rounds if you want to be successful.”

Eliminations for the Denso NHRA Sonoma Nationals begin at 10:30 a.m. on Sunday at Sonoma Raceway. Television coverage on the FOX broadcast network begins at 4 p.m. ET. 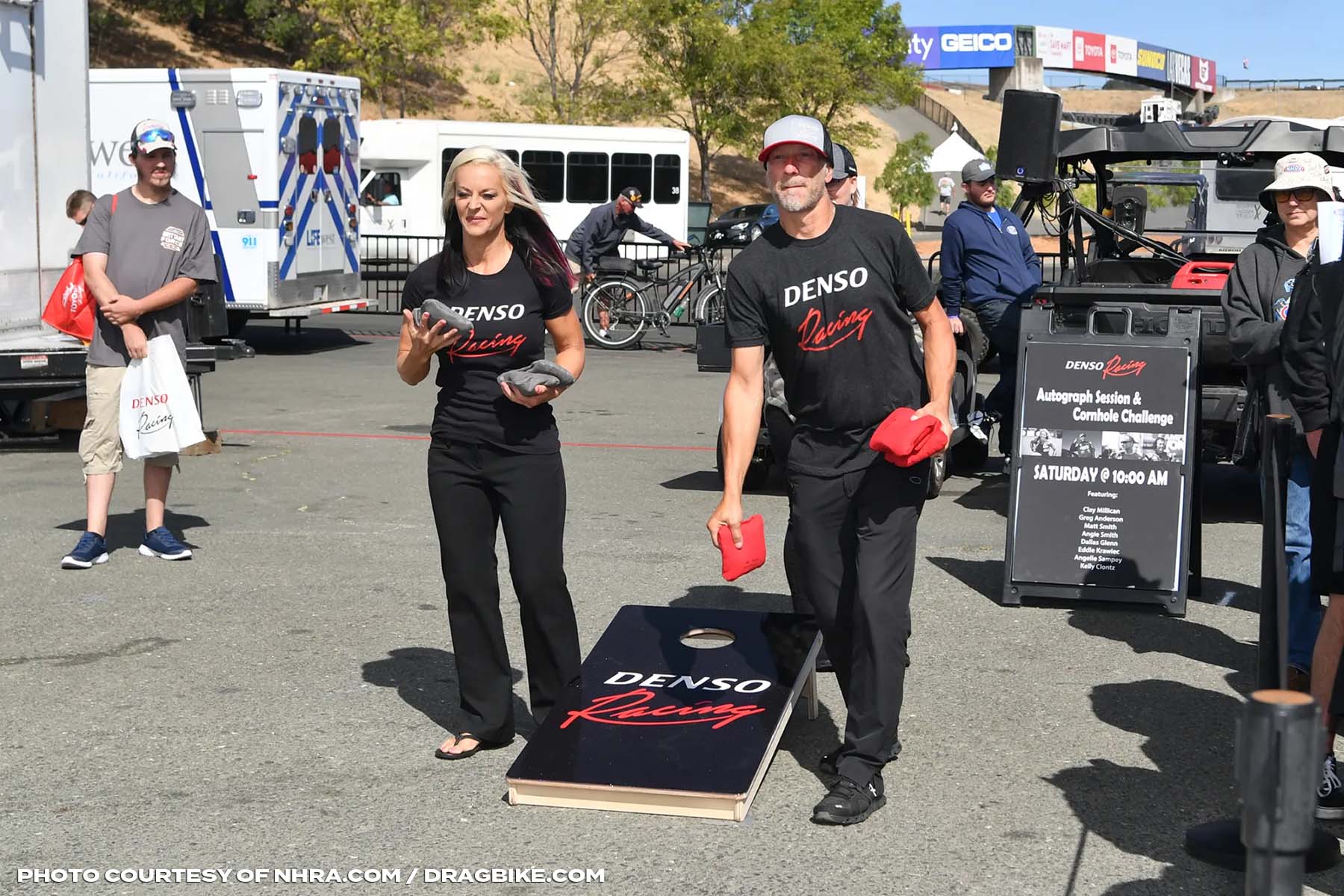 After struggling at the past two races, Pro Stock Motorcycle points leader Steve Johnson returned to form on Friday, jumping to the top on his Butter Transportation Suzuki with a standout pass of 6.743 at 198.73. If it holds, it would be the first No. 1 qualifier of the season for Johnson and the eighth in his career. The run was also a welcome sign for the veteran after suffering back-to-back first-round losses. His points lead shrunk to just 10 points heading into Sonoma, but Johnson with pleased with how his weekend opened on Friday.

“Our philosophy was just to get it down the track so we can get data and test some things,” Johnson said. “We really wanted to go ‘A to B.’ We made some good decisions, and we had a good run. That 60-foot was really good and very important to what we do, and that was huge. It’s so important to run well because it’s so hard to ride a Pro Stock Motorcycle and you need the confidence as a rider.” 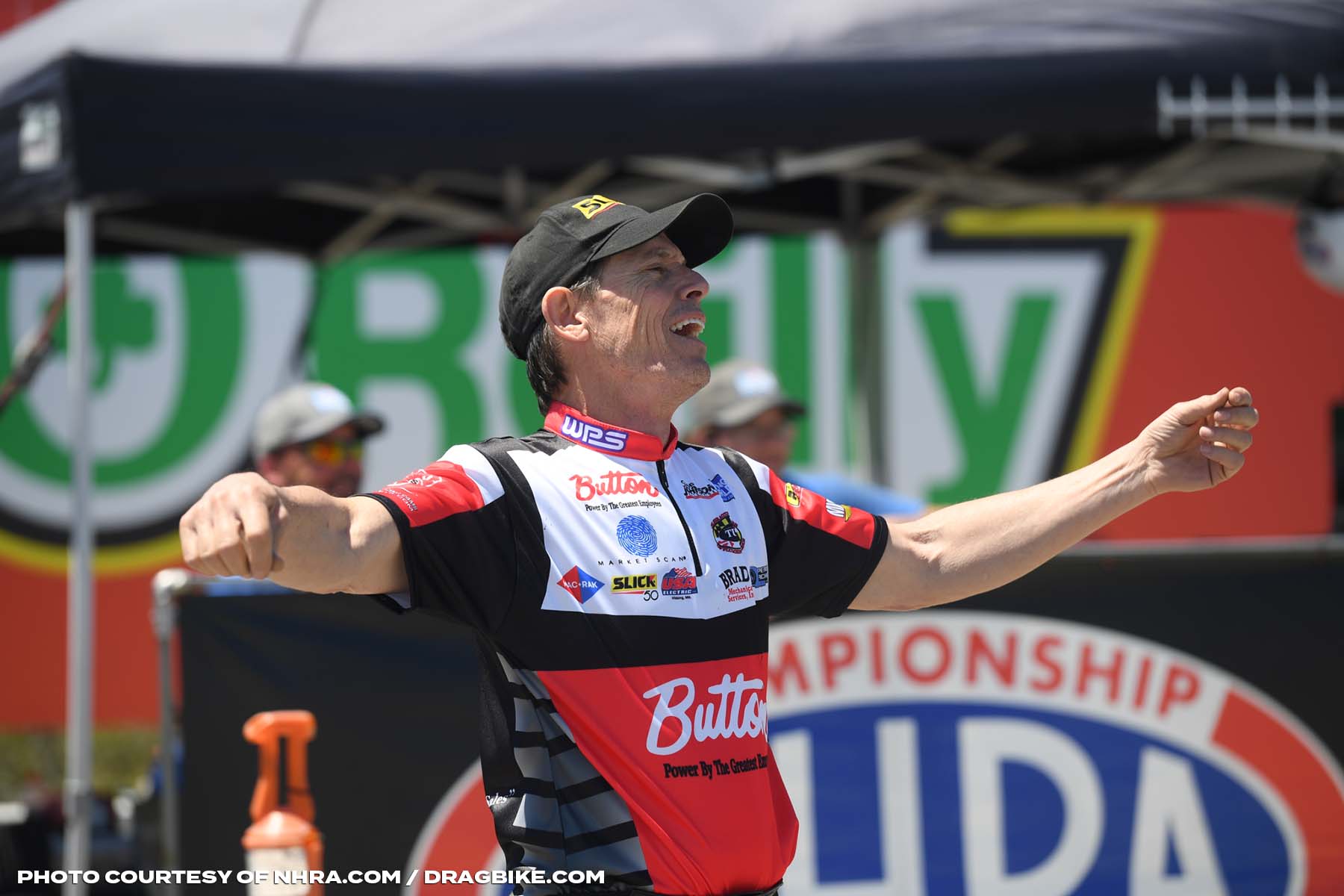 Qualifying continues at 12 p.m. ET on Saturday at the Denso NHRA Sonoma Nationals at Sonoma Raceway. 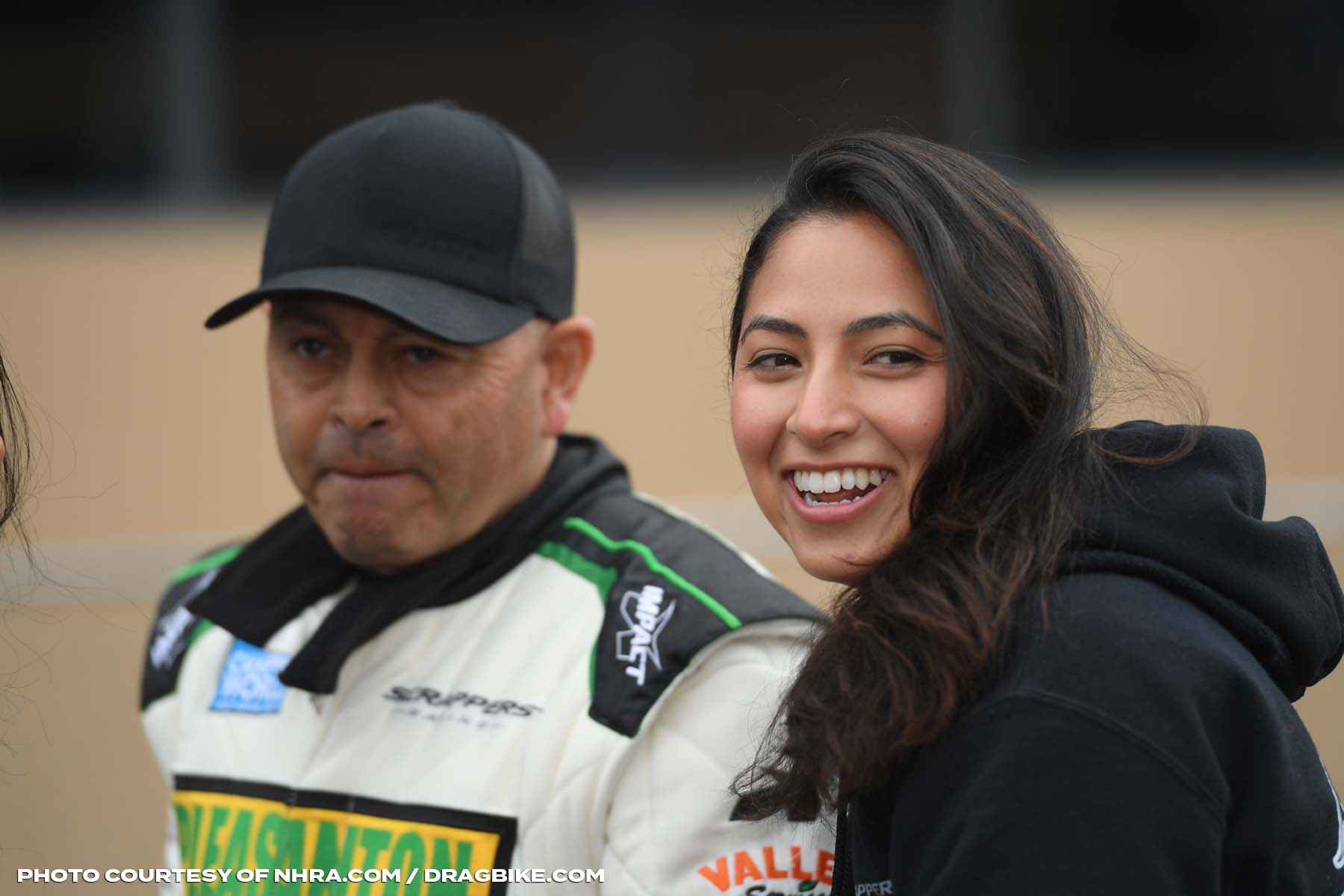