Krawiec rode to the Pro Stock Motorcycle victory with a 6.852 at 196.70 on his Screamin’ Eagle Vance & Hines Harley-Davidson to better LE Tonglet on his Nitro Fish Racing Suzuki in the finals. He earned his fifth victory of the season and third consecutive to improve his lead in the points standings. 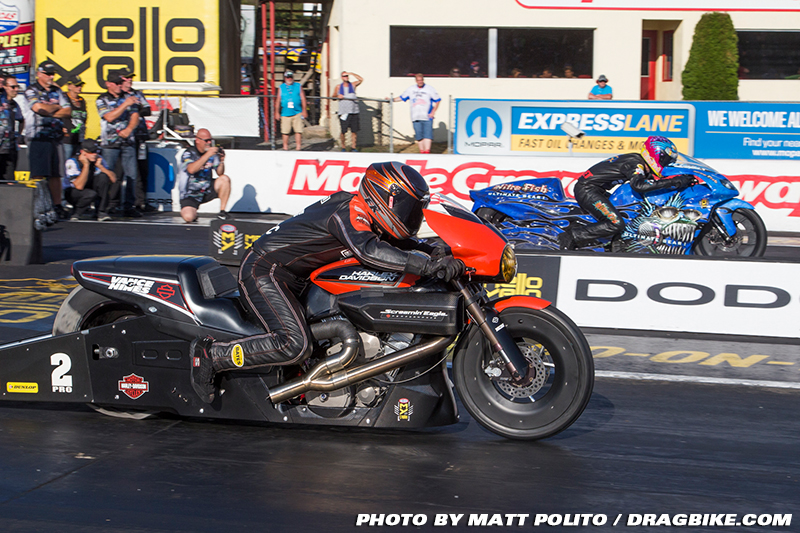 “Things are definitely on the upswing since we switched back to last year’s chassis, it’s been huge for me and my team at the exact right time,” Krawiec said. “We didn’t start out as strong as we had hoped in qualifying, but we put it all together today and we’re pretty pleased with these results.”

Krawiec qualified fourth before taking down Kelly Clontz, teammate Andrew Hines and No. 1 qualifier Scott Pollacheck en route to the finals. Tonglet was the No. 7 qualifier and bested Angie Smith, teammate Jerry Savoie and Hector Arana Jr. as he finished as the runner-up for only the second time in his seven final rounds this year. 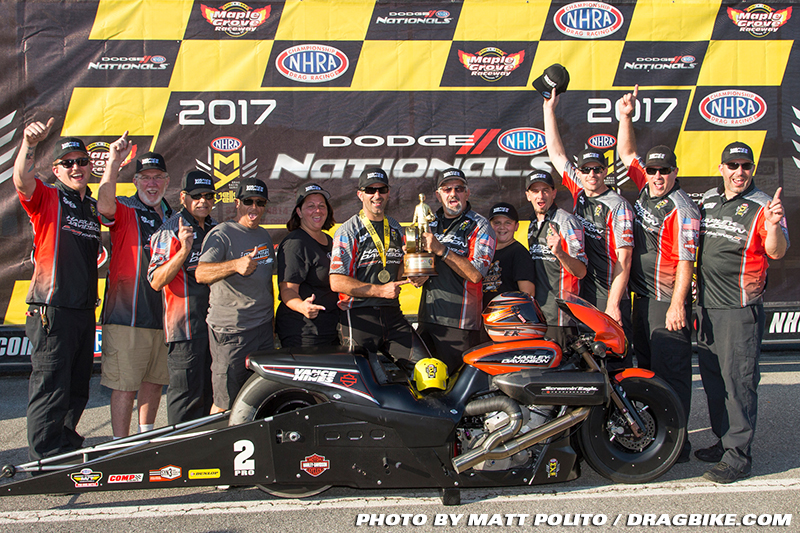 Matt Smith had the quickest run of an opening round that featured all eight top-half qualifiers advancing. Smith wheeled his Polaris to a 6.865 to defeat Joey Gladstone and set up a second-round match with No. 1 qualifier Scotty Pollacheck, who ran a 6.884 en route to victory over Andie Rawlings. Jerry Savoie (6.872), Eddie Krawiec (6.879), and Hector Arana Jr. (6.889) also were in the 6.8s on their winning passes. 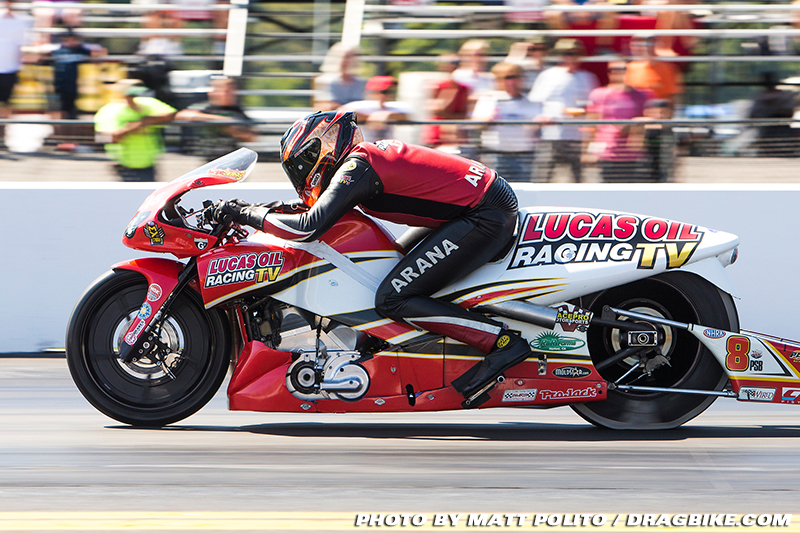 A pair of teammate battles was among the highlights of the second round of two-wheel competition. The White Alligator Racing duo of Jerry Savoie and LE Tonglet met up in round two for the second straight week, but in a reverse of the Charlotte event, Tonglet came out this time around, leaving the starting line first and outrunning Savoie, whose bike drifted towards the centerline midway through the pass. The Harleys also faced off, a contest in which Eddie Krawiec ran low e.t. of the round, 6.87, to turn on the win light against Andrew Hines. No. 1 qualifier Scotty Pollacheck defeated Matt Smith, and Hector Arana Jr. stopped Karen Stoffer to round out the final four. 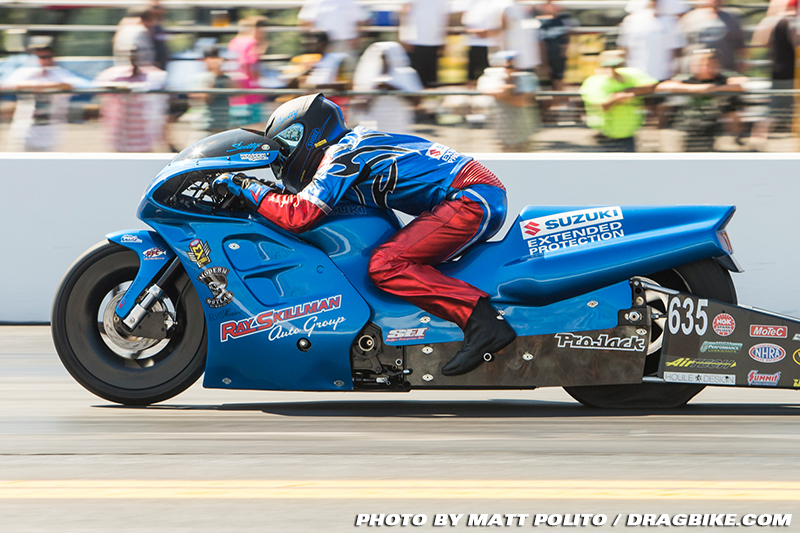 Eddie Krawiec will try to pick up his third straight win and second consecutive at this event after he got around No. 1 qualifier Scotty Pollacheck in the semi’s. Krawiec, winner of the Chevrolet Performance Nationals over Labor Day weekend and the NHRA Carolina Nationals last weekend, used a .016 to .054 lead at the Tree to win on a slight holeshot, 6.89 to 6.88. Krawiec will have lane choice against LE Tonglet, who rode his Nitro Fish Suzuki to a 6.94 victory over Hector Arana Jr., who slowed to a 7.10. 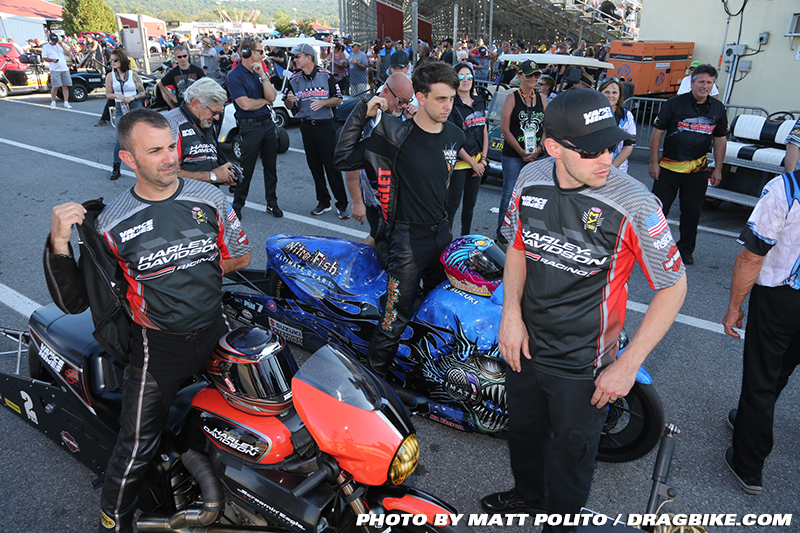 Eddie Krawiec extended his points lead when he bested No. 2 points runner LE Tonglet in the final. The pair launched at the same time with matching .027 lights, but the race was over shortly after that when Tonglet’s Suzuki experienced troubles about 100 feet out, and he was forced to click it off. Krawiec would have been tough to beat anyway because he clocked a 6.852, low e.t. of race day, on his victory pass. 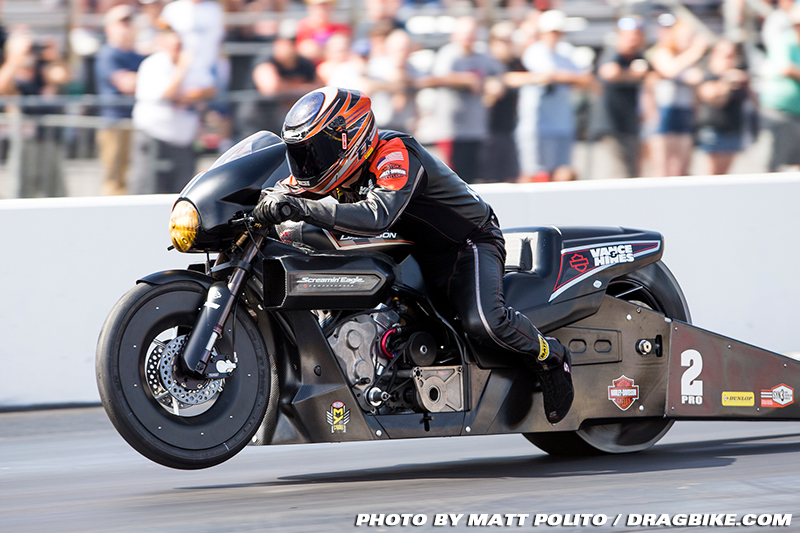 The run continued a string of strong 6.8s throughout eliminations. Krawiec began with a pair of 6.87s against Kelly Clontz and teammate Andrew Hines, then posted a 6.89 in the semifinals against Scotty Pollacheck. The win is Krawiec’s third straight and his fifth of the season, tying Tonglet for most wins in the class in 2017. It is also his second consecutive at the Dodge NHRA Nationals and fifth overall at the Reading race. Krawiec leaves Maple Grove Raceway with a 71-point advantage, the biggest lead in any Pro category. 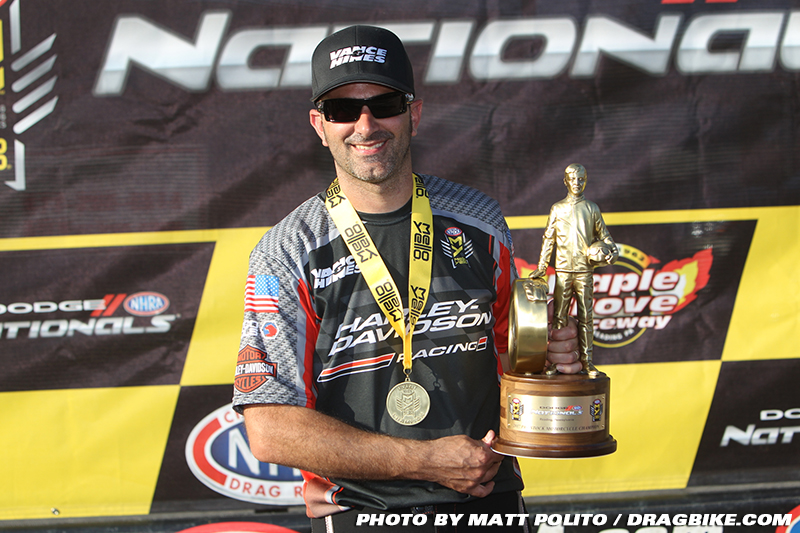 Pollacheck moved atop the Pro Stock Motorcycle qualifying order with a 6.822 at 196.76 on his Suzuki Extended Protection Suzuki in the final qualifying session on Saturday. It is the first No. 1 qualifier of his career. Pollacheck is set to take on Andie Rawlings in the first round. 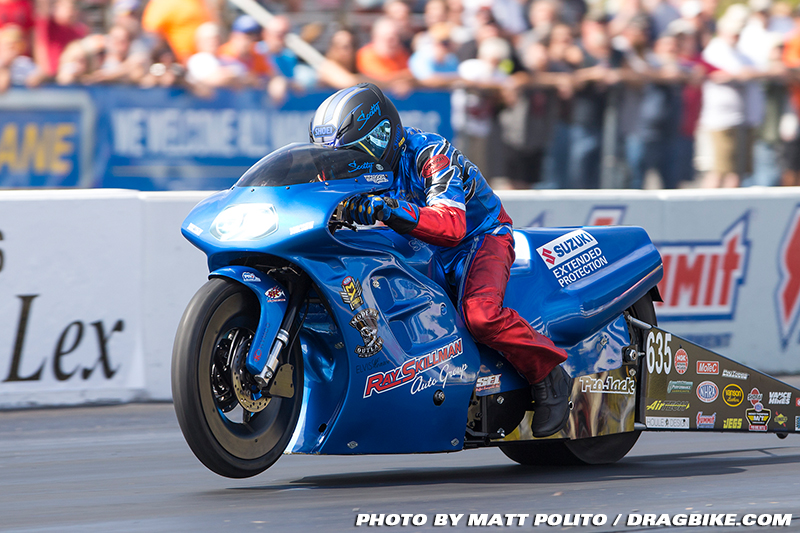 “In the first round, we blew our motor so we had to put a new one in, but I have such an incredible team that we were able to get back out there and have some great runs today,” Pollacheck said. “Nothing is ever easy for us, but to get our first No. 1 ever is such a huge deal.” 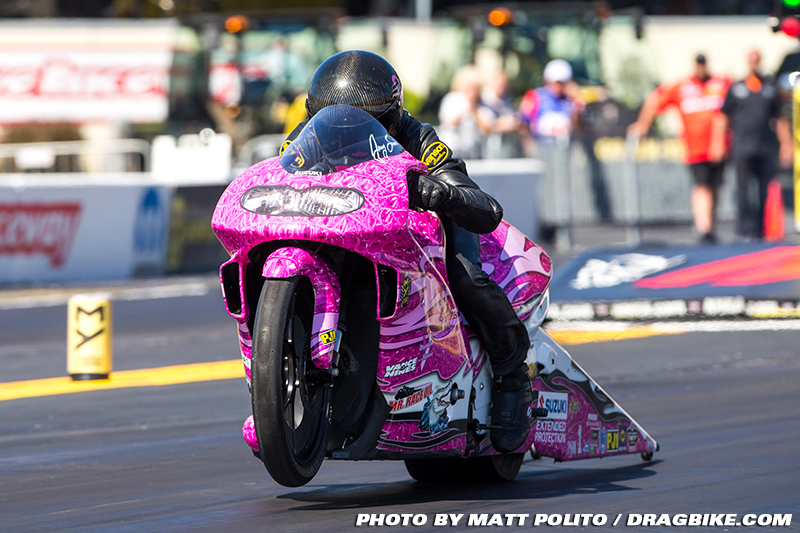 Reigning world champ Jerry Savoie moved up to second after a 6.824 at 196.76 on his White Alligator Racing Suzuki and is slated to race Lance Bonham in the first elimination round. Hector Arana Jr. dropped to third after his preliminary No. 1 pass of 6.834 at 196.76 did not hold up on Saturday. He will take on Charlie Sullivan in the first round on Sunday. 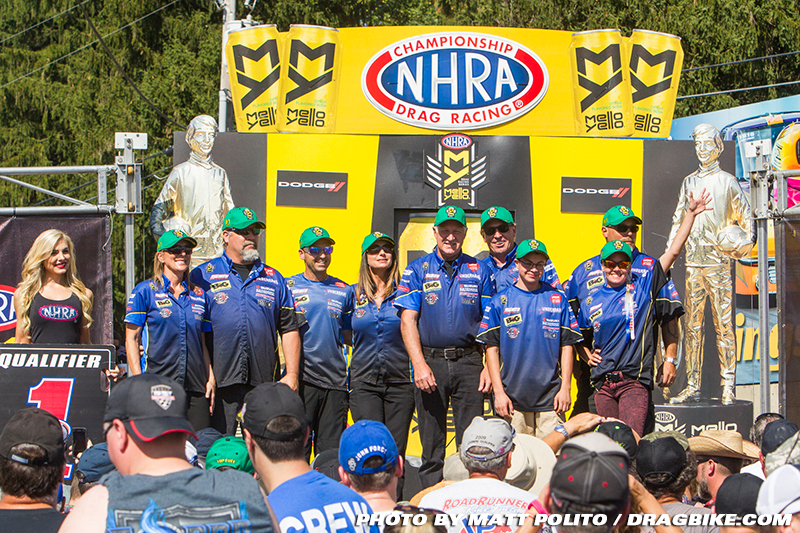 Arana Jr. finished atop the Pro Stock Motorcycle qualifying order with a 6.834 at 196.76 in his Lucas Oil Buell during his second pass on Friday after not making it down the track in the first session. He has one previous No. 1 this season. 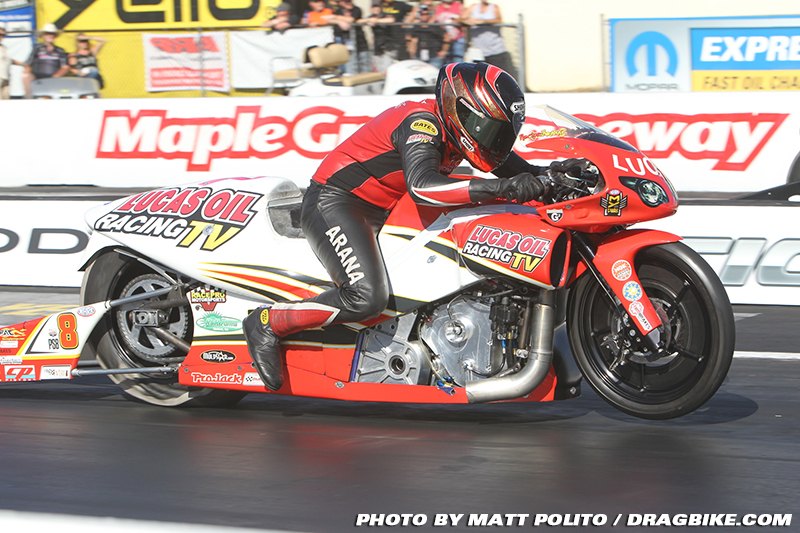 “We had some data for the track despite a rough first run, and we trusted our combination to be fast and we ended up really well,” Arana Jr. said. “We know how important these qualifying points are, so we were pretty excited to see we held onto the top spot today.” 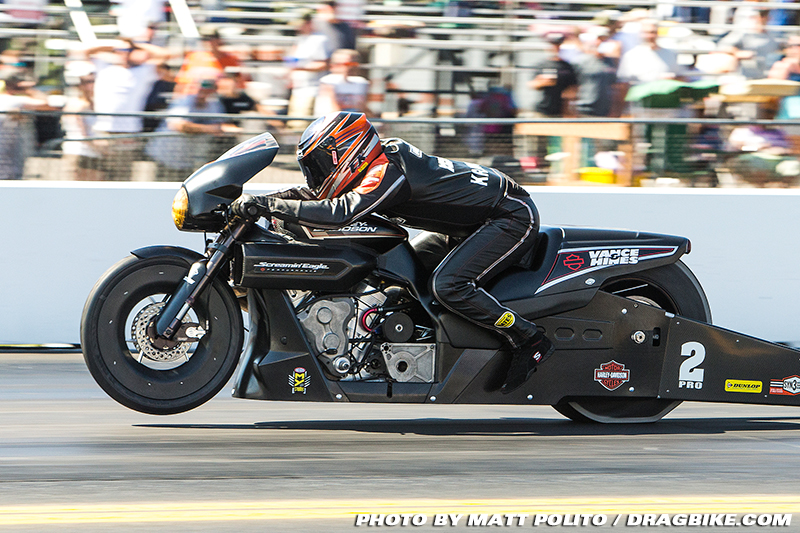