On Sunday, July 8th, 2018, the elimination rounds began for the Mickey Thompson Tires, Top Fuel Harleys at 12:16 PM under bright blue sunny skies with a track temperature of 124 degrees/f.

The first pair out was, the Rickey House and Beau Layne match up. We had the classic cagey veteran and the rookie going at it. Coming into the Epping race, Rickey House on the Cat Spot racing Top Fuel Harley was 4th in championship points and Beau Layne was rated 6th. The first off the line was Beau Layne with a .049 reaction to the green light and he was off like a shot. Sharkey responded with a .082 reaction time and pulled away quickly. Storming across the finish line first was Rickey House with a 6.28 to Beau Layne’s 7.21, ending his day.

The next pair out were teammates Jay Turner and Tii Tharpe. They are the best of friends but on the starting line – someone has to go down. Jay jumped out first with a .049 RT to Tii’s, .058 that put him almost a tenth in the hole, right at the start. Down track, Jay’s 6.35 @ 225 was more than Tii’s 6.47 could cover.

In the Bobby Malloy Vs Tracy Kile pairing, it was two old veteran drag racers duking it out. Tracy had a best of 6.66 in qualifying and facing Bobby who posted a 6.31 right off the trailer – TK knew he had his hands full. Tracy got out first with an .054 RT and Bobby, knowing he had Tracy by a bunch, took it easy on the tree with a .101 RT. In the end, Tracy’s 6.62 was no match for Bobby’s 6.31 and that was all he wrote for Tracy.

In the final pairing, the Doug Vancil Vs Peter Geiss matchup was the #1 qualifier (Vancil 6.30) taking on the #8 qualifier (Geiss) in classic underdog match up. Peter Geiss was first off the starting line with a .112 reaction time to the tree. Doug Vancil responded with a .128 RT and the race was on. At the big end of the race track where it counts most, Doug Vancil got there first with a 6.31 to The Thug’s 7.01, which ended Peter’s race weekend.

When the semi-final round matchup unfolded, Rickey House and Doug Vancil went at it first. Sharkey was out for blood and he struck first getting off the line with a solid .056 light to Doug’s, .064 RT. His lead was short lived as Doug pulled steadily away with the quickest ET of the weekend so far, a stunning 6.26 @ 226 MPH, that just ran away from the Cat Spot Racing bike of Rickey House who slowed after mid-track.

The Jay Turner, Bobby Malloy match-up next was vital for Jay Turner who was #3 in points coming into this race. His victory over Tii in E-1 helped him gain ground over Tii and brought him closer to Doug Vancil who is still out front. Knowing this was a vital round of racing, Bobby Malloy chopped the tree, but too close as he went red by .014, while Jay took off on his quickest pass of the weekend, clocking in at 6.263 @ 228.31 MPH, a new TFH track record for New England Dragway.

In the final round, with all the marbles on the table, two of the best of the best faced off to settle this race. Doug Vancil fired first and they both did good smoky burnouts for the crowd. Jay got away first with an excellent .039 RT to Doug’s .046 light. As they thundered down track, Doug got the better of this matchup by hitting the win stripe first with a 6.283 elapsed time to Jay’s 6.48, to secure the win.

While there are two races remaining in the NHRA TFH series, Doug Vancil’s Vance & Hines Racing Top Fuel Harley, tuned by Mike Romine continues to distance itself from the pack.

With Chris Streeter out of the ladder before Q-3, it was apparent the shuffle of the deck was about to commence. The only real question was: who would get the good cards and a seat at the main table for Sunday? And the reshuffle of the deck with the first pass.

Tracy Kile, working with Frank Capone and Mark Godin on Saturday had the Bad Apple racing team, like the band; back together again. So Frank came out guns blazing as the first TFH in Q3 and laid down a 6.70 that put him into the #7 qualifying spot right away. 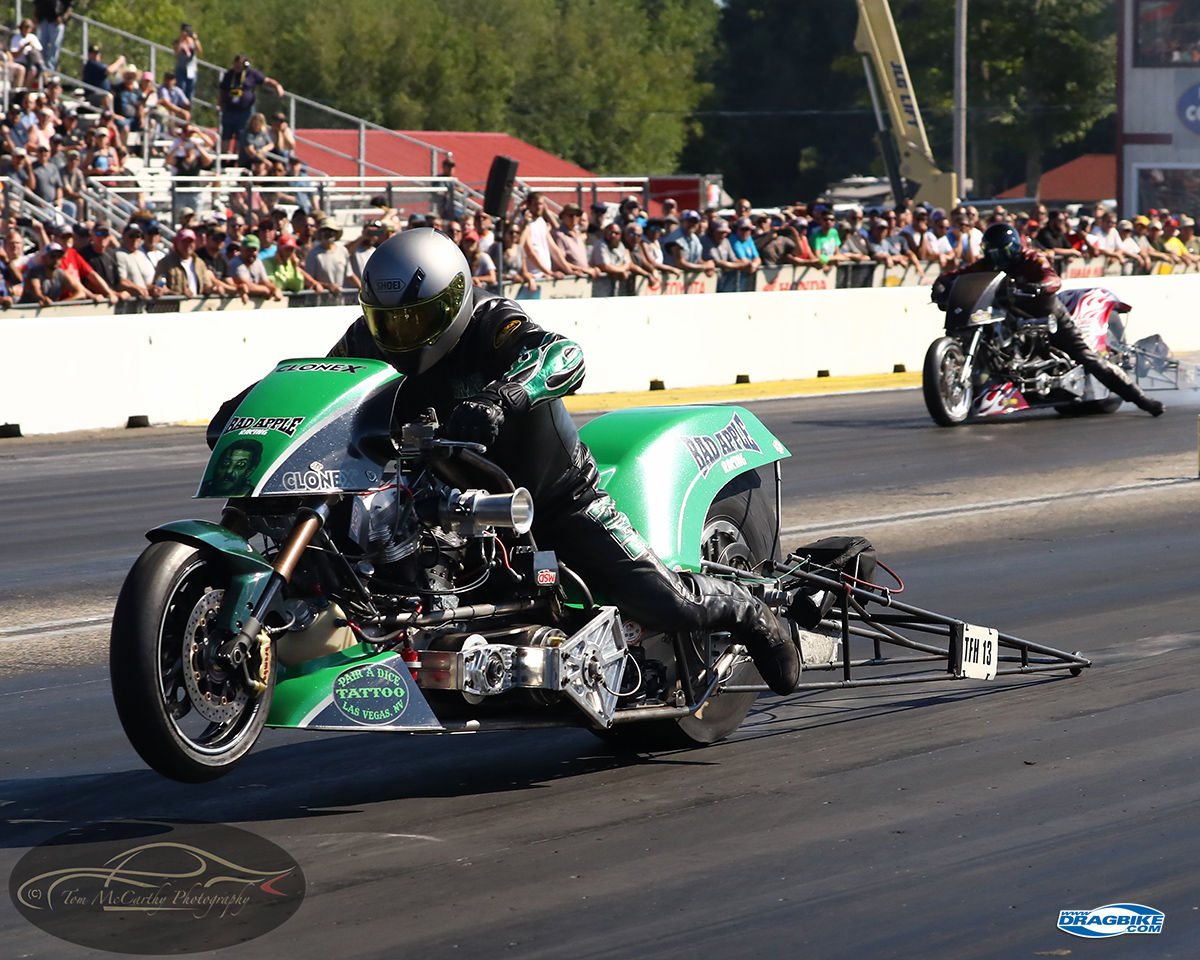 Unfortunately for Mike Scott, he suffered and I do mean suffered his third consecutive N/T pass in a row. The stout racer put his bike in the beams and right at the hit of the throttle, the rear tire lit-up-in-smoke and that was all on his Q-3 effort. Regrettably, for Mike, Q-4 was a repeat of Q-3, ending his weekend.

During the fourth and final session, With Chris Streeter out (broke), it was up to Billy Jack or Mike Scott to crack the field. During Q-4 Billy Jack ran a 7.33 at 209, which did not get him in the show, but it was a valiant effort for Billy Jack Racing. 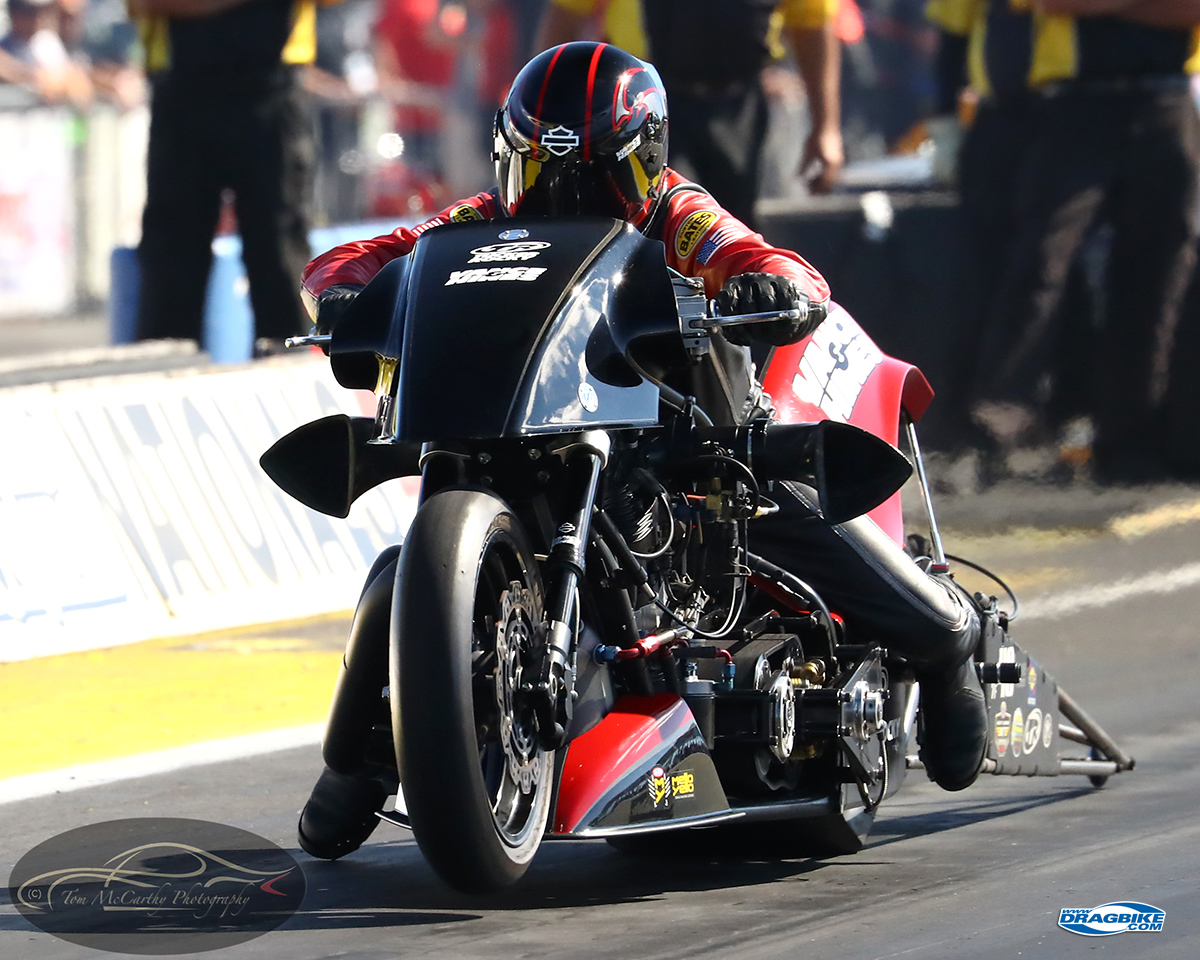 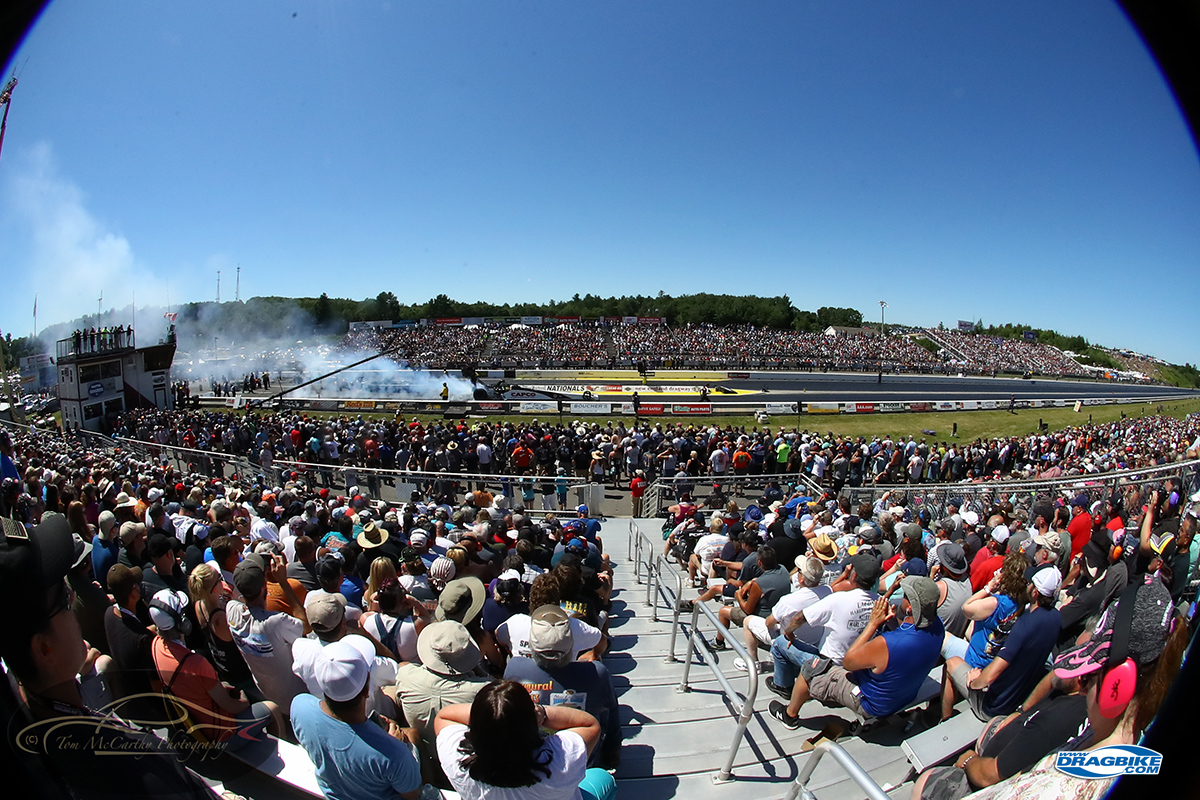 In E-1 on Sunday, Doug Vancil will race Peter Geiss, Rickey House will match up with Beau Layne, then we have Bobby Malloy Vs Tracy Kile and finally, Jay Turner will square off with teammate Tii Tharpe. On Sunday, the first round of professional eliminations will happen at close to 11:AM, EST. Watch for the Mickey Thompson Tires Top Fuel Harleys to begin their eliminations some time close to 12 Noon, EST.

The rains came early to New England Dragway on day one of the New England Nationals. They were forecast to arrive just after 8AM, and indeed they did. On the daily run schedule, racing was slated to begin by 9:15 AM, EST, but Mother Nature had plans of her own that trumped this game of chance. As with all racing schedules, the actual run times are subject to change due to prevailing conditions. And with the rain washing out the entire morning of racing action, the schedule was shifted to a 2PM start of racing.

The sun was out by just after 1PM, EST, and the track drying efforts with all-hands-on-deck, began just around 12 noon. The first cars went down New England Dragway’s storied 1320 at about 2:05PM, with Super Street class leading the way. 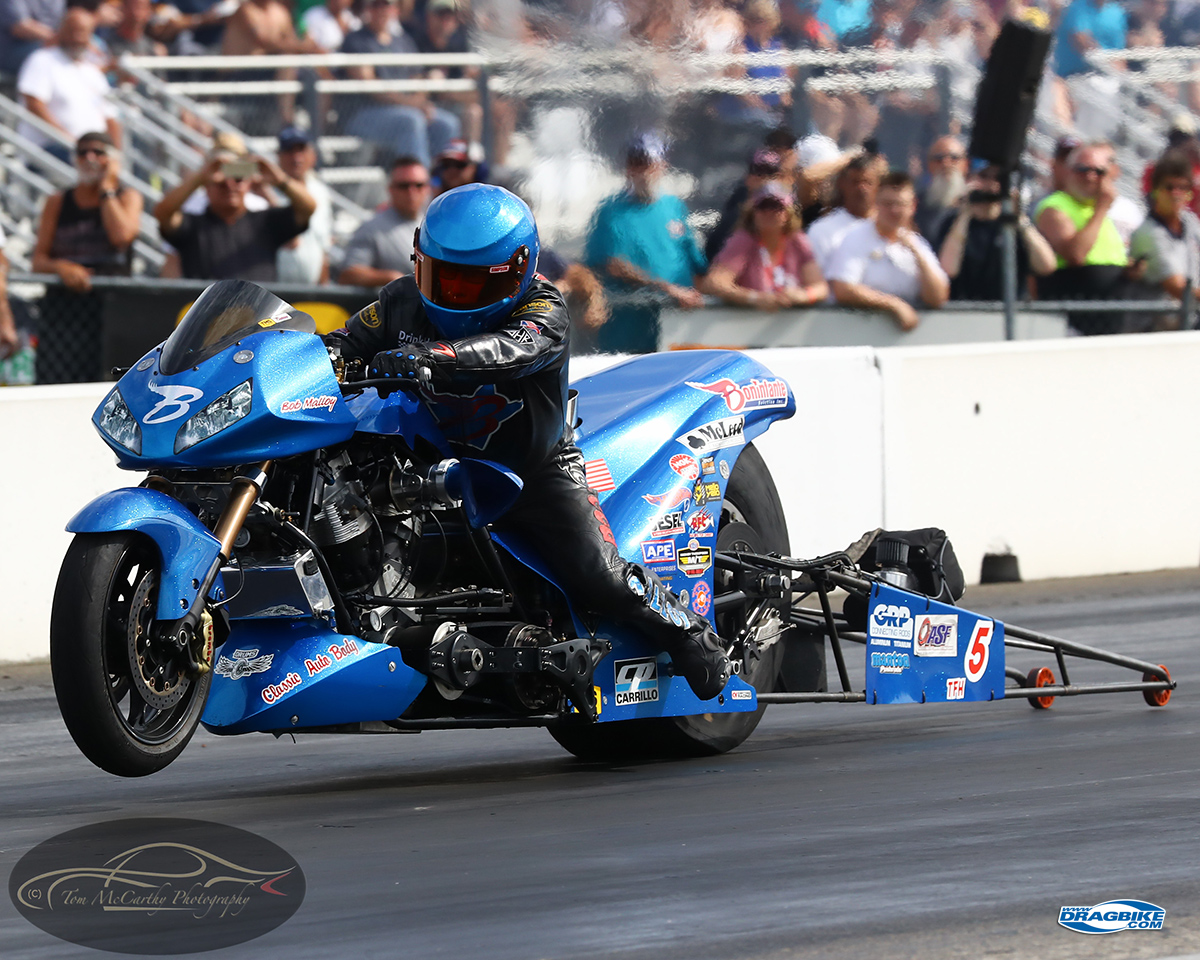 The initial run times for the Friday Q-1 and Q-2 passes for the Mickey Thompson Tires, Top Fuel Harley were set for close to 4 and 6PM, but the shifted race schedule moved the qualifying times to 4:15 and 7:12, which is phenomenal, all things considered. The Q-1 qualifying session began, with Peter Giess leading off with a solo effort. With 11 teams entered, vying for an eight bike qualified field, every team out there today was giving it all they have. 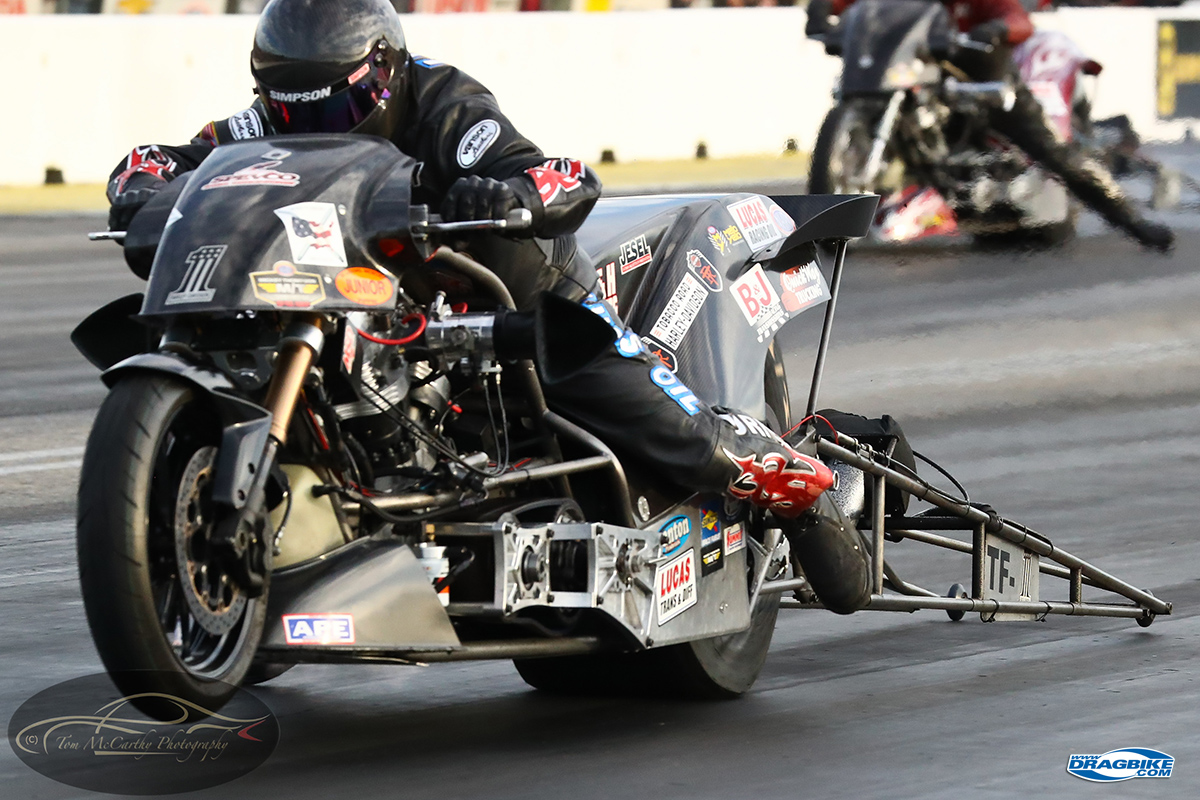 The quickest run of the day was a 6.318 coupled with a 214.95 MPH pass by Bobby Malloy of Glen Mills, PA. His number, on day one of qualifying, was good for the #1 qualifying position, with two more qualifying runs set for Saturday. High MPH for the day belonged to Rickey House of Humble, TX with his thundering 218.23 run during Q-1. 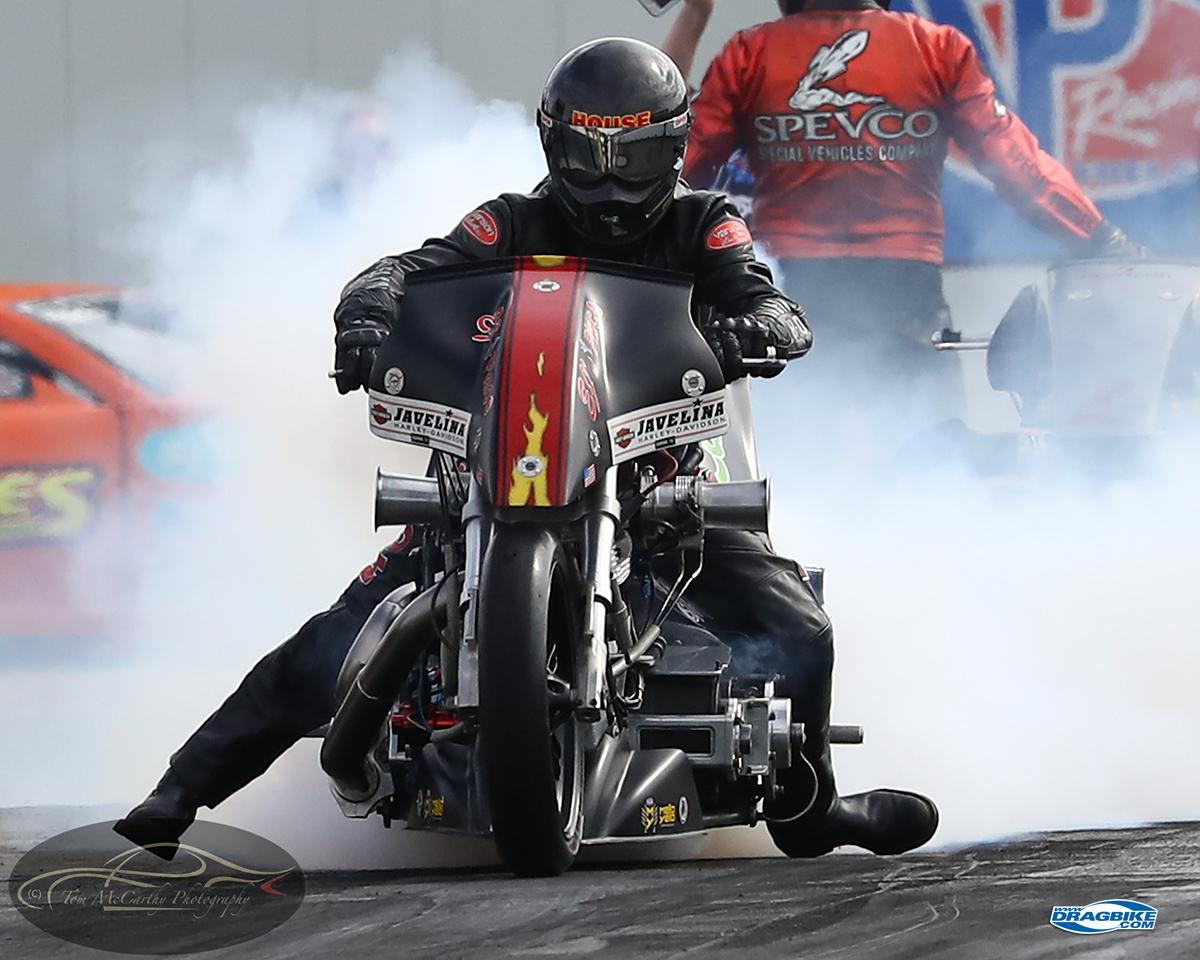 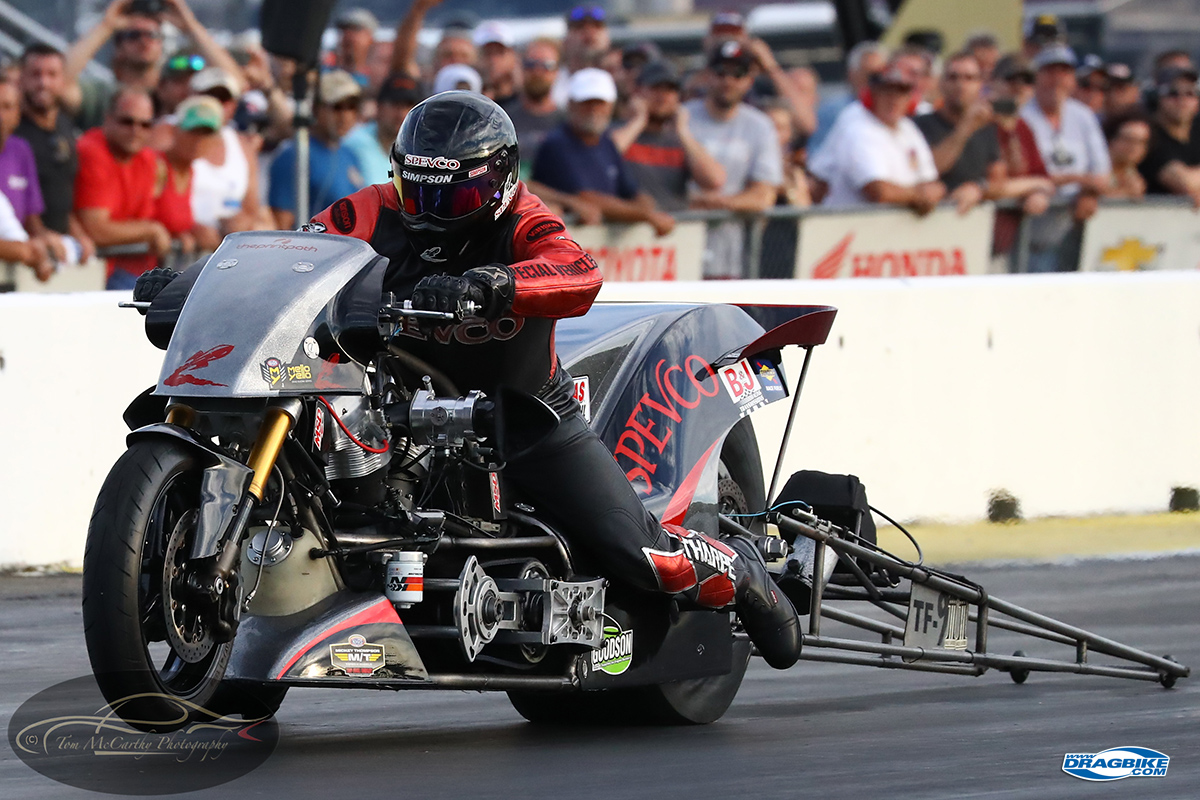 This comprises the top 8 qualifiers thus far. The remaining three qualifiers, Billy Jack (7.50), Tracy Kile (7.78) and Mike Scott, with no time on two attempts – will all be looking to step up their game for Saturday’s qualifying sessions. Tomorrows, qualifying sessions for the Mickey Thompson Tires, Top Fuel Harleys are set to begin at 1PM and 3:30 PM.

On Thursday, July 5th, 2018, all of the pre-entries into the New England Nationals we in the pits, set up, ready to race. Jay Turner, Rickey House, Doug Vancil, Beau Layne, Peter Geiss, Chris Streeter, Mike Scott, Billy Jack, Tii Tharpe, Tracy Kile and Bobby Malloy. Eleven of the best Top Fuel Harley racers in the USA are ready to go into battle for the Mickey Thompson Tires, Top Fuel Harley series race #8 of a 10 race series. 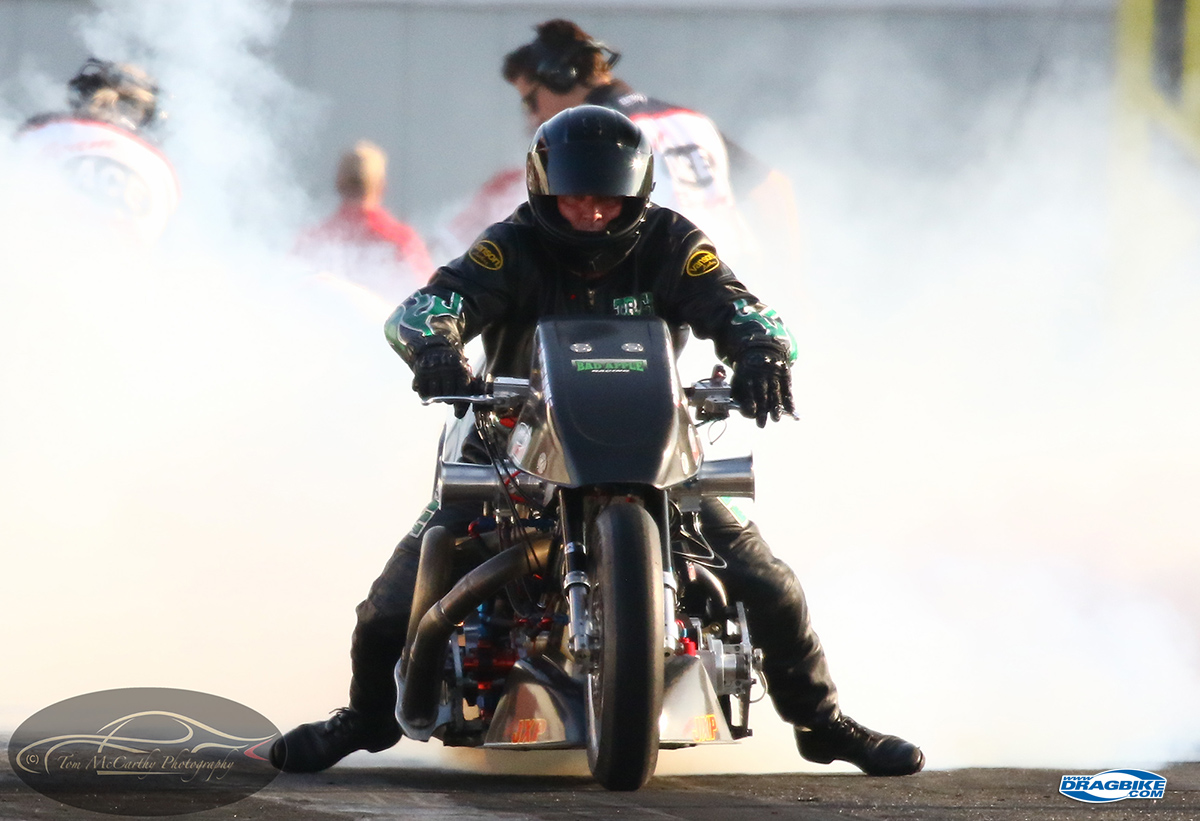 Current points leader Doug Vancil of the Vance & Hines Top Fuel Harley team will have to be mistake free to stay ahead of the Jay Turner Racing machines of Tii Tharpe, Randal Andras and of course the Bull Dog: Jay Turner. Now with Mike Scott leaving his connection with Beau Layne and suddenly returning to racing with Jay Turner, this is one more bike tuned by JTR that is competition proven and capable of winning. Mike Scott is a former IHRA T/F Harley champion, as is Doug Vancil, so expect close racing every round. 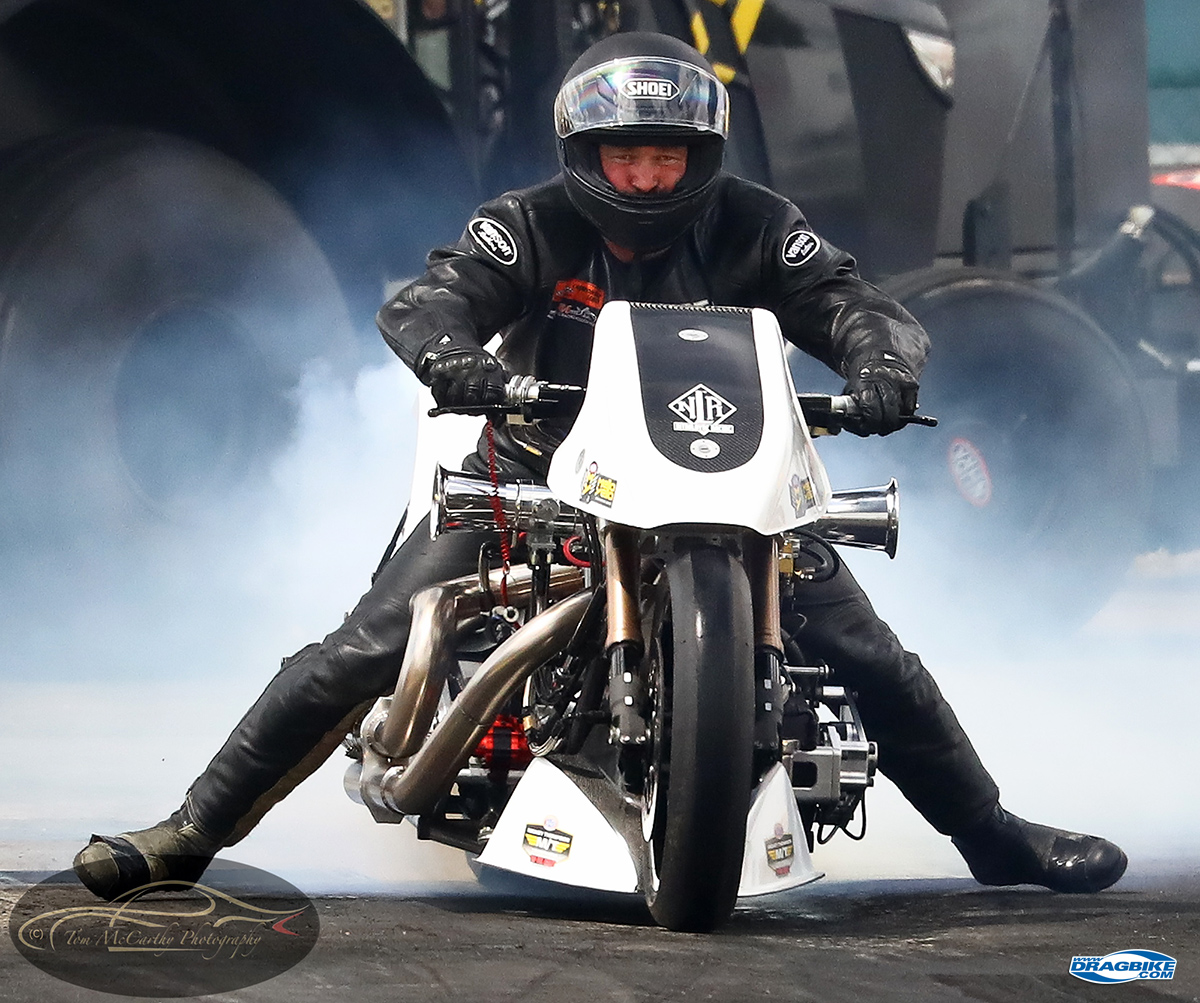 Rickey House, currently #4 in points can NOT be counted out of the championship points race. With this race and two more to follow, Rickey House and his Cat Spot Racing entry can run the number and win on any race track.  Luck has not been kind to Rickey in 2018, but he’s he’s fought hard as he always does and he’s in it, to win it.  Rickey lost an axel on his trailer on the way to the New England Nationals, but he limped in, made the repairs and he is race ready. 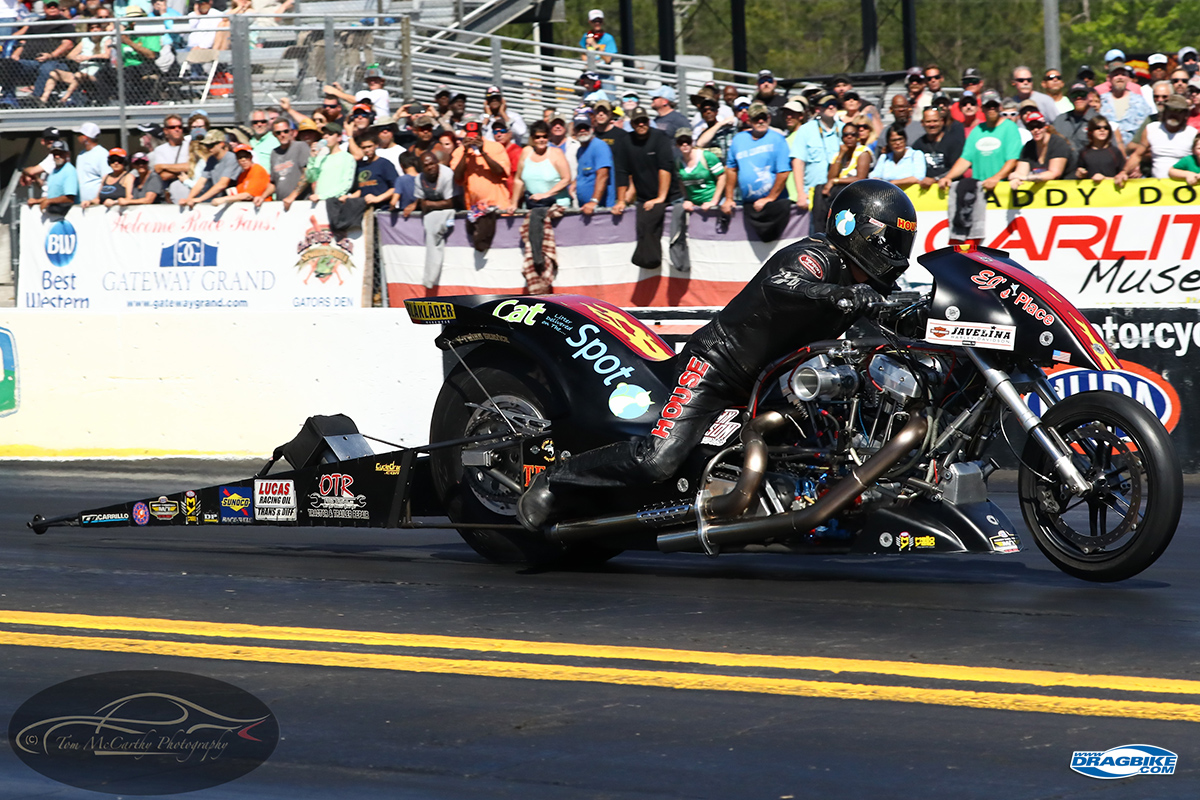 There are some new Top Fuel Harley motorcycles in the works that are worthy of mention here.  The all-new Vance & Hines TFH is ready for full final assembly and will see testing in the not too distant future. This is a 196 CID state of the art injected TFH, with a new John Storace “Weekend Frame” chassis. Mike Romine in creating the build with Doug Vancil and let there be no doubt, they will build a very competitive drag bike. 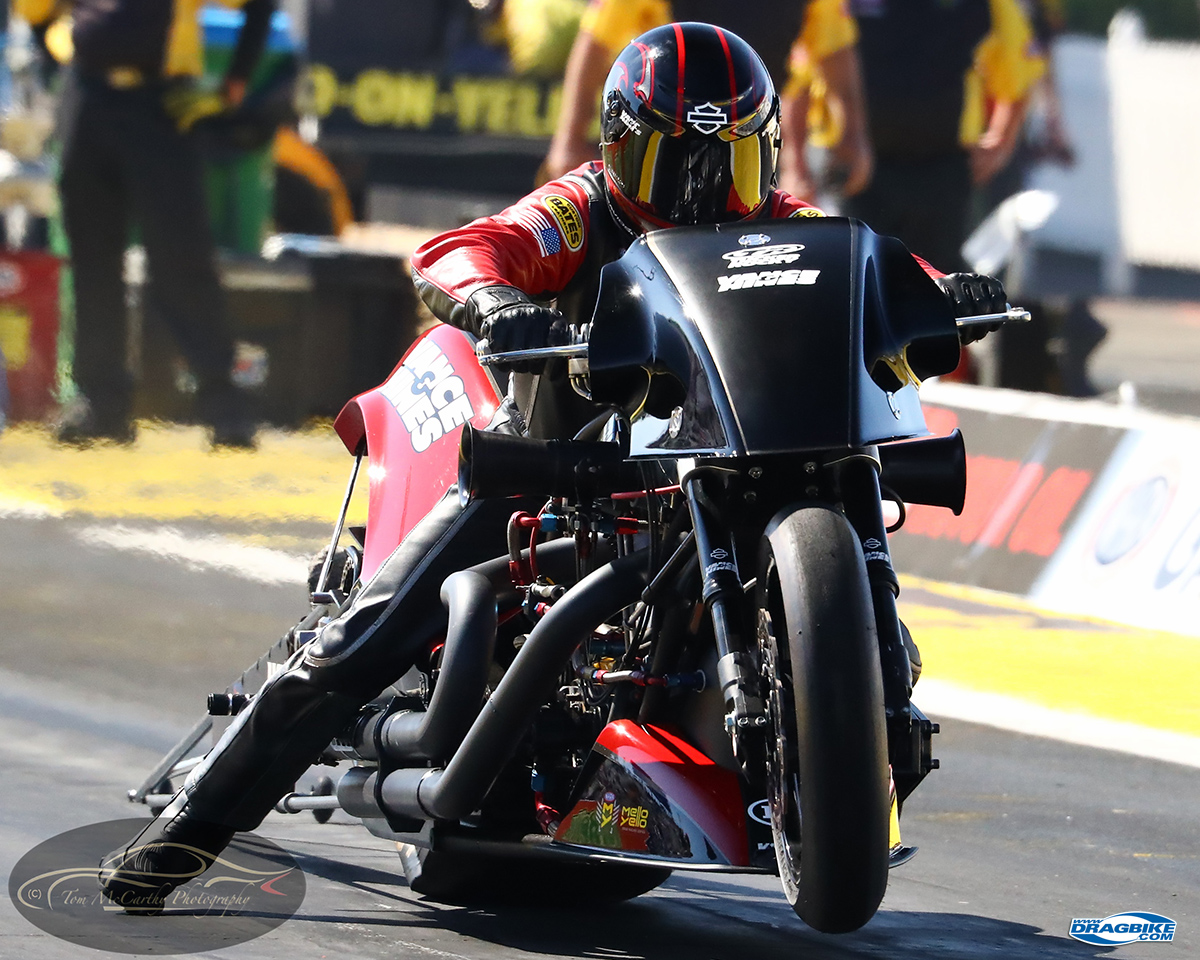 From Jay Turner Racing: The much anticipated, supercharged Top Fuel Harley created by JTR is close to completion. Jay commented, “We will have it out soon and begin testing – soon.” Jay’s focus of course is the current NHRA, Mickey Thompson Tires, Top Fuel Harley series, but this series ends in early September. There is still a lot of racing season left by Mid-September and this is the time of year when the bikes produce their quickest and fastest times. 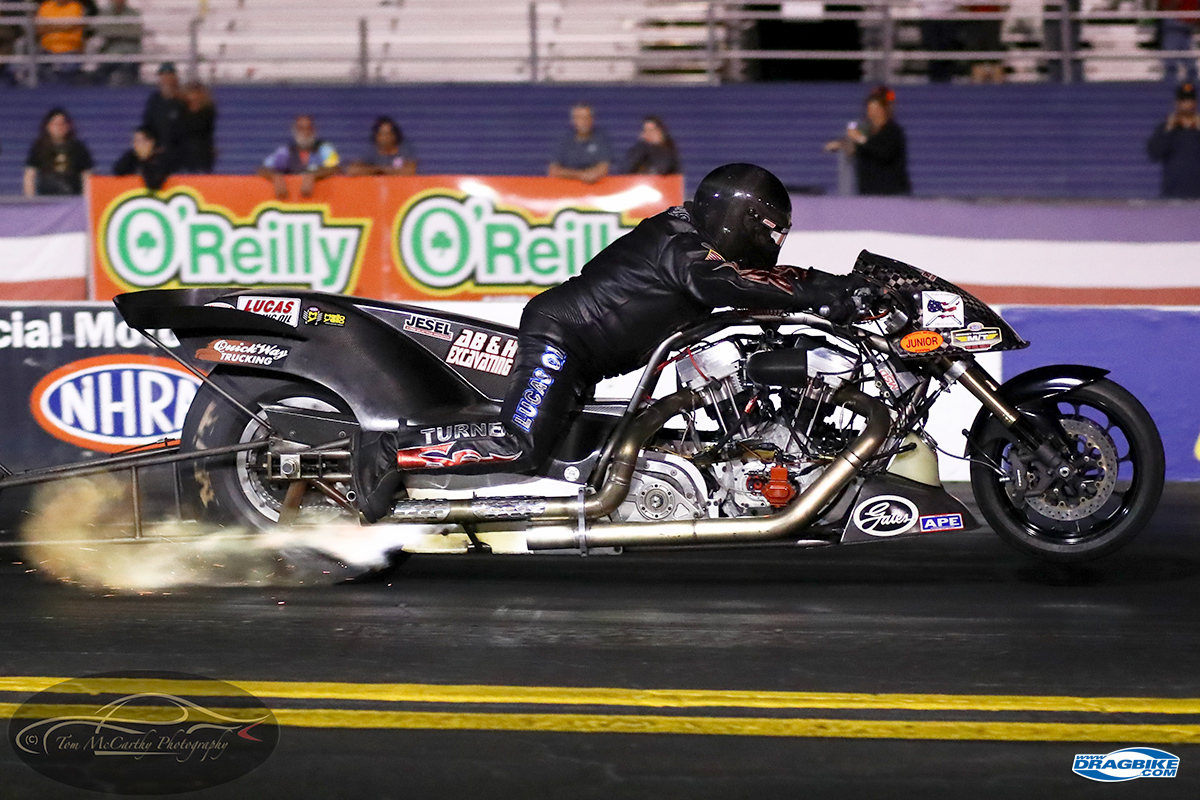 Watch for records to fall in the Fall. The Mickey Thompson Tires, Top Fuel Harley series ends September 3rd at the conclusion of the 58th running of the NHRA US Nationals at Indy. 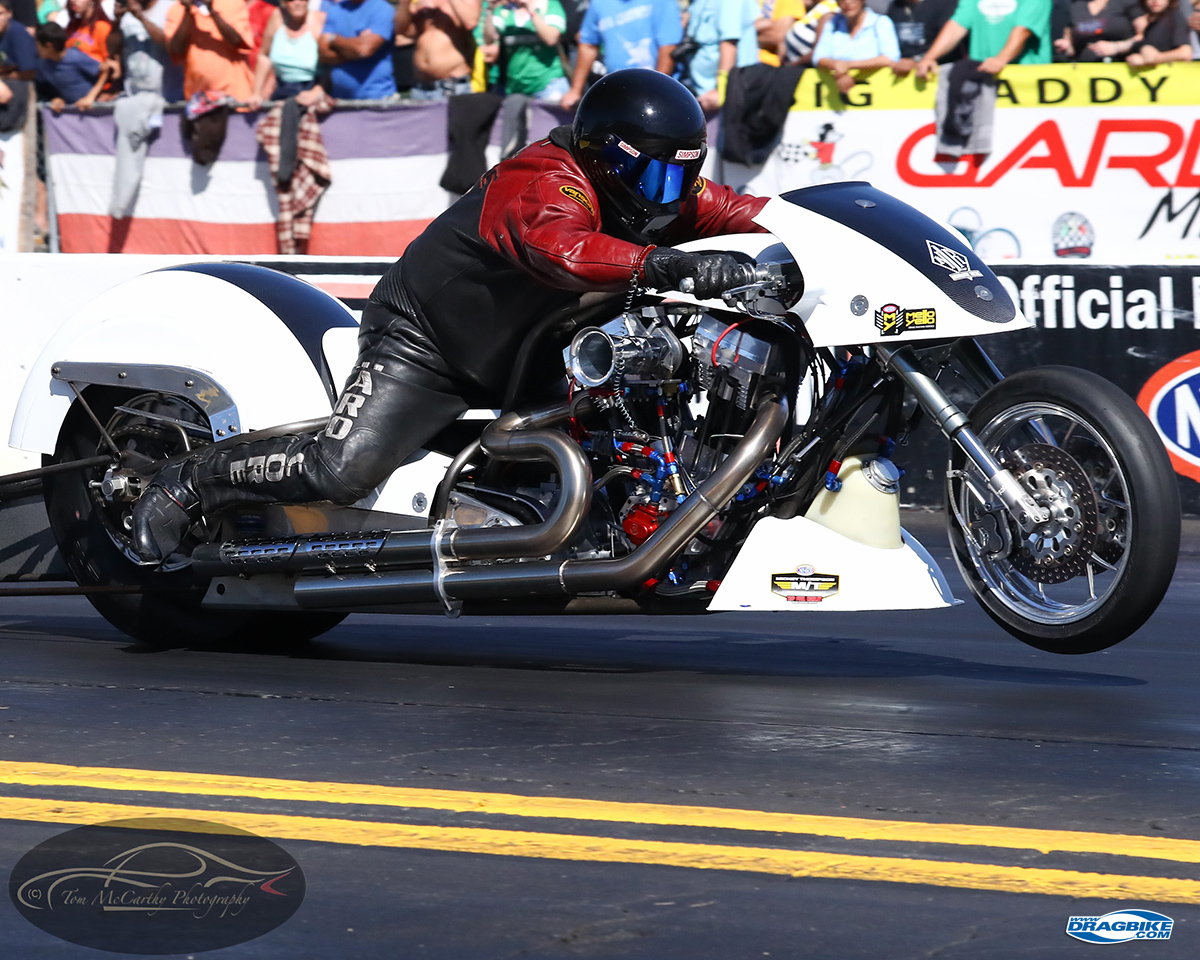 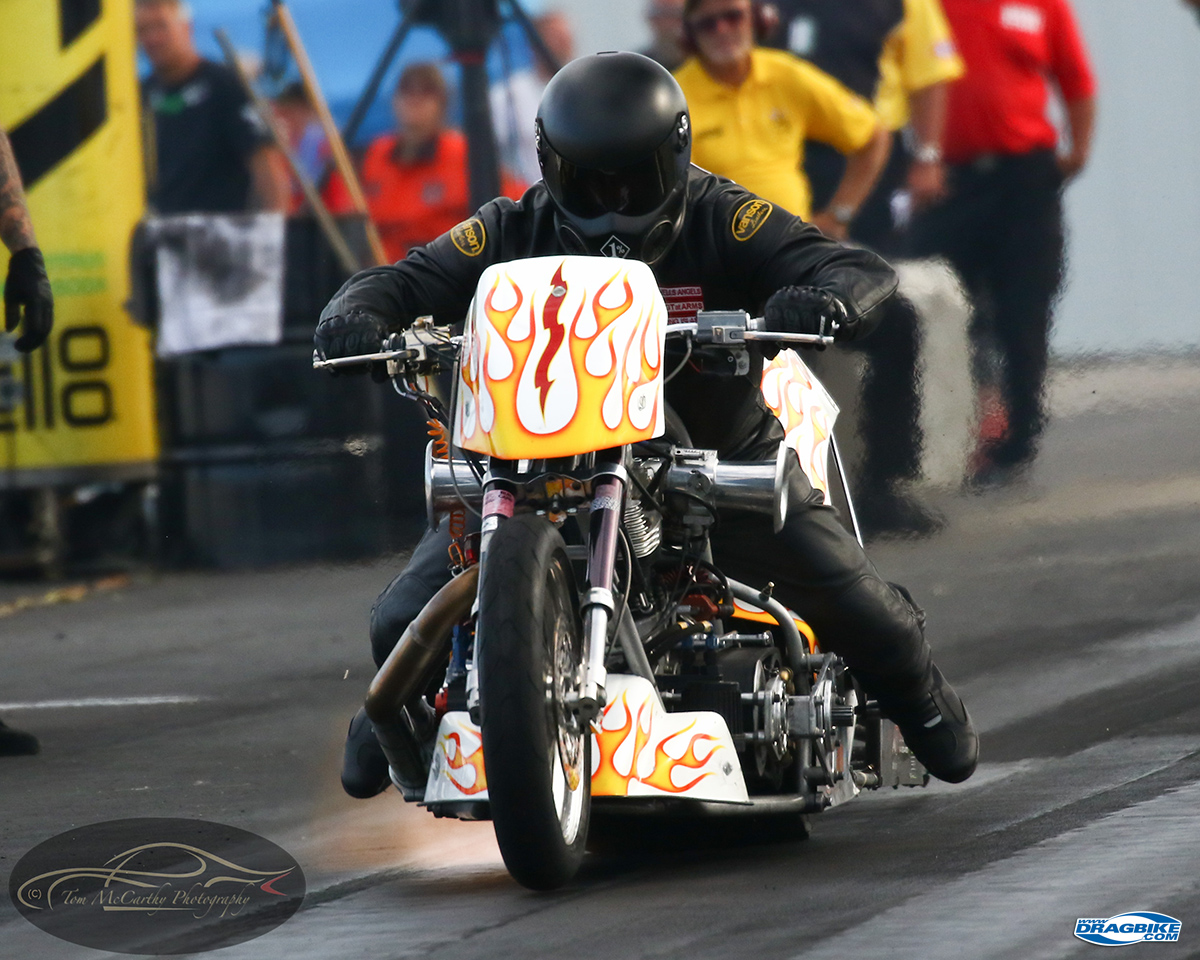 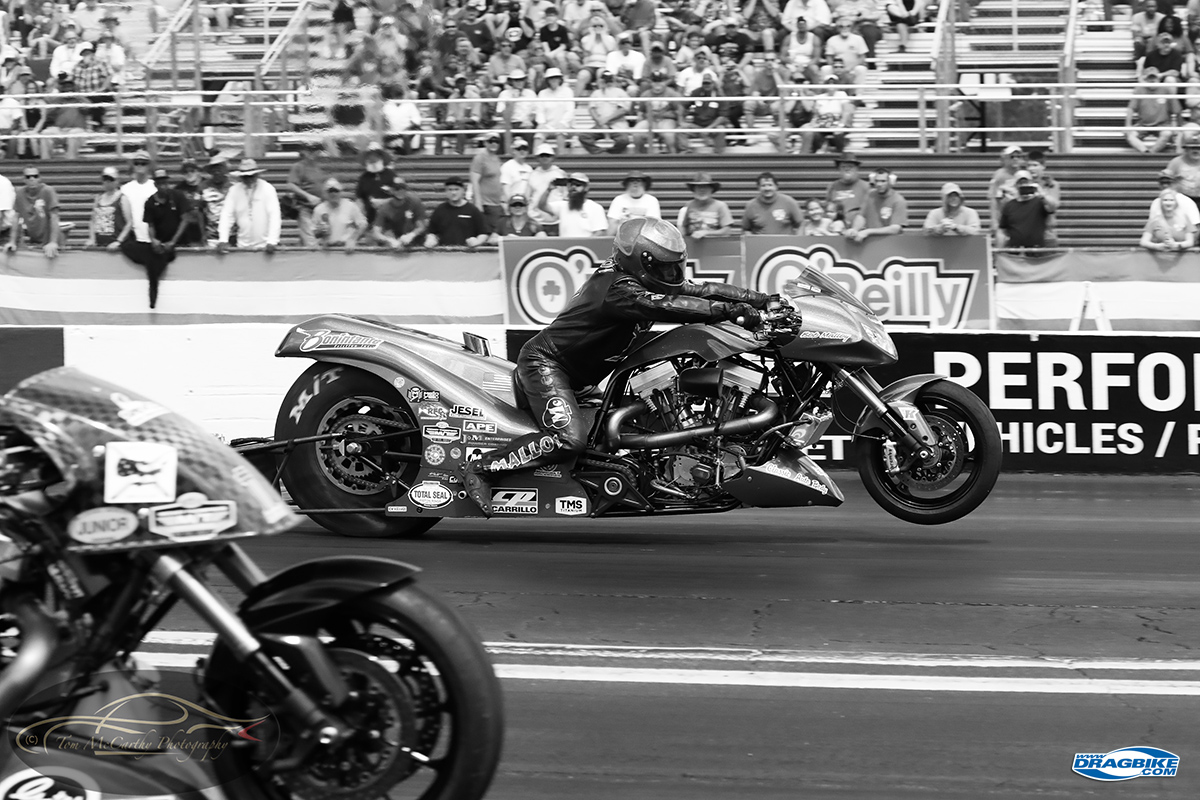 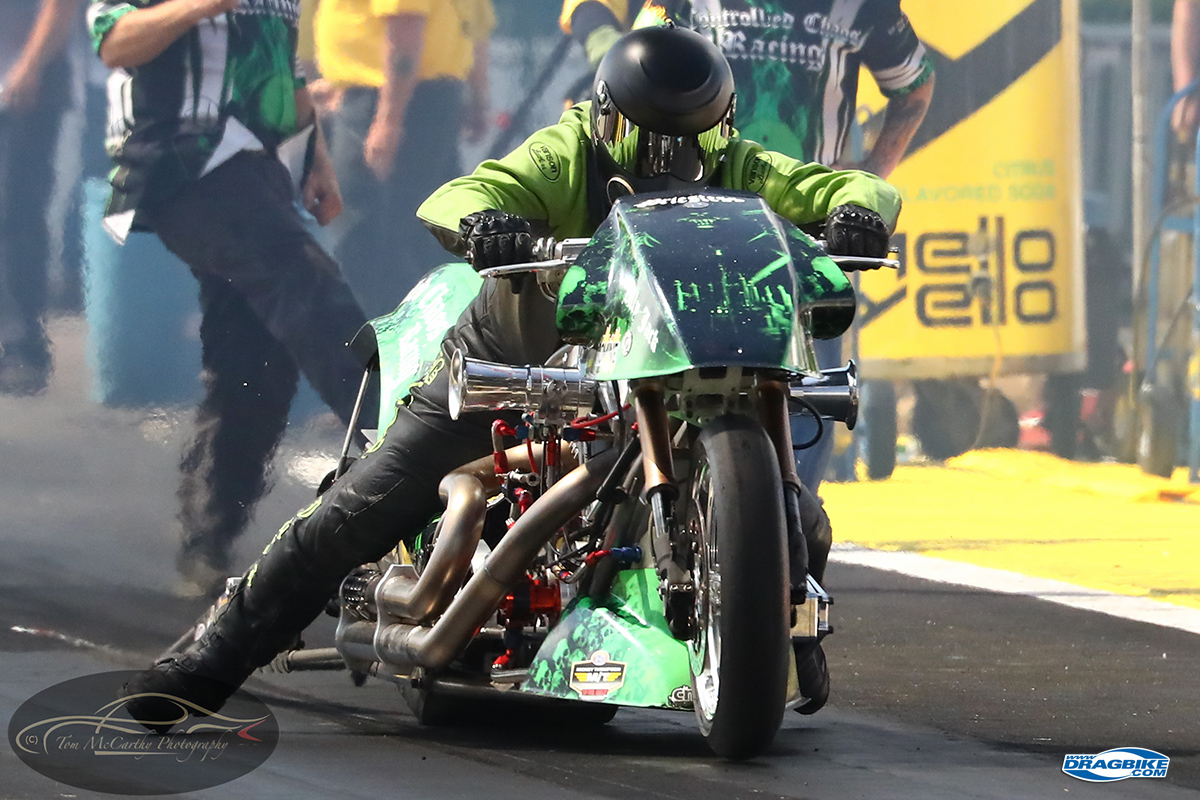 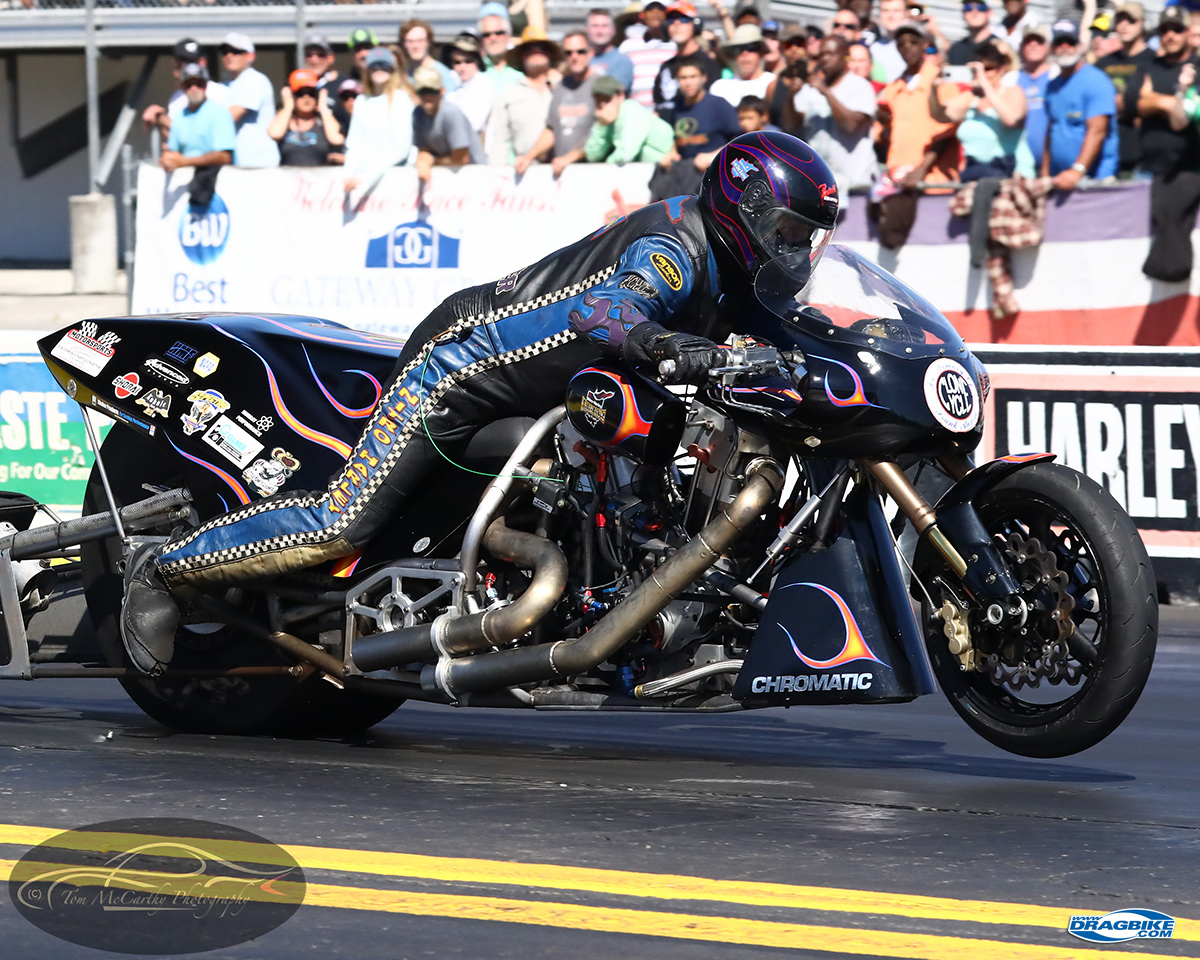 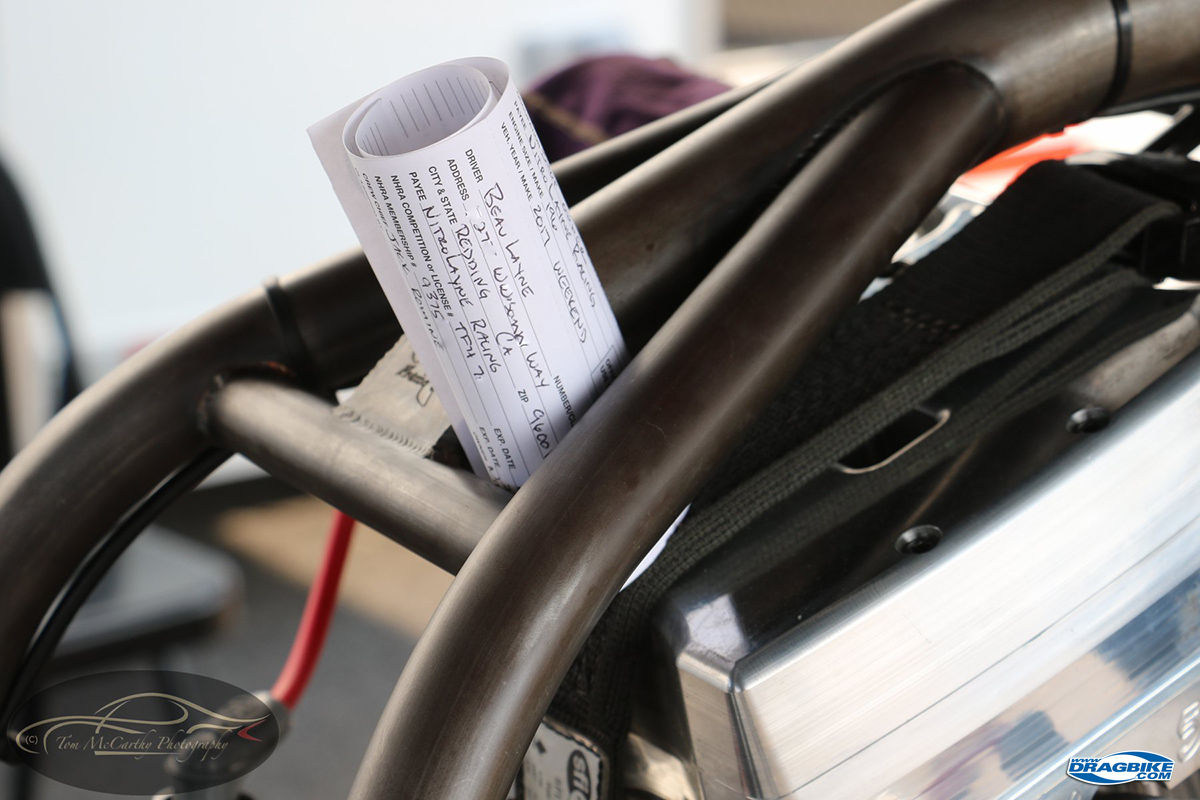 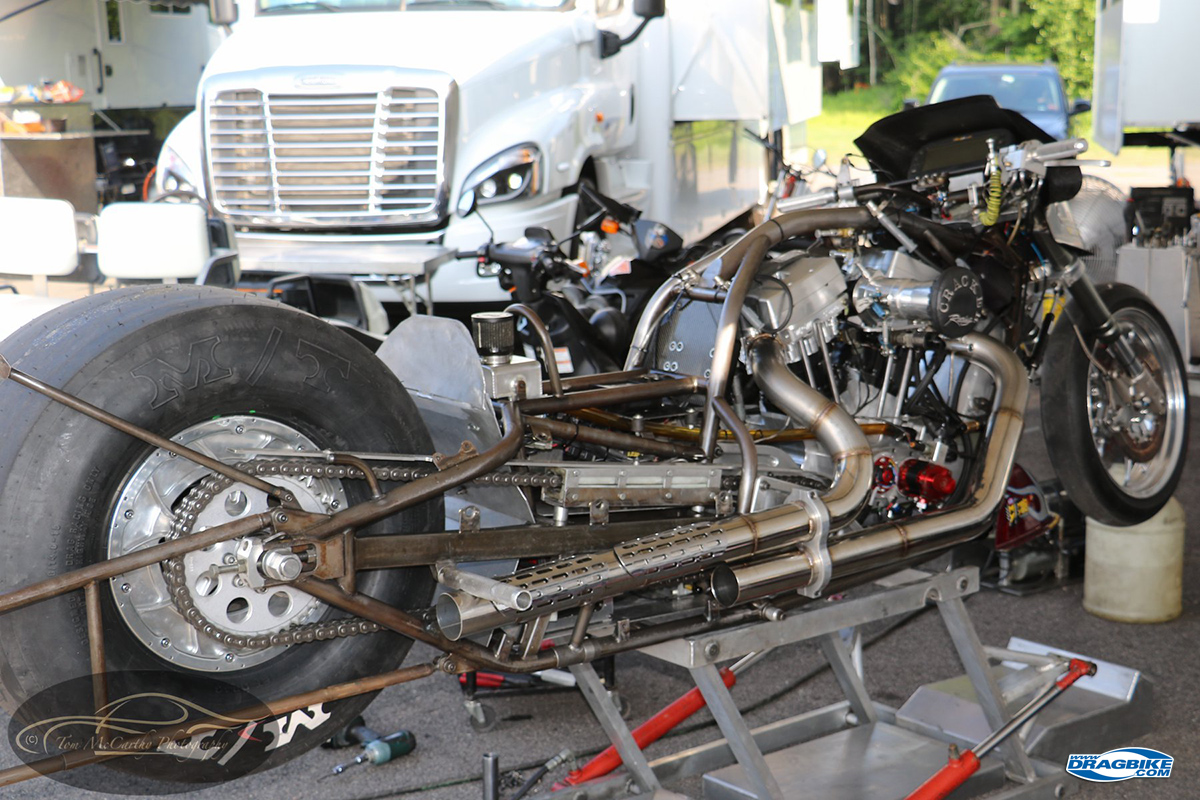 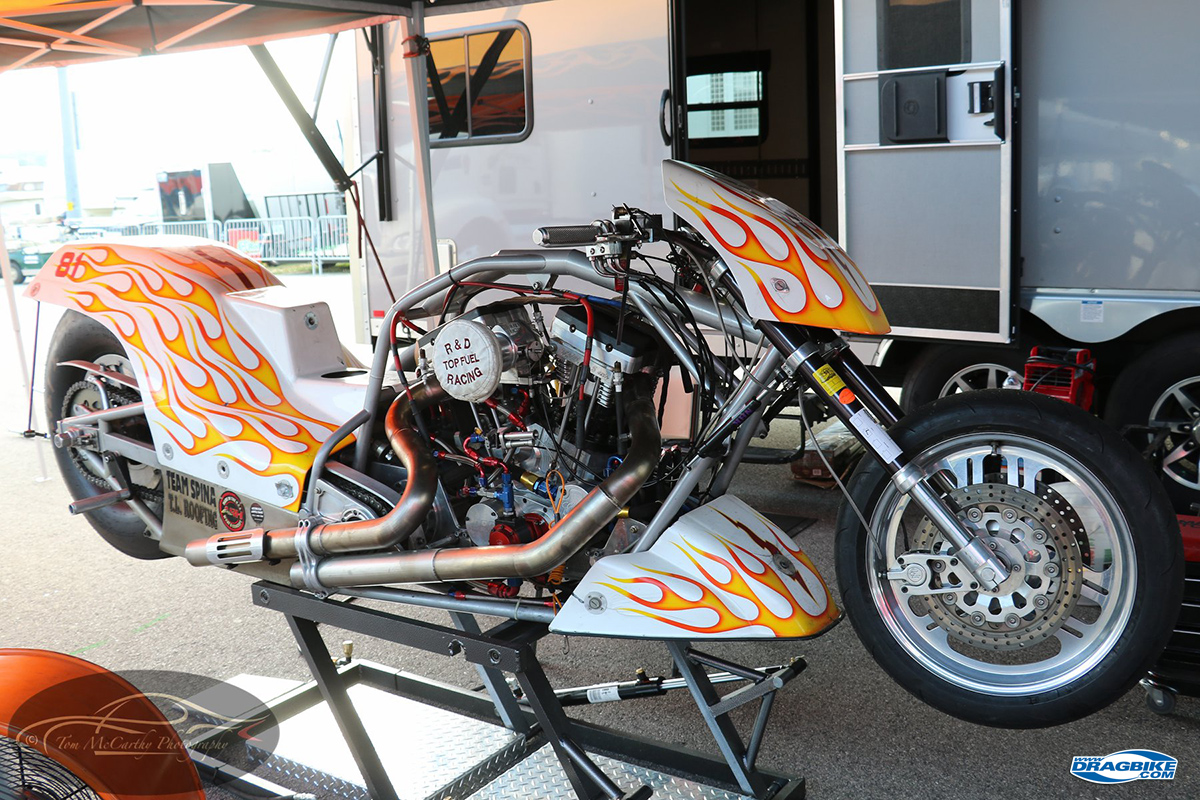 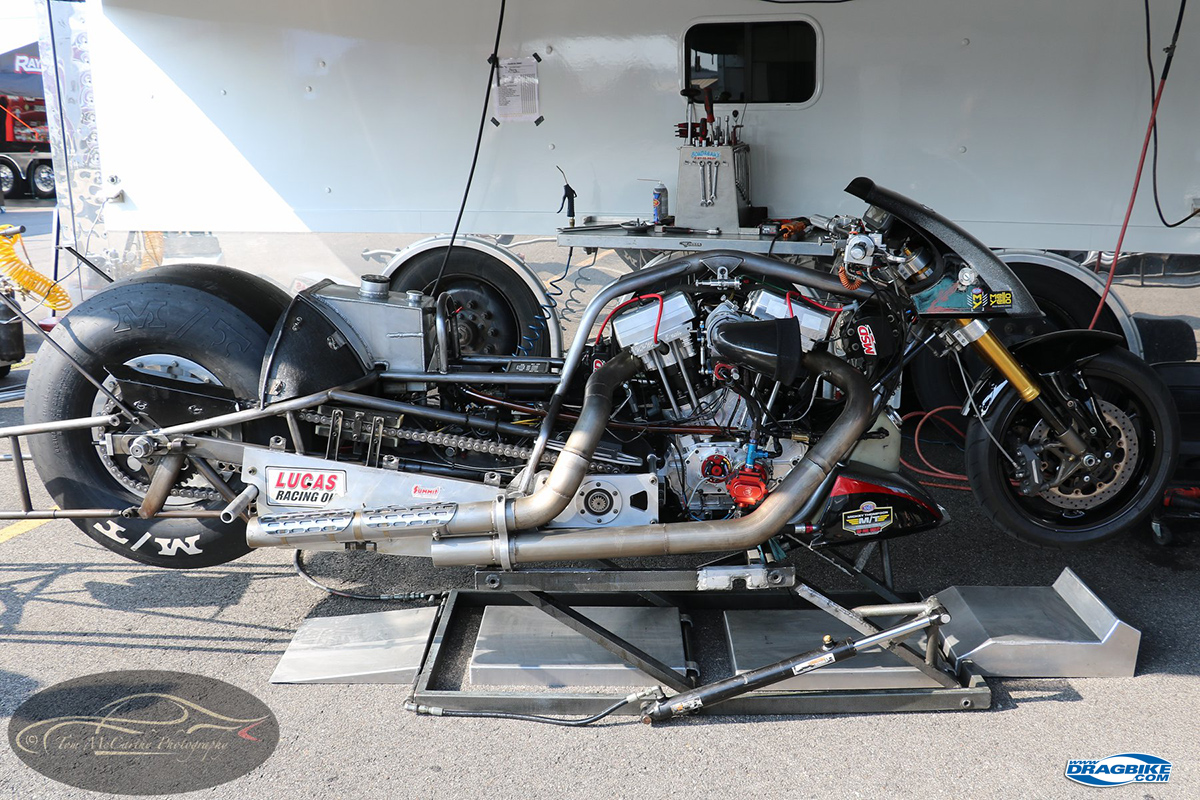 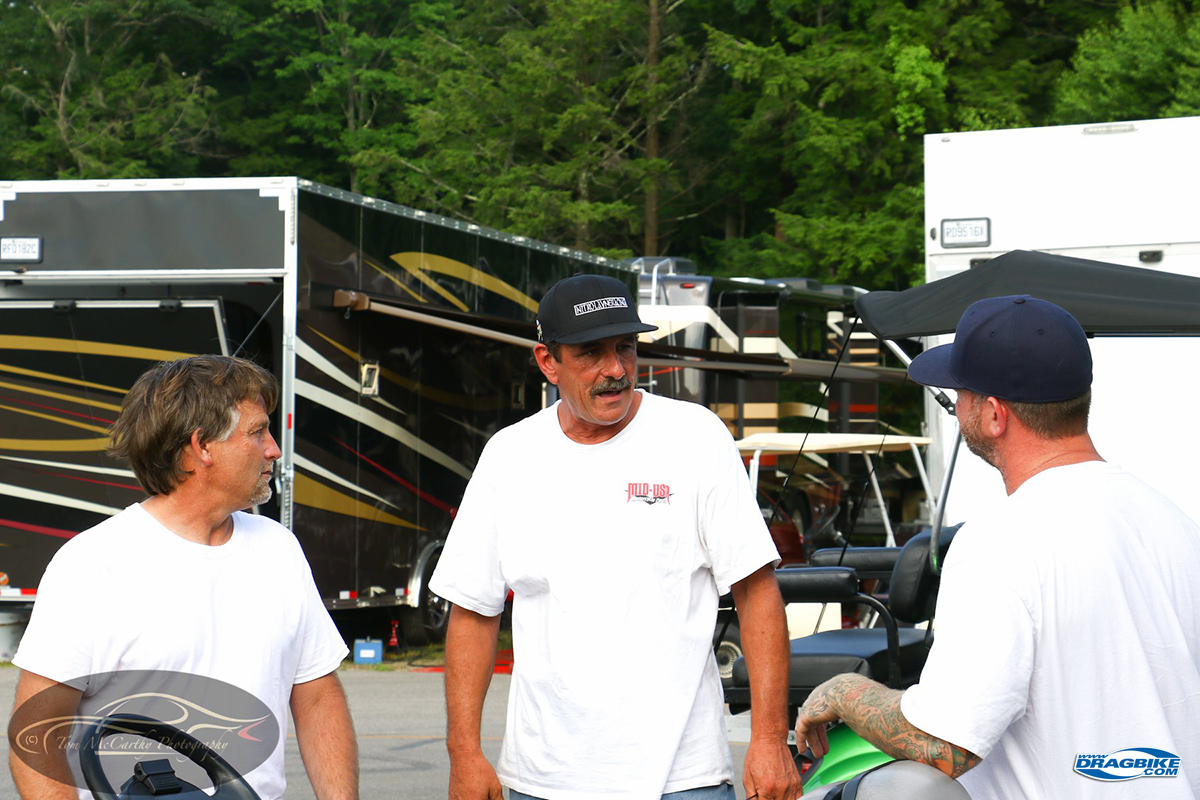 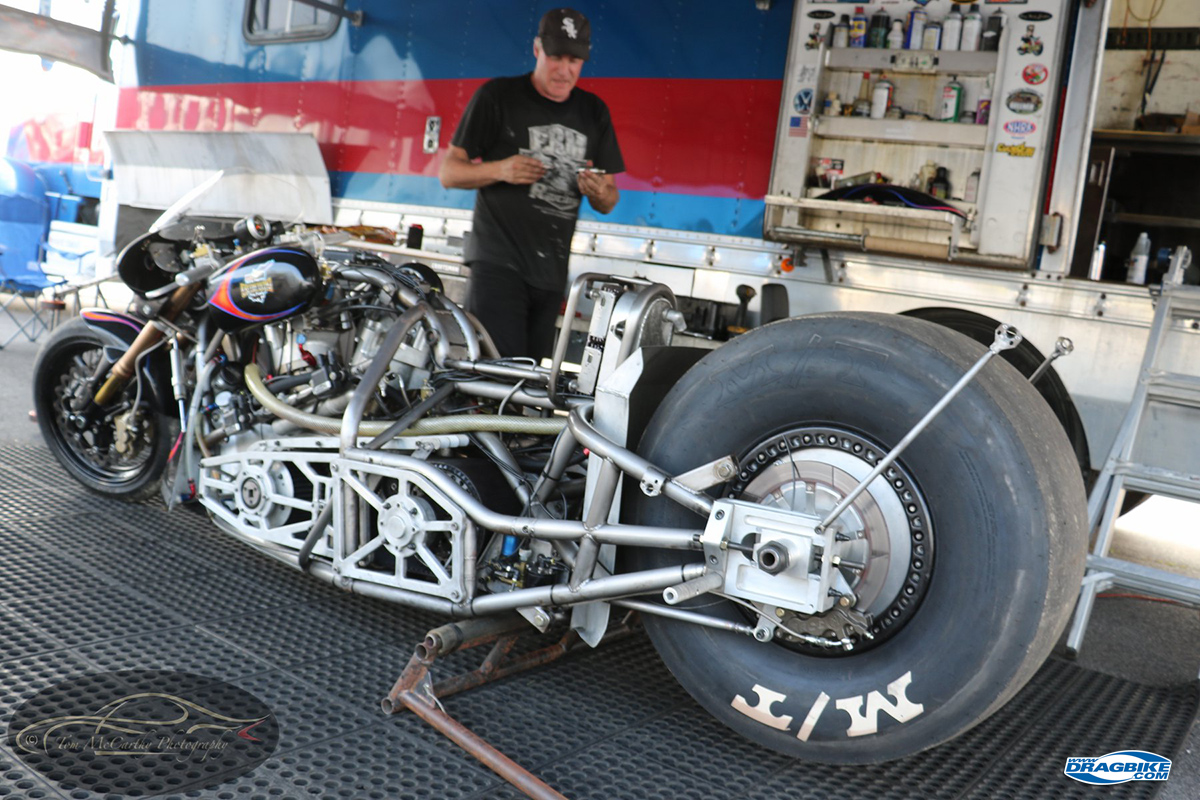 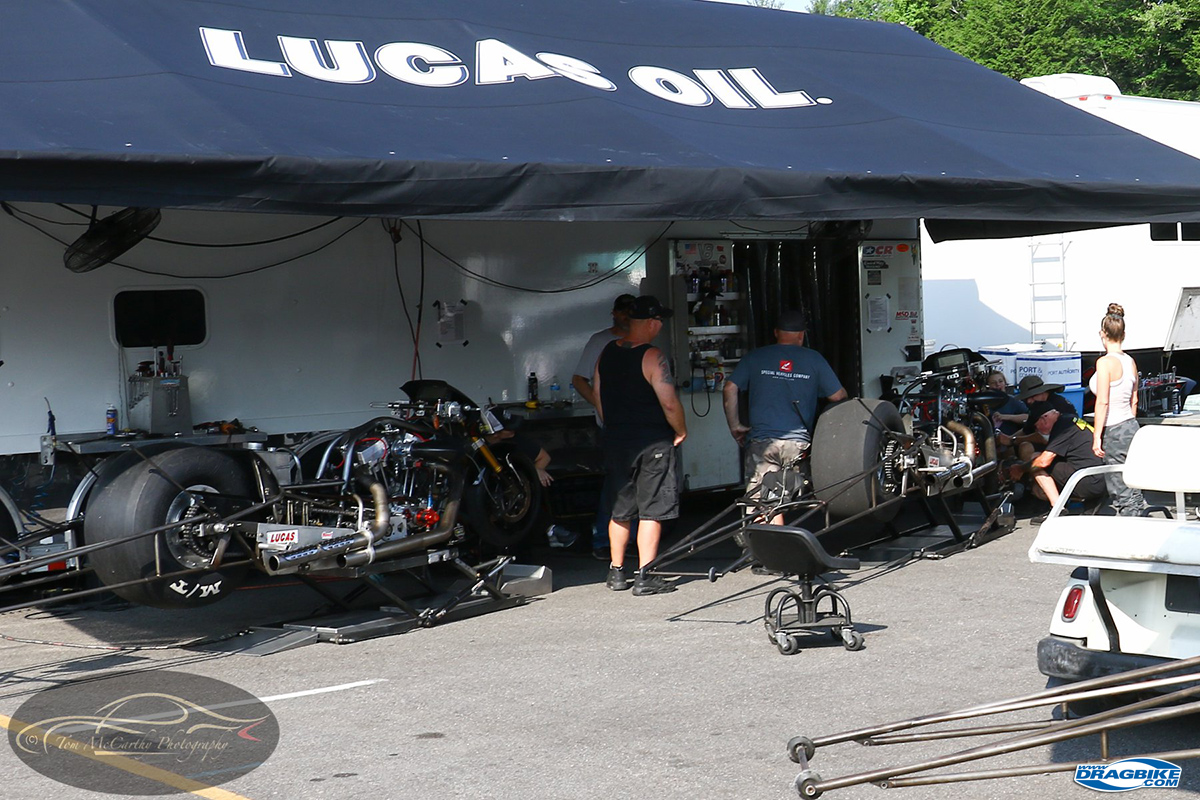 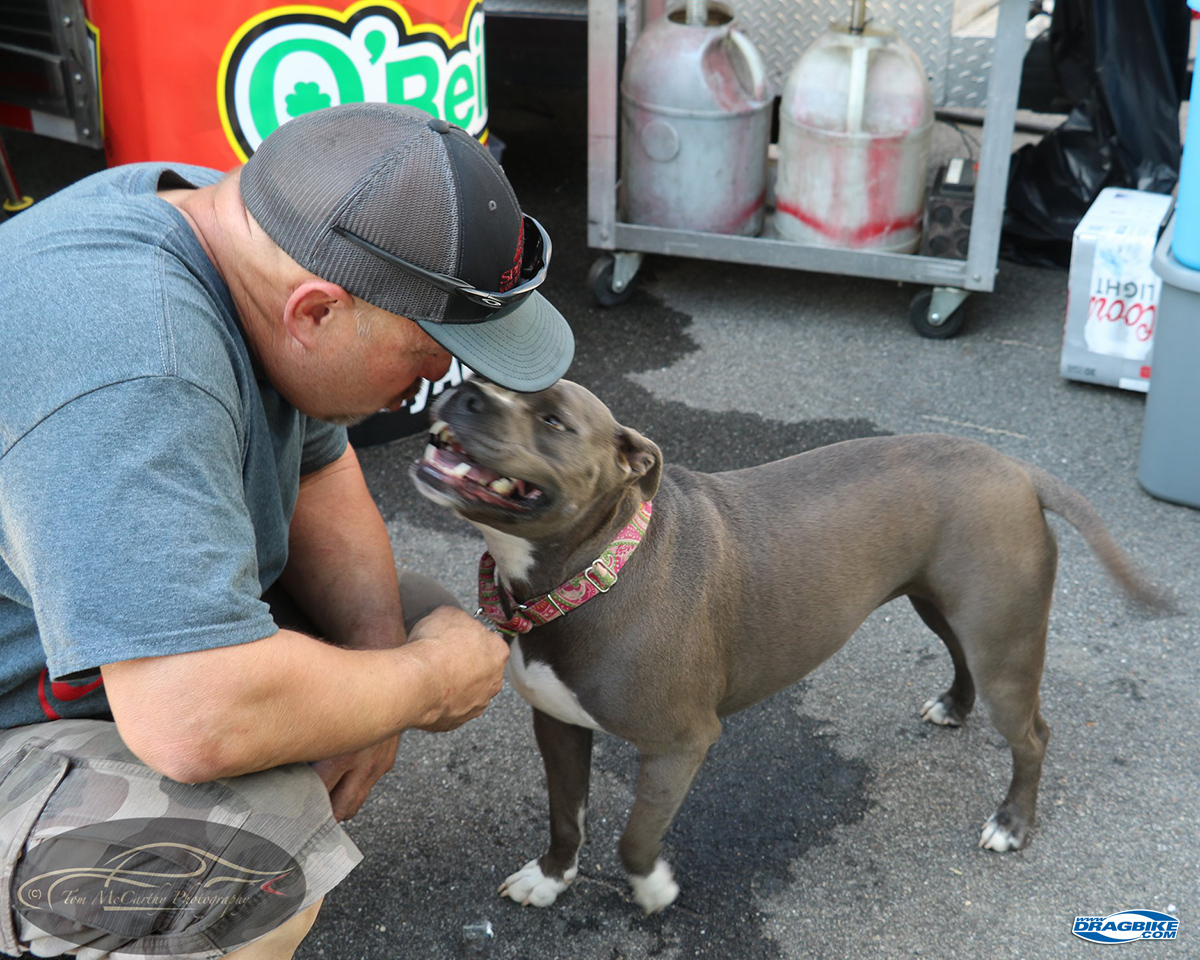