Ken Boyer, near lane, took down the Mickey Thompson Tires Nitro Harley champion Jay Turner for his first-ever Wally to close out the season by running a 7.888-second pass. That came while Turner had traction problems with his bike after grabbing an advantage on the tree in his sixth final of the year.

With three wins and five final-round appearances, Jay Turner claimed the inaugural Mickey Thompson Tires Top Fuel Harley title and was saluted Sunday at the NHRA Northwest Nationals, the final event of the season for the fuel bikes. The rider locked up the trophy at the penultimate event in Bristol with a runner-up finish against teammate Tii Tharpe thanks to a blistering start to the season. He only missed the final round in two races. 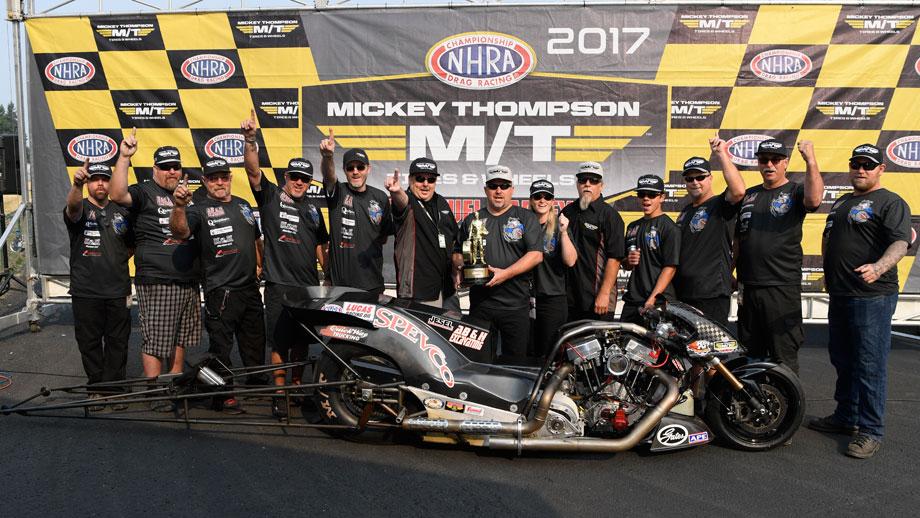 “It’s been a great year, not just for me but for our whole team,” said Turner, who’s been racing fuel bikes for 20 years. “Tii  is fighting for second place and between us we’ve won five of the prior seven races. It hasn’t been as smooth as the statistics say – we’re running the bikes harder than we’ve ever run them, so there’s more maintenance and parts wear — but we’ve got a really good crew and it’s been a good year.”

Turner got his season off on the right foot with a win against Rickey House at the Winternationals. He missed the finals in Phoenix, but got right back into the winner’s circle in back-to-back races in Las Vegas and Houston against Mike Pelrine and Bob Malloy. That further extended the lead for the five-time winner in the category.

He then moved on to Topeka where he runnered up against Mike Scott. That marked Turner’s fourth appearance in a final round in just the fifth race of the season. By that time, he had accumulated a whopping 393 points. The class counts the best six races of the season.

That came in handy the following event, as Turner only picked up 40 points in Epping, a season-low for the rider. He bounced right back at Thunder Valley, reaching the final round again. That clinched him the title, and helped teammate Tharpe climb the standings in the process.

In addition to Sunday success, Turner ran the quickest elapsed time of the season, a 6.117-second pass during Bristol qualifying. He qualified No. 1 in both Thunder Valley and at the Winternationals, while getting into the quick half of the field a total of six times during the season.