On Sunday during eliminations, it was the Jay Turner show as the Bull Dog from Julian NC, ripped through the field like a scythe harvesting all in it’s path.  Turner, who was the number one qualifier in Top Fuel Harley, was part of a very exclusive club for NHRA as all the #1 qualifiers won their respective professional classes at the Circle K, Winter Nationals: Jay Turner Top Fuel Harley, Leah Pritchet Top Fuel, Matt Hagen Funny Car and Jason Line in Pro Stock.

E-1 for the Harleys started off with Bob Malloy taking out Mike Beland in the first pair out.  Mike struck the tire just off the line and got out of the throttle and Bobby Malloy thundered on to the next round.  Ricky House had Tii Tharpe in the next pair to the line.

Sharkey had a late start but the big 196 CID Hawaya Racing engine just thundered horsepower with every expulsion of nitro and his machine just caught up to Tii and motored past him with power to spare.  The 196 MPH run by Tii was no match for the 217 MPH charge by Sharkey who just reeled him in.  Yes it’s ET that wins drag races but the magic of 1320’ of racing if even if a machine is quicker, given enough race track, ya just overpower him and Rickey House did just that.

The next pair out, Kevin Boyer Vs Tracy Kile: Kevin attacked the tree with a great .012 RT, but Tracy’s horsepower just motored past Kevin by the 400’ mark and Kile took his Bad Apple Racing machine into the semi-finals.

E-2 started off with Ricky “Sharky” House matching up with Tracey Kile.  Rickey got out first with a .069 reaction time to Tracey’s .099 and once again the Thunder Shark was on the attack.  House pounded out a 6.40 elapsed time to Tracy’s 6.77 and Rickey’s 218 MPH was again, just running away from the competition, 1320’ later.

As for JT’s match up with Bobby Malloy; these two veterans of several decades clashed like the Titans they are.  As the four ambers lit to yellow, Bobby Malloy responded with a .032 light to Jay’s .037 and it was a great drag race to half track that had the NHRA TV announcers really motivated in talking about the front tires in the air, side-by-side racing and they way the fuel bike pilots had to use body English to steer the bikes.  Jay crossed the finish line first with a 6.27 @ 225MPH to Bobby’s 6.50 effort.

In the final round it was all over on the starting line.  Rickey House fouled out with a .028 reaction time that had him shaking his head the moment he did it.  He then got out of the throttle for a millisecond, then hammered it again out of frustration and thundered on to a 6.69 @ 203 MPH pass.  Meanwhile Jay Turner laid down a 6.27 @ 218 for the win and a trip to the winner’s circle.

The essentials for the Top Fuel Harleys in competition for this race were actually televised on National TV, sometimes in live view, on FS1, that’s Fox Sports 1.  This is the first time Top Fuel motorcycles have received this kind of TV coverage during a Mellow Yellow race with the NHRA.  A marketing sales door has been opened for the T/F bikes they’ve always wanted and needed.  The motorcycle drag racing community owes the NHRA a great thanks for this.  And hat’s off to the Top Fuel Harley teams that have worked so hard for this for decades. 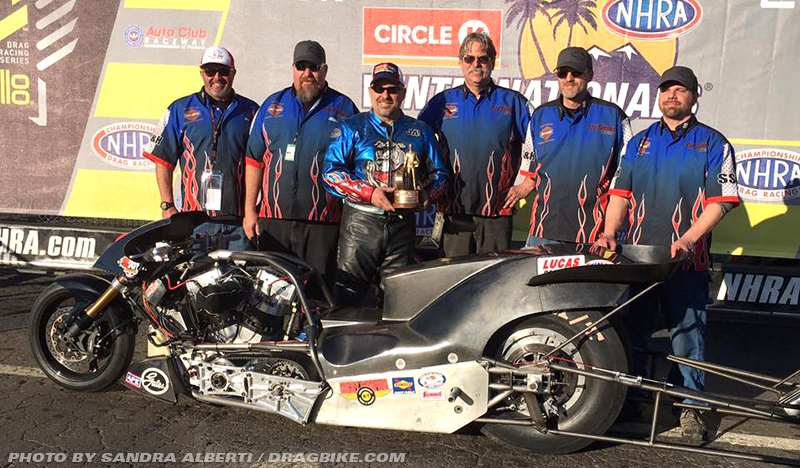 Turner takes the first win of the 2017 season over Rickey House who gave it away before it started with a red light.

The motorcycle drag racing season officially got underway this weekend with the Top Fuel Harleys leading the way via their inclusion into the NHRA Mellow Yellow series.  Ten T/F bikes entered the Circle K Winter Nationals, in Pomona, California.

There were rain delays throughout Saturday qualifying necessitating the Harleys only having two shots to qualify.

After all the tire smoke and nitro fumes subsided, Jay Turner, of Julian, NC was the #1 qualifier with a stout 6.44 @ 212 pass on Saturday.  Considering this is a brand new build with zero testing prior to this race, his 6.67 on Friday and the 6.44 on Saturday’s Q-2 indicate he’s got a good handle on things already.

The Top Fuel bikes are already putting on quite the show for the NHRA fans.  Aside from the exciting side-by-side wheels-up, flames belching runs of the world’s fastest and quickest T/F Harleys, the thrills of competition do get interesting.

On Friday during Q-1, Dustin Werner suffered an engine explosion and a fragment from the motor winged his right arm, penetrating his leathers.  He required 6 stitches for that, but he’s fine.  The motor damage was so extensive it ended his weekend of racing.

Not to be out done in the thrills & chills department, on Saturday during Q-2 action, Ricky House had an exciting pass when his parachute failed to open.  Ricky on the Shark Attack Top Fuel Harley, almost ended up in the sand trap, after running out of race track.  But with repairs Saturday night, he should be ready to race on Sunday as he’s currently qualified 6th