The team from Numidia Dragway raced to the coveted Team Championship at this weekend’s NHRA Summit Racing Northeast Division Finals at Atco Raceway.  The Numidia, Pa., team racked up 72 points for the easy win with Cecil County Dragway and Island Dragway settling in at 50 and 43 points for the second and third positions.

Frank Szeg, Brock Moshier, Dan Caissie and Mark Schwalm captured individual championships and now advance to the NHRA Summit National Championship in Auto Club Raceway and the Auto Club Finals in Pomona, Calif.  Joining these four will be the Pro Race of Champions winner Steve Dunn who will round out the 8-car field in Pro.  A special drawing was held earlier this year and the Northeast division was drawn to fill the eighth spot in the Pro class.  The eighth spot in Super Pro, Sportsman and Bike/Sled will be filled by racers from other divisions.

Dan Caissie raced to a runner up finish in Friday’s Race of Champions then took it one step further, taking home the Sportsman trophy on Saturday.  Caissie, Thompson, Conn., cruised to the win when Roger Dalton Jr. left early with a red light foul start.  Cassie ran it out to a 12.486 at 81.57 mph

The final in Bike/Sled was a good one with Mark Schwalm, New Ringgold, Pa., knocking out Ron Blake, Oxford, Conn.  Blake was out first but Schwalm ran him down with a 7.755 second lap at 161.63 mph

A High School class was also contested with Brent Novitsky taking the trophy back to Slatington, Pa., with a lap of 12.512 at 108.56 in his Trans Am.  Vincent Branca, Norristown, Pa., had a foul start, handing the win to Novitsky.

In the Race of Champions action that pits the top points earners from each track in head to head competition is was Dale Crouch, North East, Md., leading the charge as he ran dead on his dial of 7.63 at 174.73 mph to take out Todd Martin, Highland Lake, N.J., with a 7.547, 176.86 in the Super Pro final. 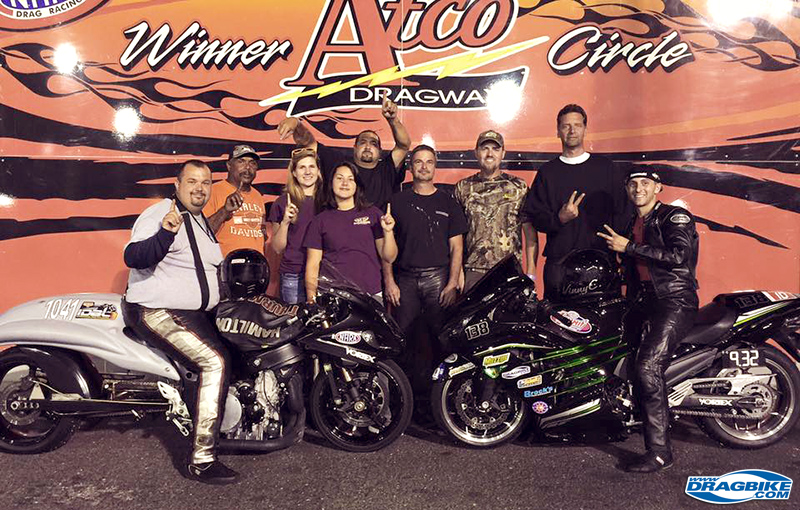 Rounding out the winners list was Dale Hamilton out of Mount Airy, Md., in the Bike/Sled class taking the win light right at the start when Mark Schwalm left early giving Hamilton the win.  Hamilton covered the quarter mile in 9.598, 135.62.

The following are final results from the 2015 NHRA Summit Racing Series Northeast Division Race of Champions: