The Lucas Oil Drag Racing Series strolled into Las Vegas, Nevada November 6-8 for race 7 of 7 in the NHRA Pacific Division 7 series. This is the Grand Finale, so to speak, as it is the final divisional race in the country and what a place to have it The Strip at Las Vegas Motor Speedway. Racers from all over the country in all divisions are well represented here as they try to capture the dream of divisional and national championships. This also includes the Sportsman Motorcycle Series presented by Harley Davidson. 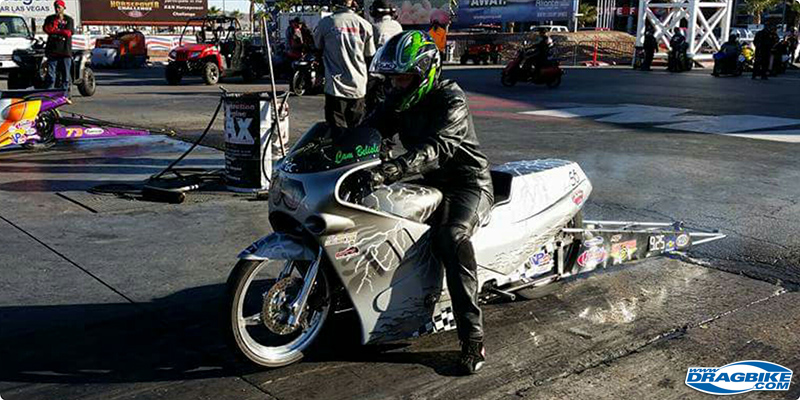 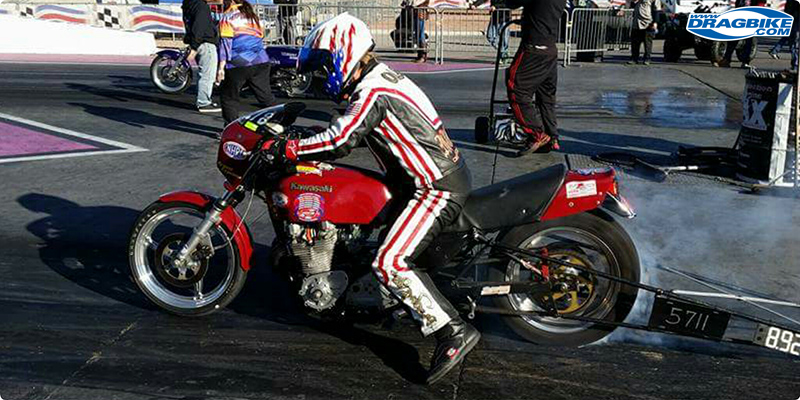 Kyle Olson and Cam Belisle warm things up in qualifying before they get ready to battle it out for The Division 5 championship on Sunday.

The sportsman motorcycle series is only run in 4 of the 7 divisions, divisions 1, 2, &3 do not have a sportsman motorcycle class. Divisions 4, 6, & 7 points leaders had already locked up their championships however the Division 5 title was still up for grabs for 2 riders and they were both in attendance. It was pretty clear cut, current points leader Cam Belisle couldn’t gain any more points and the 2nd place rider Kyle Olson had to win the event in order to take the title. Kyle whom normally rides a hayabusa had made some changes and couldn’t get it sorted out in time. He would instead be riding the SamCam Racing Kawasaki GPZ borrowed from Cam Belisle & Bruce Sampson. 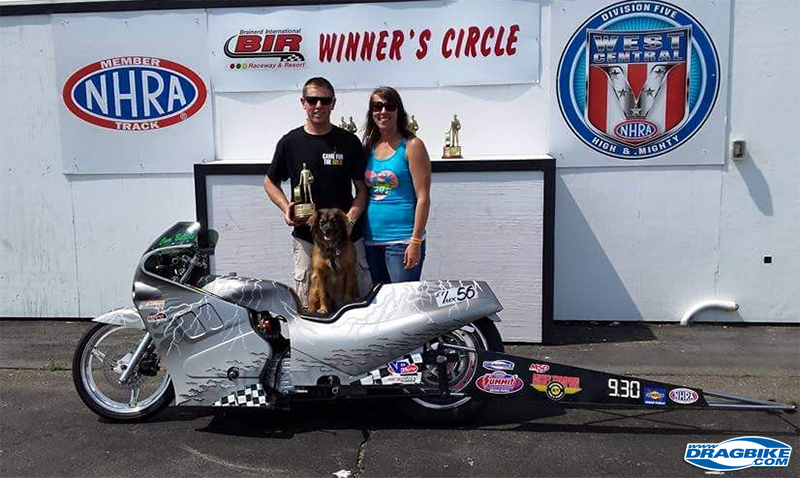 The event schedule was to have 1 qualifying pass Friday then 2 more Saturday with final eliminations Sunday. Friday’s qualifying round didn’t happen until about 7pm as there were roughly 850 entries at this event. As the bikes started to make their runs Rick Newport posted a .003 reaction time to set the pace for the #1 spot. Saturday would have 2 more rounds of qualifying and once again Rick Newport would lead the pack bettering his first round qualifying effort with a .001 reaction time. That meant someone would have to have a perfect .000 reaction time to be #1. After the final 2 rounds of qualifying no one would better Newport so he would claim the #1 spot and earn a first round bye run Sunday morning. 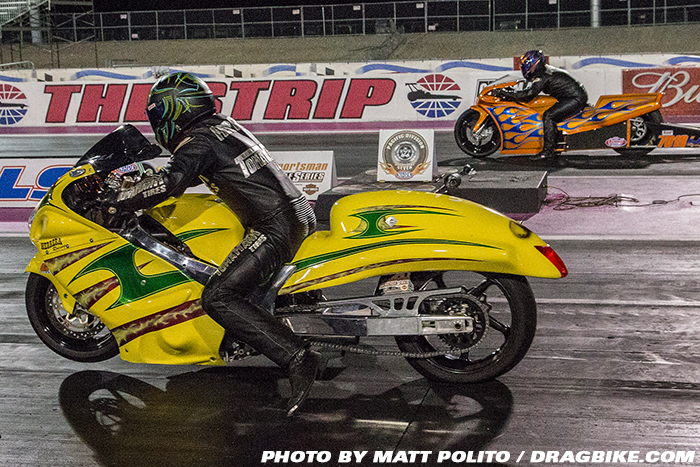 ​Augustine Herrera would get the advantage at the starting line but couldn’t hold off Mike Burkhart in the final.

Sunday’s elimination ladder was set for the 35 bike field. Kyle and Cam ended up on the same side of the ladder and if they got far enough they would meet in the 4th round and race for a bye run into the final. They day started off with excellent weather and a lot of good racing going on. Kyle and Cam would both get the starting line advantage against their respective opponents and turn on the win light. In the second round Kyle would face the #1 qualifier Rick Newport. Kyle would get the automatic win when Newport turned on the redeye at the starting line. Cam would race Jake Havens and use a starting line advantage to turn on his win light in round 2. 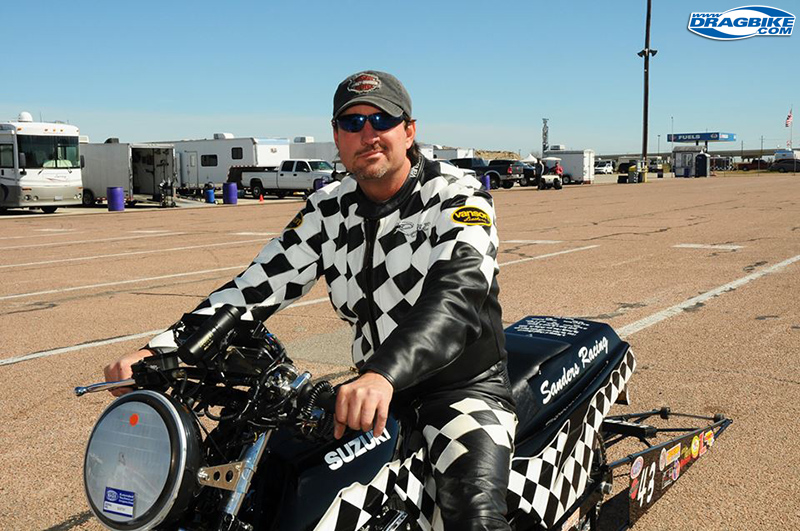 Division 4 Sportsman Motorcycle Champion Robert Sanders. ​Robert became the first one to win Back to Back Championships in the Division 4 Motorcycle class.

Round 3 started and this was a big one for people fallowing the points battle for Division 5. If Kyle and Cam could win they would meet head to head in the fallowing round with a Championship in the balance. First up Cam would race Pro Stock Bike rider Kalifornia Katie Sullivan but unfortunately he would go red giving Katie the automatic win. A few pairs back Kyle would race Mike Burkhart who was having a stellar day thus far. Cam quickly rode back to the starting line to watch. Kyle left first and was clean and green, Mike Burkhart left second and drilled the tree with a .004 light, having the starting line advantage Mark was able to real in Kyle before the finish line for the round win running 8.13 on an 8.12 dial in.

With Mike Burkhart winning round 3 Kyle’s championship run was over and Cam Belisle would be crowned the 2015 Division 5 Sportsman Motorcycle Champion. But the racing was far from over. Mike would use a starting line advantage once again to beat Katie Sullivan in round 4 and earn a bye run to the final. On the other side of the ladder Augustine Herrera was quietly and consistently making his way through eliminations. He had run 8.49 in all of the first 3 rounds and ran an 8.464 on an 8.46 in his round 4 bye run to the Semi-Finals where he was set to race Don Richter who had been running consistent 9.15s. Don would unfortunately go red in the semis leaving Augustine to face Mike in the final. 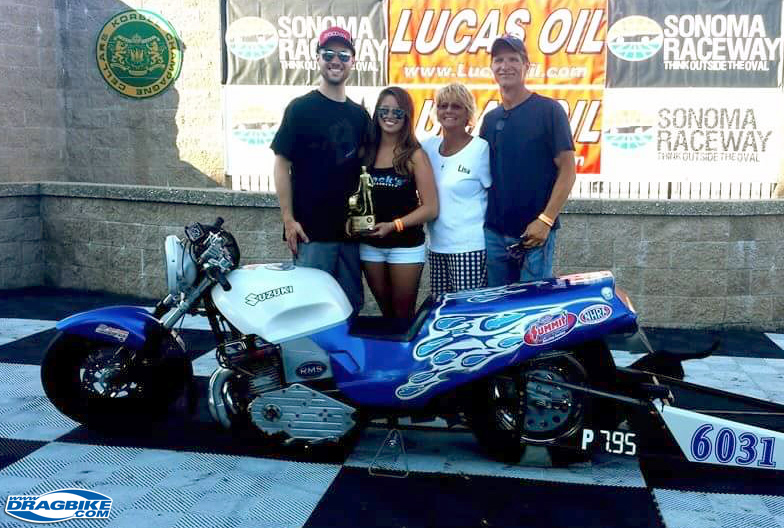 Jake Havens won 2 Divisional events including this win in Sonoma on his way to the Division 6 Championship.

In the final round Augustine would have the starting line advantage of .001 to Mike’s .024 but it wouldn’t be enough. Mike would reel him in running 8.121 on an 8.12 dial in for the win. Augustine’s bike fell off pace a bit running 8.48 on the 8.45 dial. Congratulations to Mike Burkhart on a great victory. This was his second win of the season which locked him into 2nd place in the Division 7 points. 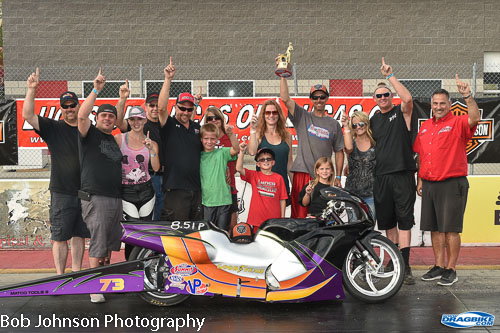 ​Rick had an amazing season winning 4 races with a streak of 3 in a row.

With all the racing being over I would like to congratulate all the champions in their respective divisions and say thank you to all the great people I have met this season. I have traveled a lot this summer and met a lot of new people and made some new friends as well. I look forward to seeing you all again next year and hopefully see some new faces too. Enjoy the off season or if you are fortunate enough to still be racing keep the rubber on the asphalt. 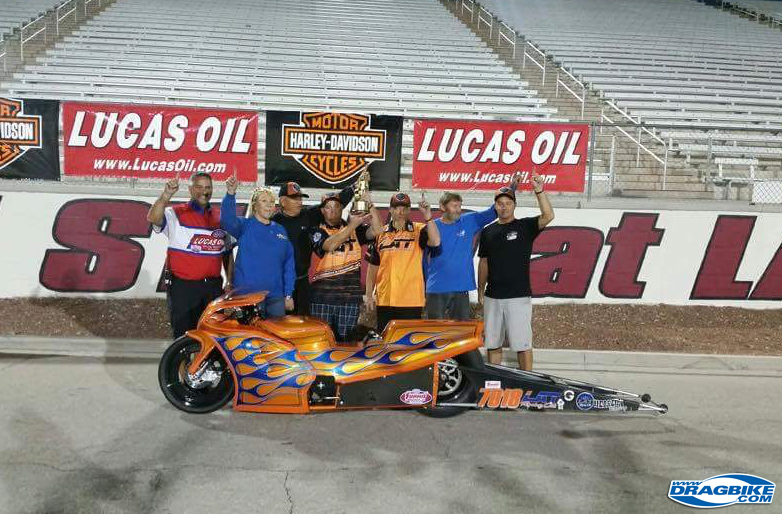