Stoffer capped off a resurgent weekend in Pro Stock Motorcycle, winning for the first time since 2019 by taking out Andrew Hines in the final round with a run of 6.798 at 197.36 on her Ray Skillman/Big St. Charles Suzuki. It also marked Stoffer’s 10th career win, as she was able to hold off a hard-charging Hines at the finish line. Stoffer, who impressed on Saturday and qualified No. 2, beat Scott Bottorff, Joey Gladstone and her White Alligator Racing (WAR) teammate Jerry Savoie to advance to the final round, and finished the job at a track that holds a lot of memories for the veteran.

“Winning in Sonoma is definitely on my bucket list,” Stoffer said. “I kind of call it my home race because I raced Division 7 so long and I was a Division 7 champion. Coming here to Sonoma, it’s been phenomenal. This is definitely a moment I will always remember. This WAR team, they gave me a good bike and I said earlier we could go toe-to-toe with everyone. It was a really good race with Andrew, but our bike is phenomenal and it’s an honor to ride it.”

Hines, who went 6.800 at 200.98 against Stoffer, advanced to his 99th career final round and first in 2021 with victories against Ryan Oehler, points leader and defending world champ Matt Smith and Cory Reed. 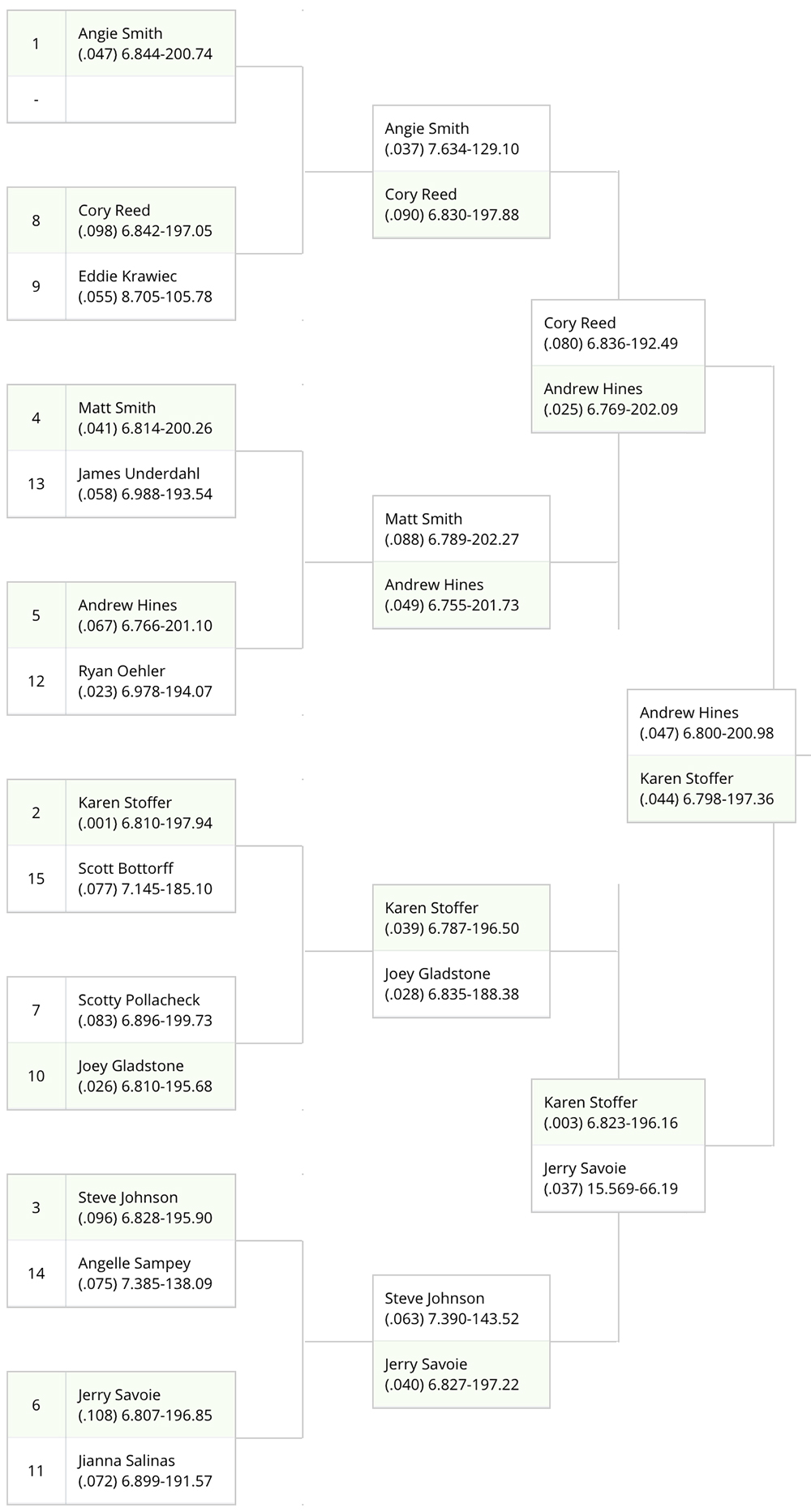 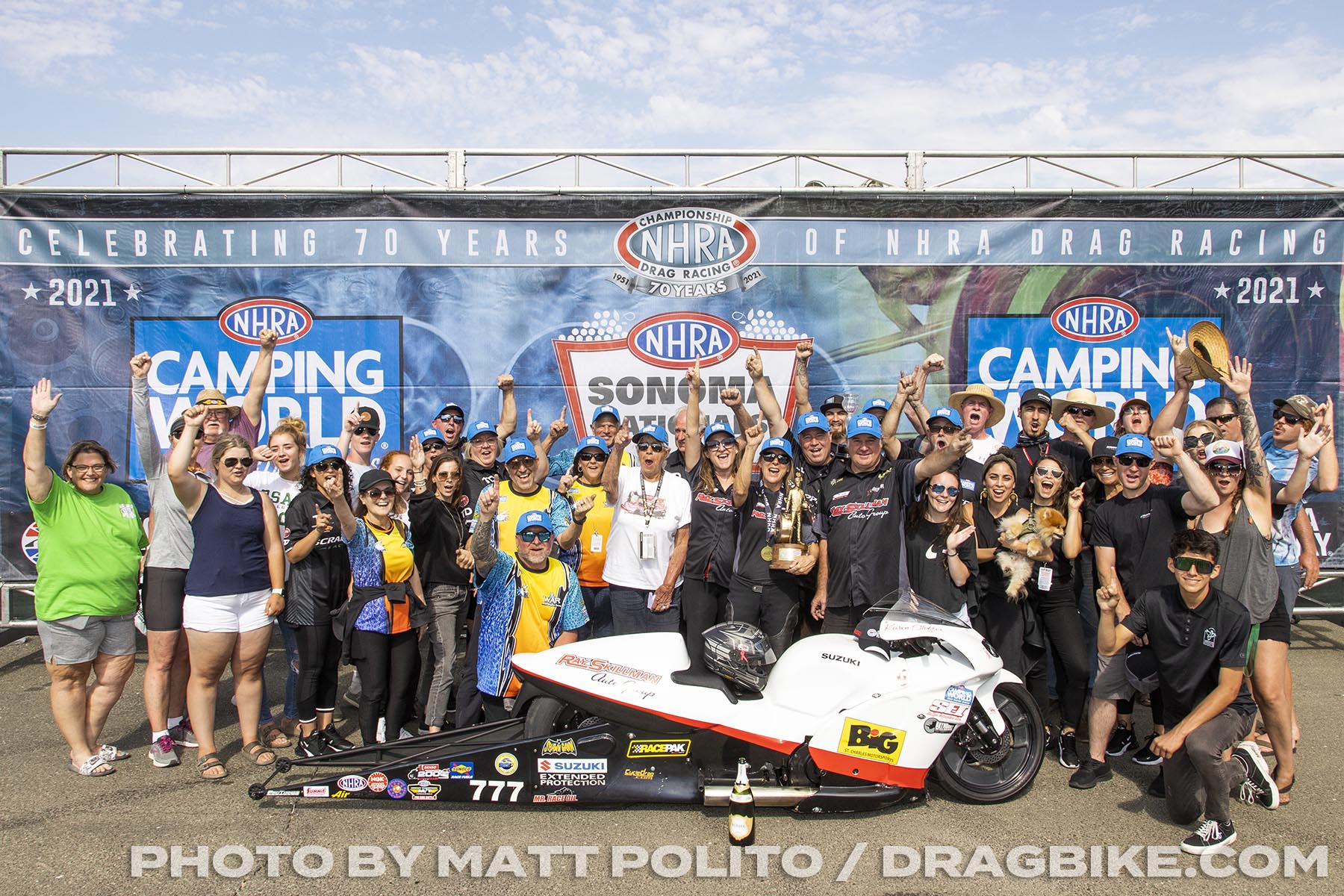 Angie Smith capped off a wild, record-setting day of qualifying in Pro Stock Motorcycle by earning her first career No. 1 qualifier with an impressive run of 6.736 at 203.06 on her Denso Auto Parts EBR. Smith’s run came during the final qualifying session after watching her husband, Matt, take the top spot and make the fastest run in class history with a pass of 205.04 earlier in the day. But A. Smith answered with her strong pass to close out the day, giving her plenty of momentum heading into eliminations.

“It is so tough out here and for me to be No. 1, I’m so proud of this Denso team,” Angie Smith said. “We did a motor swap in 30 minutes on my bike and I was pretty bummed after the last round. To go my career-best, to go 203 (mph), I couldn’t be more proud of this entire team. Everyone that helps us, I couldn’t be more proud to give them a yellow hat as the No. 1 qualifier and hopefully I can get a blue (winner’s hat) tomorrow.”

Karen Stoffer made a big jump in the final session as well, going all the way to second thanks to her 6.750 at 198.61. Steve Johnson is third after his pass of 6.751 at 199.94. Points leader Matt Smith, who won in Denver to open the Western Swing, got bumped to fourth in the final session.

Hines made a major move to open the weekend in Pro Stock Motorcycle, jumping to the top spot after his run of 6.761 at 201.67 on his Vance & Hines Buell. If it holds, Hines would qualify No. 1 for the first time this season and 45th time in his career. The 2019 race winner has a history of success at Sonoma Raceway and will be looking for his fourth win at the facility and first victory of the 2021 campaign. Points leader and defending world champ Matt Smith is right behind, going 6.769 and setting the track speed record with a blistering pass of 203.28. His wife, Angie, is third after she went 6.773 at 200.50.