Stoffer wrapped up one of the most impressive weekends in Pro Stock Motorcycle history, finishing her record-breaking weekend by going 6.700 at 200.77 on her Big St. Charles/Ray Skillman Suzuki to beat Angie Smith in the final round. It proved to be a thrilling way for the category to open its 2022 season and the weekend belonged to Stoffer, who claimed her 11th career victory.

To reach the final round for the fourth straight race, dating back to last season, Stoffer made the two quickest runs in Pro Stock Motorcycle history, going 6.682 at 198.70 in the opening round to initially set the record before she topped it with an astounding 6.665 at 200.71 a round later. Stoffer added a 6.721 at 200.08 to reach the final round, with her finals performance giving Stoffer the third-quickest run in class history.

“I knew the conditions were fantastic and out of the box, the bike was on fire,” said Stoffer, who now has three Gatornationals wins. “Gainesville is like my second home. I’ve spent a lot of time here; I feel really comfortable racing here and I’ve done well. When you look at that whole package, it means a lot and it’s definitely a dream come true to win and set a record at one of my favorite tracks. I love it here and it’s really nice to know we were able to cement something and say we were the first bike in the 6.60s.” 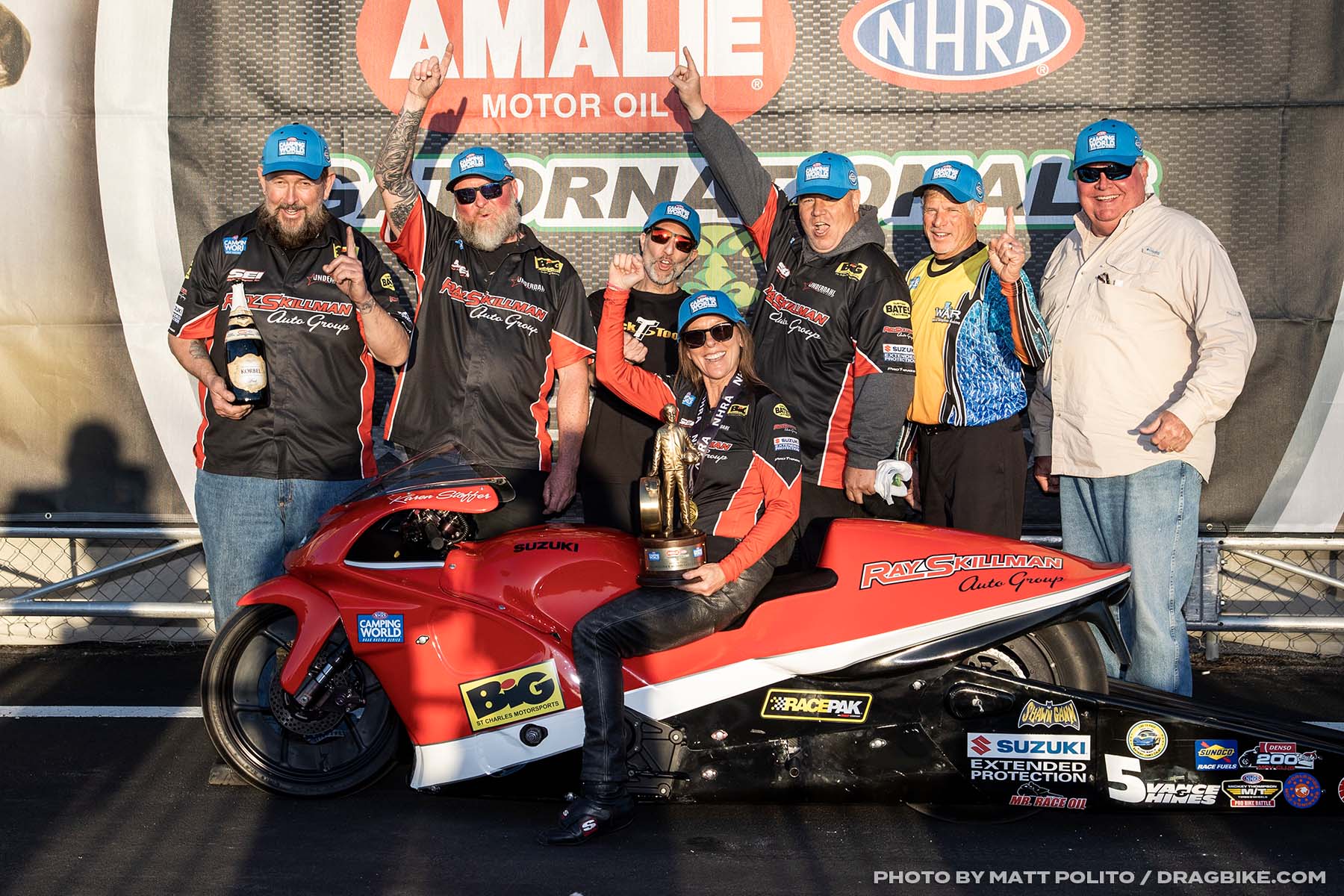 Smith had a strong weekend as well, advancing to her third career final round thanks to round wins against Chris Bostick, Steve Johnson, and Joey Gladstone. 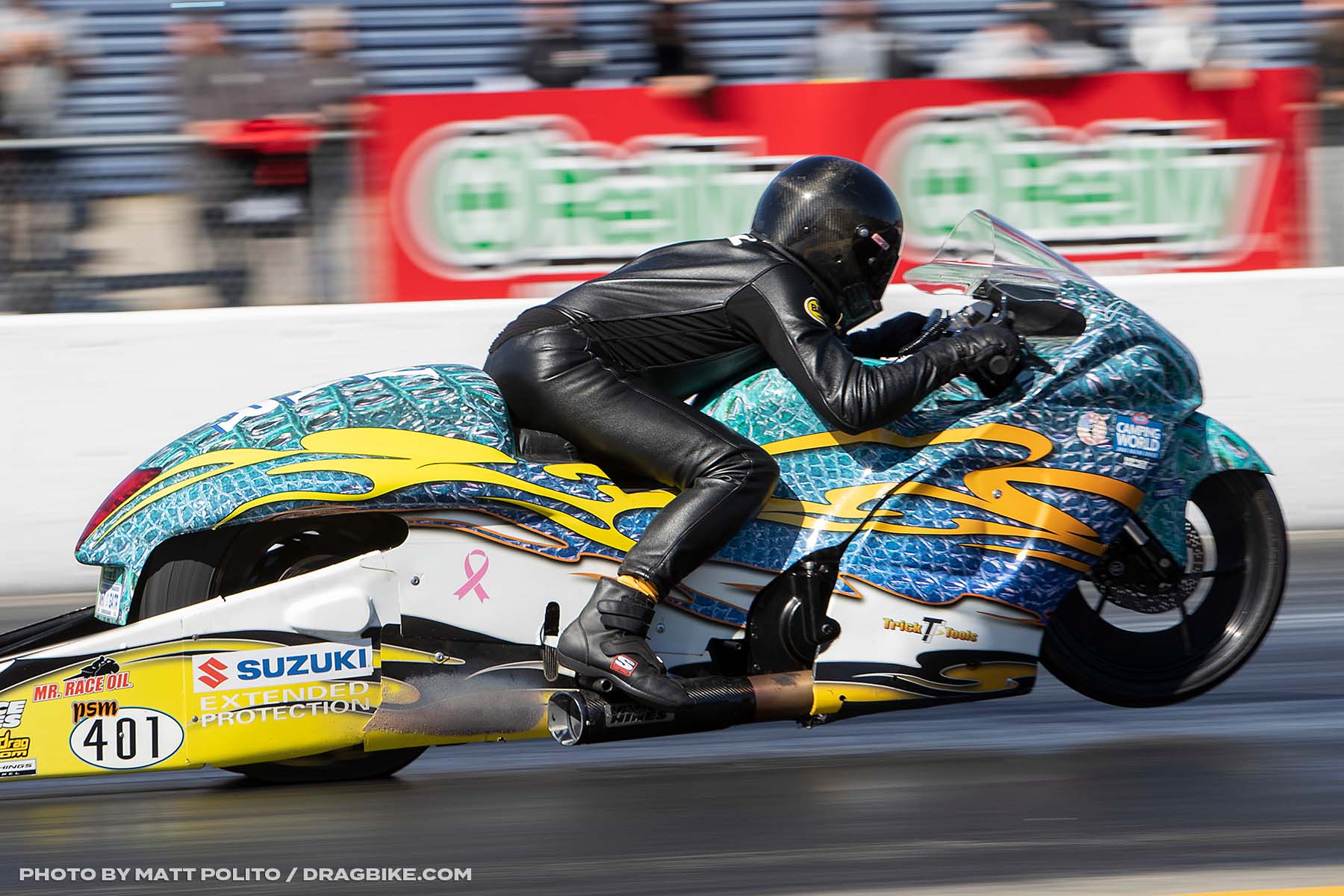 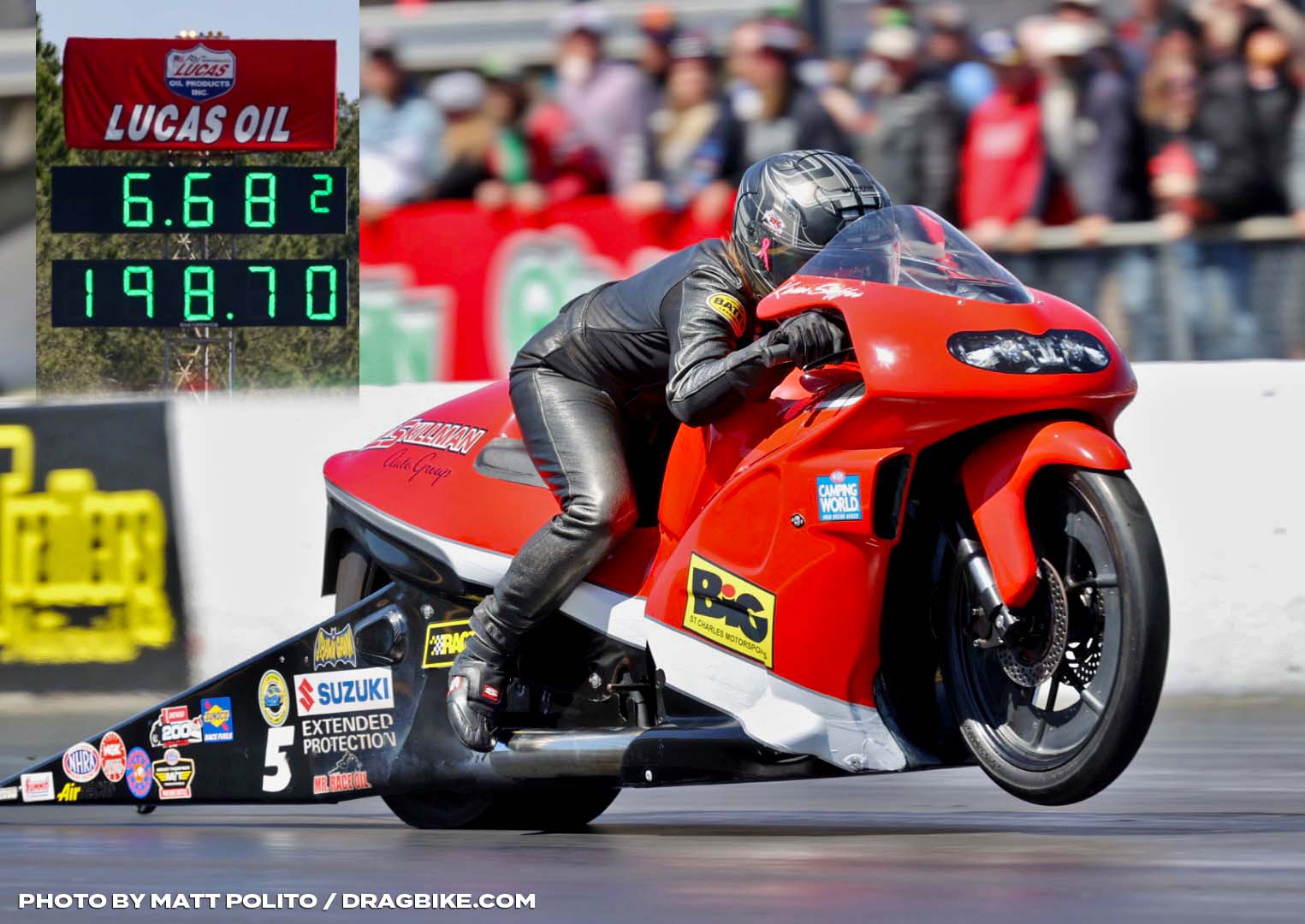 Phillips with a slight starting line advantage, but the bike boggs right at the hit. Krawiec is straight down the groove for the win. 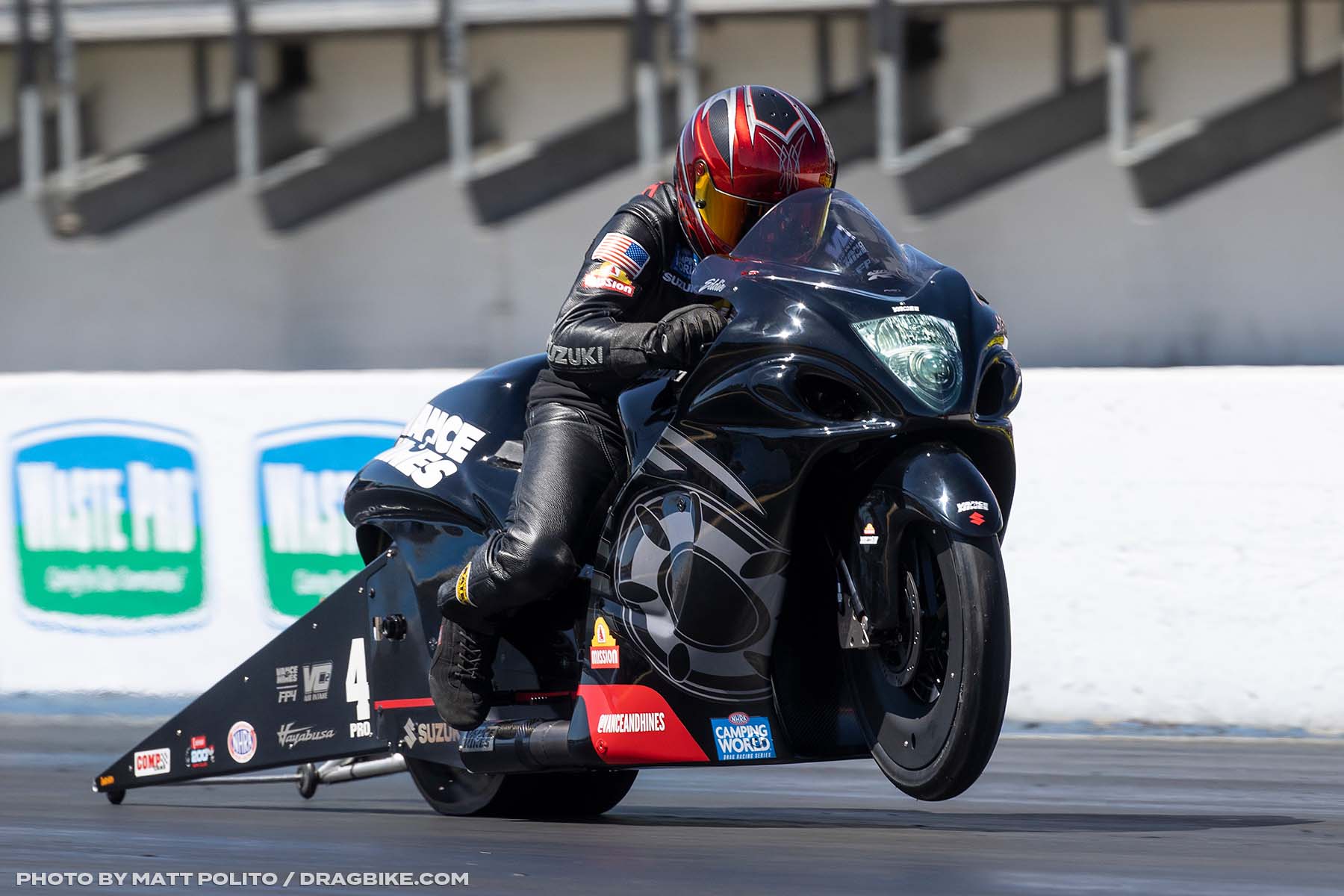 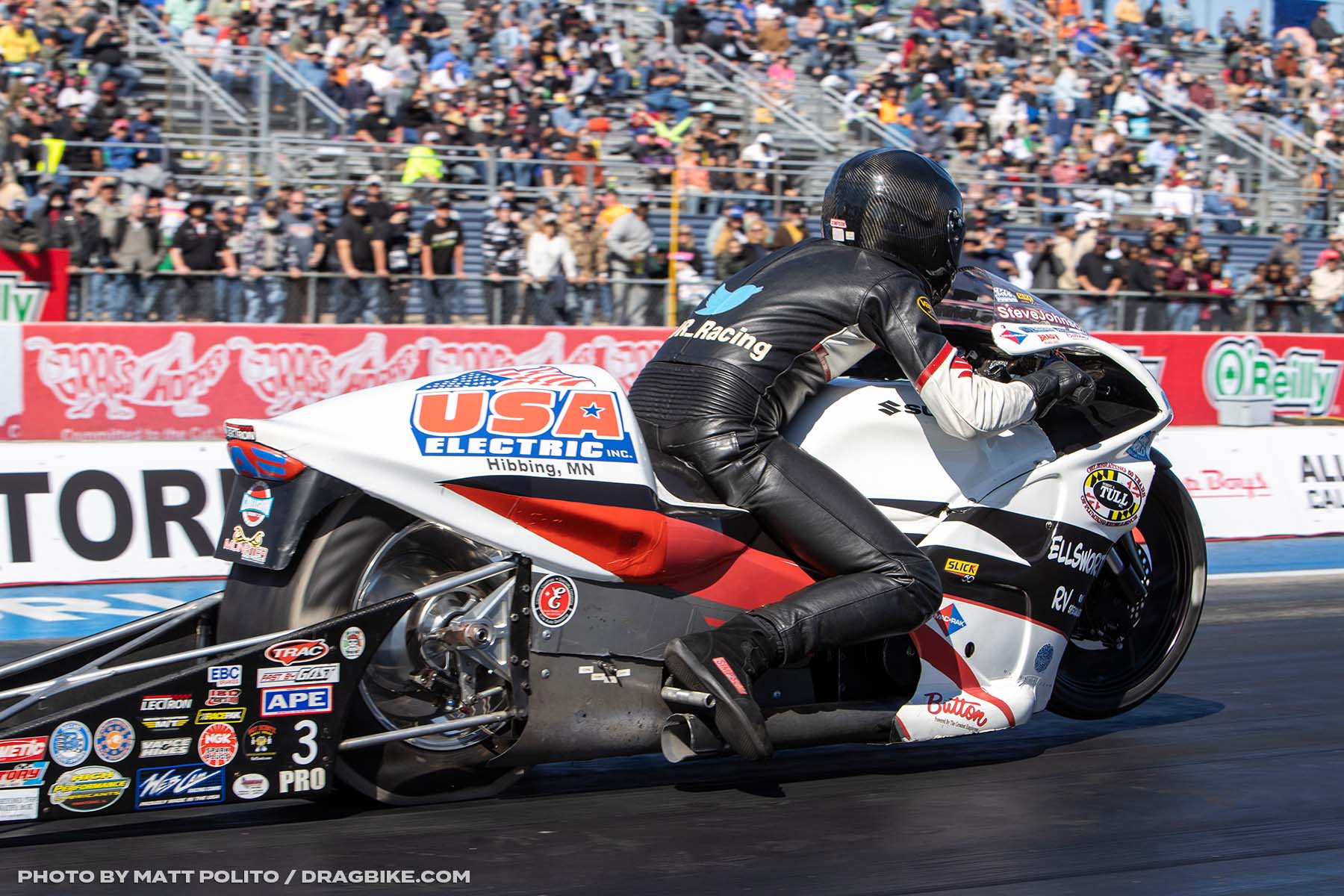 Smith with the starting line advantage, but spun the tire and was out of the groove early. He got really close to the wall before he clicked it off. Bonham gets his first career round win.

This is the first time Gladstone and Ingwersen have faced each other in eliminations. Gladstone with the starting line advantage and never trailed for the win. 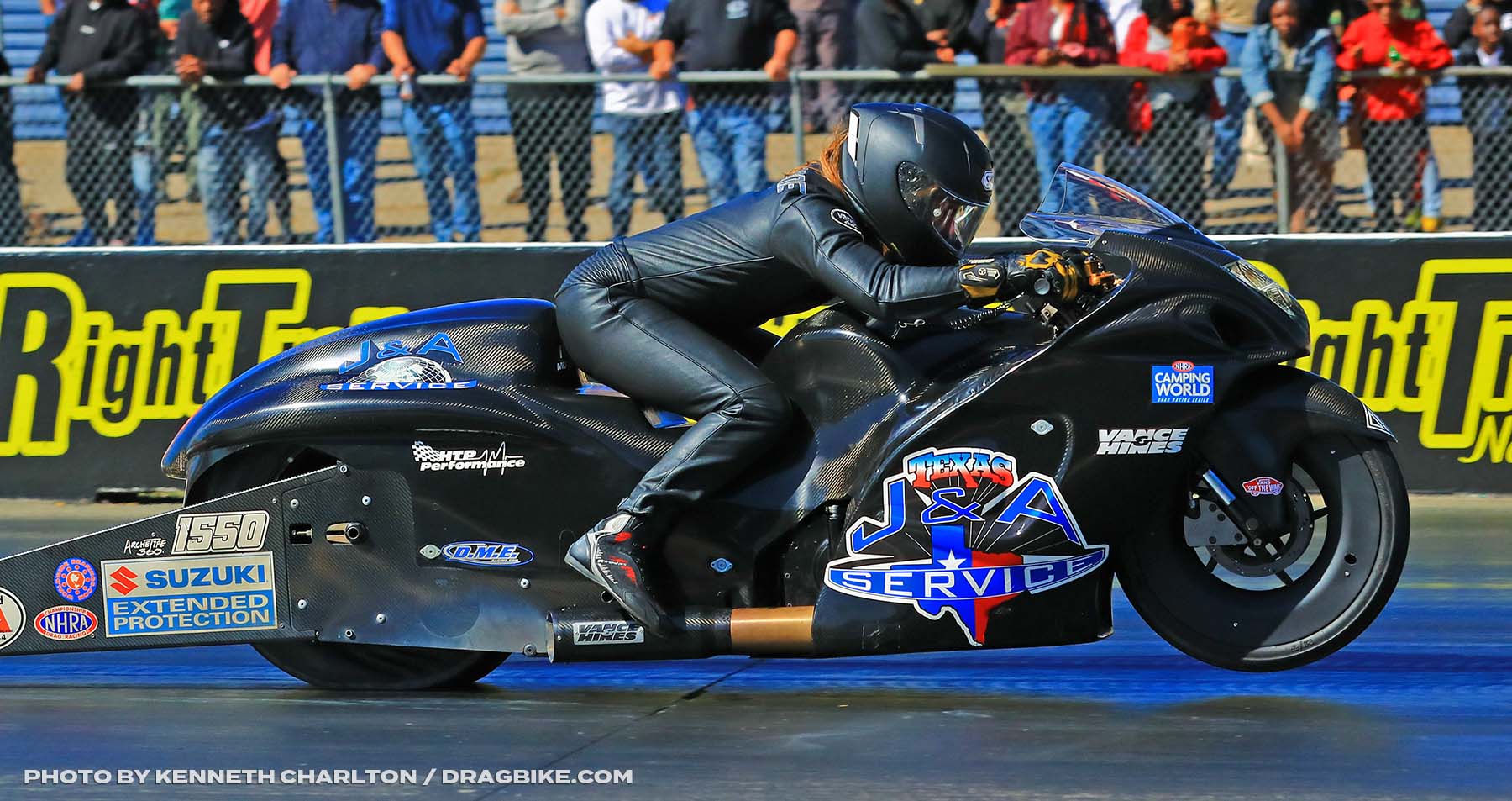 Johnson with the starting line advantage, but Smith had the lead by the time they went by the Christmas tree and she never trailed from there on for the win. She will have lane choice over Gladstone in the semifinal.

Bonham has the starting line advantage, Savoie has the difference made up by 150 feet and never trails from there on for the win. Savoie’s bike makes a move toward the centerline, it crosses after the finish line, but he still gets the win.

Krawiec with the starting line advantage, but Stoffer has the difference made up by the time they go by the Christmas tree. She runs the quickest pass in Pro Stock Motorcycle history for the win. 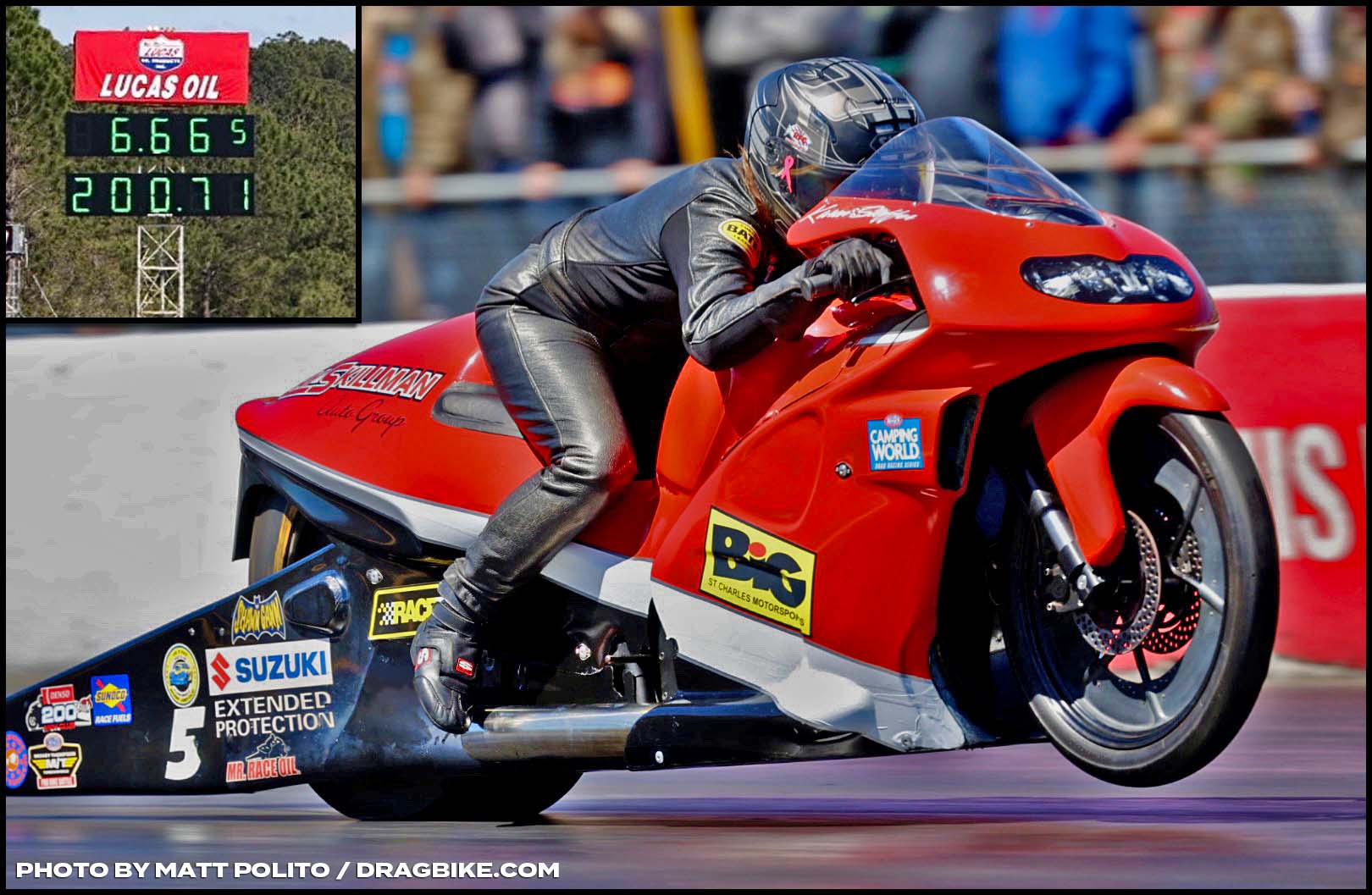 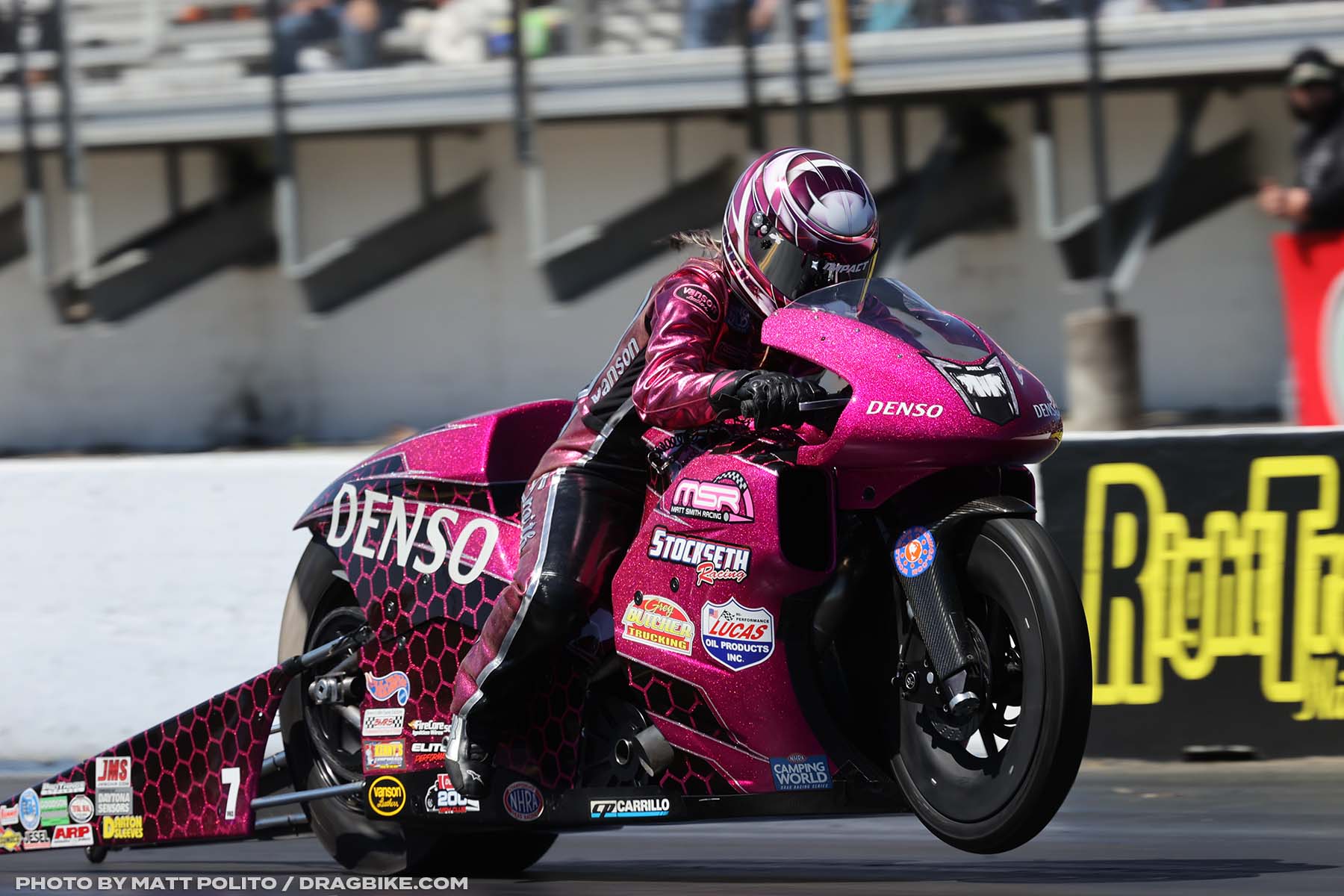 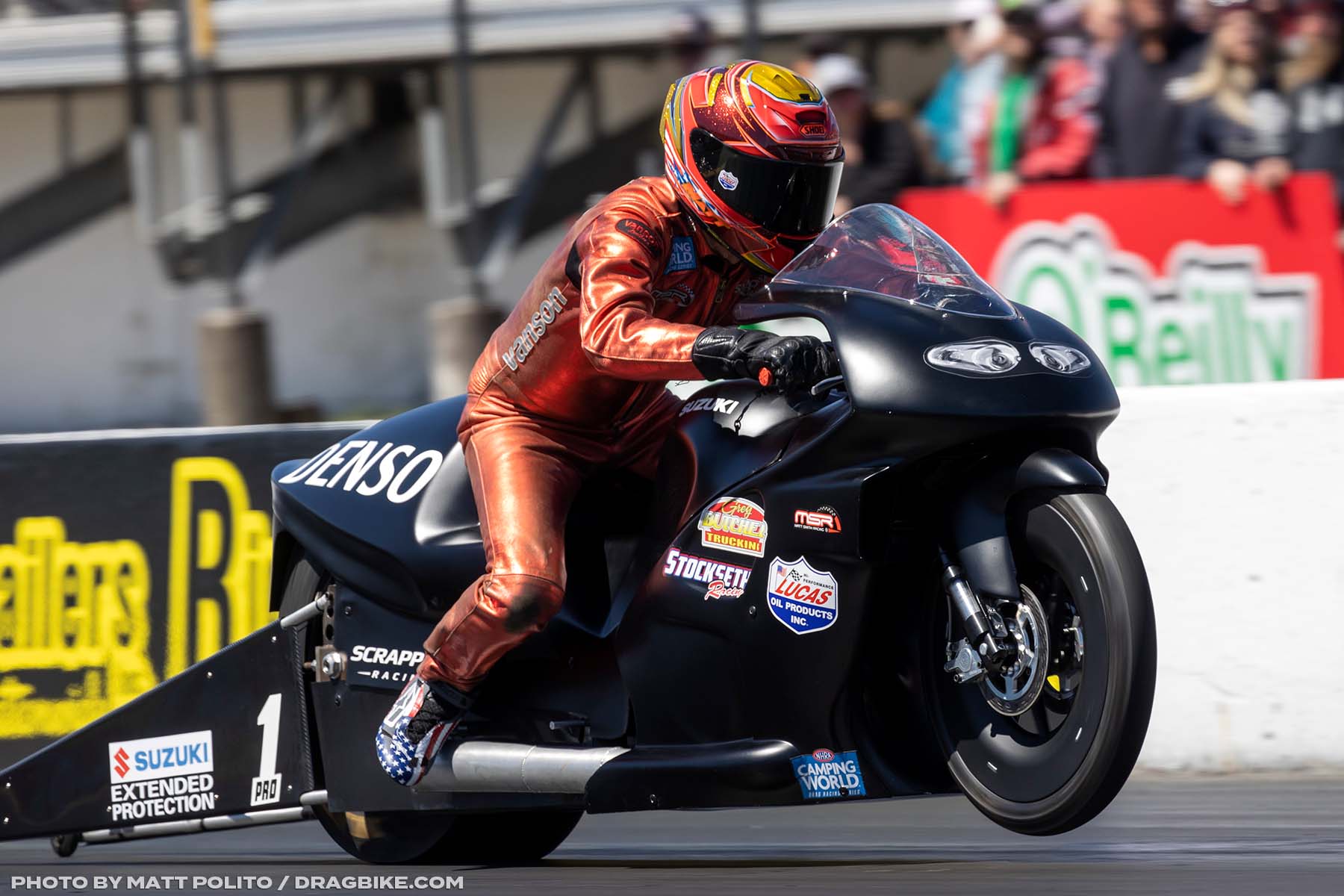 Pro Stock Motorcycle, which is making its 2022 season debut in Gainesville, could not complete qualifying due to weather on Saturday. Eliminations will be based on points from last season and Smith, who is the defending world champ and won in Gainesville in 2021, will start raceday from the No. 1 position. 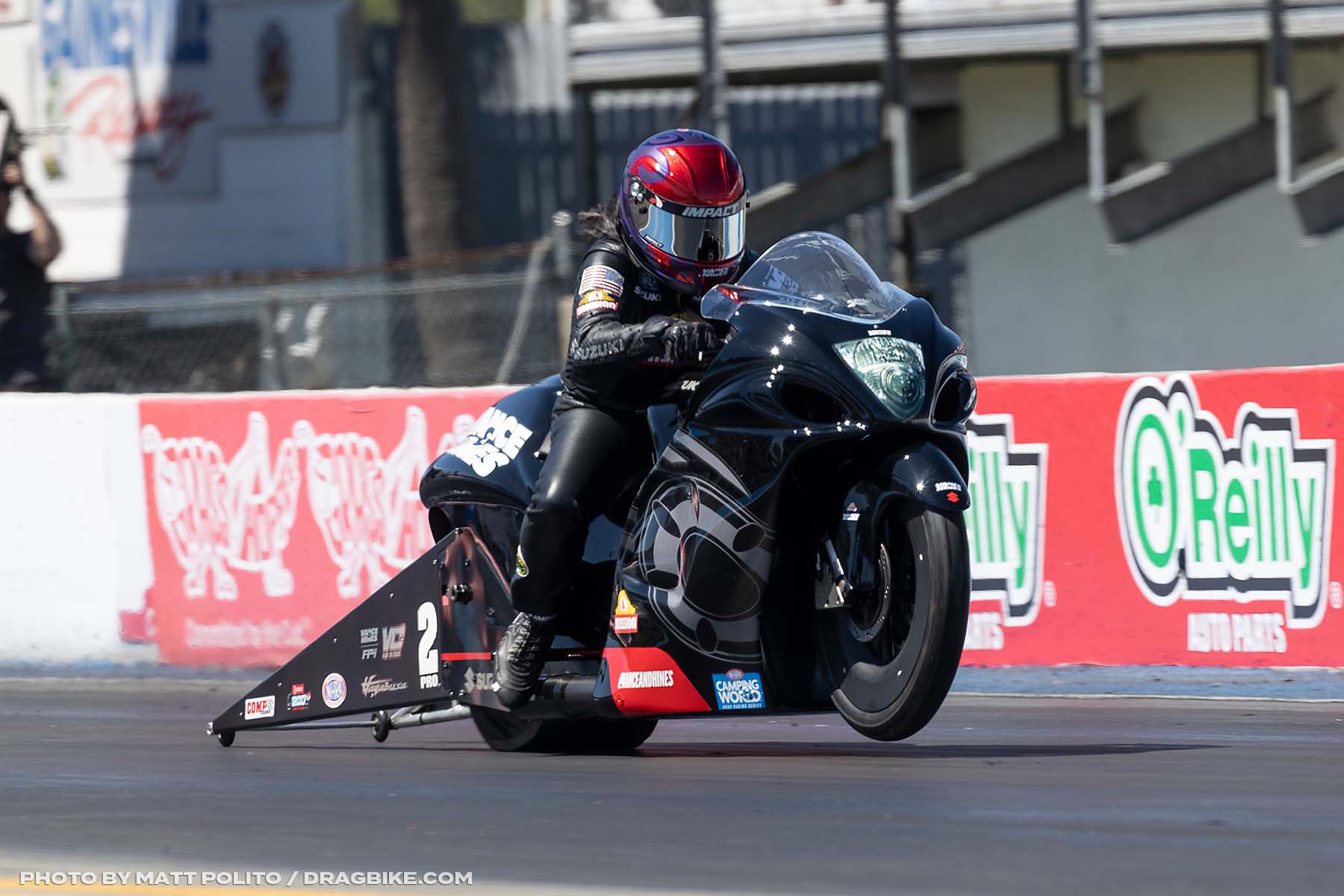