Defending Pro Stock Motorcycle world champ Matt Smith picked up his first playoff victory of 2019 thanks to his 6.855 at 195.90 in the final round on his Denso Auto Parts/Stockseth/MSR EBR. He outlasted Steve Johnson’s 6.863 at 194.04, picking up his second win this year and 24th in his career. He knocked off Katie Sullivan, Angie Smith and Andrew Hines to reach the final round. Smith, who won for the second time in Vegas, is fourth in points and trails Hines by 117 points.

“I can’t say enough about my guys and this team,” Smith said. “We took it into our own hands (against Andrew) and it’s not totally and mathematically over yet. I told everybody we were going to shoot for the moon in the finals, and it stuck. When it stuck, there’s nobody going to catch us when it runs like that. We just pulled it off in the final and did our job.”

Trying to play playoff spoiler, Johnson reached his second final round this year by beating Ron Tornow, Angelle Sampey and Scotty Pollacheck. Hines leads Jerry Savoie by 115 as he closes in on his sixth world title. 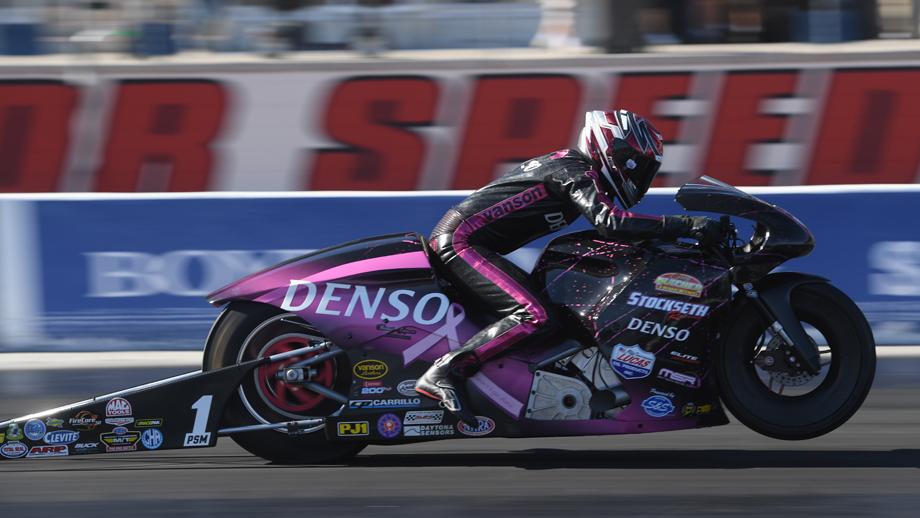 Matt Smith saved his best performance for the last run of the Dodge NHRA Nationals. That worked out just fine. Smith took down rival Steve Johnson to win for the second time in 2019 as he went wire-to-wire, combining pole position with a Wally.

Matt Smith saved his best performance for the last run of the Dodge NHRA Nationals. That worked out just fine. Smith took down rival Steve Johnson to win for the second time in 2019 as he went wire-to-wire, combining pole position with a Wally after running a 6.855-second pass at 195.90-mph to beat Johnson’s 6.863 at 194.04.

Smith took advantage of his sixth pole position of 2019 to reach his fourth final of the campaign. The rider of the Denso EBR took down Katie Sullivan, his wife and teammate Angie Smith and rival Andrew Hines while riding the most consistent bike he’s had this season. 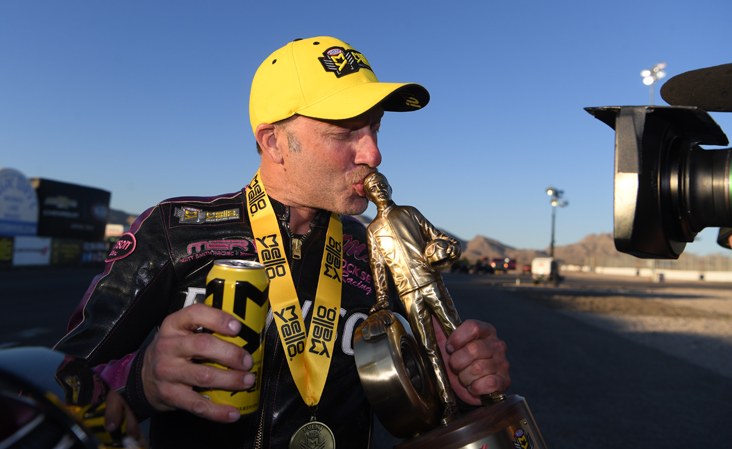 “It doesn’t matter who’s in the other lane,” said Smith, reference his and Johnson’s war of words from earlier in the season. “We’re just out here to win no matter what for our partners. (The championship chase) is not totally over yet. It’s not mathematically over but (Andrew Hines) has got a pretty big dagger in it and we’re gonna do our best to try to pair up against him in the first round and knock him out in Pomona.”

Johnson reached his second final of the season, both of which came in the NHRA Countdown to the Championship, from the No. 2 position. His performance surge has come after taking several races off during the middle of the season, which cost him a shot at making the playoffs.

That has not kept him from being a contender during the Countdown. Johnson defeated Ron Tornow, Angelle Sampey and Scotty Pollacheck en route to the final. He took advantage of a red-light by Sampey, but used terrific performance in the first three rounds to set up a matchup with Smith.

Andrew Hines will enter the final race of the season, the Auto Club NHRA Finals, with a 115-point lead over Jerry Savoie. There are 191 points on the table at the Pomona-based event and Savoie, Eddie Krawiec, Karen Stoffer and Matt Smith are all still in contention for the world championship. 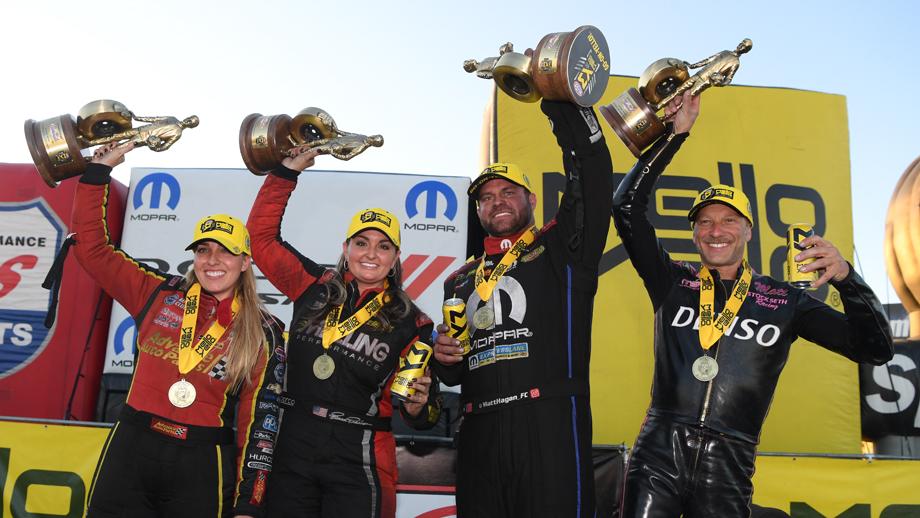 The Auto Club NHRA Finals are set to begin on Nov. 14. You can get your tickets here. Smith and Krawiec battled in the final round to decide the 2018 title, with Smith earning the 2018 title over 2017 world champion Krawiec.

Defending Pro Stock Motorcycle world champ Smith was even better Saturday, lowering the track record he set the previous day to a 6.840 at 196.93 on his Denso Auto Parts/Stockseth/MSR EBR. Smith grabbed the No. 1 spot for the sixth time this season 37th time in his career, and he will face Katie Sullivan in the first round of eliminations as the veteran seeks his first playoff win of 2019.

“We’ve got a lot of confidence going into tomorrow,” said Smith, who also qualified No. 1 at the Vegas spring race. “All in all, I’ve think we’ve got a pretty fast hotrod for tomorrow. This motorcycle is running pretty mean right now. After the helmet goes on, it’s all serious and it’s all business, and we’re having a good time.”