Savoie, the Pro Stock Motorcycle reigning world champion, defeated teammate LE Tonglet in the finals for his second win of the season and eighth of his career. Savoie’s 6.846 pass at 194.80 on his Suzuki bettered Tonglet’s 6.910 at 194.02 on his Suzuki.

“The season has been really good,” Savoie said. “I’ve had some misfortune a couple times and my riding hasn’t been like it should be. LE is solid as a rock so when you beat him it’s pretty rewarding. He’s taught me a lot and I’ve taught him some things and we thrive off each other. We bring out the best in each other and that’s what it takes to win races.” 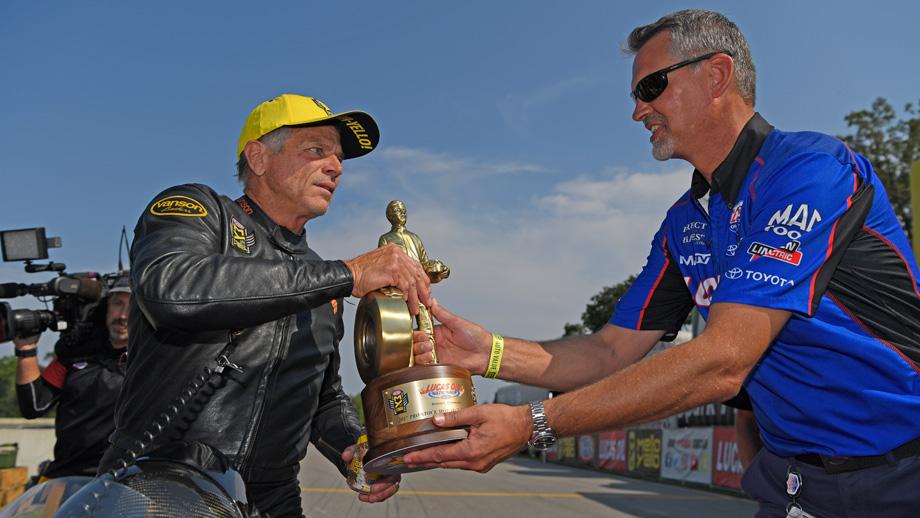 Savoie faced Mike Berry, Angie Smith and Matt Smith before lining up against Tonglet in his third finals appearance of the season. Tonglet, who has five victories this season, raced past 2016 Rookie of the Year Cory Reed and five-time world champ Andrew Hines before facing his teammate.

It was a good round for the Smith family. Matt Smith rocketed to a 6.859, low e.t. of the meet, to ride around Freddie Camarena’s holeshot and clinch his sport in the Countdown, and his wife, Angie Smith, 10th in points, has to also be feeling a little better after beating ninth-place Karen Stoffer and seeing No. 11 Steve Johnson foul after an apparent two-step malfunction. Points leader L.E. Tonglet also threw his hat into the performance ring with a stout 6.864, also quicker than the 6.879 pace set in qualifying by Hector Arana Jr. 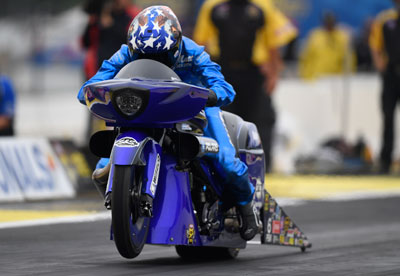 Reigning world champ Jerry Savoie reset low e.t. with a 6.845 to take down Angie Smith while teammate L.E. Tonglet also sizzled to a 6.850 in besting Cory Reed. Andrew Hines took down low qualifier Hector Arana Jr. in a 6.91 to 6.91 battle while Matt Smith took out Hines’ teammate, Eddie Krawiec, with a strong 6.88. 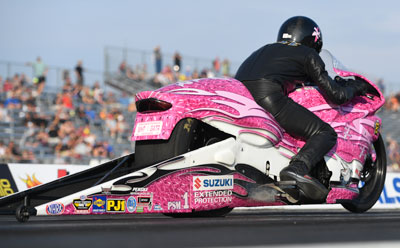 With a final foursome composed exclusively of the current and three former world champs, no quarter was expected and none given. Points leader and 2010 champ L.E. Tonglet ran 6.896 to beat three-time titlist Andrew Hines while his teammate, reigning champ Jerry Savoie, got an easy one with a matching 6.869 after two-time Matt Smith’s bike faltered early. Savoie will earn lane choice based on his slight better speed, 194.66 to 194.63. 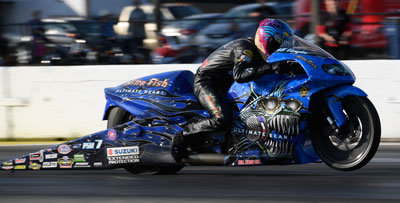 Reigning season champ Jerry Savoie, far lane, scored his second win of the season and the eighth of his career when he defeated his teammate, L.E. Tonglet, in the final round, 6.84 to 6.91.