Eddie Krawiec rode his Screamin’ Eagle Vance & Hines Harley-Davidson to a 6.818 at 193.88 to outlast rookie Cory Reed’s 6.958 at 186.43 on his Precision Service Equipment / Star Racing Buell in the final round. This is Krawiec’s 35th career victory, fourth of 2016 and fourth at Maple Grove Raceway. The three-time world champion started the weekend fifth in points and moved up to second behind teammate Andrew Hines. Krawiec rode past Englishtown, N.J., winner Angelle Sampey, Karen Stoffer and Sonoma, Calif., winner LE Tonglet to make it to the final round. 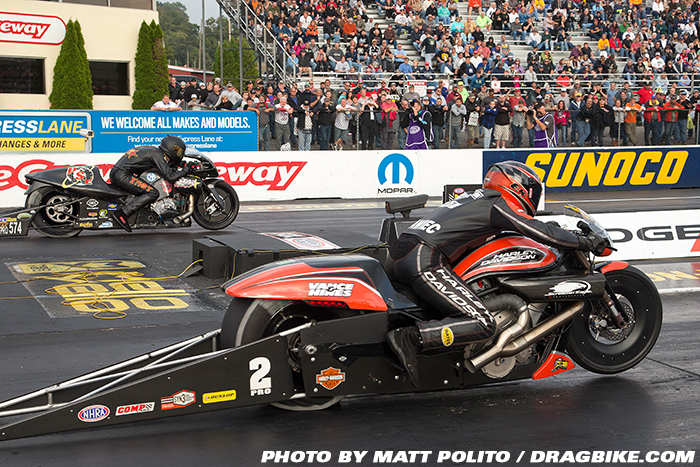 “My main goal this weekend here was to come win,” Krawiec said. “If you win races in the Countdown, you’re going to be fighting for the championship when you get to Pomona. This was a big day for all of our team actually, Andrew and myself getting past the first round. When you draw Angelle and Chip Ellis in round one, you don’t say, ‘Well, this should be easy. This should be no problem this weekend.’ For me, I was on a mission first round because I knew if I went past first round I could keep the momentum and keep it rolling.”

Sampey is third in points and followed by Chip Ellis and alligator farmer Jerry Savoie in fourth and fifth, respectively. 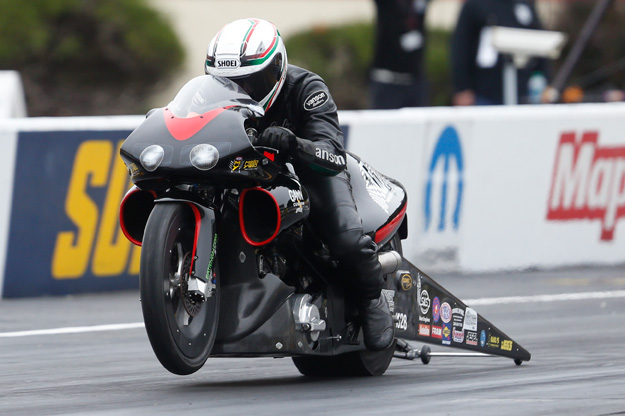 (W) Cory Reed (Precision Service Equipment Buell) 0.063 6.866 192.60
(L) Melissa Surber (Kosman Specialties Buell) 0.050 6.950 189.66
This is Melissa Surber’s ninth career start. Today’s number four is her highest qualifying position so far. This is the first time Surber and Reed have faced each other in eliminations. Reed was second coming off the starting line but caught up to Surber at 60 feet. After that, he pulled away to take the win and earn lane choice over Arana in the next round. 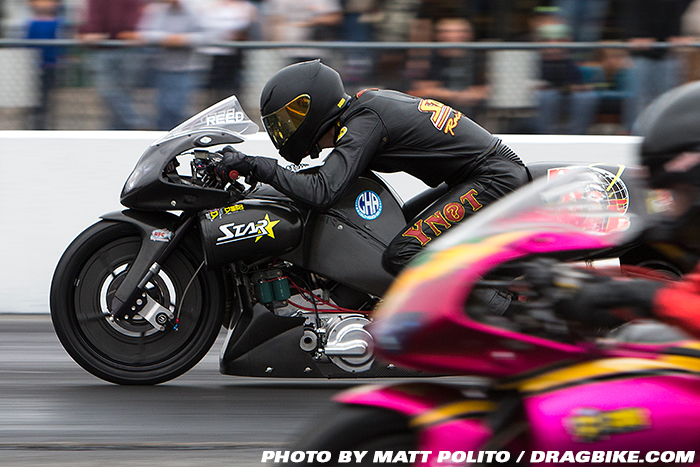 (W) Eddie Krawiec (Screamin’ Eagle/Vance & Hines) 0.002 6.760 196.19
(L) Angelle Sampey (Precision Service Equipment 0.101 6.863 193.18
Angelle Sampey won her first race here in 1996. She won this event five more times and has more wins at Maple Grove than any other motorcycle racer. She is starting this race from the number 15 spot in the order, after only one qualifying session. Riders who started in the 15th spot have only two wins in the 22 years that Pro Stock Motorcycle has been contested here. Eddie Krawiec has won this race three times and is number five in the points standings. Sampey is number two in the standings. Sampey is 5 – 2 against Krawiec in prior events. This time, Krawiec was quicker at the starting line and quicker on the track to take the win. Krawiec will have lane choice over Stoffer in round two. 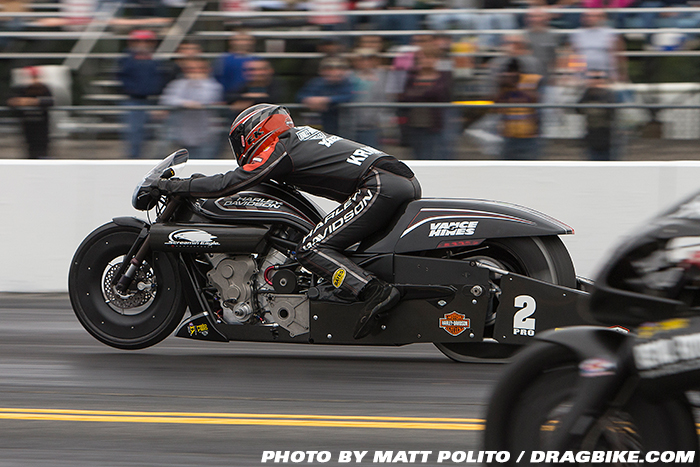 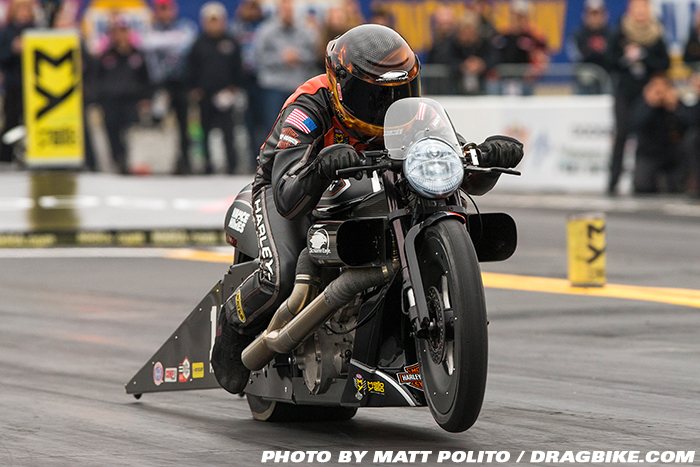 (W) Andrew Hines (Screamin’ Eagle/Vance & Hines) 0.004 6.772 196.87
(L) Chip Ellis (PiranaZ Buell) 0.067 NT-Broke After Staging
Andrew Hines is the defending event champion and has won here a total of two times. This is only the third time in his career that Ellis has started from the number 16 spot in the qualifying order. No rider has ever won the first round here when he or she has started in the 16th spot. Coming into this race, Hines was number one in the points standings and Ellis was number three. Ellis’ motorcycle launched and shut off as soon as he let the clutch out. It did the same thing yesterday in the only qualifying session. Hines will have lane choice over Savoie in the next round. 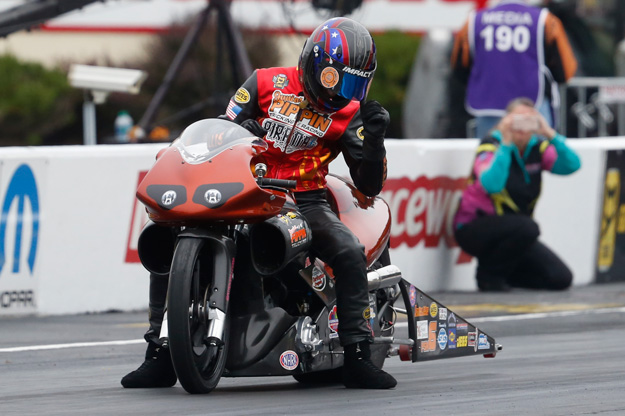 Results for Elimination Round 2 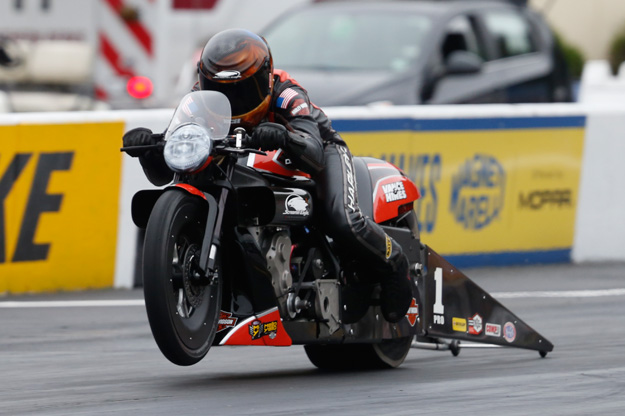 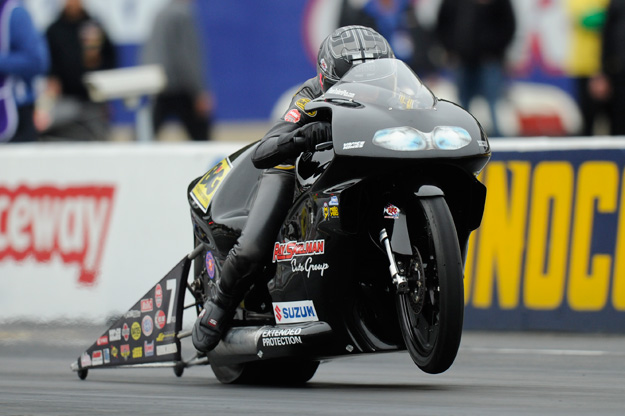 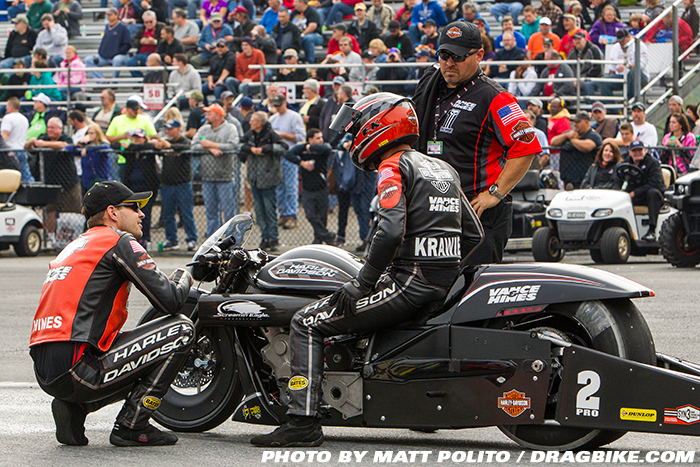 (W) Eddie Krawiec (Screamin’ Eagle/Vance & Hine 0.026 6.818 193.88
(L) Cory Reed (Precision Service Equipment Buel 0.015 6.958 186.43
This was Reed’s first final round in his career, and Krawiec’s sixth final round this season. Reed was a little bit quicker coming off the starting line but Krawiec got by him right away and pulled away to take his fourth national event win this season and the 35th win of his career. 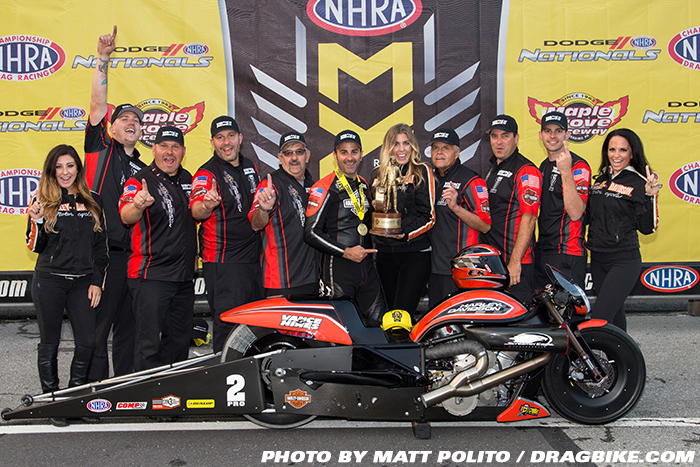 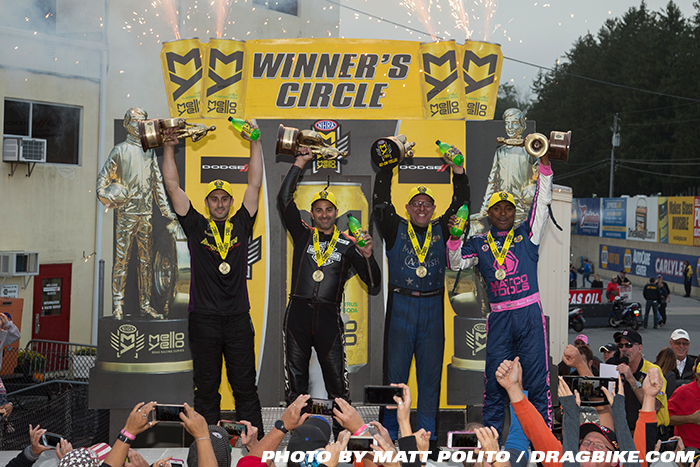 Five-time and reigning world champion Andrew Hines rode his Screamin’ Eagle Vance & Hines Harley-Davidson to a 6.784 at 196.22 to secure the 38th No. 1 qualifier of his career and second of the year. The five-time 2016 event winner and points leader is paired with Charlotte-winner Chip Ellis, who entered the event 17 points behind Hines.

“This could be huge in the long run,” said Hines, a two-time Reading winner. “Championships have come down to just a couple of little points here in the last few years, going back the last seven or eight years since the little points were implemented. I’m going to take it right now and run with it. It was nice to bring my Harley here and make a nice, clean, straight run. It obviously puts up a big run when it goes down the track straight.”

Hines’ Harley-Davidson teammate Eddie Krawiec is second with a 6.811 at 191.29. Krawiec, a three-time winner at Maple Grove, has three wins this year in five final round appearances. He will open eliminations against Angelle Sampey, who leads the category with six career wins at the Dodge NHRA Nationals. Sampey is currently second in points behind Hines. 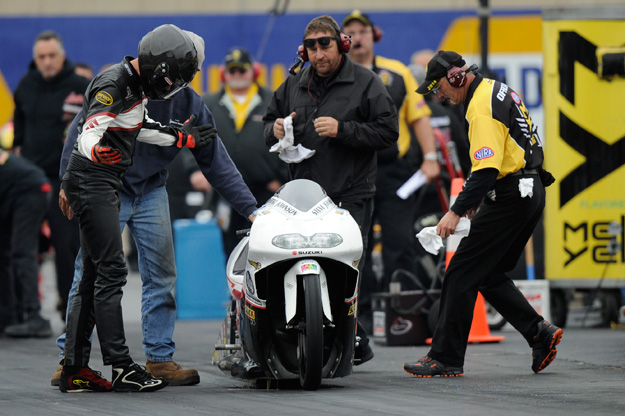 NHRA officials cancelled the first two rounds of qualifying at the 32nd annual Dodge NHRA Nationals at Maple Grove Raceway on Friday, Sept. 30, after rain and persistent mist. The Dodge NHRA Nationals is the third race of the NHRA Mello Yello Countdown to the Championship, NHRA’s six-race playoffs that will decide the 2016 world champions.

Officials consistently worked throughout the day to dry the track but as the temperature dropped and misting continued, racing for the day was called at 4:25 p.m. NHRA Mello Yello Series qualifying is set to begin as scheduled on Saturday, Oct. 1, at 11:15 a.m. 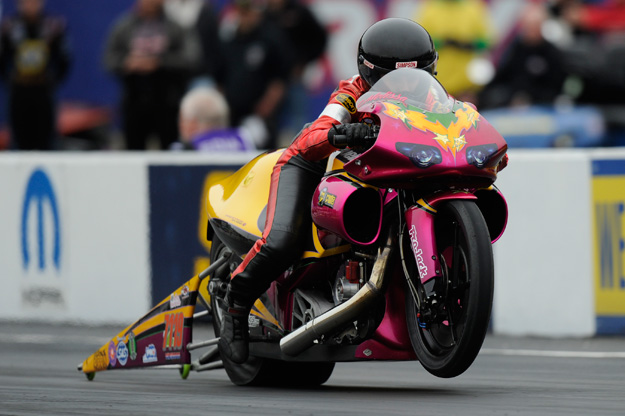