Tonglet finished atop the Pro Stock Motorcycle field with a 6.783 pass at 197.02 on his Nitro Fish Racing Suzuki to narrowly defeat Matt Smith in the final round. After securing his first Mickey Thompson Tires Pro Bike Battle title on Saturday, he notched his fifth national event victory of the season and 15th of his career. 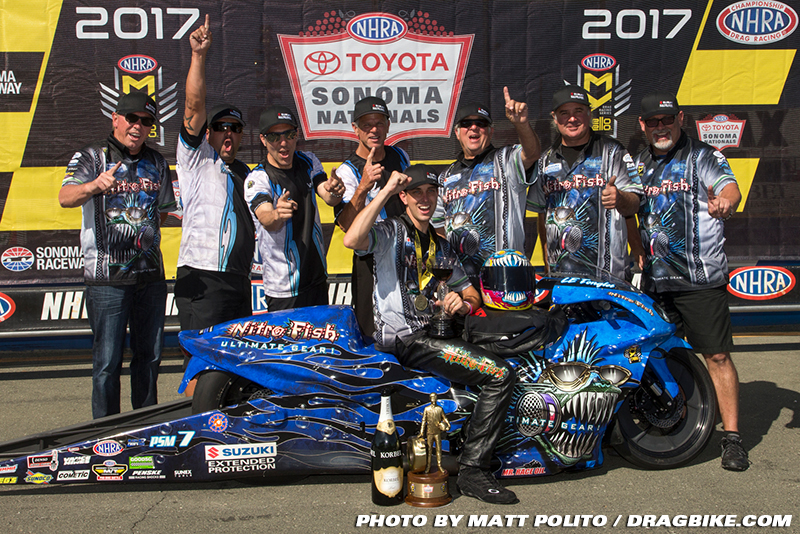 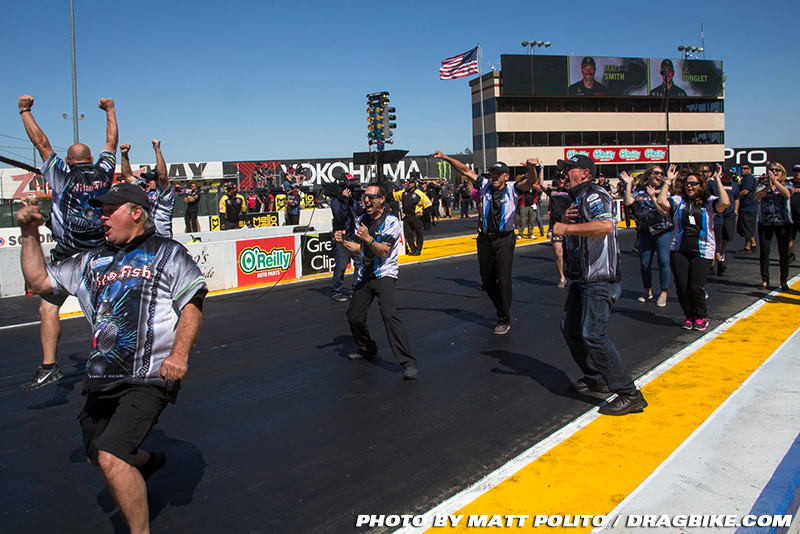 “It’s a big benefit to win the Battle the day before, which builds your confidence going into Sunday,” Tonglet said. “I could hear him [Smith] the whole way and knew it was close. I wanted to look over very badly, but I just stayed tucked in and just stared at the win light, and it lit, which was exciting.” 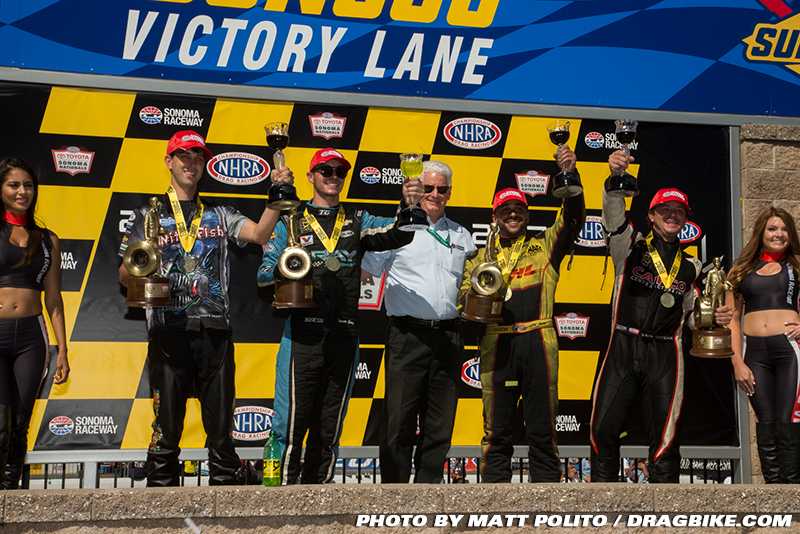 Tonglet remains the points leader, while Krawiec continues to hold on to the second position. 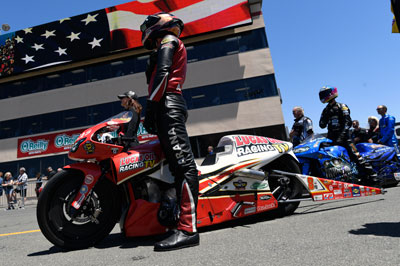 The two-wheel contingent put on a wild performance display, led by Matt Smith’s speed of 199.88 mph in his 6.800 to 6.935 conquest of Steve Johnson, which tied the fastest run of all time in Pro Stock Motorcycle. Another eye-opener was Andrew Hines, whose Harley Street Rod, after qualifying with a 6.844, picked up a bunch with a 6.775, 199.20 mph conquest of Scotty Pollacheck’s 6.796. Hector Arana Jr. defeated Cory Reed with a new low e.t. of the meet 6.749 at 199.52 mph, which is  the sixth-fastest Pro Stock Motorcycle run ever. 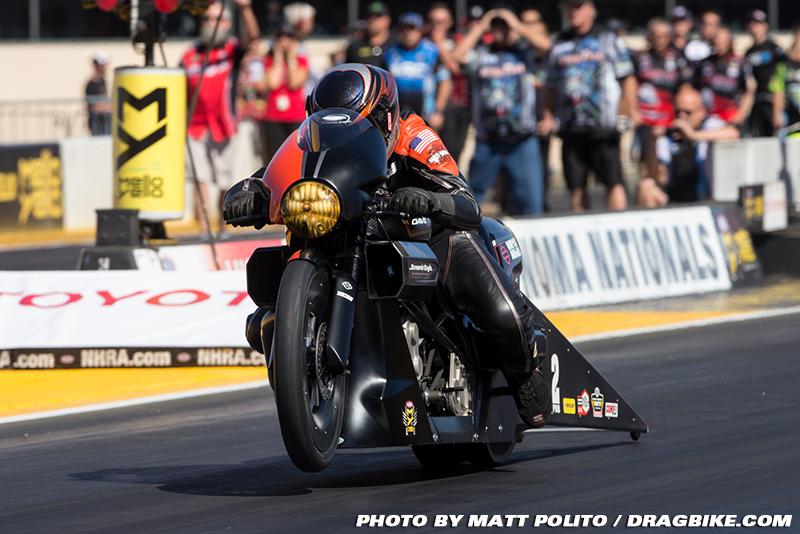 The red-hot LE Tonglet who has dominated the action so far in the 2017 season was nearly upset in the second stanza when Angie Smith, who has been enjoying a great weekend, jumped out to a .036 to .097 starting line advantage. Tonglet was barely able to run down Smith’s 6.848 with a 6.780 for a razor thin margin of victory of just .007-second. In the other rounds, Matt Smith, Hector Arana Jr. and Jerry Savoie also advanced. 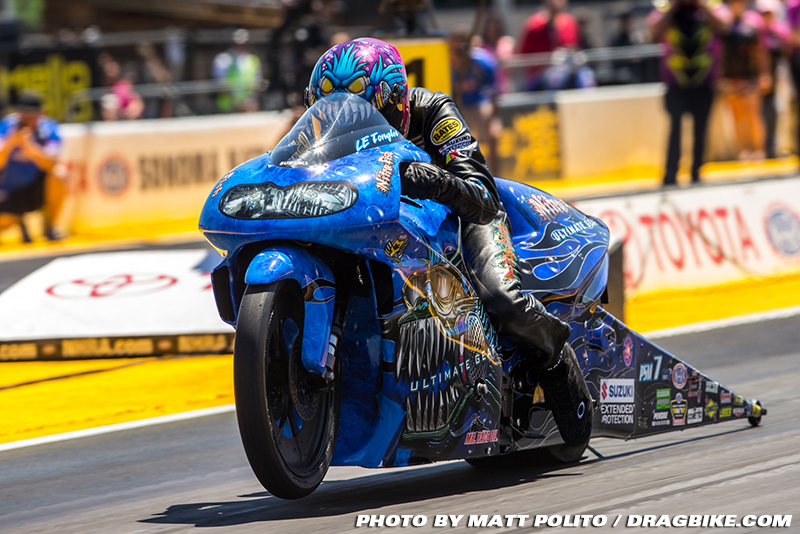 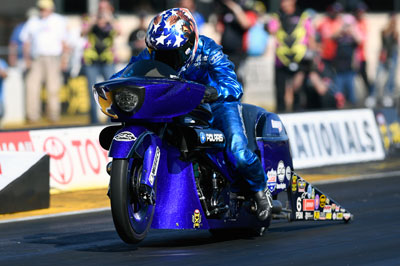 Defending event champion LE Tonglet has an opportunity to produce the fifth win in his already spectacular 2017 campaign as he is matched up to run Matt Smith in the final. Tonglet advanced to the money round by leaving on Hector Arana Jr., .030 to .068 and then holding on for a 6.796 to 6.800 decision. Smith was out first by a .011 to .061 huge margin in his contest against Jerry Savoie and was able to parlay the early leave into a 6.819 to 6.817 hole shot win. Tonglet will have lane choice. 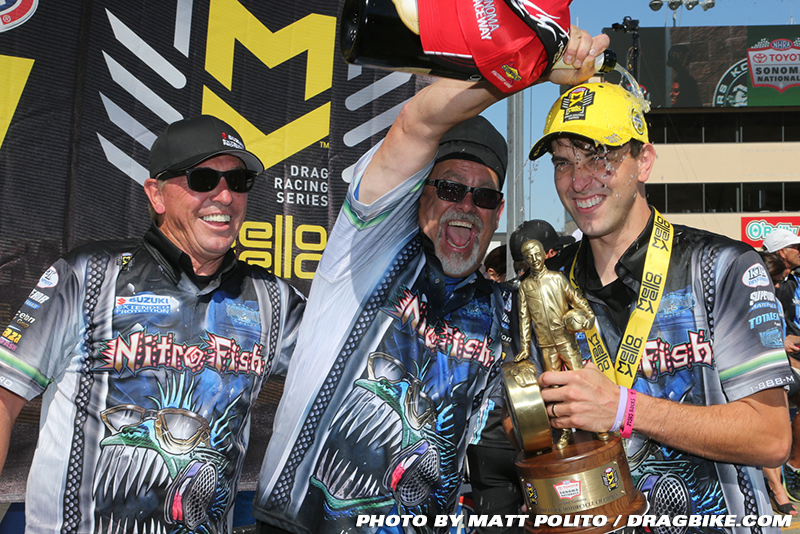 LE Tonglet scored his fifth victory of 2017 in dramatic fashion by winning one of the closest races in recent history with a margin of victory of just .0002 second over Matt Smith. The race began with Smith leaving first, .032 to .044, and it appeared that he was going to hold off Tonglet. But Smith’s bike began to veer out of the groove and Smith had to lean over to make the necessary correction, which dragged his speed down to 196.67 mph, his slowest of the weekend, and that may have cost him as Tonglet took the win stripe with a 6.783 to a 6.790. The win came within 24 hours after he won the Mickey Thompson Tires Pro Bike Battle on Saturday and it was his Tonglet’s 15th victory in 19 final round appearances, one of the best records in that category for any Pro driver. Tonglet was also the defending champion from last year’s Sonoma event. 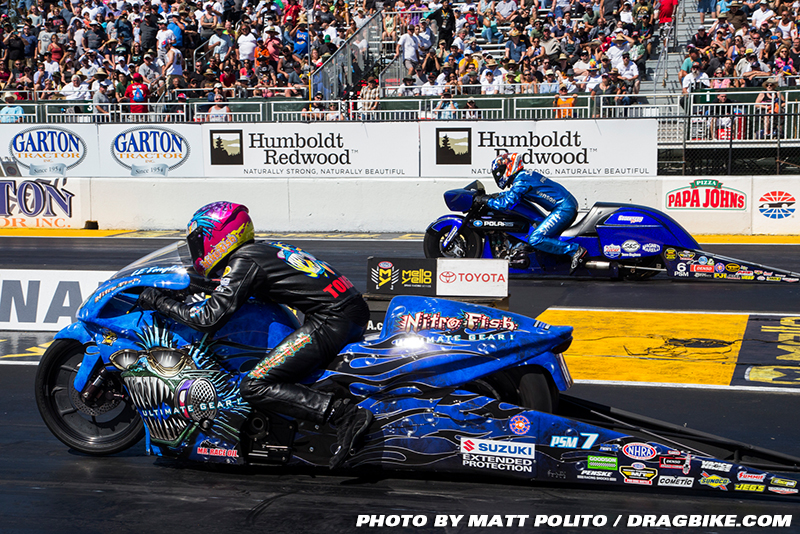 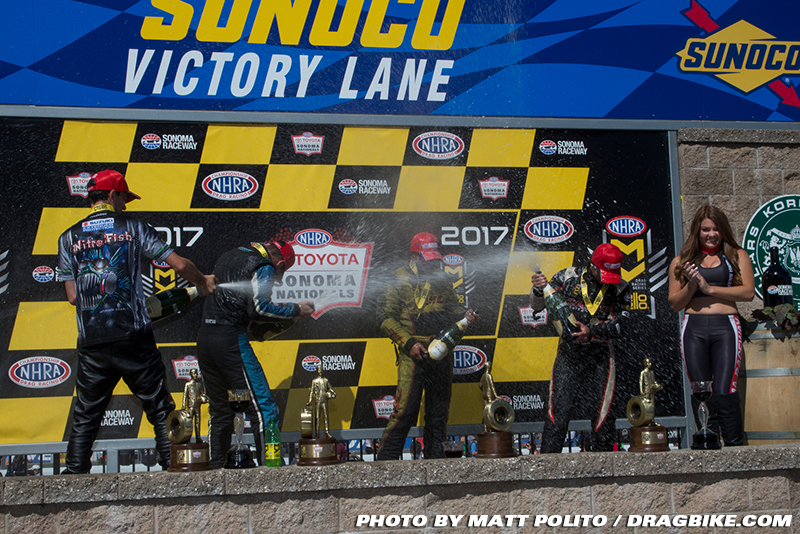 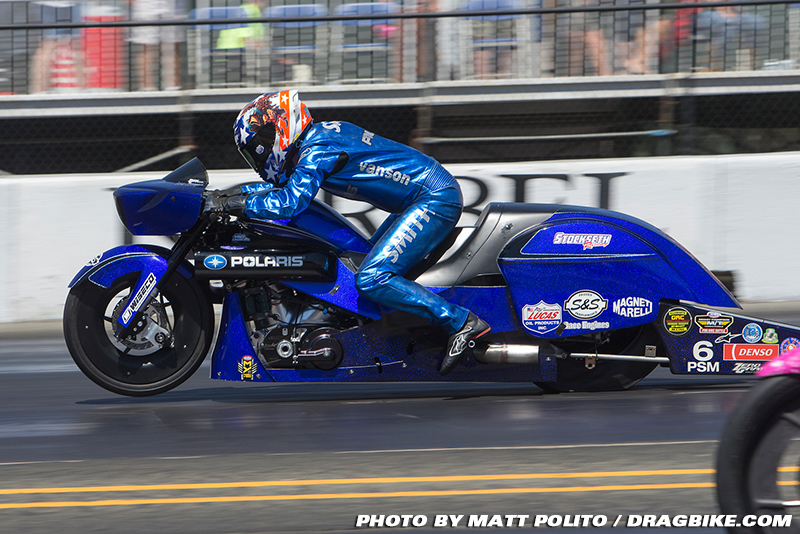 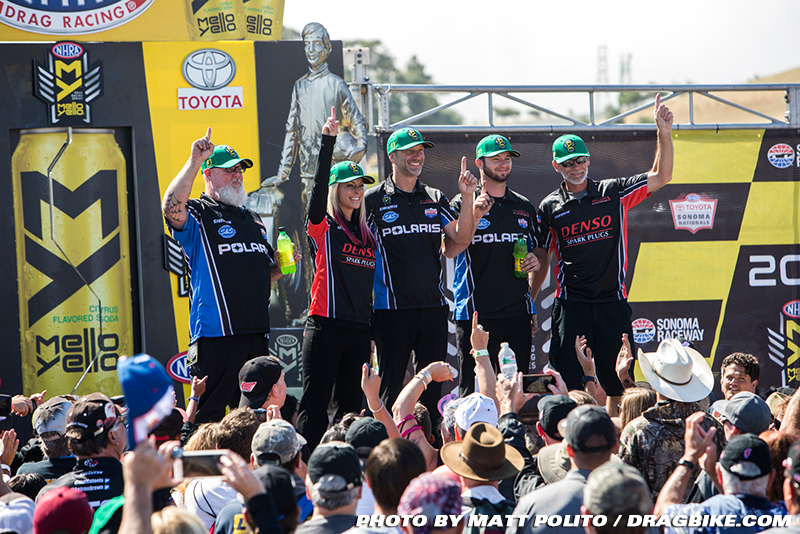