It had been nearly six grueling years since Steve Johnson had last won a race in Pro Stock Motorcycle. But the list of trials and tribulations, near misses and bumps in the road simply made what happened at the Amalie Motor Oil NHRA Gatornationals that much sweeter for the longtime two-wheel competitor.

With the Pro Stock Motorcycle riders kicking off their 2014 NHRA Mello Yello Drag Racing Series season at the historic event in Florida in mid-March, Johnson rose to the occasion and earned his first victory since 2008, knocking off Scotty Pollacheck in a final round that conjured up a number of emotions.

As the points leader, Johnson and his Steve Johnson Racing Suzuki team now hope to ride that massive wave of momentum into the NHRA Four-Wide Nationals, which takes place April 11-13 at state-of-the-art zMAX Dragway and marks the second of 16 bike events during the 2014 season.

“We’ve won six times in what is now our 28th year, and all those times we’ve won have all been special races and I’m crazy proud of it,” Johnson said. “But so much about it is perseverance. When you fight for it and keep fighting and then get it, it’s really powerful. The team is excited and when you win races, your entire team gets that energy. That energy isn’t always from the bike. It comes from people, good plans and lots of work, and it gives us the power to go forward with the same enthusiasm that we left Gainesville with.”

In one of the most unique and thrilling races in motorsports – the NHRA Four-Wide Nationals – the world’s top racers will compete at zMAX Dragway, home to the only four-lane, all-concrete dragstrip. Spencer Massey (Top Fuel), Matt Hagan (Funny Car), Mike Edwards (Pro Stock) and Hector Arana Jr. (Pro Stock Motorcycle) were last year’s winners. The race will once again be televised on ESPN2. 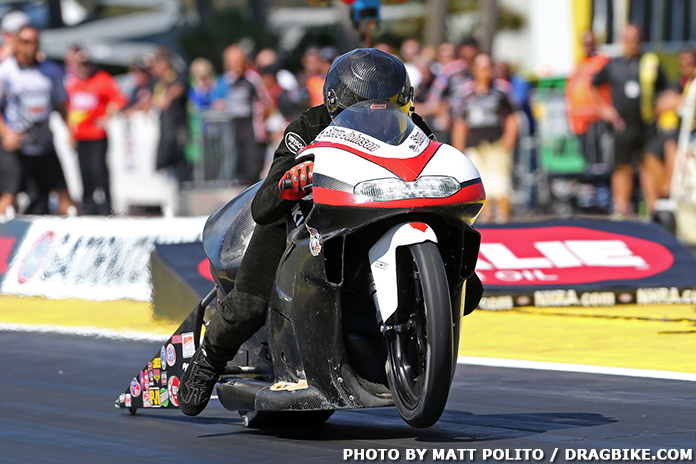 Johnson stole the show in Gainesville, racing past early round foes Katie Sullivan, world champion Matt Smith and Hector Arana Jr., who beat Johnson at Gainesville in 2012. By defeating Pollacheck in the final round, Johnson repeated his 2005 performance that saw him win the Gatornationals and take the early-season points lead, while also posting the first Suzuki victory in the class since 2011.

Since winning in early March, Johnson hasn’t stopped smiling. He took the Wally to the most recent NHRA event in Las Vegas, posing for pictures with fans even though the Pro Stock Motorcycle class didn’t compete at the event.

After struggling late in the 2013 season and failing to make the Countdown to the Championship, it’s been a memorable turnaround for Johnson. He’s been impressed with the work his team put in during the off-season and his Suzuki seems in a better place than it has been in recent seasons.

“One of the fun things about winning that first race in Gainesville is you really get to enjoy it,” Johnson said. “We’ve narrowed the gap in the class a lot and we’ve definitely found something good.”

The next step is repeating it at a race that presents challenges outside the norm. With riders taking up spots in all four lanes at the NHRA Four-Wide Nationals, there is plenty to take into account in order to be successful. But Johnson embraces that challenge, much in the same way he marvels over the uniqueness of the race.

“I love it for our sport,” Johnson said of the event. “It’s so different and gives the fans the drama and the excitement. Fans want to be entertained and this is the epitome of entertaining them. It’s hard to prepare for, but it’s our job to rise above, put on a good show and be good at it.”

The top names in the class will be stacked across all four lanes and Arana Jr. will face tough competition in his quest to repeat at the NHRA Four-Wide Nationals. Smith won the event in 2010 while the likes of Eddie Krawiec, Andrew Hines, Michael Ray, John Hall and more of the two-wheel contingent will also try to add their names to the winner’s list. Johnson, whose last win came at the Charlotte fall event in 2008, certainly fits into that mix as well, while also noting the unpredictably everyone must be aware of for this race.

“Probably the biggest challenge we have is just being organized to be ready to race,” Johnson said. “With four lanes, there’s just nothing that you can count on. There’s nothing that can prepare you for it, and that’s what makes it unique.” 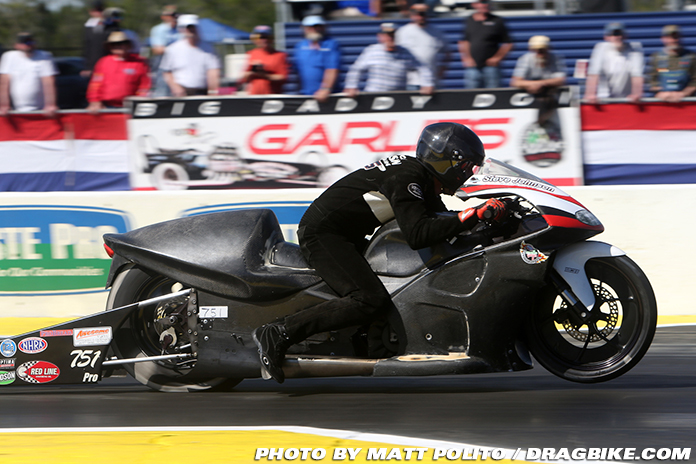 FORMAT:
Qualifying sessions and elimination rounds will be conducted using four lanes in all Mello Yello Series classes; Lanes will be identified from left to right facing downtrack as 1-4; The standard Friday qualifying procedure of a top 12 format will not be in use; Two Christmas trees will be in use, one between each two lanes; The Compulink Autostart system will continue to be utilized and it will not activate until all four vehicles are pre-staged and one vehicle has staged; The ladder structure will feature Race A: qualifiers 1, 8, 9, 16, Race B: qualifiers 4, 5, 12, 13, Race C: qualifiers 2, 7, 10, 15, and Race D: qualifiers 3, 6, 11, 14; Race A and Race B will be on one side of the ladder, while Race C and Race D will be on the other; Lane choice for eliminations goes to the driver with the quickest E.T., then the second-quickest, and so on; The first two drivers in each elimination round to cross the finish line advance to the second round and final; In the final round, teams will finish in the order they cross the finish line (barring any red-light starts), with winner, runner-up and two semifinalists in that order.