In Pro Stock Motorcycle, Pollacheck capped off his dream weekend with his first career victory in the class, beating Andrew Hines in the final round with a 6.790 at 200.53 on his Strutmasters.com EBR, breaking the track speed record he set on Saturday in the process. Pollacheck also qualified No. 1 for just the second time in his career, advanced to the finals of the Mickey Thompson Pro Bike battle and joined the DENSO 200-mph club earlier in the weekend, finishing it off with the victory on the biggest possible stage. He raced past Michael Phillips, Angelle Sampey and Steve Johnson to reach the final round, riding past Hines in the finals and setting off an emotional celebration.

“There’s so many people that put in so much work and effort to help get us here,” Pollacheck said. “My wife, Susan, has really pushed me, and Matt and Angie Smith have given me an amazing bike. Michael Ray, my crew guy, he’s the baddest man on the planet. This bike was just flawless all weekend. This is like the biggest thing ever. I can’t even believe it. It’s just awesome.” 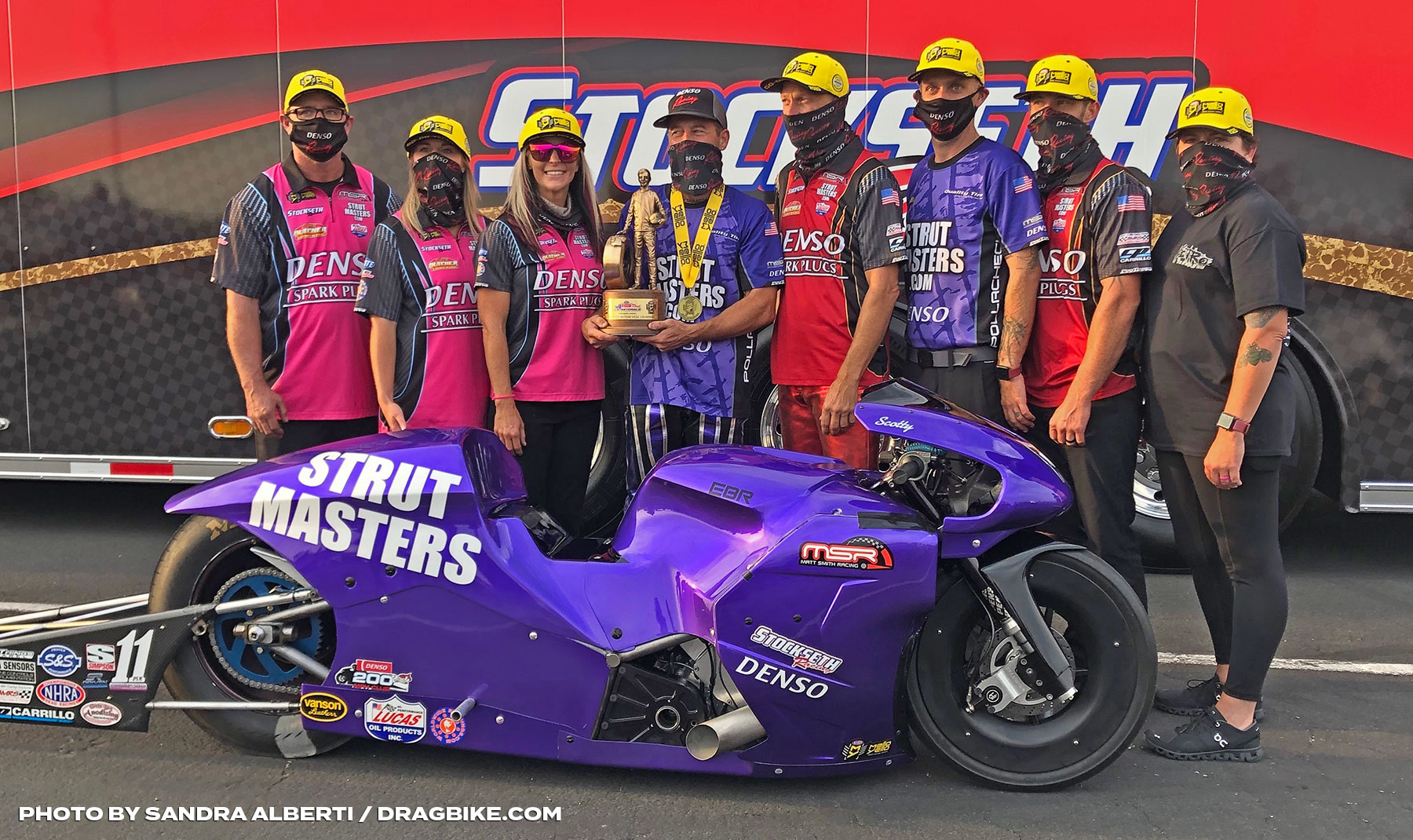 Pollacheck suffered the red light in the Mickey Thompson Pro Bike Battle, but he did take the No. 1 qualifier in Pro Stock Motorcycle with his run of 6.789 at 200.29, breaking the track speed record on his Strutmasters.com EBR. It gives Pollacheck his second career No. 1 qualifier and he will face Michael Phillips to open raceday. Eddie Krawiec qualified second with a 6.790 at 199.76 and Smith took the third spot with a 6.792 at 199.76.

“It’s been an awesome day, going 200 mph, getting the No. 1 spot and getting to race in the final round of the Mickey Thompson Pro Bike Battle,” said Pollacheck, who also earned the fourth and final spot in the DENSO 200 mph club. “It’s already been an awesome weekend and this has been a really good day for us.”

In Pro Stock Motorcycle, Angie Smith rode to the top spot with a run of 6.807 at 197.31 on her DENSO Racing EBR. If it holds, Smith, who has one career win, would qualify in the No. 1 position for the first time in her Pro Stock Motorcycle career. Eddie Krawiec, a multi-time world champ and two-time U.S. Nationals winner, is currently in second after his pass of 6.834 at 198.12 and Scotty Pollacheck rounds out the top three after going 6.864 at 197.28. In addition to final qualifying in the class on Saturday, the Mickey Thompson Tires Pro Bike Battle will also take place, as eight Pro Stock Motorcycle standouts will compete for the $25,000 prize.