Coming into the Super Thunder Good Friday Easter event at Willowbank Raceway, Chris Matheson found himself in the uncomfortable position of sitting third in the 400 Thunder Top Bike Championship.

Having faced a couple of curve balls over the past few weeks, the reigning Australian Top Bike Champion knows all too well only the strong survive in the sport of drag racing.

“I knew coming I needed to be on my A-Game if I was to be in contention for a potential sixth title,” said Matheson. “I couldn’t afford to fall behind any further.” 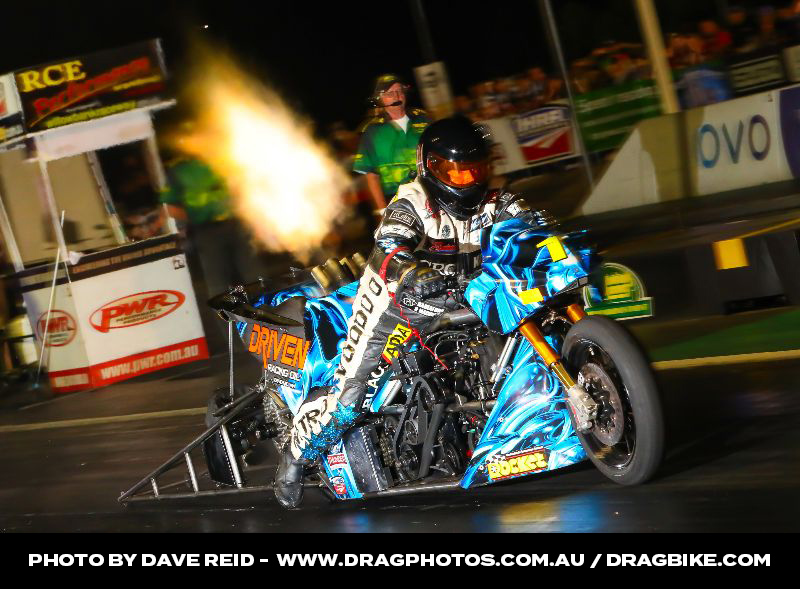 In the lead up to the Super Thunder championship round, Matheson had his work cut out when he suffered substantial damage to the bike after breaking the drive chain at a Willowbank test session.

In a true demonstration of why he is a 5x champ, Matheson rolled up his sleeves, and along with his Nitro Voodoo crew, burned the midnight oil and went to work.

Things didn’t start well when during a test session on Thursday a dropped cylinder resulted in an engine swap.

The following day saw four bikes front for eliminations. Running the 400 Thunder All Round Format, Matheson and Spann paired together. The result was a 6.37 win for the Nitro Voodoo machine to a 7.2 ET.

“The plan was to get maximum points on every run,” said Matheson, so that meant win lights and low ETs.”

The drama continued for Matheson with another engine swap prior to Round 2.

“I had a solo run when Jay Upton failed to front. The bike went 6.42 seconds with an early shutoff. At this point, we had Low ET and was almost 7 tenths quicker than my nearest rival!

Unfortunately, the final saw rain cancel the remainder of the event.

“To say it was disappointing was an understatement,” said Matheson. It’s been a hell of a past few weeks thrashing to get the bike repaired and going rounds was so important for us. We were certainly playing a numbers game and doing what needed to be done to stay in this championship chase.”

“My crew really stepped up and did an outstanding job. With two engine swaps, the hard work paid off as we were the quickest of the field.

“I knew we had a bye run in the second round so decided to run it out to half-track to bed in the new motor. The bike felt strong and clicked off a 6.4 ET which was good enough for us to go into the Top Bike final and take on Gavin Spann.

“This was almost déjà vu to the last round in Sydney when we were lined up in the final against Spann. Unfortunately, the event was cut short following a major crash in another division. 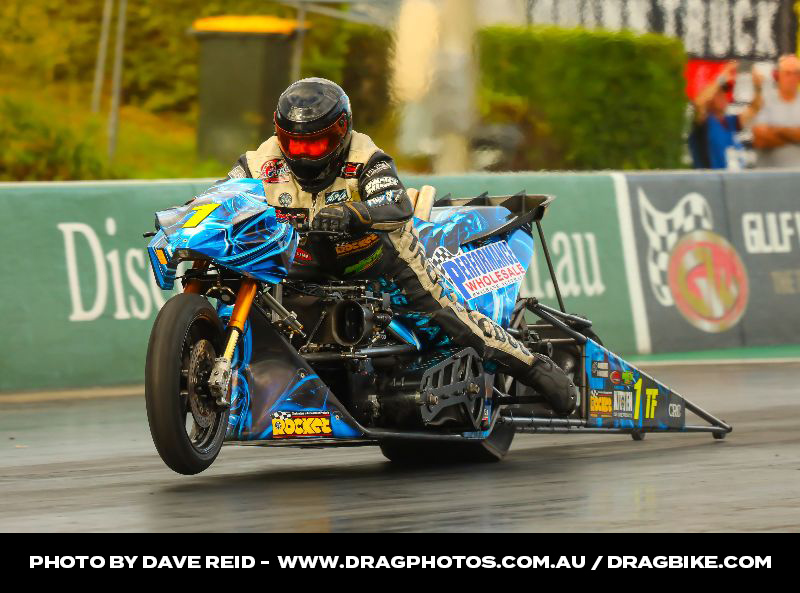 “The bike is strong and showing plenty of potential to run some quick numbers. We are really looking forward to the Sydney round in a couple of weeks. The track is one of my favourites as I enjoy the atmosphere and we always see a great crowd.

“We have another busy schedule ahead of us with repairs to engines and the chassis. Sydney is shaping up to be a big one and championship battle is certainly on.

Matheson went on to say,” Thanks to all the fans and supporters who dropped into our Nitro Voodoo pit area to say hi. We really appreciate your support.

“Special thanks to Andrew Searle from Acme Fibreglass for his outstanding help in repairing our smashed-up carbon fibre body following the broken chain in short notice.

“And finally, I want to take this opportunity to welcome two new supporters – Driven Racing Oil and Performance Wholesale, who also stepped up to sponsor Friday’s Top Fuel Motorcycle bracket. See you in Sydney in a few weeks.