Matheson Zeroes In On Finals

Chris Matheson has always been a man on a mission. He is currently leading the Australian Top Bike Championship, and if all goes well at this weekend’s Gulf Western Oil Nitro Thunder, he will be well on the way to take out an unprecedented sixth title.

“In my business life it’s all about KPI’s, performance and challenges,” said Matheson. It’s no different in my racing world. I know some people do it for the thrill and speed, however for me it’s the challenge of being the best, breaking records and winning championships.

When the 5 x Australian Top Fuel Motorcycle champion Chris Matheson withdrew from racing last November in Sydney due to a spinal injury, rumorscirculated that the 10-year veteran racer was done. 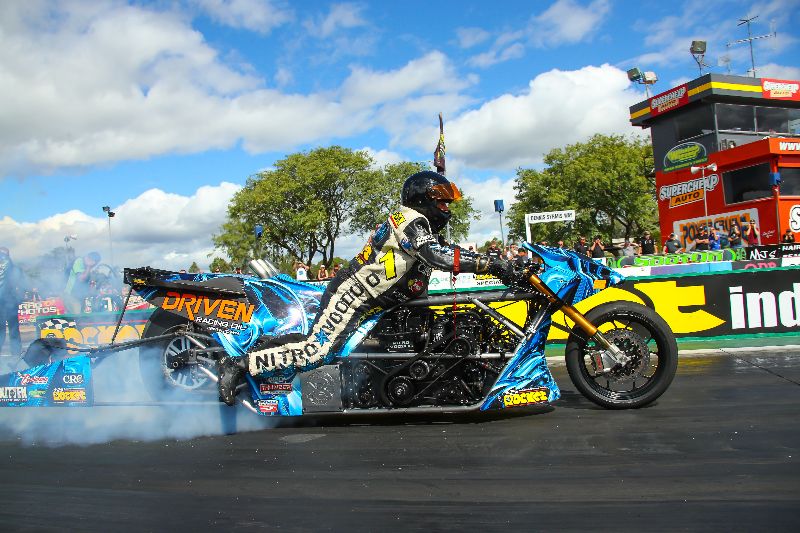 “I was challenged to prove them wrong. I’m sure my family and friends would like me to find a less demanding sport, but that’s not me. It’s not in my DNA. I love going fast and winning championships.

“My doctor has often said maybe I should take up something less stressful and punishing. My reply is not today!

This weekend Matheson and his Nitro Voodoo team return to Sydney Dragway for the third time this season to contest Rd 5 of the 400 Thunder Top Bike Championship.

Looking back to Round 2 of the championship, Matheson recalls the challenges he was faced with following the back injury he sustained during Friday’s qualifying. Despite a visit to the doctors, the pain was unbearable, forcing Matheson to withdraw from further competition.

Matheson said,” We have been chasing our dream all year to run quick and win rounds, however in the process, the best strategies don’t always work out.

“Sometimes you win and sometimes you don’t. Sometimes mechanical parts fail or even people can fail, as it did in my case.

“I felt sick to the core letting our supporters and importantly my team down. Pulling out was a defining moment. It also didn’t take long for the rumours to circulate, but that was to be expected,” explained Matheson. 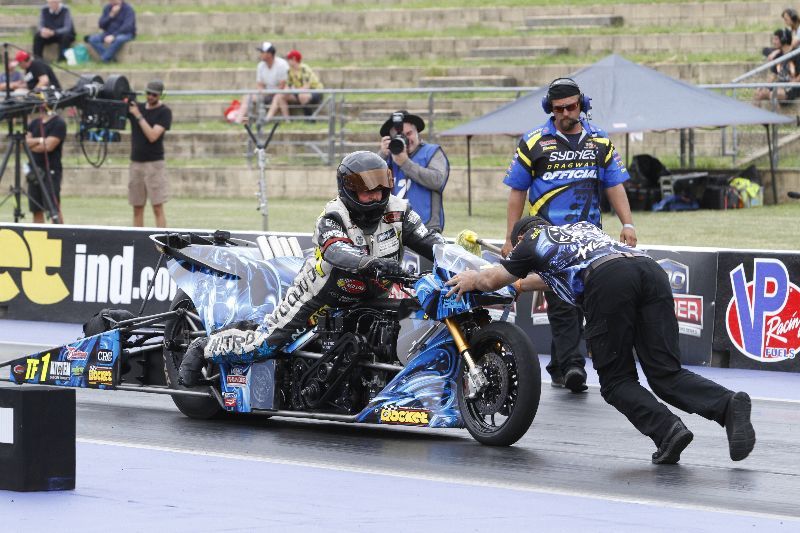 “But that was then and this is now. This weekend I’m 100% focused on our race strategy, as is the entire team. We are determined to reach our goals and we know there will be some bumps, but that’s the challenge of our sport and the test of true character, no different to the daily lives we live.”

Matheson leads the championship at the critical point of the series. With just two rounds left the opportunity to gain points is diminishing.

“A points buffer would be beneficial to any of the front runners prior to the Winternationals, said Matheson, however, let’s see what plays out this weekend.”

Matheson holds the Sydney Dragway track record of 6.07 seconds and is focused on bettering that and bagging some more points.

“Last time in Sydney we went 6.08 only to see the final uncontested due to an incident with a car that damaged the catch nets. We were definitely trying to go quicker; however, it was taken out of our hands,” said Matheson.

“The track will be good and we expect a big crowd in attendance. We also expect a good field of Top Bikes who have the potential to upset the balance.

Matheson finished by saying, “The Australian Top Bike Group will be hosting, a free Nitro Thunder Meet & Greet BBQ on Thursday night. We are Inviting racers, crew and fans to drop in around 8 pm for a cold drink and a sausage sandwich. Hope to see you there.”