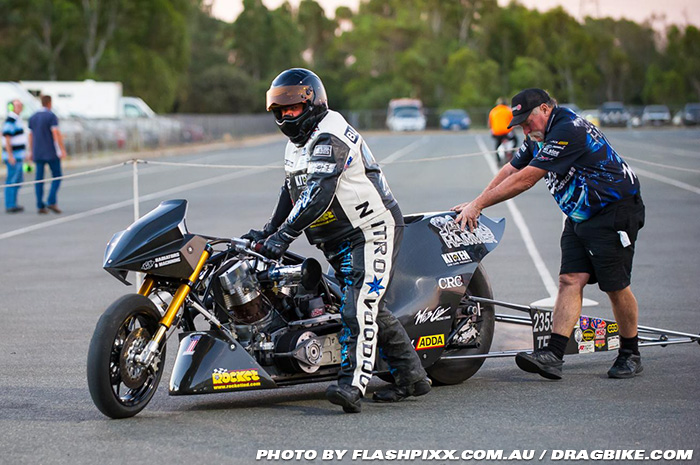 After a win in Round One of the Pro-Series Australian Drag Racing Championship, Multiple Australian Champion and current Record Holder Chris Matheson is hoping to back up his Nitro Slam winning performance.

Matheson a Brisbane based Top Fuel Motorcycle racer is keen to pick up from where he left off earlier this year at the season opener and is aiming to score more points in his Championship chase for 2016.

This season is a short one, with only five meetings at three venues, we are the outsiders racing at the Western Australian lions lair, with no home track advantage. Last time we travelled to Perth, we took on 11 Perth locals, nearly all Nitro Harley’s in a massive 13 field line up. Clearly, we are focusing on maintaining our good form, but it won’t be easy.

The last round saw new young blood into the ranks including Les Holden, Wayne McGuinness & Ben Stevens, which is good news for our sport. Whilst ever the younger guys come through, it’s healthy for our sport. We need to continue to grow the sport.

Matheson said “his new ride “Jack Hammer” gets more comfortable with each outing. I’m confident with a few more meetings, we will step up to push the front runners and make Rounds count. I know from experience, if you want to chase a National Championship, you need to get through as many rounds of racing as you possibly can to accumulate valuable points. Top Qualifier and fastest MPH puts the icing on the cake with a win.

At the end of the season that’s what counts, along the way the limits will be pushed and records will either be re-written or at least threatened as the top guys punch it out to take the points. 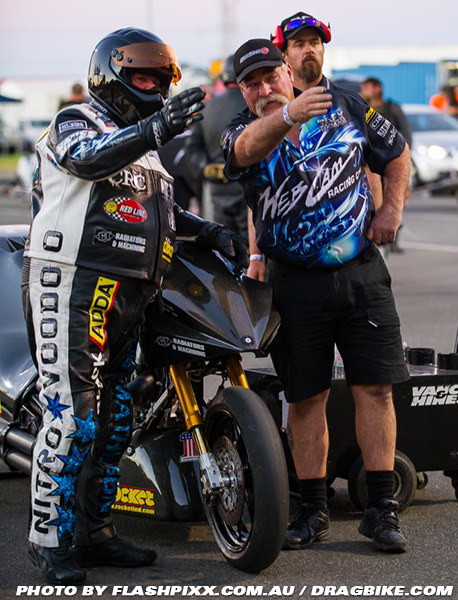 To go rounds you need a good reliable Team that knows the procedures, can think on their feet and have the will to win and I’m fortunate that’s what I have. An amoury of parts and support from sponsors, family and friends also gives you the recipe for gathering points. Matheson said “sure the rider is important, but without all the Team and the jewelry, the bike is just an expensive bar stool, that makes a lot of noise.

Everything needs to come together to get the results, weather, the track, tune-up, the bike, the Team, the rider all need to work as one if you’re to be a contender.

I know how critical it is to start well in a Championship and that we have, however, we need to step it up if we have any chance of progressing through to be real contenders at the important end of Season. Sure you need to make every final, but you need to be quick and fast to get all the points available at each round.

My Team are all chomping at the bit, waiting to race at the next double round over the weekend of Saturday 28 February & Sunday 1 March 2015, we just cannot wait. Bring on the Nitro Max.

DME Racing Ready to Launch into a New Year DME Racing will start the 2021 Pro Street season with a new rider on the World's...
Read more