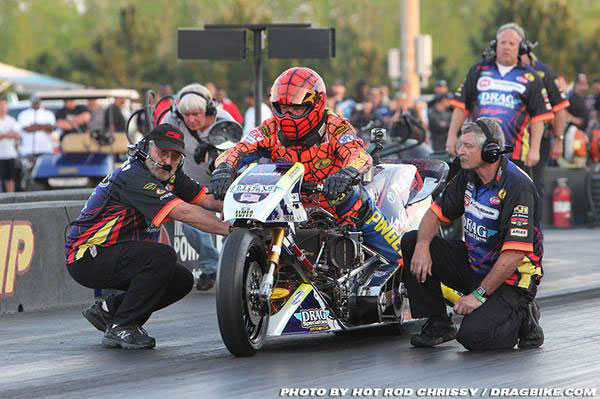 After winning Round One of the Australian National Drag Racing championship, Nitro Harley rider and Multiple Australian National Champion Chris Matheson needed some clutch spares in a hurry, Matheson said Larry has been a close friend since we bought the former “Hulk” renamed Nitro Voodoo machine back in 2009. 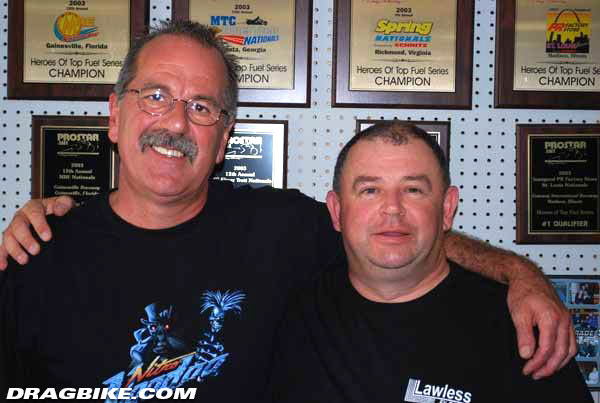 Now competing on his Nitro Harley “Jack Hammer” Matheson said he needed specialised clutch parts to ensure the bike was 100% right for the next double round in Perth in two weeks’ time.

Ordinarily, I would have the parts in our workshop, however, the ‘workshop fairies eat them’. “I knew Larry could help, as he runs the same clutch set up as we do. Larry sent me the parts from his own stash and we had what we needed in a few days. These Fuel Bikes are all hand-made, along with the parts we run, so you just can’t get the pieces to the puzzle off the shelf from Coles or Walmart”.

I recall the phone conversation with Larry “Damn Bubba, how did you break that s#*t, those Hog’s can bite you.

He’s right, he knows, he ran Nitro Harley’s before he moved to the Multi-cylinder machines, which has led him to multiple records and championships, Guinness Book of Records, not to mention the first man to crack into the 5 second zone. 34 years of racing tends to give you untold knowledge.

Yes, he is Top Dog when it comes to Fuel Bikes. Matheson said the “Jack Hammer” is ready to run the next double round, we have all our parts and will be ready to go. 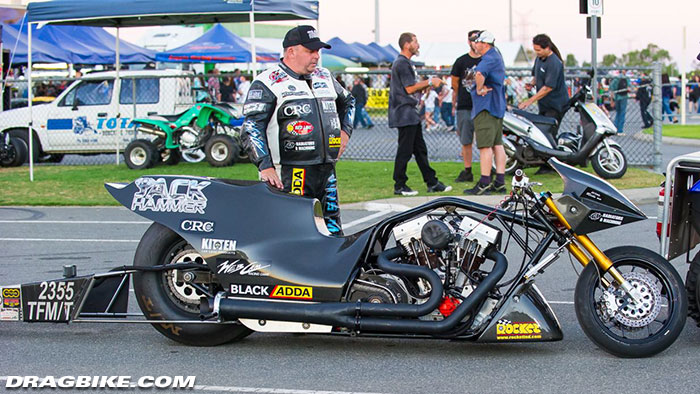 Chris Matheson contemplating his next pass

The next meeting “Nitro Max” at Perth Motorplex, Kwinana, Western Australia is a crucial round in the Australian Championship, as it’s a double round and there’s only two more races after these meetings left in the Championship.

Without a good result, you have no chance in the Championship, because there just isn’t enough points on offer if you don’t make the final every round in this shortened Championship.

The shortened double rounds are exciting for both the competitors and the fans, we see three passes, with the final pass the decider, so you only get one test run, then a semi style in the second, which sends the quickest two to the final on the day. Certainly, no room for tactics, it’s go hard or take an early shower.

I love these deals, the more pressure, the better it is, I just can’t wait to jump on the bike again and test our metal.

Matheson leads the Championship after Round One on 107 points, closely followed by Mark Drew on 98, with Mark Ashelford in third position on 68 points.

The Nitro Max round will be held over the weekend of Saturday 28 February and Sunday 1 March 2015 at Perth’s Kwinana Motorplex, Western Australia.

Thank you once again to our Sponsors: