Crewman Graeme Turner servicing the Nitro Voodoo machine, in readiness for the X Champs in Sydney
The upcoming X Champs at Sydney Dragway is shaping up to be a big Top Fuel Motorcycle
showdown, with an oversized field of Top Fuel Motorcycle entries, all vying for the title.
Perth based Mark Drew will make the long haul across the Nullabor, along with Burnett and
Crawford, together with a contingent of East Coast Riders, all converging on Eastern Creek.

Sydney Dragway is the current Australian National Drag Racing Association’s champion Chris Porter’s
home track and Porter’s last win there sets him as the man to beat.Mark Drew is currently the quickest V-Twin Rider in the country, clocking regular 6.4’s at well over
200 mph. Drew is chasing the Championship from Porter, as are many others.
Still a no show from former Top Fuel Motorcycle Racers Athol Williams and Jay Upton, despite
rampant rumours of their return. Upton entered Round 1 in Perth, however, was a no show come
race day.

Sydney based rider Leonard Azzopardi, has also been talking up his chances, as we see him take on
the best Australia has to offer. Azzopardi has been a regular tester at the Sydney track, but hasn’t
competed at a National event on his Top Fuel Motorcycle for some time. 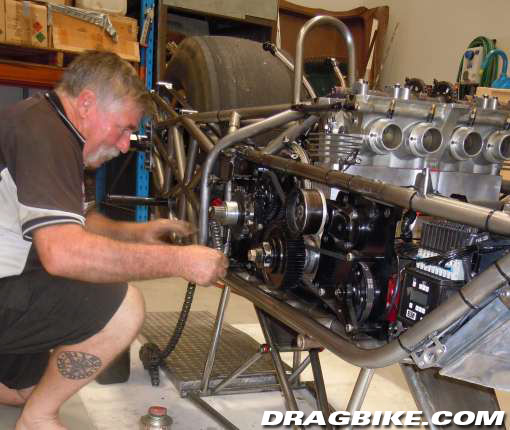 While there is a lot of talk, Matheson, multiple Australian National Drag Racing Association
Champion and current record holder, has been quietly working with his Nitro Voodoo crew, as he
continues to recover from his high speed (370 kph) crash at Sydney Dragway in May last year.
Matheson ran exhibition passes over the Easter weekend at Willowbank Raceway, were he struggled
with set up, however, still ran a 6.16, with an early shut off at 202 mph.

Nationally, the Matheson Santos Super 3 Extreme pass at 6.16 over the Easter weekend, has been
the quickest ET in Top Fuel Motorcycle racing in Australia since Matheson competed in May last year
at Sydney Dragway, where he ran a 6.098.

We used the Santos Super 3 Extreme event as a test session in the lead up to the X-Champs in early
May, which will be lots of fun.

My guys have been working hard on setting up the new bike and it’s nearly 100%.
I’m very confident we will run hard and will make the field in Sydney

BUILT TO WIN: STACK IT HOW YOU LIKE IT GRUDGEFEST 2K21