The sharpest, most up-to-date tools in the motorcycle drag racing box came out to win NHDRO’s biggest money event ever—the APE Summer Celebration and Big Money Shootout this past weekend at Lucas Oil Raceway near Indianapolis. But as late model horsepower with immense investments in carbon fiber and billet bits fell by the wayside, it was the two oldest bikes in the field racing for all the cash at the end of the day. 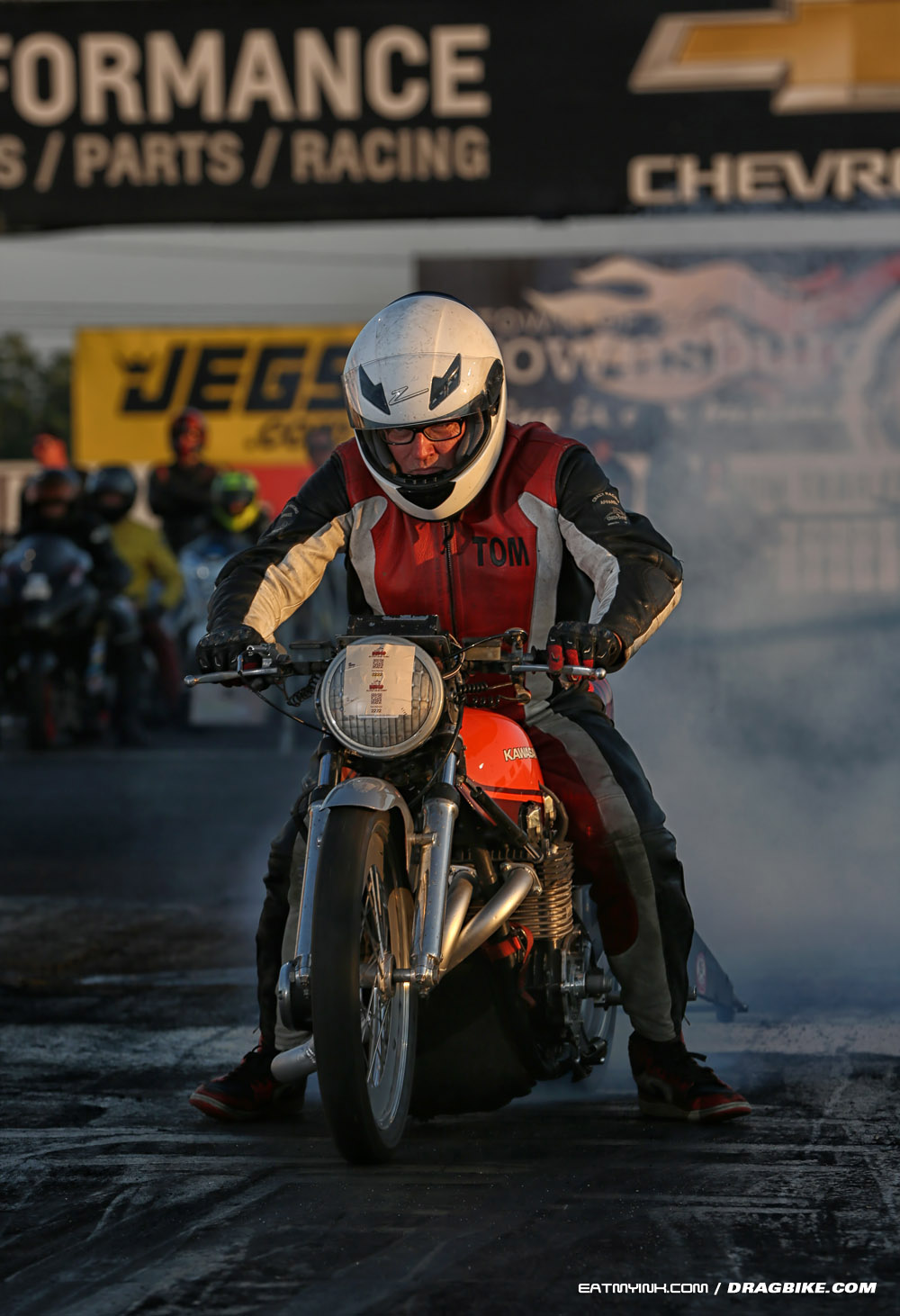 And they were two old school KZ Kawasakis built by the same guy—bracket veteran Tom Klemme, whose delay box bike won $11,000 in the final against Chad Isley on Klemme’s “old” bike. “That was a pretty sweet number on that one,” Klemme said about NHDRO’s Big Check.

The race format had 16 delay box bikes on one ladder and 16 no-box bikes on another, with the winners meeting in one final round. Isley took the tree against Klemme with a perfect light without a box, but took too much stripe and had to settle for a cool $5,000. “It was pretty cool having two old KZs in the final in 2019 in a world of ‘Busas and GSs,” said Klemme.

Later that same night, both bikes rolled up to the ready line AGAIN (Klemme’s with an actual spoked front wheel) in the semifinals of MPS Pro ET, and Isley had ANOTHER perfect light to Klemme’s .001. Tom took too much stripe and Isley advanced. 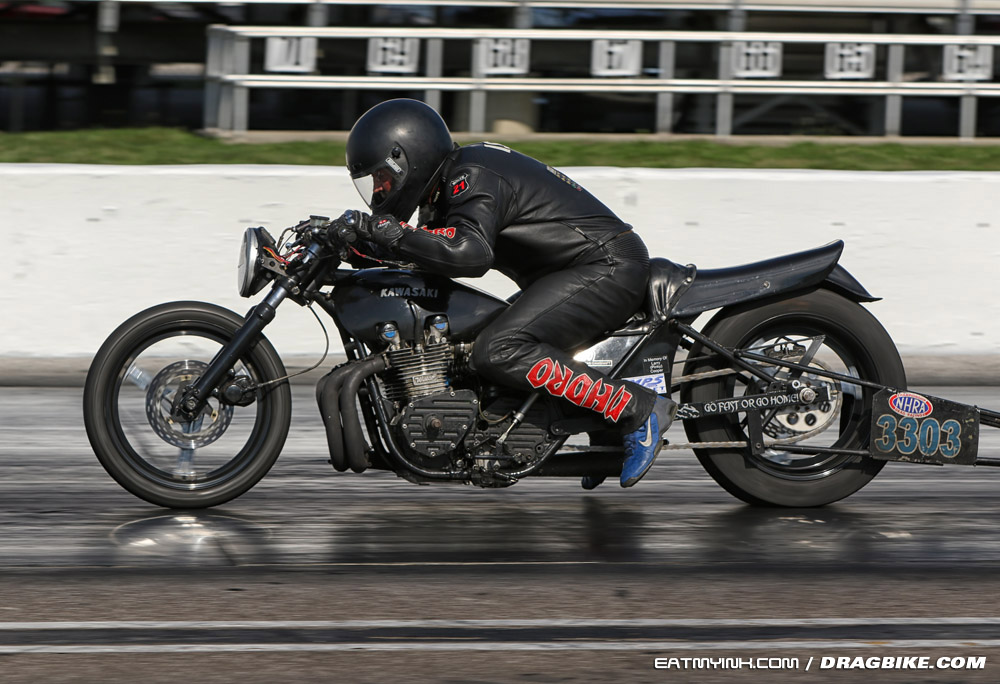 But wait—Klemme and his KZ weren’t through winning! They raced through a 48-bike M2.Shocks Crazy Comp 8.89 index field to beat Jeremy Teasley’s state-of-the-art no-bar Suzuki Hayabusa in the final, mostly via Tom’s .003 light in the double-breakout final. Louisvillian Kevin Cooper qualified number one and lost to Super Comp champ Ron Arnold in round 2.

Klemme dialed in as low as 8.66 in the August Indianapolis weather. “That’s about as fast as you can make these old Kawasakis in these conditions unless you start spraying them,” said Klemme, who’s won Pomona three times with his Kawasaki.

“Thanks to Joe Klemme, Jim Batten, John Mealy, and everybody that works for me back at the motorcycle repair shop in Iowa” 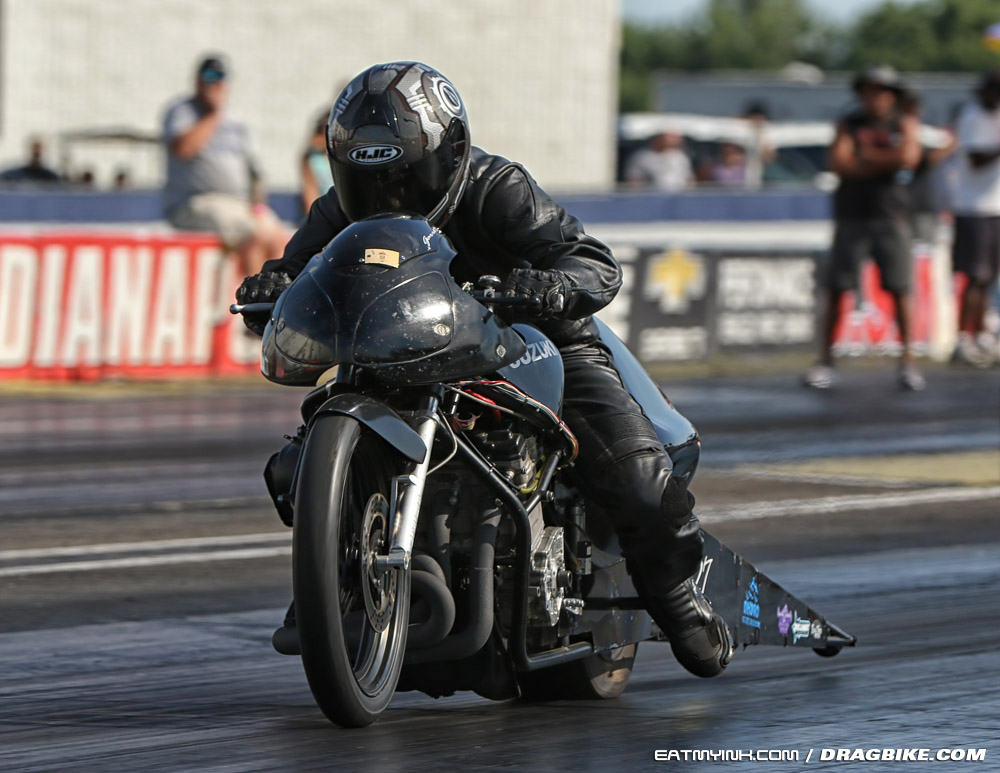 NHDRO wasn’t through handing out Big Money to Kawasakis, though. Twenty-six Pro Ultra 4.60 bikes vied for $5000 for the winner of the world’s quickest motorcycle index class, and at the end of the day, it was Louisville winner “Smokin’ Joe” Rodney scoring his second straight win. Smokin’ Joe took the tree with a .022 and his Kaw’s 4.61 was closer to the number than Jeffersonville’s Joey Burgess’ .040/4.62 on a Suzuki GS. 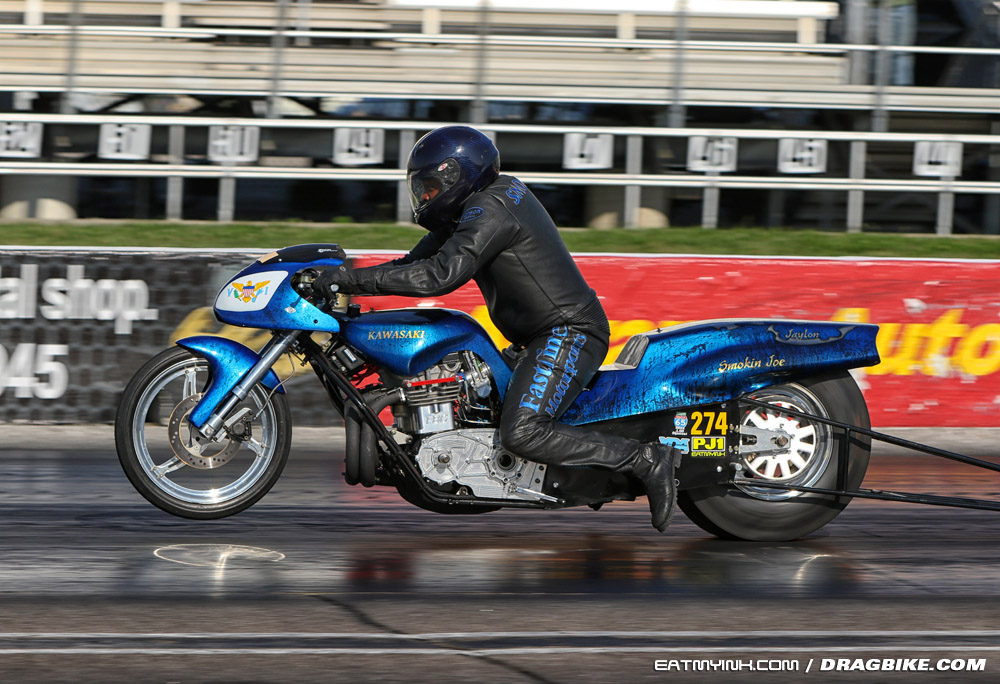 Rodney normally has tuning help from Fast Time Motorsports’ Jeff Jones and Billy Vose, but neither were in Indy. “They were not at the race track this weekend but they are always with me,” said Smokin’ Joe. “Jeff and Billy’s strengths and reputations as leaders, along with the quality of their teaching, afforded me the ability to claim the victory at this race.”

Number one 4.60 qualifier Jimmy Muntain lost to Richard Gadson in round 1. Gadson lost to Rodney in the quarterfinals.

With her thirteen week-old newborn Remy Lucille in her arms, Heather Wagner enjoyed the fruits of her labor—literally—in the Hardcore Cycles Top Gas 8.20 winners circle after slicing her way through a 42-bike field—including number one qualifier Bradley Shelhaas in the final and Jeremy Teasley in the semis. “A lot of great racers,” said Wagner. “It’s good to be back. We came back in Louisville and struggled.” 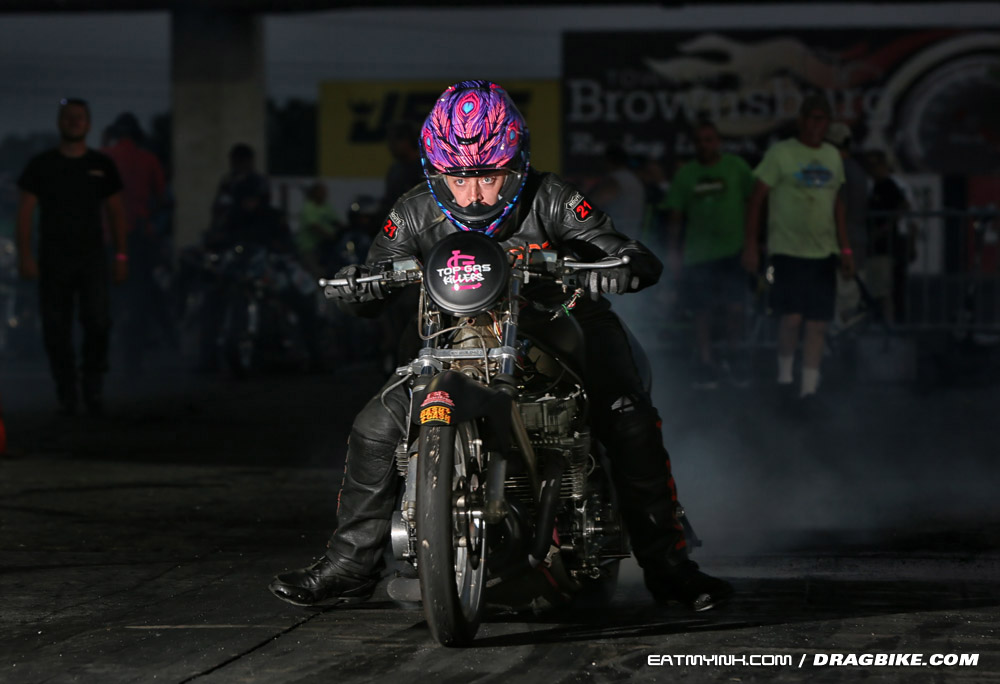 Wagner made pass after pass during Grudge at NHDRO’s Louisville race, and the hard work paid off. “We don’t even know how many passes,” said Wagner. “More than we’ve ever made at one event. We were beating our heads against the wall and it got to the point where it was ridiculous. But we came here and started over and it worked.

“I wanna thank my dad Mike and my mom Lisa, Bobby Brown, Kenny Schwartz, and James O’Hanlon. I couldn’t do this without James and my sister Rachel watching Remy.” 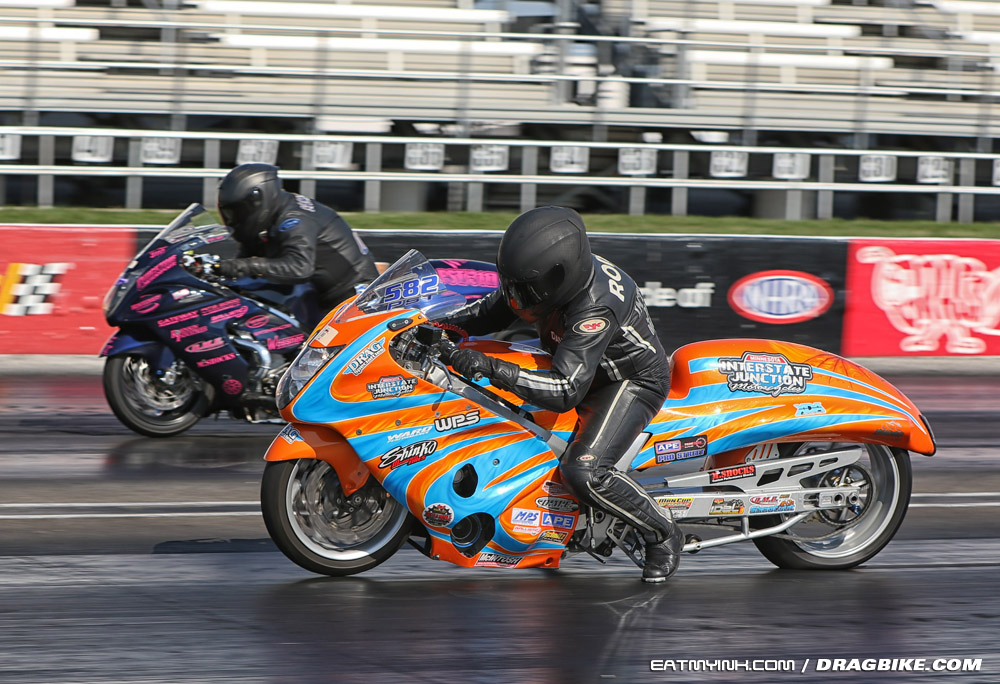 “Moved up on the G.O.A.T. List to a 7.119, went my first 200 and did it about five times, and went a little quicker than my son Shane on this bike (Shane ran 7.12),” said Roisen. “Meeting Ethan Barkley here in the final—what a great guy from Canada. He ran his best numbers ever here too.

“I’m proud to get this far with it, it’s a very frustrating class. Very humbling. But the Pro Street racers here have been super helpful. Rudy (number one qualifier Rudy Sanzottera) is always helpful, his crew is awesome. Thanks to M2.shocks. We have a motorcycle shop in Minnesota and I wanna thank our distributors Drag Specialties, Western Powersports, Shinko Tires, Motul Oil, and all the people that have helped me do this. It’s been a lifetime of help and I’m just tickled to be doing this.

“I’m really happy NHDRO is doing Pro Street here. The track was stickin’ for me every time.”

Richard Gadson agreed. “The track was perfect. As good as it gets. If I had a 6.50s capable Pro Street bike here, I could’ve gone 6.50s. Without a doubt. And I love NHDRO races—so relaxing.”

The event may or may not have been relaxing for former AMA/Prostar champion Rick McWaters, but it was a winning one. McWaters made his triumphant return in Penske Racing Shocks Street Fighter, where his .023 light allowed him to ease across the finishline against Phillip Gross and his .084. McWaters had a .003 light in his semifinal win over number one qualifier Ron Arnold. 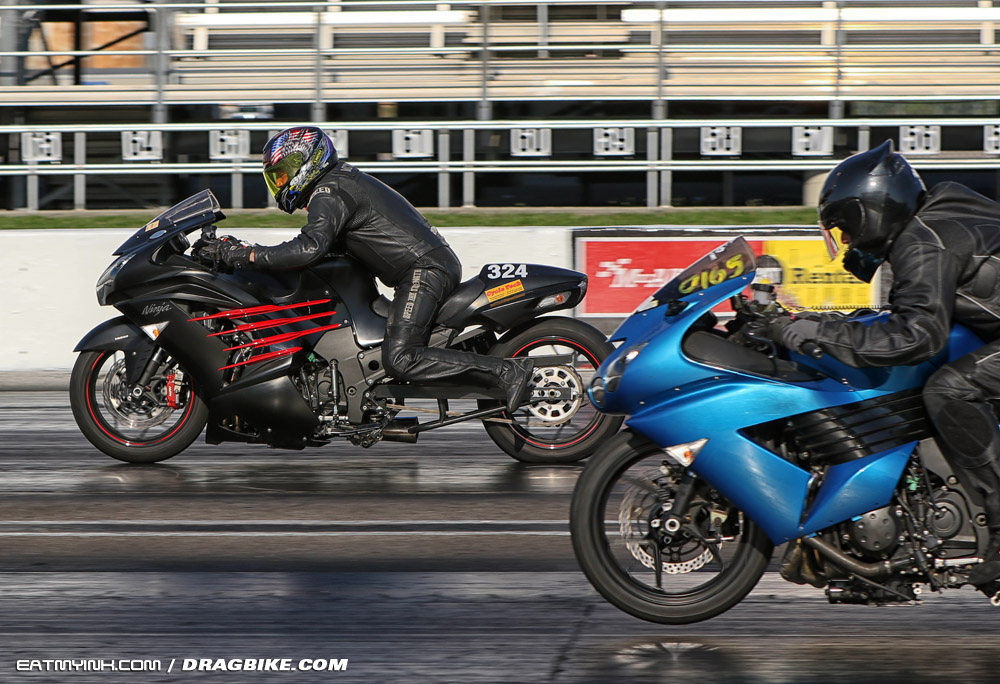 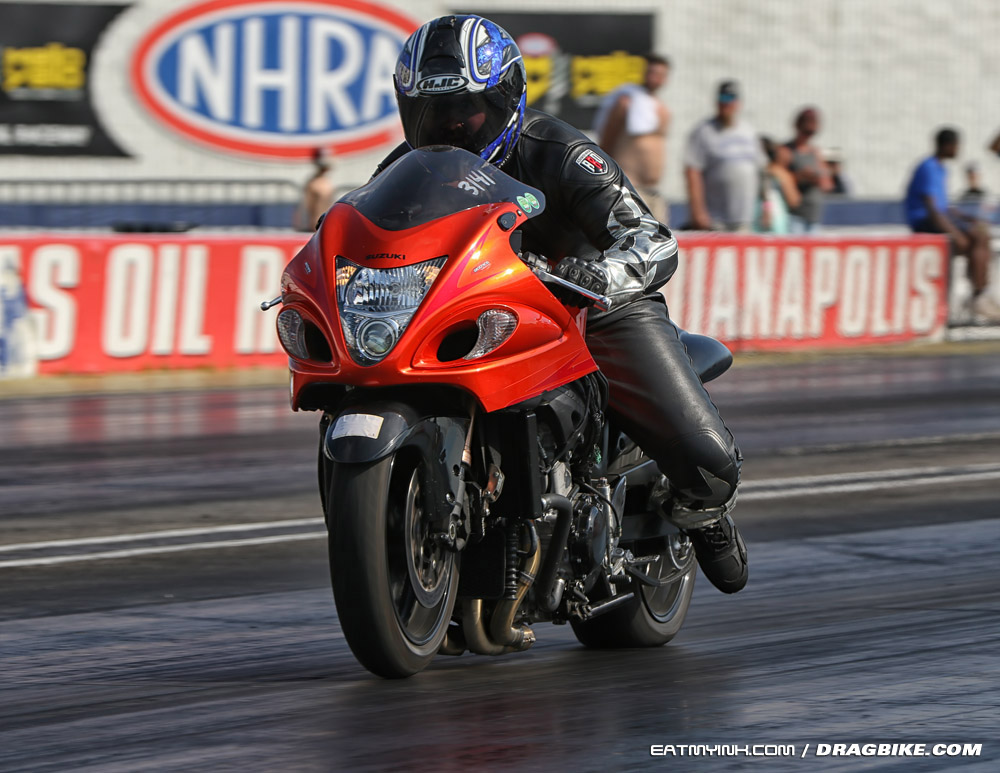 Markham had a .024 light on his ‘Busa streetbike to give him the advantage against Randy Parker, who had an .057 and broke out in Sunday’s Kevin Dennis Insurance Street ET final. 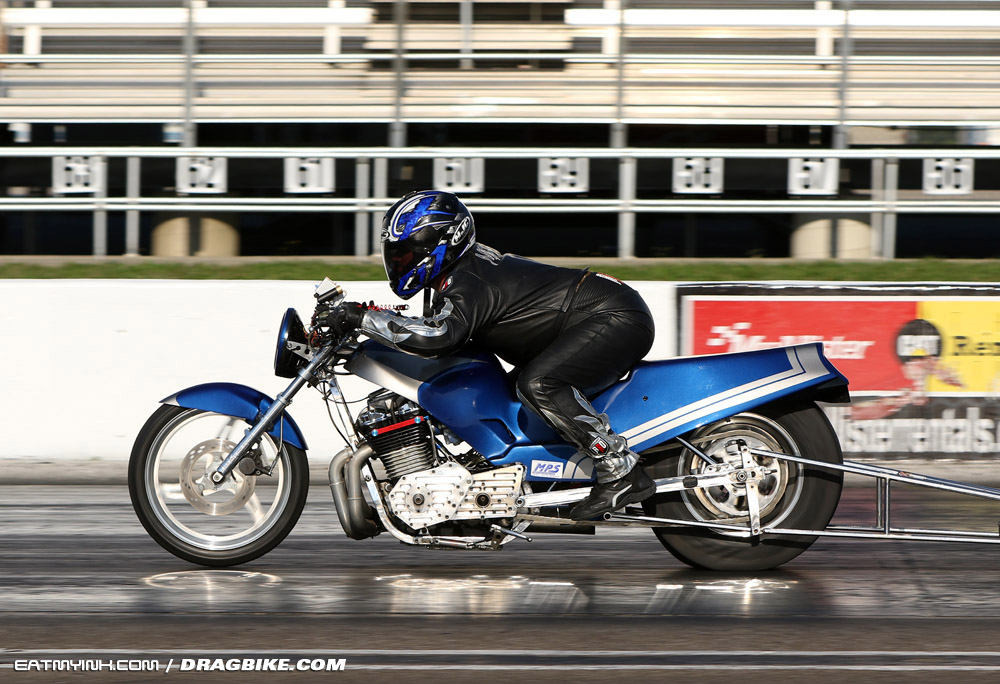 Jeremy Murphy benefitted from Michael Schmalle’s -.012 redlight in Saturday’s eighth and final round of Street ET. 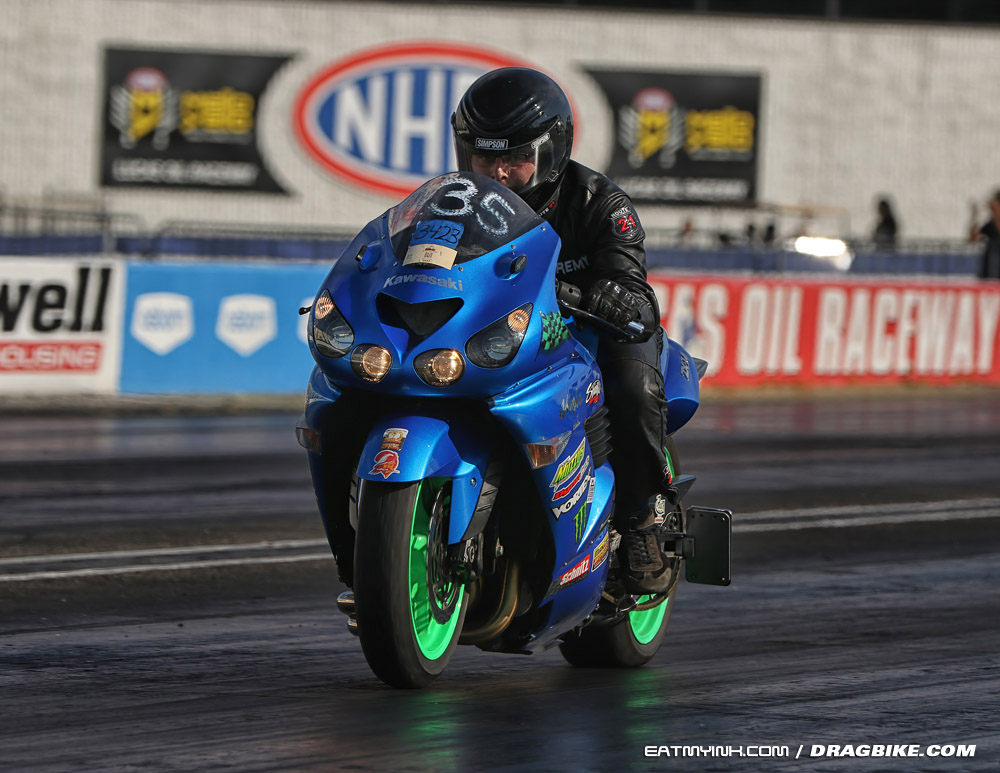 VooDoo Grudge was killer, with money races popping off everywhere for stacks, and twenties changing hands on the sidelines like Rockingham in the ‘00s. Big winners included Gaige Herrera on “Pee Wee” vs. Vince Hileman on “Family Man,” Teasley on Chris “CJ” Johnson’s “Tommy Gunn” vs. Joey Jobbe on “Anti-Social, ” and Louisville’s Brandon Holland on “Killer Bee.” 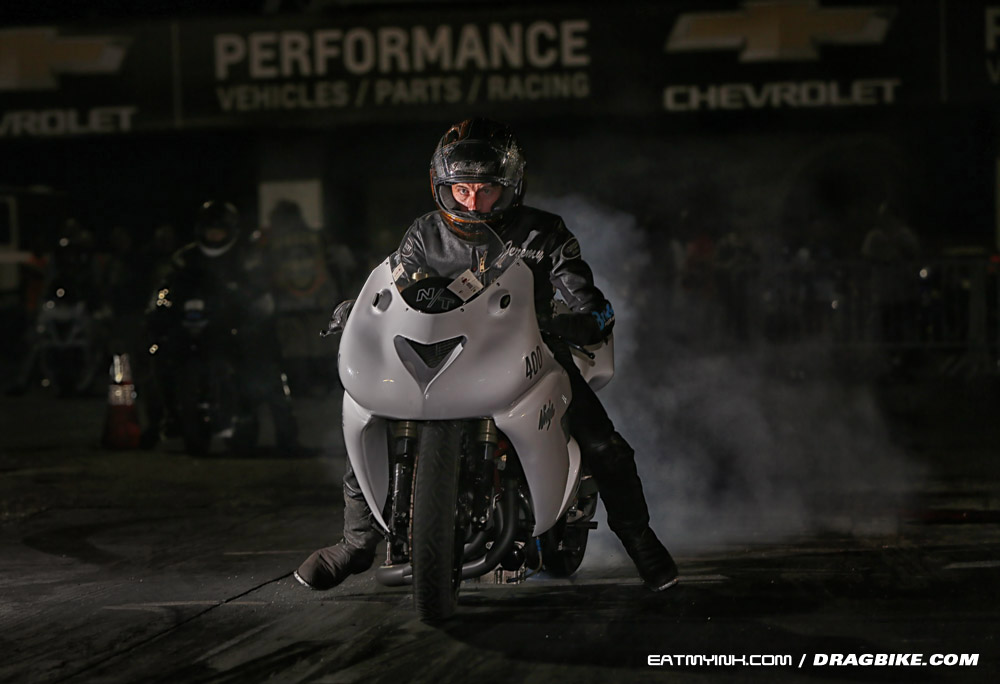 Brian and Niki Welch of NHDRO and Jay and Dianne Eshbach of APE thank everyone for coming out to Lucas Oil Raceway for this event, and NHDRO looks forward to seeing everyone at West Salem, Ohio’s Dragway 42 on August 30-September 1.