The first annual Sue Kackowski memorial race was the fifth of seven on the Orient Express Bikes in the Valley schedule.  And this event was like most August races, hot and humid, however, we had no rain as forecast.

In Brock’s Performance Street Et it was John Tisdale taking the win over a tire spinning Paul Anderson.  Zeke took the Exoticycle number one qualifier with an .012 light. And Duke Huyck was the DME Racng Quick ET winner with an 8.60.

In Vanson Leather Pro ET it was Bob Carlson taking the win on a red light from Guy Gardner.  Bill Tallman was the MTC number one qualifier with an .003 light.   Mike McCarthy took the Vantine Nitro Sports Quick ET cash with an 8.32 pass.

Brian propper was also the world wide bearings number one qualifier with an 8.68

On a personal note, it’s is with heavy hearts that BIV sends our condolences to the Carlson and Supczack families in their recent losses.   On a better note, Tyler D’Anthony is home and doing well.

Our next event is on September 10th with a chance for a Wally on Sunday 11th!   Hope to see you in the valley 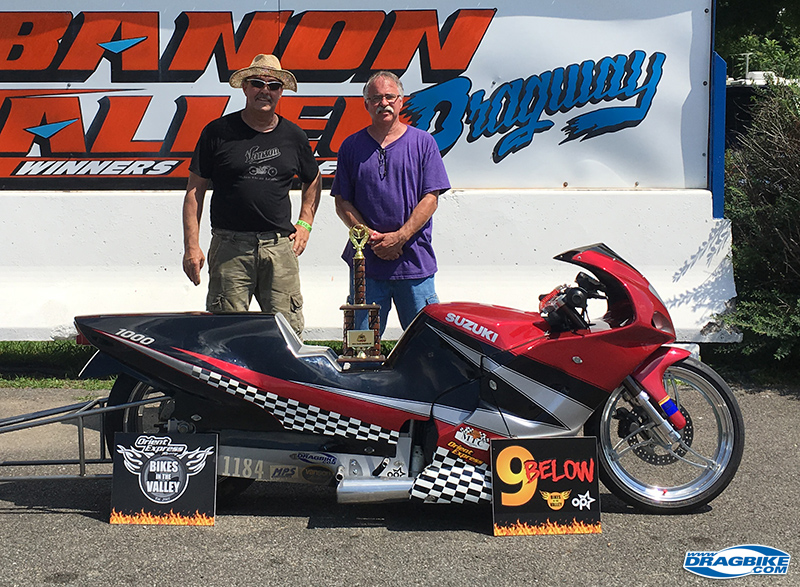 9below #1qual and ru