Sunday eliminations kicked off for Pro Street motorcycle at 10:17 AM, Memphis time.  I asked a few of the most experienced motorcycle crew chiefs prior to E-1, what they rated the track conditions at just before competition and I was told the surface was a 6 to a 7, as rated on a 1-10 scale.

As the day wore on, the sun came out and track conditions improved dramatically and racers performance reflected this.  During E-1, Justin Doucet’s 6.82 was the quickest elapsed time posted, Ehren Litton’s 213 MPH was the fastest lap and these numbers were surpassed as the sun turned a good track into a great one for E-2. 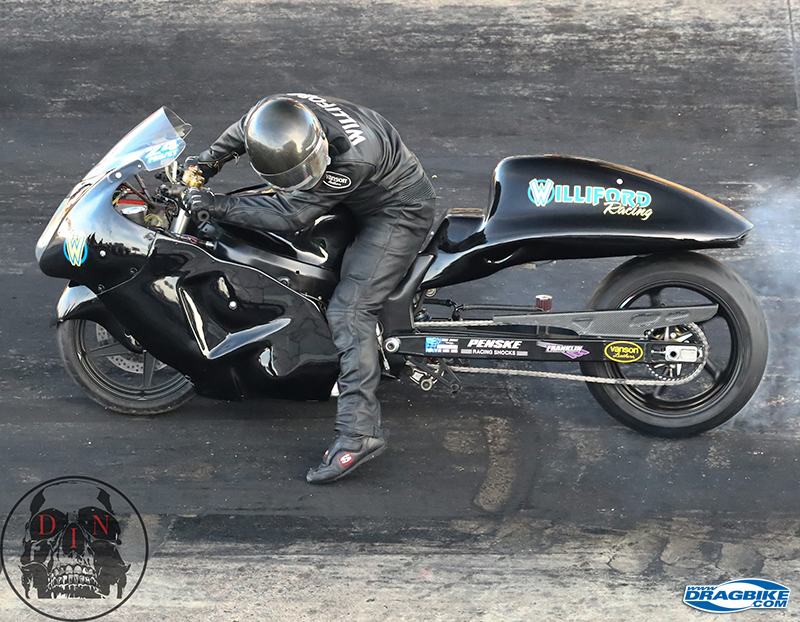 During E-2 action:  Jeremy Teasley had lane choice from E-1 and put Ehren Litten in the R Lane.  Jeremy encountered problems on the launch and that was it; Litten was gone with a solid 6.78 pass.  Ehren went on to face Jason Dunigan for E-3.  Jason won his round against teammate Terence Angela after Terence went red by .006. 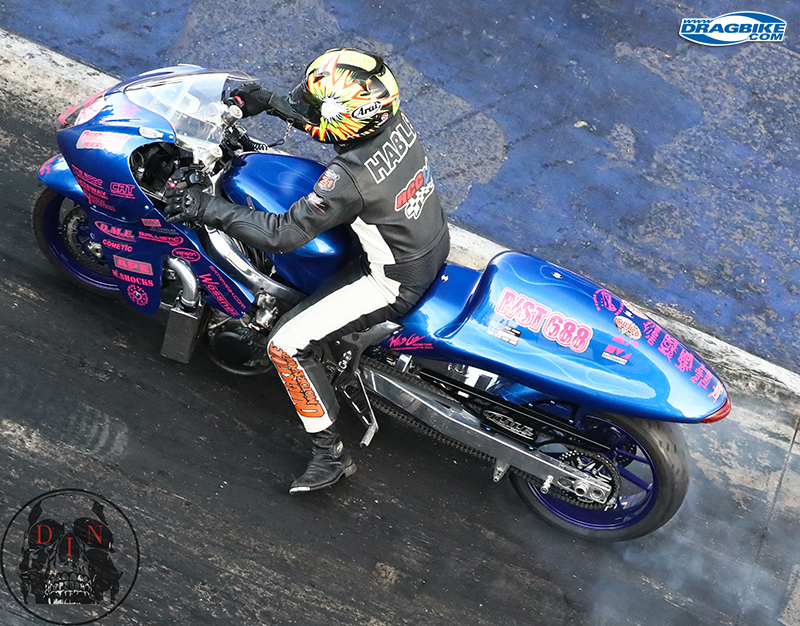 Rodney Williford defeated Joshua Franklin with a potential record-setting run of 6.80 @ 222.25 MPH.  That’s a new high MPH pass for Pro Street motorcycles in competition.  Ryan Hable advanced to face Rodney in E-3 after he defeated Rudy Sanzottera, 7.16 to 7.14, but the hole-shot, by Ryan made all the difference.

In E-2, Justin Doucet, who was on a tear all weekend, put a great 6.89 at 211 mph up on the board when he defeated Gaige Herrera.  Justin then took on Justin (Shakir) in the next round as Mr. Shakir took out Brandon Mitchan during E-2.

Chris Connelly defeated Jeff Lindeman who red-lighted by .035 seconds.  Chris had the match up with Gabe Fredrick in the next round.  Gabe trailered Jamie Hendricks in E-2 after Jamie went red by .008. 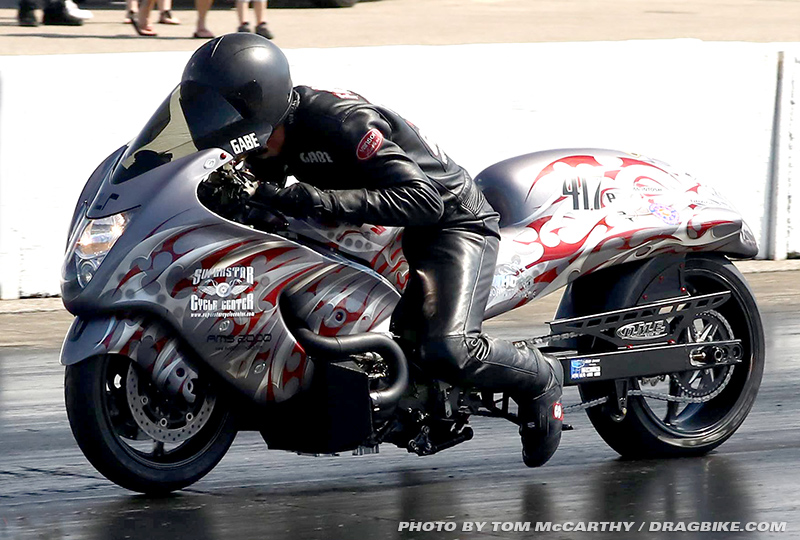 In E-3, Gabe Fredrick took on the DME backed ride of Chris Connelly and Gabe had Chris on the tree, .060 to .079 RT’s, but Chris faltered and Gabe stormed on to the Semi’s.  In the battle of the Justin(s), Justin Doucet got the better of Justin Shakir, 6.93 to a faltering 16.26 as Shakir had to abort his pass early. 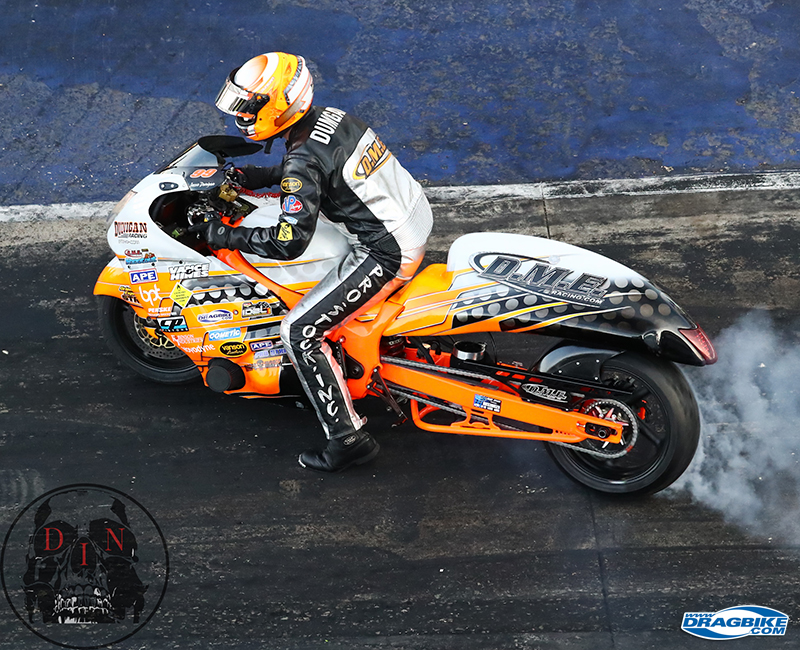 Ehren Litten then faced off against Jason Dunigan, and Jason developed problems on his run slowing early as Ehren posted a 6.81 @ 214 mph.  In the final pair out, Rodney Williford changed over from his left lane runs and began using the right lane, as he put Ryan Hable in the left lane which most racers preferred all day.  Rodney strapped a .001 light on Ryan, taking him very seriously, and produced a stunning 6.78 @ 216 mph.  Once again, the announcer, Brian Lohnes, went nuts on the mic, knowing the significance of these numbers, which became more important in the next round. 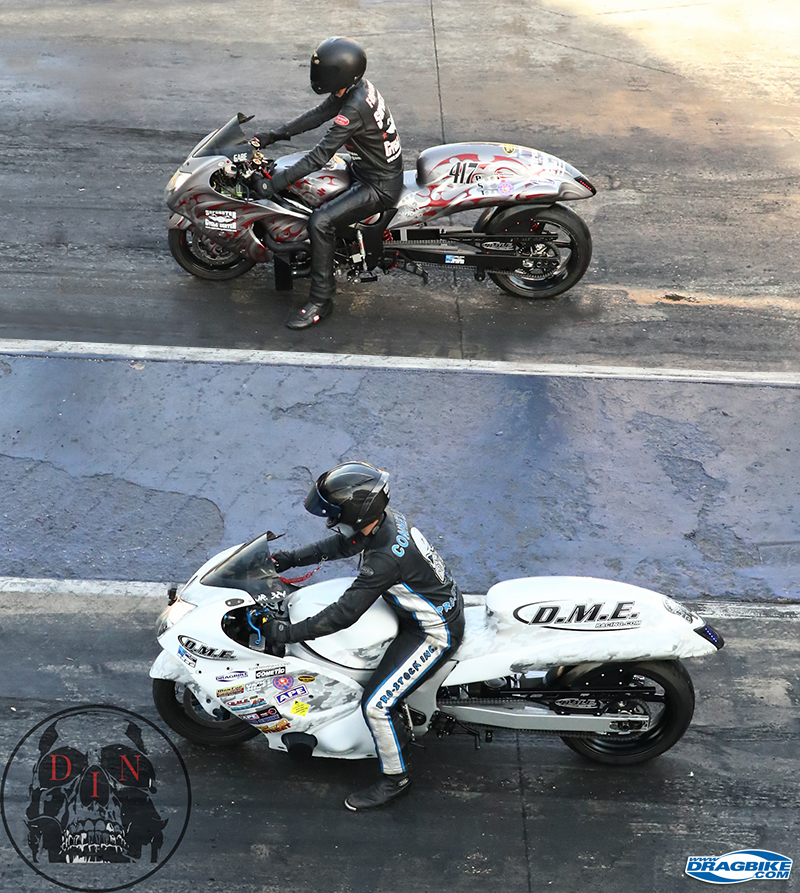 The Semi-Finals were dramatic for the fans in knowing teammates Rodney Williford would be facing Ehren Litten.  The two heavy hitters did not disappoint.  Williford was out first with a .021 RT to Litten’s very game .047, but this put Ehren behind the 8 Ball early.  And he almost made up the difference down track.  The final numbers show Rodney won the round with a 6.76 to Ehren’s 6.77, but what the numbers can’t show you is Rodney Williford had a serious wheel stand just at the 660’ mark and the front end came up again about 1000’!  It took tremendous driving skill for Rodney Williford to win this round of racing.  Gabe, with a single, knowing he would face Rodney in the final round, opted to just break the beam and it was on to the last round.

The final match up, under the lights was a great one.  Rodney once again got out first with a .062 reaction time, to Gabe’s .144 which buried him right at the start.  The 6.82 by Rodney Williford was all it took to trailer Gabe’s 6.94, giving Rodney his first Pro Street motorcycle win of 2017.  While Gabe will be known as the runner-up for this race, it was a HUGE win for Gabe Frederick as a personal achievement. 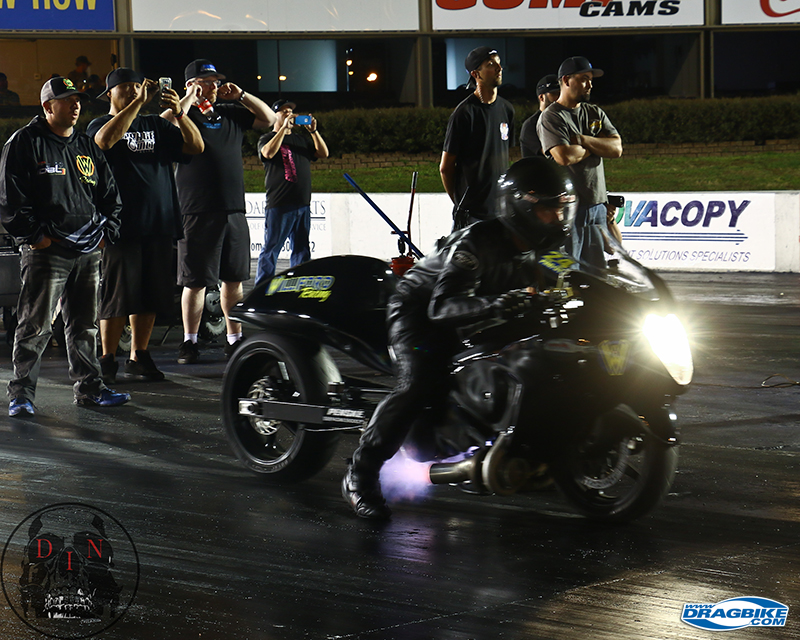 “I really am the happiest guy here man” he quipped in a post-race interview.  “I have like 12 time slips and only two of them are 7’s, the rest are all in the six’s; that’s huge to me” he beamed.  On social media, Gabe proudly displayed his time slips all in a row and he received great accolades, well earned, by his peers.  When people like Andy Sawyer, Rodney Williford and Brad Mummert pipe up and deliver a well done: you’ve earned.  Pretty much every single racer in Pro Street motorcycle gave him props and he earned it big time.  So too did the entire Pro Street motorcycle contingent who raced at the Outlaw Street Car Reunion IV event. 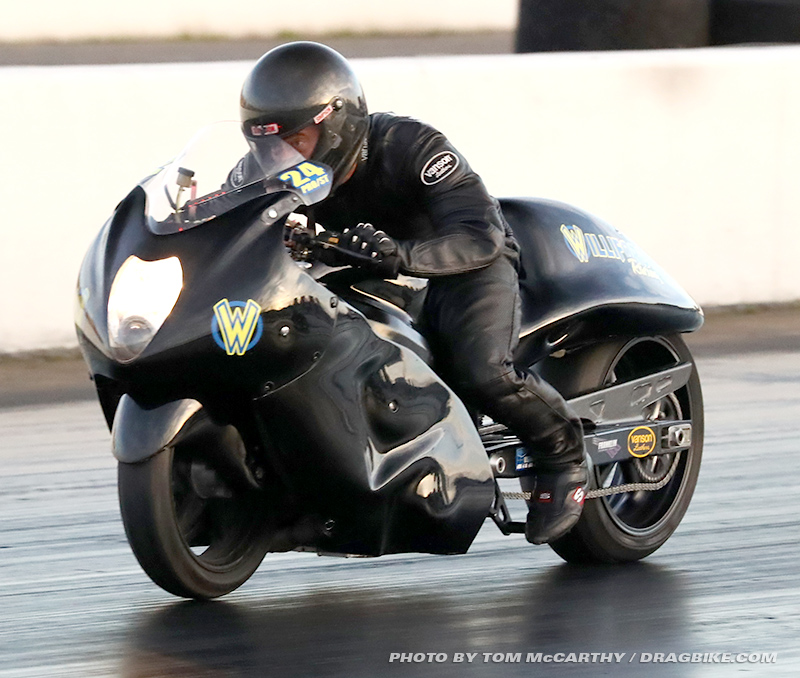 This was the first time OSCR invited in Pro Street motorcycle to mix it up at their event.  They were a huge hit with the racers, the fans, even event staff.  One of the ladies working in the tower mentioned to me, “I was talking to a friend of mine and when them Pro Street bikes rolled into the water I said, hey wait a minute, I gotta watch these guys.”  Event promoter Tyler Crossnoe in a post-race interview stated “We will definitely be inviting these bikes back again to this event next year.  They were just over the top.”

Qualifying sessions one, two, three in the books.

The Outlaw Street Car Reunion IV event, at Memphis International Raceway on Friday, 24 March, 2017, kicked off at 9:40am with race cars in 7.0 class rocketing down the 1320.  It would be some 12 hours later that the third and final round of qualifying for the day would be completed for Pro Street motorcycles.  Pro Street bikes made their last pass of the day at 9:38 PM, local time. 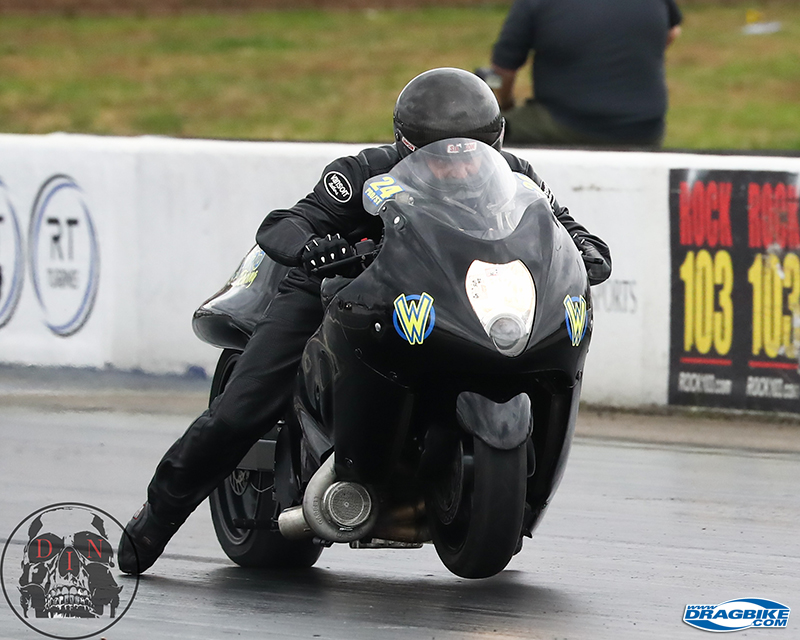 Friday’s qualifying sessions kicked off with much anticipation after record run type performance displayed by the motorcycles of Williford Racing during Thursday’s test session.  Rodney Williford (ET) and Ehren Litton (MPH) both ran test session numbers that could smash existing world records for the Pro Street motorcycle class IF conditions were right on race day.  But of course they weren’t. 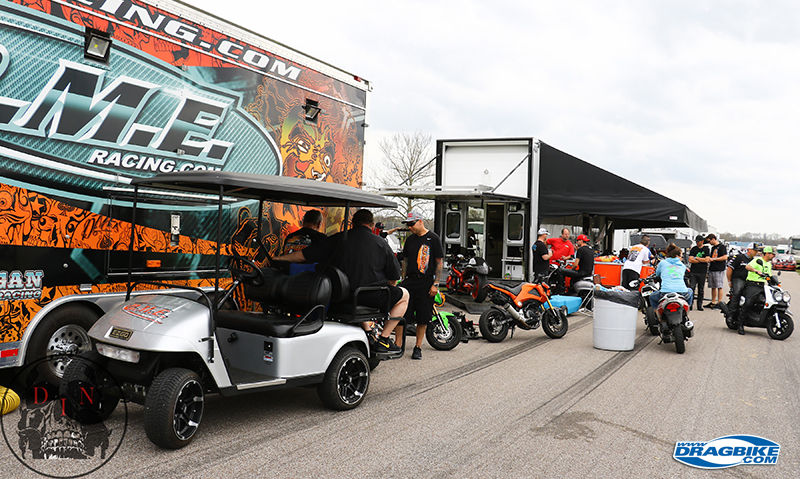 “We looked at the weather station on Friday morning and we saw we had twice as much humidity and double the water grains, from the day before.  Now I figured where I was fighting wheelie’s the whole way I needed to tame the bike down a bit so for first run on Friday, I left my Thursday tune up in the bike, knowing it would go fat a bit and that would take some power out, so the bike’s tendency to wheelie would be reduced.”  He was right, Rodney’s first pass off the trailer in Q-1 was a 6.82 @ 220.48 MPH.  He commented after the run, “The bike was definitely rich, which was intentional, but it was nearly a tenth slower before half-track, so we know what to do.”

That run turned out to be the best of the three qualifying runs on Friday.  On Q-3 Rodney was on a blistering run under the lights, but about 800’ down range the bike went into a wicked power-wheelie and he had to back out of it a great speed.  While his numbers didn’t improve for the day, many other racers did step up their game in a big way. 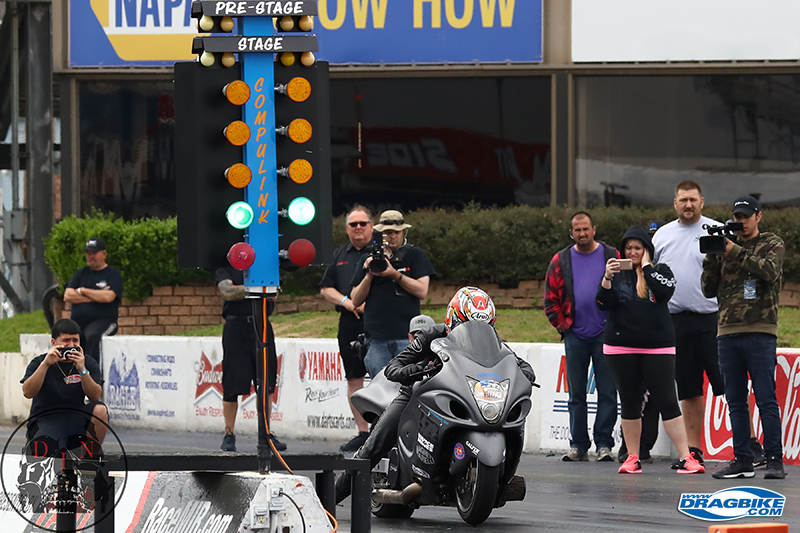 Justin Doucet hit his stride when he needed it most.  His 6.85 @ 214mph, good for the #2 spot on the first day of qualifying, was a personal best.  “When I heard what I ran, I was on the return road and I handed off my bike and said here:  Then I fell down in the grass like I was going to make like a Snow Angel or something, and I just lost it.  I can’t really tell you what that felt like for me.  That run was just a long time coming and I really needed that.” 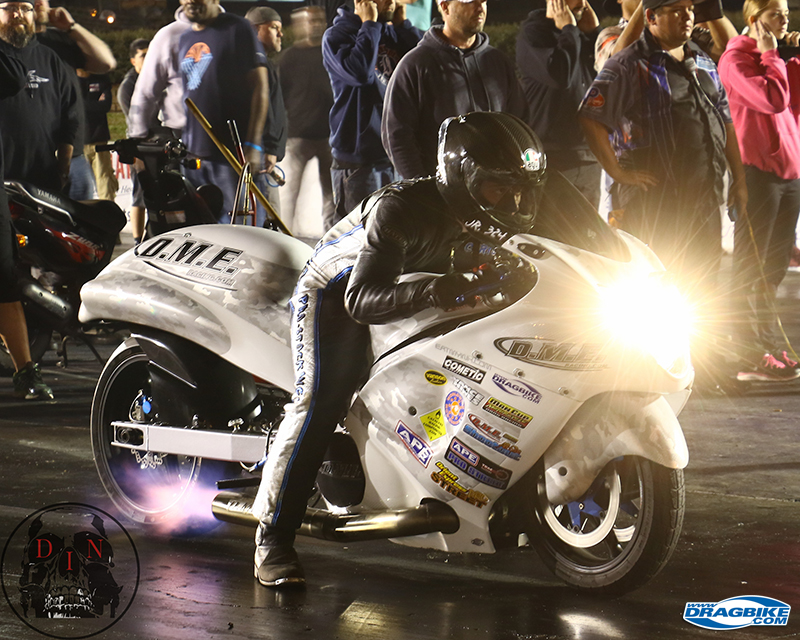 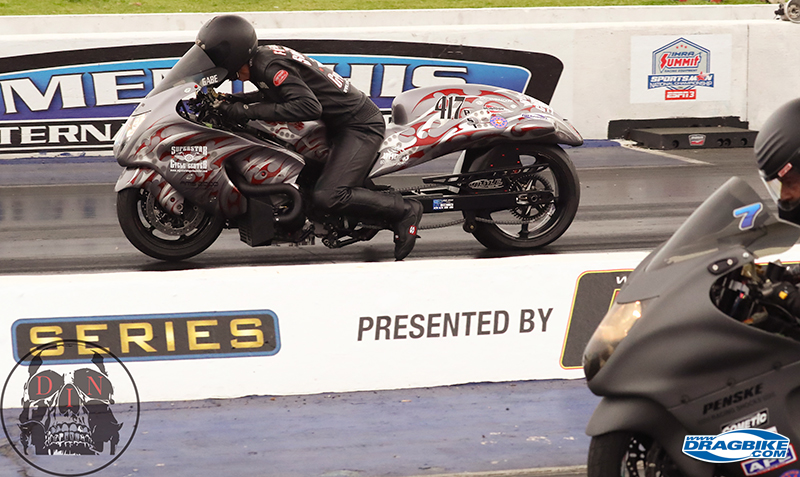 On Saturday morning with rain coming and going since the early morning hours, racing is on hold until further notice.  While the weather forecast for Saturday is dismal, the Sunday forecast looks great and Tyler Crossnoe, the event primary promoter, has vowed, “We will get this race in on Sunday, you can bet on that.” 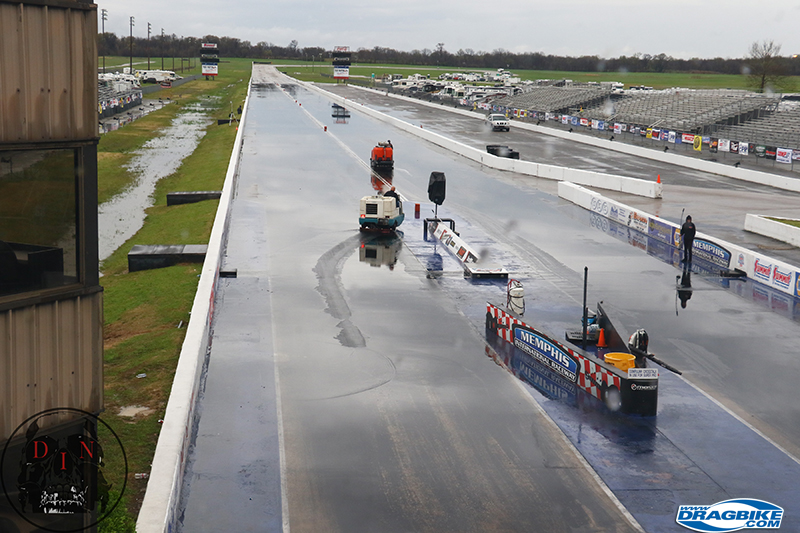 On Thursday, March 23, 2017, the Outlaw Street Car Reunion IV event kicked off with a full day of testing for all classes.  They also included some sportsman class racing for the 6.0 and 7.0 Index racing car classes.  The only motorcycle class racing at this big car drag/radial type event is the Pro Street class.  Event promoter Tyler Crossnoe decided in 2016 to add the Pro Street motorcycles to his event and he’s glad he did. 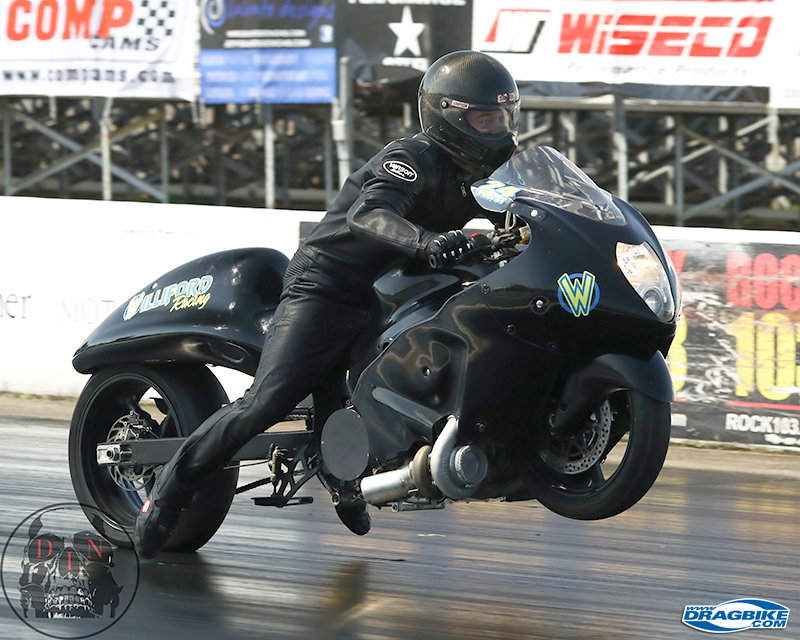 21 Pro Street bikes have officially entered as of Thursday, a test only day, and what a day of testing it’s been.  Fresh off the trailer, Rodney Williford unleashed a 6.69 @ 217 to start the tongues wagging then in T-2 he delivered a jaw dropping 6.68 @ 221.20 MPH.  For a while there he was the quickest and fastest bike on the property.  But that thought didn’t last long. 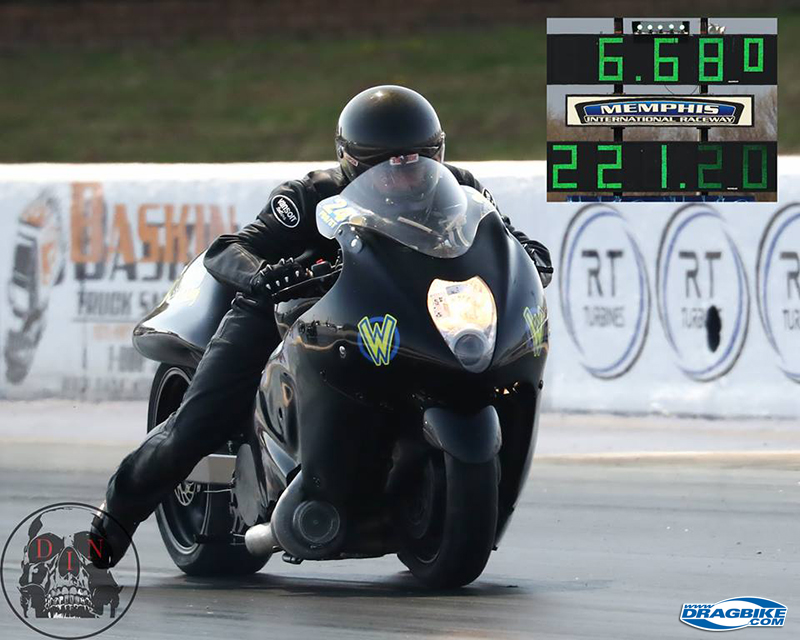 In the next test session, Rodney’s team mate, Ehren Litton delivered a 6.76 @ 223.10 MPH.  Coming into this event, according to the GOAT LIST, a 6.70 by Mark Paquette stands as the quickest ever run by a Pro Street motorcycle in competition, and that number still stands – this is a test day – practice only, remember?  And the highest official MPH run in competition is a 221 MPH blast, which also still officially stands.  But to see these numbers at the OSCR test session: Yikes!  Three days of official racing lie ahead, so be forewarned: there’s some serious heavy hitters here at the Outlaw Street Car Reunion IV event. 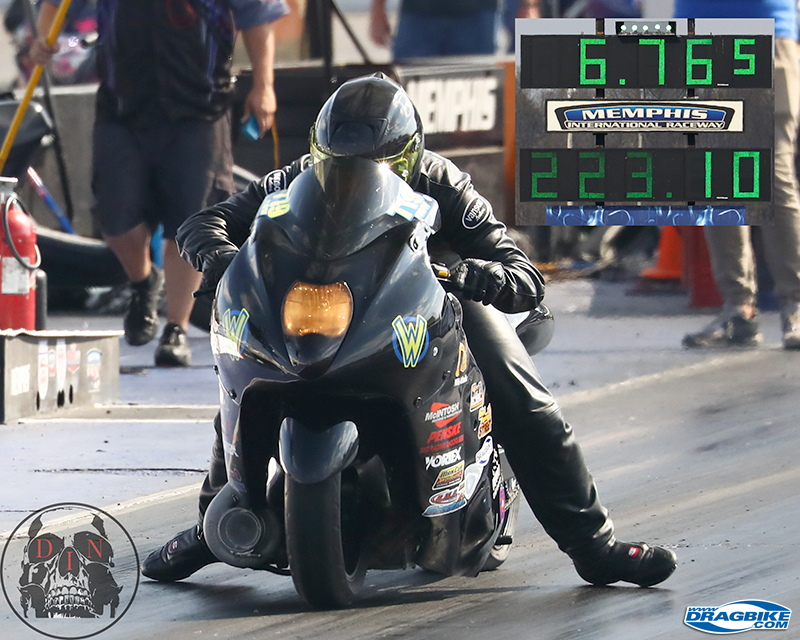 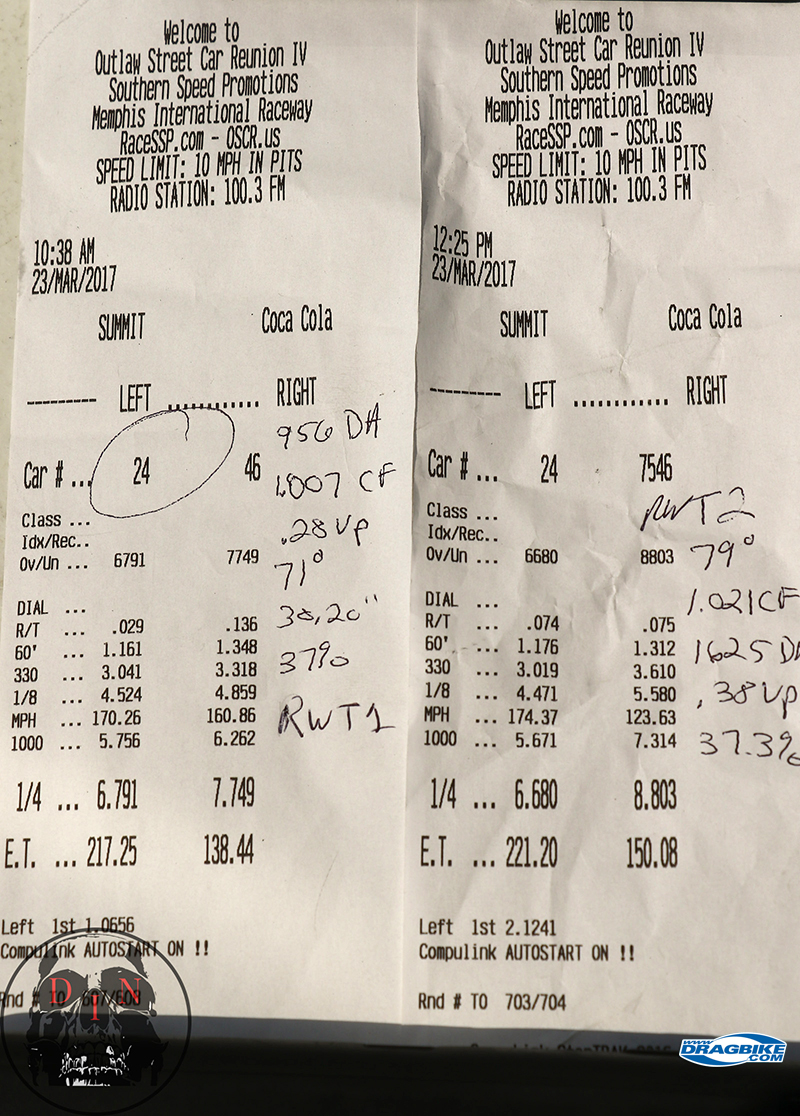 No official printed event list is published to confirm the motorcycle Pro Street entries.  But a hand review of the Tech Cards as of 5PM Thursday shows that the following have entered so far: 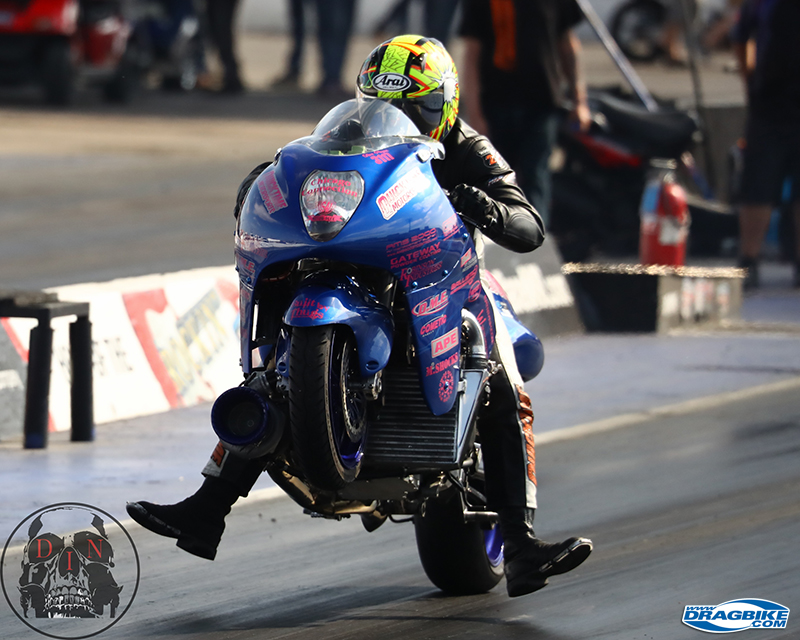 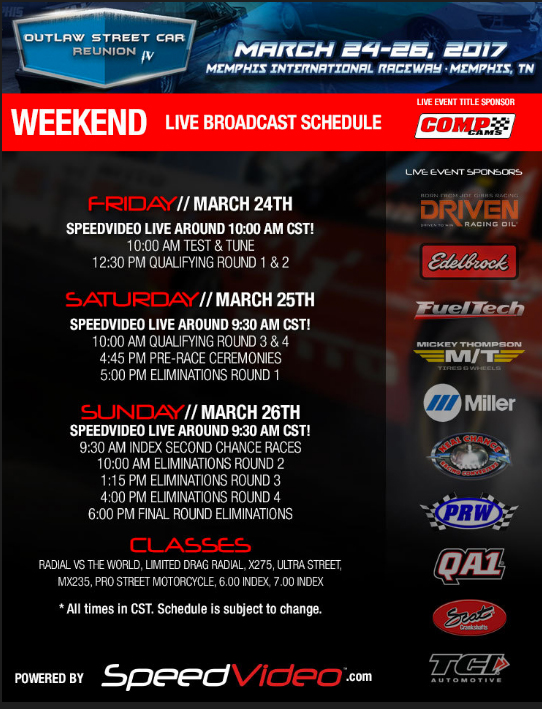