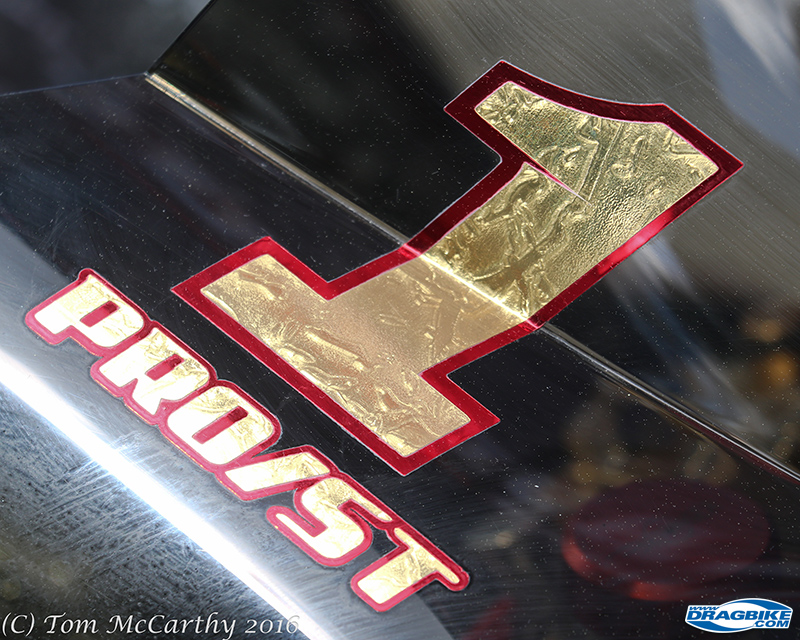 Seated in the staging lanes of the opening round of the 2015, MANCUP motorcycle drag racing season sits 24 year old Joey Gladstone, patiently awaiting his turn to race. He’s seated on his DME, Vance & Hines sponsored Pro Street bike with the # 1 painted in gold-leaf on the windshield proclaiming his earned place in the class. In fact he’s dominated it for three consecutive seasons now. He seems pensive in thought but he’s cordial to racers and fans who approach him prior to zipping up the Vanson Leathers. He doesn’t look threatening at all seated there all quiet and reserved, but on the track he’s a dominator. On the tree, he’s ruthless.

For example, on April 24th, when Gladstone made his first pass of the 2015 season at MIR, in Budds Creek Maryland, he comes off the trailer with a jaw dropping 6.76 @ 215mph. Good afternoon bitches. 6.90’s are the norm for the world’s quickest Pro Street bikes and a tad quicker when needed, but a 6.70’s elapsed time is just plain rude. Not much Joey’s opponents can do against this number except to become another one of his statistics. Let the curb-stomping commence. 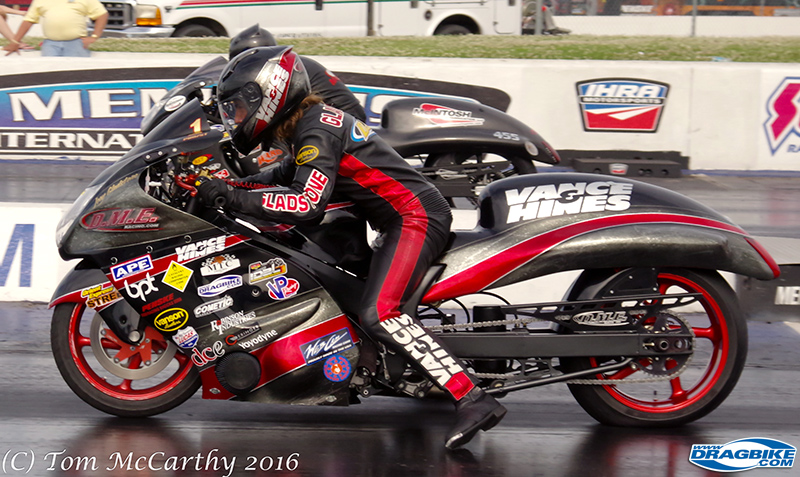 Joey Gladstone, for three seasons of racing now, has been regularly crushing his opponents in Pro Street motorcycle drag racing. Rightfully so, his opponents know, if Joey’s in the adjacent lane, they’re in trouble. And the trouble is spreading. Joey showed up in the class of Pro Open with a hybrid version of his DME prepared Pro Street bike at the MANCUP World Finals in 2014. He uncorked a 6.50 elapsed time for the quickest elapsed time in no-bar bike history at 227 MPH. This is doing the Gladstone Stomp.

So who is this Gladstone racer and where is this outrageous stomping of the competition coming from? The racing roots of Joey Gladstone are the inheritance of his family’s racing prowess. His father, Skip Gladstone has a ton to do with Joey’s success. 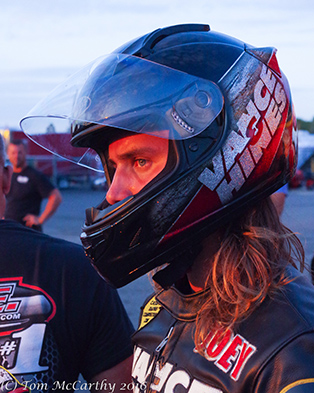 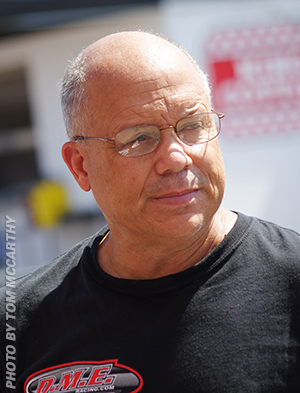 Make no mistake about it, Joey Gladstone is a Gladiator of the highest order, a truly gifted drag bike racer who’d die of boredom on an NHRA Pro Stock bike. He may only be mid-twenties in age, but he’s got ice water running through his veins like a seasoned combat veteran. His upbringing and his dad’s leadership have been major influences on Joey’s successful motorcycle drag racing career.

Joey’s dad, Skip Gladstone is the son of a Tool & Die maker with a love of all things precision and mechanical, which runs strong in the family. When Skip was a young boy, he had a natural curiosity for all things mechanical just like his father before him. This started off his mechanical education, learning to take apart and repair lawn mower engines, in the early 1950’s. Which is very impressive when you realize Skip Gladstone was born in 1951. The man was barely a toddler when he and his dad were taking apart lawnmower motors together. In grade school, when other children were using wooden building blocks to build puzzles with, Skip was learning about connecting rods and side valve motors.

Fast forward to a more modern era and at age 31, in 1980, Skip is working for Speed Research and Development in Pennsylvania. This man, who finds all things mechanical fascinating, finds himself but a stone’s throw from a shop in the same industrial complex as a famous drag racing enterprise, known to the drag racing world over as Jenkins Competition. Bill “Da Grump” Jenkins,” also known as “The Wizard of Malvern” as in Malvern, Pennsylvania, had his shop just a few doors down from SRD. It was only a matter of time before Skip got to know Grump and was hired to work at Jenkins Competition. 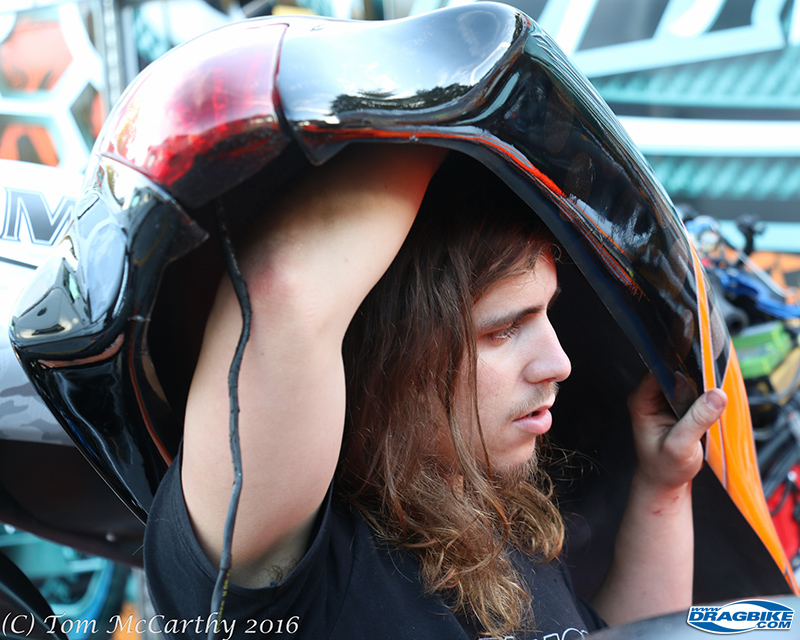 It’s important here to note the level of influence Bill Jenkins has had on drag racing engine development. In 2001, the National Hot Rod Association had a vote of the 50 greatest drag racers of all time and “Da Grump” was voted #8 amongst drag racing’s greatest. Bill Jenkins started drag racing early in the 1950’s and Grumpy only had 13 National event wins, yet the judges voted him Top Ten greatest of all time – why? Because, as it is stated by the NHRA in their memorial writings of Bill Jenkins, “No other individual has contributed more to the advancement of normally aspirated engines for drag racing competition than the legendary “Grump.” Every round of NHRA Pro Stock car drag racing for decades, you could find Bill Jenkins somewhere near the starting line with a little notebook in his hands taking notes about every pass of every car, every round. Bill “Grumpy” Jenkins knew more about making naturally aspirated motors go fast than Detroit’s finest engineers; that’s why they sometimes turned to him. It’s been whispered in quite circles, so too did some of NASCAR’s heavies.

It’s true that Skip Gladstone developed quite an education with internal combustion motors before he came to work at Da Grump’s shop. But he certainly attended an advanced school of higher education while working at Jenkins Competition while working beside Joe Tyson – one of the Grump’s most trusted engine builders. He has in fact learned from the best in the business about assembling gasoline burning motors for quarter mile drag racing. Skip remembers “One of the most important things Joe instilled in me was the importance of the routine. The methodical assembly in order, without exception, in sequence, of mechanical assemblies. There is no variation allowed to this procedure; ever.” This knowledge would pay dividends to Mr. Gladstone throughout the rest of his born days. 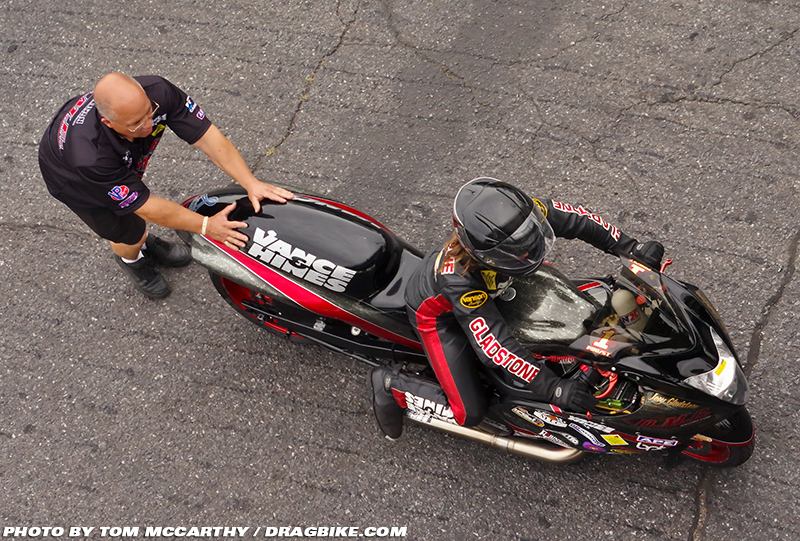 Skip became a drag racer himself in 1976 racing in the street ET class at the outset of his competition years. In 1998 he advanced to racing in the professional ranks of drag racing and as a family man, where ever dad went racing, so too did the family. In 1998, when Joey was seven, it was Joey in the grandstands watching dad’s opposition between rounds with a critical eye. Joey would then report to the pits to dad and tell him which racer liked which lane, who would try to deep-stage: in short, Joey became dad’s eyes on the competition. He was also getting an early education on how to read and defeat your competition by using their weaknesses against them. Welcome to advanced drag racing 101, know your enemy. This was pretty heady stuff for a kid not even in his teen years yet, but this is when the drag racing bug started to take hold of young Joey Gladstone.

In Joey’s earliest teen years, some of his friends had dirt bikes and they were ripping it up often. It wasn’t long before Joey took to two-wheels himself. He first learned to ride a motorcycle in 2003 and before long he was out in the dirt with his buddies. This became a critical part of Joey’s driving skills in drag racing as history has proven time and again that the best drag bike pilots are almost always former dirt bike racers. For example Larry McBride, Jim McClure and Tony Lang were all at one time devoted dirt bike racers.

His driving skills are vital to the success of DME Racing’s prepared Pro Street bike. The DME bike averages 6.90 elapsed times at around 210mph, without wheelie bars mind you, and has a valid D.O.T. street tire on the rear wheel. Yes the bike has basic engine and clutch data gathering accouterments, but it’s Joey’s seat-of-the-pants driver input that allows the team to fine tune the bike for maximum performance. It’s the little things in drag racing that win races and championships. 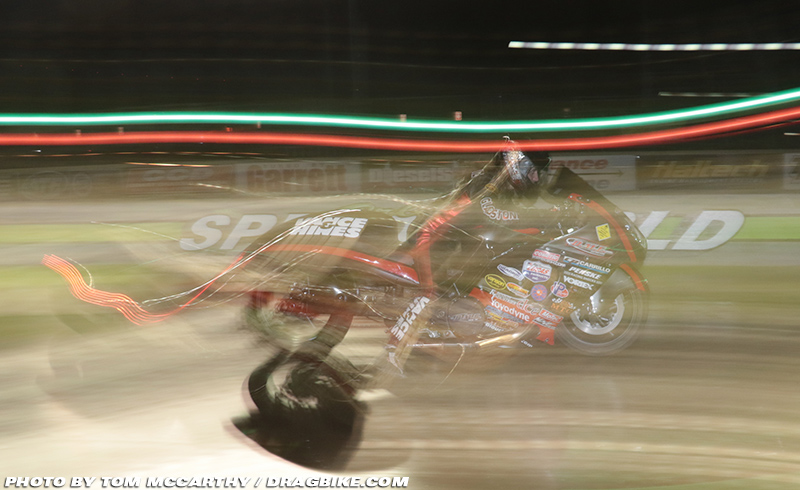 In 2015, the DME prepared Pro Street bike known as “Black Betty” with Joey driving had quite the season. In IDBL competition they were in the final round of racing in four out of five events for another #1 plate with the former MIROCK series (now International Drag Bike League). In MANCUP competition, Joey piloted Black Betty to their third consecutive #1 plate going to the final round of every race completed by MANCUP.

In 2016, the Gladstone’s, working once again for and with DME Racing, sponsored in part by Vance & Hines, are ready to rage again. They were testing their bikes well as customer’s bikes in February at Orlando Speedworld and it no secret they are out to dominate again this season. In April; Hell’s a come’n.