It was no surprise that when the Midwest’s largest motorcycle drag racing series—NHDRO—brought its high-horsepower, 2-wheeled road show to the St. Louis area’s Gateway Motorsports Park for June 3-5’s Motorcycle Madness, sparks would fly.

But heavy overnight and Saturday morning rainfall left rubber peeling off of Gateway’s quarter mile. No problem—nearby St. Charles Missouri-based Rudy Sanzottera jumped in with his Quicktime Motorsports teammates and the track crew to completely burn and scrape the track, and then re-prep before racing could start Saturday afternoon. 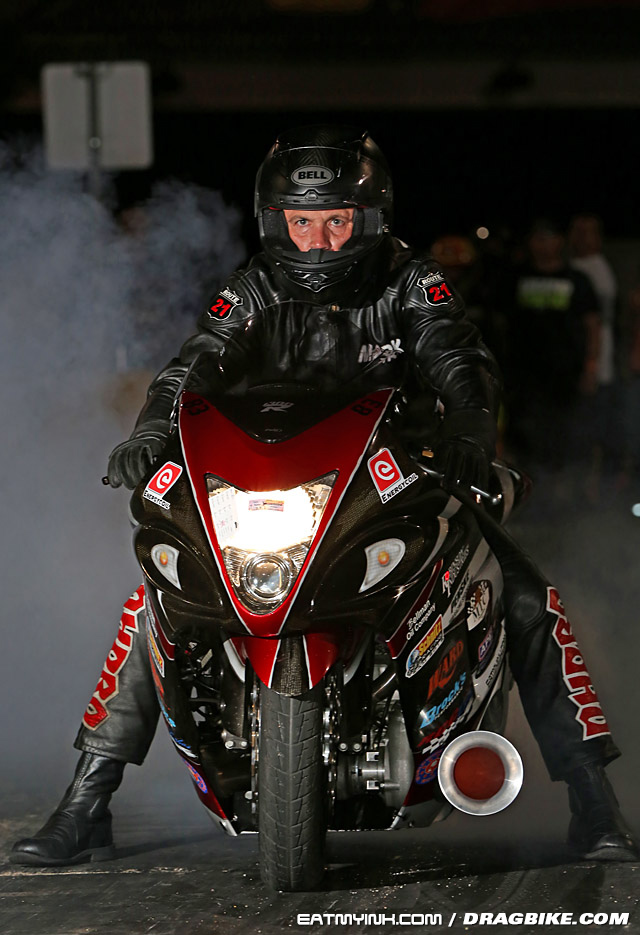 And it was worth it. Thanks to this effort, a firm foundation was laid for record-breaking action, courtesy of Indy winner Mark Paquette (who ran new NHDRO McIntosh Machine & Fabrication Pro Street records of 6.772 at 210.90 MPH at Indy). Paquette bumped those records to 6.769 and 214.28 mph in drastically changing weather conditions.

Saturday was brutally humid at swampy Gateway, but Sunday was a whole different ballgame—a strong cross-breeze pushing along dry, cooler air over a track that was really rubbering-in.

After qualifying number 1 with a 6.84 at 213 on his turbocharged Suzuki Hayabusa, Paquette faced Huntsville runner-up Justin Doucet in round 1 of eliminations. Doucet was struggling Saturday with a bad spin immediately off the starting line. He seemed to have it solved with a timing change while testing in the grudge session, but Sunday morning’s launch was pretty familiar and no match for Paquette—who leapt into the .70s with a 6.78 on a round 2 bye.

Paquette met Gabe Fredrick—who’s found 6.90 consistency—in the semis, but this time Frederick spun at the eighth mile. Not that 6.90 would have been good enough against Paquette’s 6.79. Hard-working Sanzottera fell to Paquette’s teammate Bud Yoder in the other semi.

Defending Pro Street champion Yoder is getting back up to speed after experimenting with his bike, but he’s not quite at Paquette’s pace. Yoder spun in second in the right lane while Paquette ran his best number of the weekend for the win in the left. 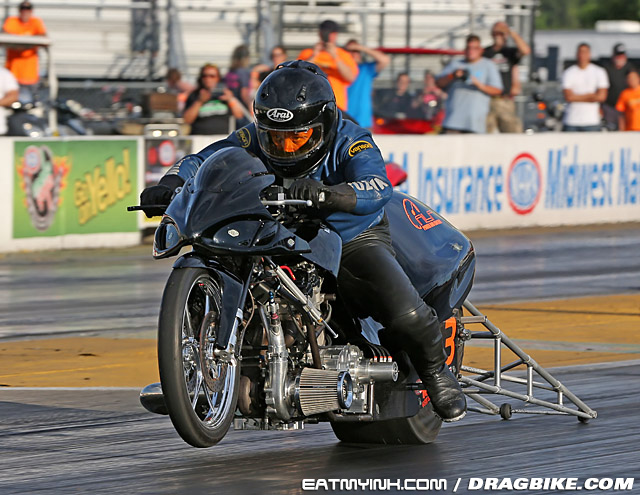 And speaking of comebacks, how about one that stretches all the way back to 2008 in Norwalk? That’s when and where Jeff Lindeman crashed his Pro Mod bike at an AMA/Dragbike race. Les Stimac won last year’s Quicktime Motorsports/Lindeman Performance Pro Ultra 4.60 championship on the same bike, with Lindeman throwing his leg over the machine in Louisville for the first time in 7 years. This year, Stimac has moved on and Lindeman is back riding fulltime in the world’s quickest two wheeled index class.

Lindeman has finally gotten the bike dialed in for his size (considerably taller than Stimac) and qualified number 1 at Gateway with a 4.618 in the eighth mile class. He faced a stiff challenge from Randy Butler, also running consistently at the number. But despite a commanding reaction time advantage, Butler broke out by .004 in the final and Lindeman scored the win. 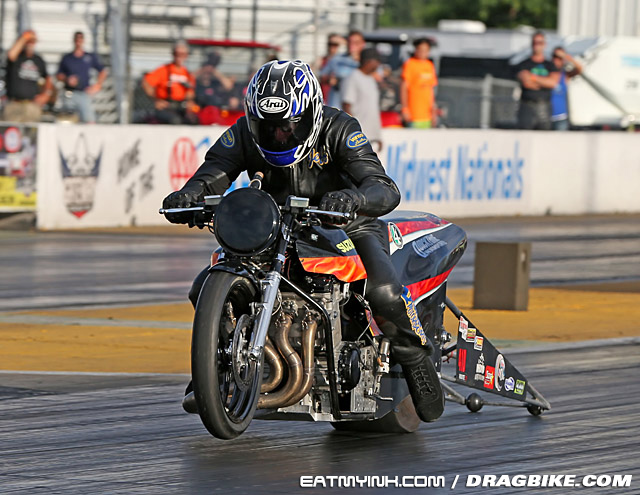 Was it a revolutionary changing of the guard or a fluke blip on the radar? Although the no-bar revolution is over 15 years old, one sportsman class has been staunchly protected by wheelie-bar racers—G&G Metal Spinners Top Gas. But when multi-time champ Greg Mallett gave up the finishline to Jeremy Teasley in the Gateway semis, the first ever all-no-bar bike Top Gas final was assured. 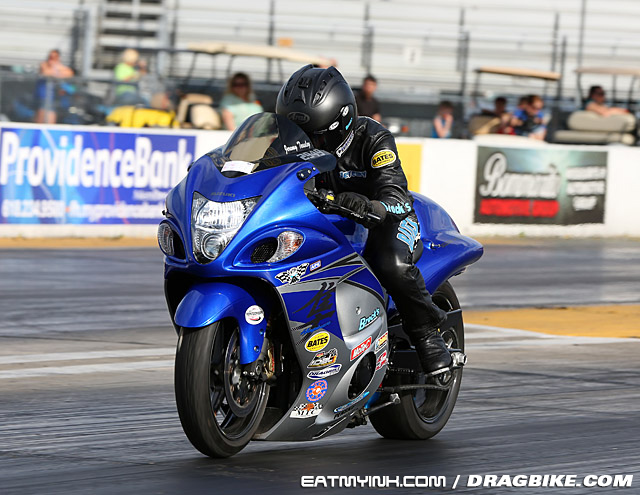 Ben “Race Hard, Crash Hard” Knight had the bye in the other Top Gas semi, and what was already a day filled with Gateway passion for the multi-class sportsman racer was about to ratchet up a notch. Knight went to grab a little brake at the finishline but the finishlline grabbed him, sending the popular racer hard into a slide and tumble. Bruised and battered, Knight was still able to drive his rig back to Ohio on Sunday night. 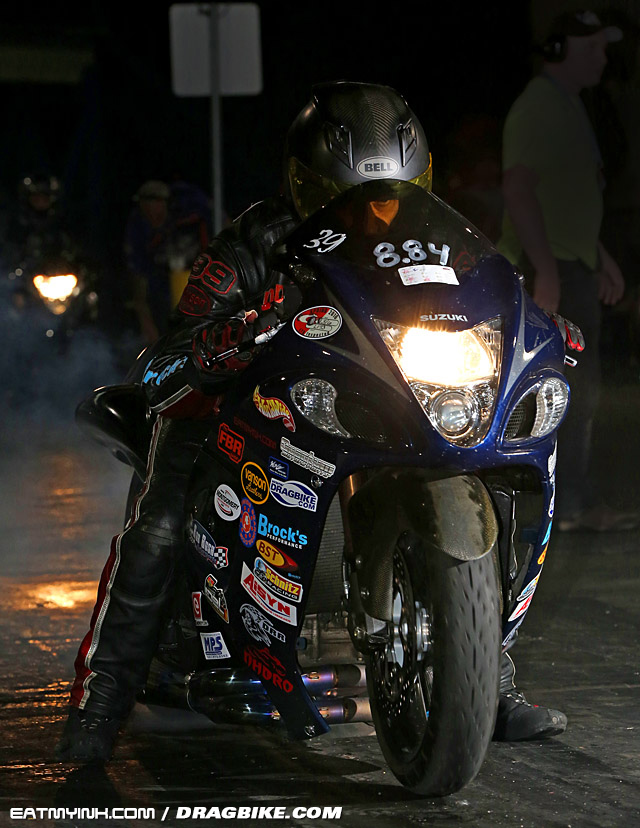 Teasley took the Top Gas win on his trick HTP Performance-built ‘Busa, and also Sunday’s Kevin Dennis Insurance Street ET win. That one came at the expense of Ron “Jiu-Jitsu” Arnold in the final, but Arnold beat Dustin “Bring Biscuits if I Crash” Lee in the Route 21 Street Fighter final. Street Fighter number 1 qualifier Nathan Hollingsworth lost to Dan Raduenz in round 2. 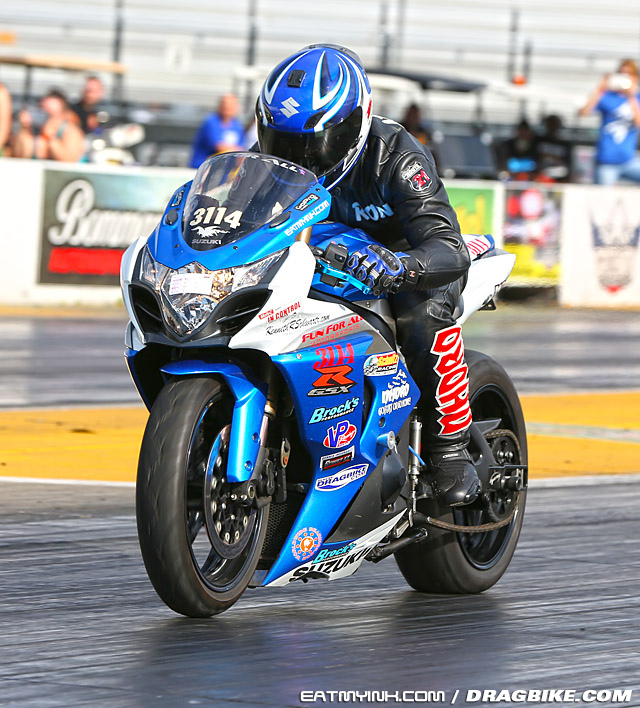 Arnold also runner-upped to John “Spooky” Markham in Millennium Trailers Super Comp after qualifying number 1 in the class. “Jiu-Jitsu” was .008 too quick off the line against “Spooky.” 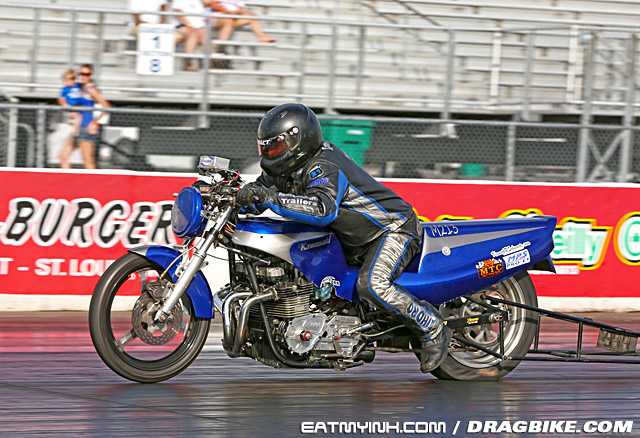 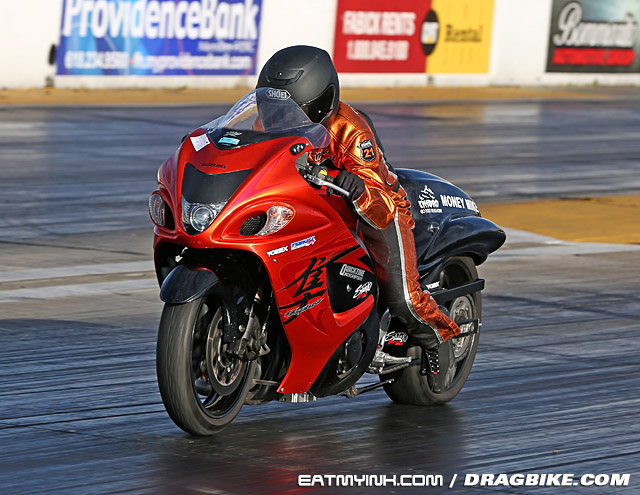 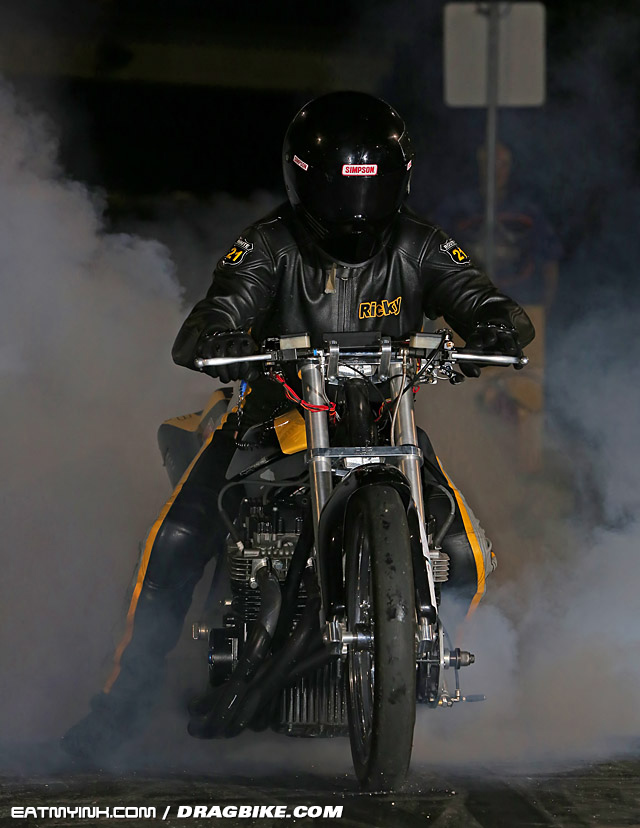 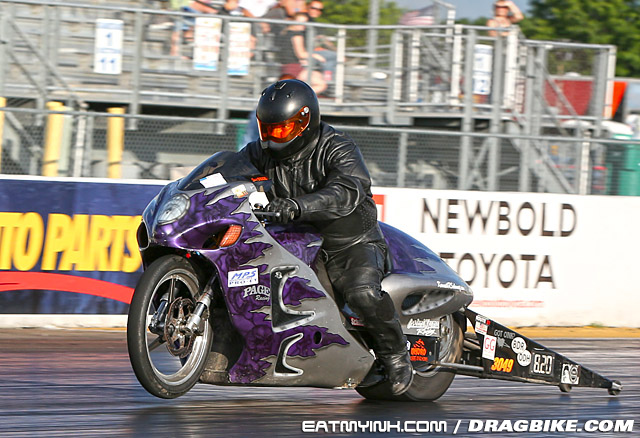 PR Factory Store and Vanson Leathers Grudge Racing ran deep into the night on Saturday, marked by a wild flip-over by Gateway racer Chuck Crawford. He was riding a ‘Busa with ‘90s details like a bead-lock rim and NOS bottle off the side. Crawford walked away. NHDRO’s own Brian Welch took a 2-stack win on the MSP-built “Uptown Funk” by half a wheel over “Canman.” 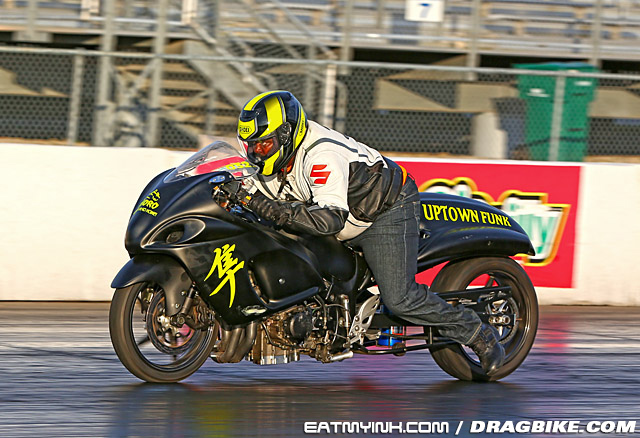 Brian and Niki Welch look forward to seeing the whole NHDRO family at Ohio Valley Raceway just outside of Louisville, Kentucky for “Grudge Reunion 2” on July 8-10.