With a career-best run in the final round, third-place qualifier Travis Davis earned his third PDRA Pro Extreme Motorcycle win after scoring twice in 2014, the inaugural year for the all-eighth-mile series.

Defending class champion Eric McKinney qualified first with a 3.996 run = at 178.78 mph aboard his 2012 Suzuki GS, while his teammate, Ashley Owens, started second, followed by Davis in third and Chuck Wilburn rounding out the top half of the eight-bike field.=20

All but McKinney survived the opening round of racing, with Davis easily defeating Canada’s Burke Foster before edging out Owens by 13-thousandths of a second in round two. Wilburn, meanwhile, beat Foster’s Canadian teammate Terry Schweigert, then sent Chris Garner-Jones packing from the semis.

“That was our first three-second pass and we’ve been trying to get that = for a couple of years, so for it to come in the final and get us the win here, well, we couldn’t have scripted it any better,” said Davis, from Douglas, GA. “It’s a big relief, too, to finally get back in the winner’s circle. We couldn’t be any happier right now.”

The next race on the 2017 PDRA tour is the PDRA Spring Nationals, May 18-20, at Darlington Dragway in Darlington, SC

The PDRA follows its amazing season kickoff with a stop at the GALOT Motorsports Park for the East Coast Nationals. This event is promising to be nothing but nonstop action that will feature lots of high-horsepower machines. The fans are going to be treated to several categories of Pro Mods, jet cars, and much more when the racing kicks off March 30 through April 1st. 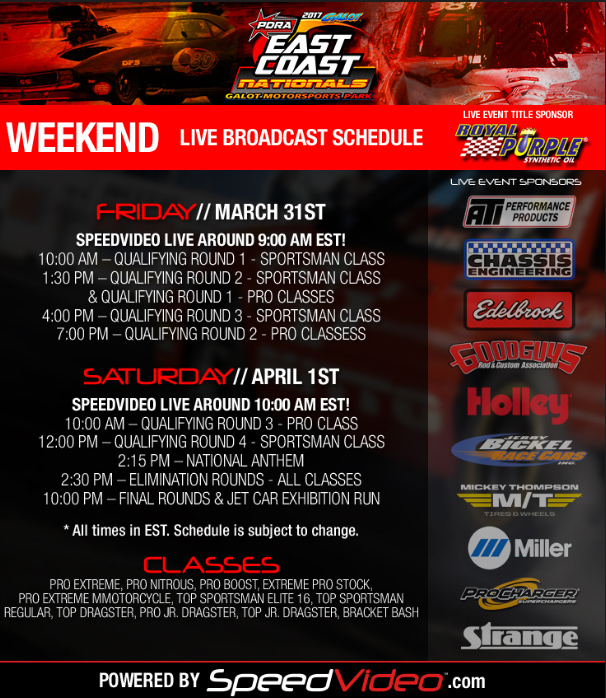