Past two-time class champion Eric McKinney was pretty pleased when he unloaded his 2012 Suzuki for pre-race testing at U.S. 131 Motorsports Park in Martin, MI, where it promptly ran 4.04 at 177 mph with the same tune-up still in it after winning the previous PDRA event a few weeks earlier at Memphis, TN. “Other than the most basic maintenance, changing the oil and plugs, we didn’t even touch the motor since Memphis,” McKinney said.

The tactic seemed sound, too, after McKinney led through the first two of three scheduled qualifying rounds with a 4.075 at 175.69 effort, but then Western Canada’s Terry Schweigert stepped up with a 4.072 at 172.28 in the final session.

“Man, I was bummed that we lost the number-one qualifier, but this definitely makes up for it,” McKinney declared, hoisting a PDRA Summer Drags trophy immediately after going 4.080 at 175.05 to defeat a red lighting Dave Norris in the final round. 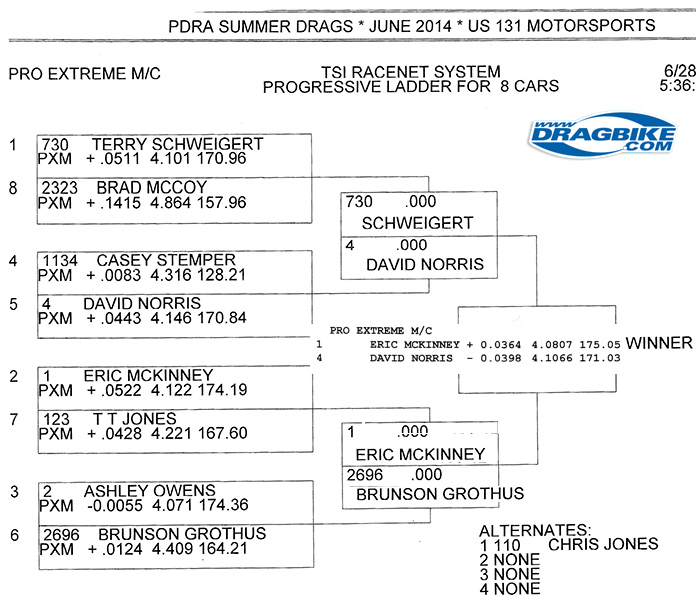 Two-time PDRA winner Eric McKinney thought his teammate, Ashley Owens, had surpassed the 4.075 at 175.69 he’d run with his 2012 Suzuki in the first round of Pro Extreme Motorcycle qualifying, but even after improving in his second attempt Owens fell one-thousandth of a second short.

“I’m surprised and I’m always happy to do well, but really I don’t care who’s number one or two as long as it’s both of us at the top of the list,” McKinney said. “Now we just have to stay there and then meet in the final round. That’s when I’m really going to care who’s faster–and I hope it’s me.”

Terry Schweigert and Casey Stemper were third and fourth, respectively, for what will be an eight-bike field for race day.