“With the weather we’re dealing with this evening and the forecast calling for a 95-percent chance of rain on Sunday, it’s just not possible to complete the event,” said PDRA race director Bob Harris. “Our rulebook requires us to be into the semifinals in order to push back the remainder of an event to the next race. Since we were unable to start eliminations this morning, it’s only right to cancel the event.”

All participants who qualified for the event will receive qualifying money, entry points and first-round points.

“We absolutely regret having to make this decision,” Harris continued. “It’s unprecedented in the four-year history of the PDRA; we’ve never had to completely cancel an event. All of the PDRA and Tulsa Raceway Park staff worked hard in attempting to dry the track, but the weather was just working against us.”

The next stop on the 2017 PDRA tour is PDRA Drag Wars, Sept. 7-9, at GALOT Motorsports Park in Benson, North Carolina.

Longtime Pro Extreme Motorcycle rider Terry Schweigert jumped to the top of the qualifying order during the second session, recording a 4.042 at 174.66 aboard his Canadian flag-themed ’12 Suzuki. The Abbottsford, BC, resident is chasing his first low qualifier award of the season.

“It’s a nice way to go to sleep, being No. 1,” Schweigert said. “We’ve been struggling a bit this year, so it’s nice to be on top for the day. We’re going to bed as the low qualifiers, but there’s one more round of qualifying tomorrow. I think it’s going to take lower than a 4.04 to hold the top spot by the time qualifying is over.”

Indy No. 1 qualifier Chris Garner-Jones tails Schweigert in second with his 4.047 at 173.27 on his T.T. Jones Racing ’15 Hayabusa. Three-time and defending world champion Eric McKinney isn’t far behind in third on his McKinney Motorsports entry with a 4.053 at 176.10.

This weekend marks the late-season return of the Professional Drag Racers Association (PDRA) to Osage Casino Tulsa Raceway Park for the PDRA Summer Nationals, Aug. 10-12. Despite challenging weather forecasts for the weekend, the all-eighth-mile series and its teams will move forward with the sixth of eight races on the 2017 PDRA Tour.

“It’s not just Tulsa being affected by these storms,” said PDRA race director Bob Harris. “It looks like the whole eastern U.S. is getting hit with these thunderstorms. We just feel like we’ll work around them. With the exception of the tropical storm we faced at Bradenton last year, we’ve never had to postpone a race due to rain in the four-year history of the PDRA. We have Sunday to fall back on as a rain date if we need to do that. We’re flexible and we’ll do everything we can to make this race happen.” 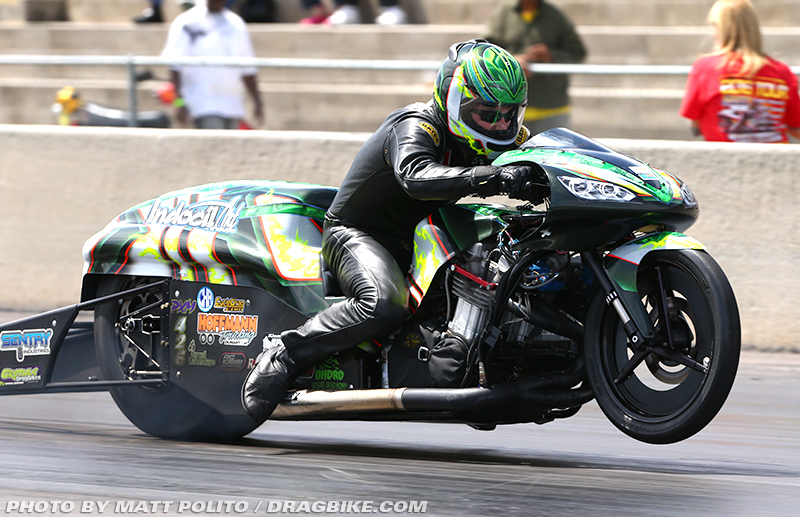 “Even with the forecast, I’m expecting a good car count,” Harris said. “Our competitors are diehard racers and they won’t let a little rain stop them from coming out and putting on a show. It’s Tuesday afternoon and we already have cars on the grounds here at Tulsa. With the combination of our touring regulars and local teams, I think we’ll have strong fields this weekend.”

A full day of testing for all PDRA competitors will take place on Thursday, July 13, from 11 a.m. until 9 p.m. Friday’s activities will begin with the driver’s meeting at 11 a.m., followed by Sportsman qualifying sessions at 12:30 p.m., 2 p.m., and 5:30 p.m. Professional qualifying is scheduled to begin at 3 p.m. A final qualifying session for sportsman (11 a.m.) and professional racers (1 p.m.) will set the fields for eliminations, set to begin at 4 p.m. for sportsman classes and 6 p.m. for professional categories.

SUNDAY Rain Date (Only If Needed)

If eliminations have started on Saturday and rains out it will continue the next day on Sunday.
If all rounds are completed up to the semi-finals, race will be completed at the next PDRA event during qualifying.