Person of the Week: Bradd Gott 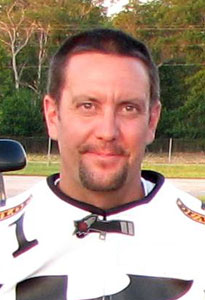 Born April 14, 1966 in Battle Ground, Indiana, Brad Gott began his racing career as a motocrosser. By the time he reached his thirties, he decided finding a safer form of motorcycle racing would be advisable. With his wife Mary and their three children, Samantha, Sevryn and Daemyn to support, being able to show up to work every Monday was a priority. Brad works for Tate & Lyle as a Process Technician. They’re the guys who make sweeteners like Splenda and sweeteners for Coke and other products.

In 1994 Brad’s friend, Art Carney (not from the Honeymooners), helped him make his transition from motocross to drag racing. Brad started racing an ’82 Suzuki GPZ1100 at Indianapolis Raceway Park, Muncie, and US41, along with a couple of Prostar events. After a hiatus of several years Brad started racing again locally on a GSXR750 and graduated to a Hayabusa. Brad’s most memorable day in racing was the first time he made it to the semi-finals at a local IRP event. He was lined up against his friend Ricky Smith. Ricky’s bike died when he put it on the two-step, so all Brad had to do was cruise down the track into his first final. He red lit. He didn’t say it was his fondest memory just his most memorable.

Today, both his daily ride and racer is a Ryan Schnitz tuned Kawasaki ZX14 that consistently runs 9.0’s. This past August, this bike also earned him his first class win in NHRA’s Super Pro Bike at O’Reilly Raceway Park (formerly IRP). This year he plans to run the motorcycle series at ORP in the Vance & Hines Super Pro Bike class and a new Street ET class sponsored by Del’s Performance. He will also attend the AMA Dragbike event at Indy and others as time allows.

When Brad’s not riding he enjoys time with the family, which includes fishing at his father’s, swimming, walking the dogs in the park, and working in the yard. He and Mary both relieve stress by running and working out.

Crew Members: Mary my wife, my two boys Sevryn and Daemyn and my friend Dale Sanders, who also plans on racing this spring.

Sponsors: Schnitz Racing and my wife!

Favorite foods: Has to be Buffalo chicken… no maybe STEAK…. Both

Hero: Has to be both My Grandfathers, they were both Great men.