Person of the Week: Cecil Towner 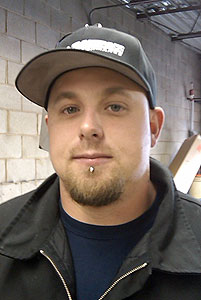 Born July 14, 1979 in Richmond, Virginia, Cecil Towner entered the AMA Dragbike scene back in the Prostar era as crewman for Jim Carroll in 2002. Both Cecil and Jim worked for team owner Sonny Fishpaw at his Kawasaki dealership. This was the year of Jim’s magical perfect season in Formula Superbike. The team qualified #1, set low ET, high MPH and won all eight national events plus the 2002 Formula Superbike Championship.

After Sonny sold his dealership, Cecil, Jim, and co-worker Lester Jenkins all started their own separate performance shops. Cecil’s shop, HTP Performance (which stands for Hard Target Penetrator), the name of a bomb used during his Navy days. Cecil quickly made a name for himself as “The Guy” when it came to setting up a bike. He has enjoyed a successful grudge-racing career with riders like Richard Gadson, Keith Thompson, and Norman Jackson. Richard Gadson, who made his first seven second pass aboard Cecil’s all motor Suzuki GSXR 1000 says, “Cecil is one of my best friends and I love riding for him.”

For 2009, Richard will be riding Cecil’s nitrous Pro Street Busa in the turbo-dominated class while at the same time doing double duty riding a Jerry Cooper Pro Mod Suzuki. Current MIROCK True Street Champion, Keith Thompson, will defend his title in what is now Real Street aboard Cecil’s GSXR 1000 in both the MIROCK and AMA series. Cecil says the 2008 MIROCK season finale was his most memorable event. It was a double-header event making up for a rainout, where Keith Thompson won both events locking up the championship. Rounding out the team will be Lavar Lewis aboard an ’08 Busa Real Street entry.

At the young age of 29, Cecil has quietly made a name for himself in this sport and will surely be one of the greats following in the footsteps of Coby Adams and Rob Muzzy who preceded him.