Person of the Week : Dan Parker

Chassis builder loses eyesight, but not vision for racing

For fabricator and past racer, Dan Parker, his dreams, goals and everyday life changed permanently on March 31, 2012, when a horrible accident left lasting injuries that would change his life forever.

Parker’s most significant injury sustained during the crash, but not realized until more than two weeks later after he awoke from a medically-induced coma, was the complete loss of his eyesight. In addition,¬¬ he sustained severe injuries to his right arm, a broken tailbone and crushed vertebrae in his back.

“My right arm has pins between the elbow and shoulder, and they basically had to put my elbow back together. When the wreck snatched the motor out, the transmission came into car and crushed my arm and wrist. When I got out of the hospital, my right arm could not bend at all. I had to not only adapt to being blind but had to adapt to being left-handed, too. But after multiple surgeries and months and months of therapy, I have 75-80 percent usage of my right arm now,” Parker said. 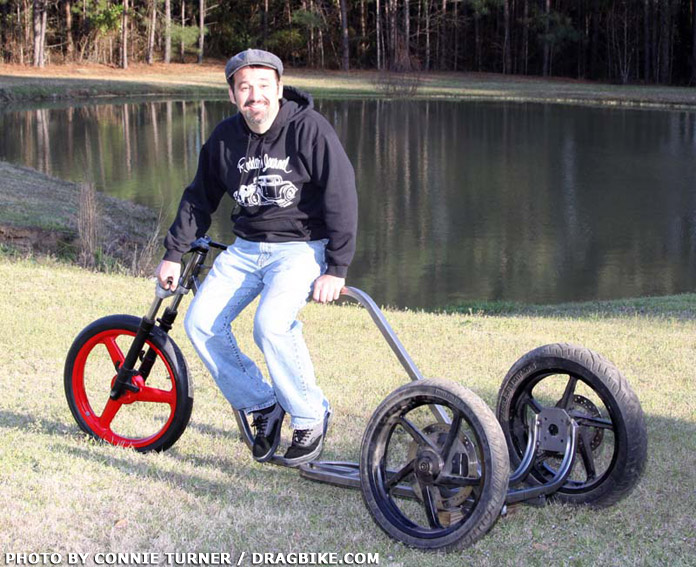 Dan Parker is shown with the custom trike chassis that he built and plans to drive on the Bonneville Salt Flats in Utah as the first blind man to ever accomplish this feat.

The consequences of that day nearly one year ago would not diminish Parker’s aspirations, but instead would end up fueling them into something much greater – a chance to become the world’s first blind man to compete on the Bonneville Salt Flats.

Parker, the 2005 ADRL Pro Nitrous World Champion, grew up around racing and the complex fabrication process behind the sport. He followed in his father, Jimmy’s, footsteps as a racer and fabricator, eventually opening up his own Parker Chassis in Salem, Ala.

Over the years, Parker made a name for himself as a go-to source for information on chassis design and tuning. He was also the crew chief for Pro Stock Motorcycle driver Anne Hansen at the 2012 NHRA Gatornationals only weeks before his accident.

Parker was contracted by Star Racing to build two ADRL Pro Extreme motorcycle chassis. Japel Heard won the 2012 ADRL Bristol event on one of these motorcycles and the other is currently being raced in ADRL by Jay Fisher. The three Star Racing-built “Drag Bagger” motorcycles that are still raced all over the world also included chassis built by Parker.
Parker had dreamed of building a Bonneville car for years, and after his accident he decided that the perfect way to move forward with the next chapter of his life would be to build and drive his own vehicle on the Utah salt flats. 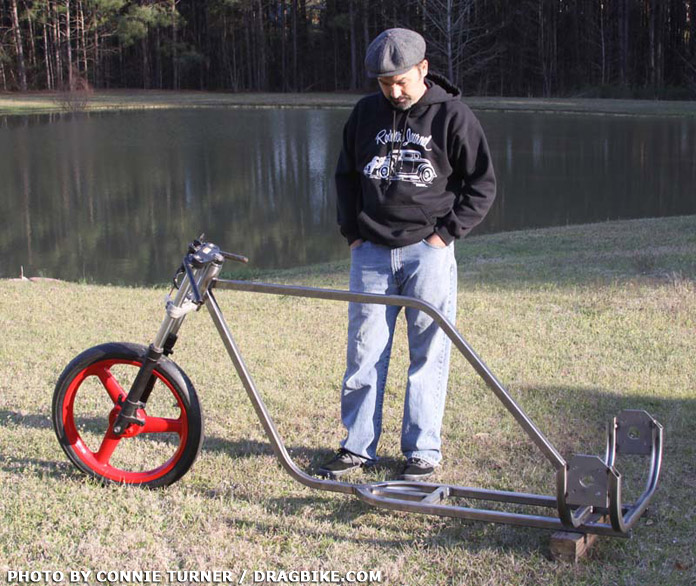 “After my accident, I still had the passion and needed a goal to work for. I needed to keep my mind busy. Since then, I’ve just been trying to learn how to adapt to using my machinery again and using the knowledge that I had in the past and apply it to the next chapter in my life as something else to keep me going,” Parker said.

Instead of taking a car to Bonneville, Parker decided his best option would be a 50 cc trike that he could run in the BUB Motorcycle Speed Trials, a motorcycle-only event in August.
“I knew that 50 cc was the smallest, slowest combination that I could run. I chose that so I would have the most luck for the Bonneville committee to approve me. They have to approve my safety and guidance system before allowing me to run,” Parker said.

He began his Bonneville project with a stock 1999 Aprilia RS50, keeping only the front forks and engine from the motorcycle. Parker designed the new frame for the bike in his head and did 80 percent of the fabrication work himself.

“There are videos on my Facebook page of me doing work myself. That’s one thing that has kept me busy. I didn’t tell someone what to do and they handed me a finished product; I was involved in the whole process. The whole frame I designed in my head and a friend of mine, Sam Perry, came from Mississippi and helped me finish it up. I had most all the tubes and everything ready to go when he got here to help me put it all together,” Parker said. 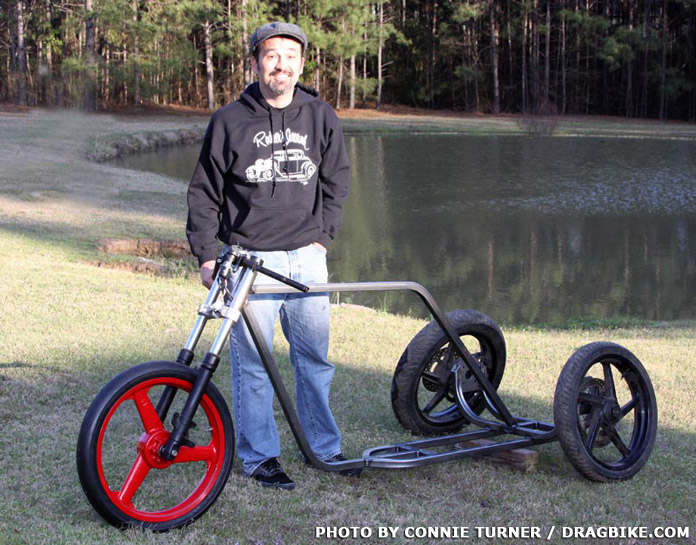 One of the most significant contributions to his project is the impressive guidance system being designed specifically for Parker by his longtime friends Allen Dudley and Patrick Johnson, owners of MFI Electronics in Huntsville, Ala.

This system will plot the Bonneville course using high grade GPS and will help Parker steer the vehicle by giving audible commands if he veers off course. There are also a number of other safety features in place so that the bike will automatically shut off once it crosses the finish line or if it veers off of the course at any point during the run. The Bonneville race officials will also have a remote shutoff for the vehicle in addition to their two-way communication with Parker at all times during the runs.

To Parker, the speed is not nearly as important as the experience itself. 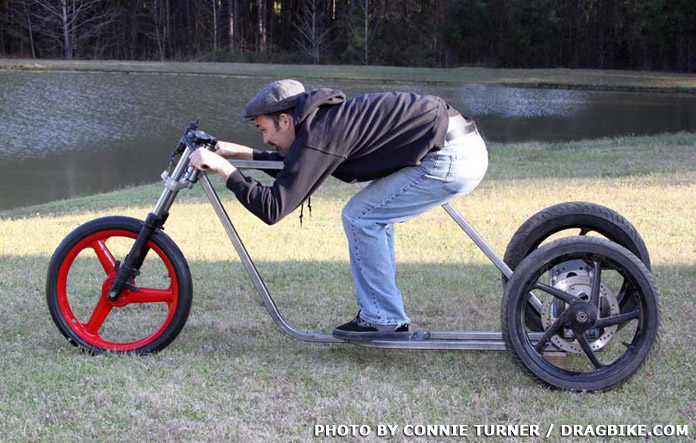 “I’m shooting for 75 mph, but the main thing I want to do is to be the first blind man to run the Bonneville Salt Flats,” Parker said.

In order to be ready in time for the August event, Parker plans to have the bike finished by the first or middle part of June and test it out during July. He wants to get comfortable on the motorcycle and have everything prepared to run by the first of August.

After a 30-year friendship with Dan and his family, Star Racing owner George Bryce wanted to help in this process in any way possible, signing on as a major sponsor for the project.
“All through the years, Dan has always helped me anytime I had a question or anyone at our shop had a question. We would call him and he was always quick to help. He has been more than just a friend; he’s been a partner of sorts in lots of projects over the years.

“If our roles were reversed, I know that he would go out of his way to give me anything I needed. So, given our relationship and our position in the same industry, it makes perfect sense for Star Racing to be involved in a way that we can help Dan make his dream come true,” Bryce said.

Even for a company that receives frequent requests for sponsorship funding, it was a no-brainer for Star Racing to offer support for Parker’s Bonneville project.

“We get requests for sponsorship daily – e-mails, texts, Facebook messages – but with Dan, I was the one who called him and asked if we could be a sponsor as a small way to thank him for all he’s done for us. We want to help him get the parts he needs, give him testing capabilities using our dynos, get him to Bonneville and back safely, and whatever else he needs from us,” Bryce said.

The accident that initiated this new chapter in Parker’s life began as a routine test session at Alabama International Raceway in Steele, Ala., where he was driving Bill George’s nitrous-injected 1963 Corvette. At the finish line of his otherwise perfect eighth-mile pass, the car took a sharp right at 175 mph, careening head-first with the concrete barrier wall and continued barrel rolling until everything from the firewall forward was ripped away from the car and strewn about the shutdown area.

Parker was rushed to the hospital where he spent the next two weeks in a medically-induced coma while the doctors worked to treat his injuries. It was not until he began to come out of this coma that his loved ones and doctors realized his eyesight was also gone.

After several surgeries and a great deal of physical therapy, Parker has managed to get back to doing what he loves less than a year after his accident. His new Bonneville project is sure to challenge and encourage him on his new journey.