Person of the Week: Dave Page

Born July 13, 1959 in Norwood, Ohio, Dave Page is one of those fortunate people who have lived their whole life in the same small community. And when the community is only three square miles in size, that’s pretty impressive. Even Matt Polito moved away from Franklin Avenue in Nutley, New Jersey to California. That makes Dave’s bond with home even more rare. 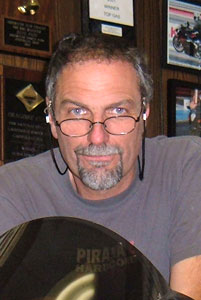 Dave’s racing career started on a very small scale. Slot cars to be exact. At the age of 13, his older sister, Linda, taught him how to ride motorcycles. By the end of the 70’s, Dave was racing motorcycles at Thornhill Dragstripe in Morning View, Kentucky. A town known for drag racing and fishing – yes, fishing. This is a small track with a rich history. Even Elmer Trett raced at Thornhill back in the day. When you hear the word “clocks” used to refer to the timing system at the track, this track truly had clocks as opposed to a christmas tree. Your dial-in was set on the clock in your lane and when the big hand reached the 12 o’clock position, you took off. If you left too soon the face of the clock turned red, if you left on time the face turned green.

One of Dave’s inspirations from Thornhill is legendary Bob Davis who piloted a triple engine Kawasaki Top Fuel bike in the 70’s. Bob’s bike was used as a promotional tool in the early 90’s by AMA/Prostar and proudly served the sport in the AMA Motorcycle Museum in Westerville, Ohio. Bob once told Dave, “What you lacked in ability, you make up for in persistence.”

I guess you could say persistence is a good word for Dave. He scored national event wins with the original AMA Dragbike Series starting in 1988, winning the Edgewater Park and Gainesville events. Dave also had numerous wins with IDBA from 1987 through 2001. Dave has competed at nearly every single Prostar and AMA Dragbike event since its beginning and finally won in Top Gas in 2007. He has earned nearly every top ten plate in all Sportsman index classes except the elusive number one plate. He’s just being persistent – it will come.

As a former auto mechanic, Dave’s break came with the birth of the Hayabusa. He started his own successful motorcycle business just after the turn of the century with $3,000 cash. Dave was one of the first to build a Hayabusa dragbike with the help of Rob Bush, Billy Robinson, and Dave Schnitz. In 2005, he received the Prostar Sportsman Mechanic of the Year honors for his Hayabusa advancements.

Dave’s goal this year is to win a national event on a streetbike in either Street ET or Street Fighter.

Daily driver: A rusted blue Chevy pick up with 225,000 miles