Person of the Week: Debbie Knebel

Born December 4, 1954 in Greenville, South Carolina, Debbie Knebel was not a person born to be a motorcycle racer, yet alone become one of the sport’s most recognized faces. Debbie’s dream from childhood was that of a future horseman, a dream that was fulfilled before horsepower became her destination. 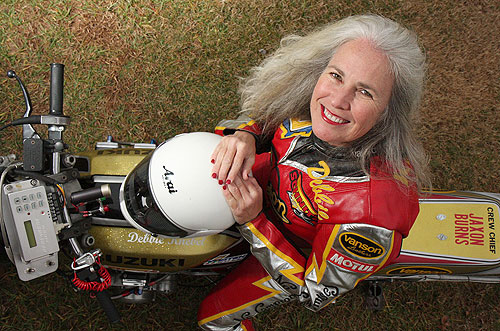 The latest and largest displacement bike for her to compete on was at this year’s opening AMA Dragbike round in Valdosta, GA. Rickey Gadson sponsored Debbie with one of his school bikes, a Kawasaki ZX14 that runs on pump gas. Her best time for the weekend was a 9.30, which isn’t too shabby for a near stock bike. More practice will bring that time down. Rickey has run 8.80’s on the same bike. Debbie said it was a very easy bike to maintain and includes an on-board air compressor eliminating the need of a crew person. She absolutely loved it.

Before I go on to tell the rest of the story of Debbie Knebel, I would first like to say that I will break from my normal writing style (or let’s say overextend it) to properly tell this story. Many of you by now may have figured out who I am, but if not, it’s not important. The POTW stories are all about the people who make up this great sport of motorcycle drag racing. The story about Debbie is special to my family and me. When Dave Schnitz asked me to create the Person of the Week column for Dragbike.com, one of the first names that came to mind was Debbie. So I was delighted when Dave picked her for this week’s personality.

Debbie is 54 years old, yet in the prime of her life. Her husband, Pat Jones introduced Debbie to the sport, as you will read below. Pat himself will be a feature in the future, for he is one of the sports icons in his own right. Together they pour everything they have into the sport they love. As Debbie told me, “It’s all about the people, our extended family, that keeps us coming back. We truly love everyone involved in the sport.”

For those who know Debbie, this story is not about her being an accomplished racer, or the testimony of two people who literally scrape every penny together just to be at the next race. This is a story about faith. Years from now, when Debbie passes from this life to the next, she doesn’t want to be remembered as a horseman or drag racer. She first and foremost wants to be remembered as a Christian. As much as she would cherish winning an AMA Dragbike national championship, her ultimate goal is to one day reach the pearly gates and hear the words, “Well done, good and faithful servant,” spoke from the mouth of God himself. It is her task of being a living, walking, and even riding witness for our Lord and Savior, Jesus Christ, that brings Debbie to the races. That – is who Debbie Knebel is.

As an accomplished writer herself, I have chosen to let Debbie tell her own story through the answers to my questionnaire. When a person is selected as a POTW, I send out an email congratulating them and ask them to fill out a simple form. Debbie’s reply was four pages long. I think hearing a portion of her reply is best told in her own words. Keep up the good work Debbie; I think you are already a saint.

How did life start for you? What was the basic story of your life leading up to when you first raced motorcycles?
My dream growing up was to have horses. I ate, slept and dreamed of horses. Motorcycles were the farthest things from my mind and not until I was about 12 did I know anyone that had a motorcycle and I was not allowed to ride them! I lived my dream of having horses and bred 2 foals that are now 22 and 20 years old. My first real introduction to motorcycles came with Pat when I was in my 30’s. I took the Motorcycle Safety Foundation course in 1992 when I was 38. In 1994 we went to the local dragstrip to watch. I had been fearful of Pat’s drag racing, but once I saw it, I thought, “ I could do that.” Two days later we returned to watch and the lady at the gate convinced me that we should both enter. I didn’t want to make a fool of myself in front of these people, but Pat said, “Do you really think you know anyone here?” I then asked how many girls would be in the ladies class-“None”- because there wasn’t a ladies class! All along the sweet little lady insisted, “Honey, you’ll do just fine.” The rest is history. I couldn’t find enough time; money or tracks open to satisfy the challenge.

What year did you start racing or being involved in racing?
1994 – Greer Dragway, Greer, SC
Raced all events AMA Prostar, finishing in the top ten in at least one class each year and have always won at least one round at every event since 1998, with one exception, the Canada race, which we were unable to attend.

History of racing bikes and classes?
Started riding in June, 1992. Greer Dragway June 1994 on Honda Hawk and raced it for two years. Ran NHRA Bracket program with Atlanta Dragway in 1995-1998 – 3rd in 1995, 1st in 1996 & 1997 and lost first by one round in 1998 while attending all Prostar events and missing 4 NHRA events. In 1996 started racing Suzuki GS1150, first at Atlanta Dragway with limited Prostar events. In 1998 started running all Prostar events on both bikes….previously had only attended limited events in Atlanta, Montgomery and Rockingham. Finished 4th in Pro ET first year.

Current race bike / class?
Honda Hawk – Street ET – although Rickey Gadson brought one of his ZX-14 drag racing school bikes to So. Ga. and I raced it in Street ET and Street Fighter, learning a totally new bike and lost breaking out in the second round. Suzuki GS1150 “Fish” bike competes in Pro ET and Super Comp.

Goals: To enjoy life, encouraging others to live each day to it’s fullest while bringing social responsibility to those around us. To promote safety and to allow my love of the Lord to show through me in what I do, hopefully leading someone else to a happier and more productive life.

Occupation: Internet sales with Amazon and Ebay – Writer for Straightliner

Interest outside of racing: My relationship with God and my family, horses, fishing, photography and gardening.

Favorite movies: Gone with the Wind and Wizard of Oz

Daily driver: OK, start laughing, a Lincoln Towncar that I inherited and our Mazda Miata.

Do you own a classic car or truck? Hmmmm, does an unrestored 1969 Grand Prix sitting on concrete blocks count?

Heroes: My heroes are all the good people in the racing community who have helped in so many ways to keep us racing……parts here, gas there, a price break on a part we really need…..we are poor in cash flow, but wealthy in help from our friends….I cannot thank them enough…..