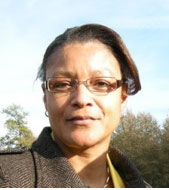 Born August 14, 1965 in Elberton, Georgia, Gladys White grew up in a small town with little to do. Like a lot of us she spent her weekends at the local skating rink which she says ironically became her first job. Her childhood memories recall her dad riding his motorcycle while her mother indulged herself with her sewing. Gladys grew up managing to make her parents pastimes her own.

Gladys’ first car was a 1971 Mustang which she thought was really fast because the spring-loaded antenna would lay down as she drove fast. She always thought motorcycles were cool but she was never allowed to ride with Daddy, Mom’s rule. It wasn’t until she was in her early thirties that she purchased her first motorcycle. Even though she was a grown woman, she was still timid to tell her father that she had purchased a motorcycle. To break the news to him, she simply said, “Guess what I did?” His answer was, “bought a motorcycle.” Discovering that he was okay with the fact, she bought two more.

The last bike Gladys rode on the street was a Suzuki TL1000. By this time in her life Gladys had become a police officer in Greenville, South Carolina and rode her bike often with other officers. One day one of the officers suggested a group of them ride to the track in Greer, SC. Gladys was fascinated but vowed she would never do that. One night she rode over to Pageland Dragstrip in Pageland, SC just to check out her local track. This is where she met the love of her life, John Loney, and soon was recruited as a crewmember, as most girlfriends and spouses are. She did the crew bit for a about one year then decided that if she was going to be at the track she might as well race. In 2006 John set her up with his GSXR1100 for her first drag bike. 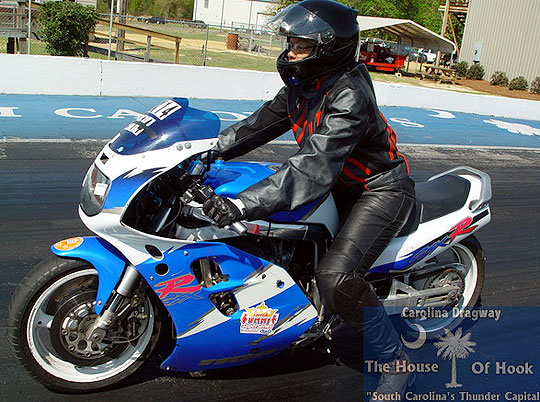 Gladys said John lives for drag racing and took her racing very serious. On the night she started racing, John went through every step of racing with Gladys. He started with the basics explaining reaction time, elapse time, 60ft and everything in between. It is amazing how much there is to learn and what happens in the first sixty feet of a race. Only drag racers would understand. It all looks so easy from the stands but until you put yourself on the track, you will never know the dozens of things you have to do in the first 60 feet. Add a slider, nitrous, turbo or dozens of other performance products and it gets exponentially more difficult.

She raced the GSXR for a year and a half until her sponsor, Harry Cooper, gave her a real drag bike to race to race, a GPZ900. This time John did not want her first time on the bike to be on track experience so he took her to Harry’s shop to go through the motions of riding a drag bike prior to taking her to the track. She said her first run on the bike was so exciting until she forgot to hit the shift button, even though there was a bright light beaming in her face. She fell in love with wheelie bars and never got back on a street bike again. 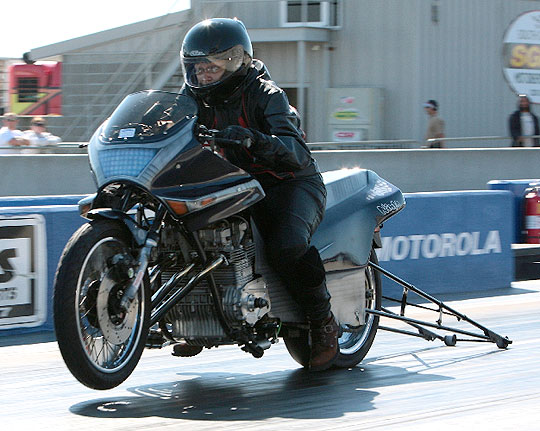 When John first introduced Gladys to his family, they were so sure she would get him to stop racing. After all she was a former police officer who specialized in accident reconstruction and saw the worse of the motorcycling experience. They were shocked to later find that she now not only supported John’s racing but actually started racing herself. John does all the mechanical work on the bikes but over the years Gladys has learned to do some work too. Gladys said she doesn’t feel complete if John is not with her at the line but too often they end up competing against each other. She said they love each other prior to the tree but at the tree he’s just another racer that she desperately wants to beat and she does everything in her power to do that. And on occasion, she does.

Goals: To continue learning to be a better rider and obtain more sponsorship.

Interest outside of racing: I make 95% of my clothes. I enjoy sewing as much as I do drag racing.

Favorite movie: I don’t watch a lot of television