Person of the Week: Greg Stephens 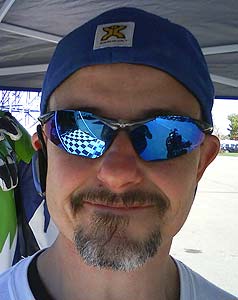 Born May 13, 1967 in Carlisle, Kentucky, Greg Stephens is an outdoorsman who loves all types of motorsports from tractor pulls to NASCAR. His drag racing career has stretched the span of twenty years, but only the last two and a half years have been associated with motorcycles. Greg has been involved as a Trophy Driver, Top E.T. crew chief, Jr. Dragster crew chief, and now his new love, a motorcycle racer.

When asked what he does for fun when he’s not racing, Greg replied, “Work.” Greg is a paint & body man by day and by night, as a side job at home. Greg’s story is one much like the majority of racers, whatever it takes to make the money to pay for the expenses to the next race. Greg and his wife Kim also enjoy camping, but these days’ camping is usually done at a drag strip. Greg has three grown children: Jackie, and twins Angie and Charlie, plus grandchildren Alexis and Sadie.

In Greg’s short history of motorcycle racing, he has accomplished unusually high success for a rookie. Running the IHRA Summit Super Series the last two years at Mt. Park Dragway in Clay City, KY, Greg finished #2 in the points in his rookie season plus racked up the Runner-up honors at the World Bracket Finals. His most memorable moment was the 2007 IHRA “Fall Shootout” bike race at Ohio Valley Dragway where he fought his way through a field of 90 bikes for the $1000 win. In 2008 he continued racing in the local IHRA series, but added AMA Dragbike events to the schedule. In all Greg has won nine events in his two short years of racing.

Although his quick success has brought numerous wins, Greg said his best experience was his first AMA Dragbike event where he made it to the quarterfinals racing the best of the best. This year he will follow the whole AMA schedule riding his ’04 Yamaha R6 in Street and Pro ET plus adding a brand new Kawasaki ZX10R that he will compete with in the Schnitz Racing Street Fighter class.

First motorcycle: 1985 Suzuki GS550ES previously owned by Nicky Haden (His first race bike!) What he would give to get that bike back!

Favorite foods: Steak, burgers, and about anything Kim cooks.

Favorite movies: Action movies are the best, but I like any movie that has anything to do with going fast or racing!

Hero: My wife Kim for making so many personal sacrifices over the 19 years we have been together to help make my dream as a semi-pro racer become a reality, and for puttin up with me for that long. She is a great mother and grandmother, plus the greatest wife on the planet, and my biggest fan!