Person of the Week: Jack Learment

Person of the Week: Jack Learment
By Keith S. Kizer 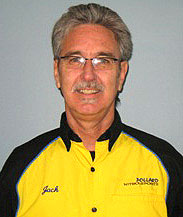 Born December 21, 1950 in Saskatoon, Saskatchewan Canada, John Donald Learment was raised by parents who both served in World War II. He grew up in suburban Mississauga Ontario, just west of Toronto. I know you are thinking two things right now. One, wow I didn’t know that Canada had a Mississippi sounding kind of place. But I bet you can’t make a rhyme out of it like (Miss-iss-ippi.) Second, didn’t we just have a Canadian story last week on John from Mississauga? What are the odds? Yea, right Eh?

Anyhoo, Jack’s interest in motorsports started when his father used to take him to the old CNE (Canadian National Exhibition) at the Toronto fairgrounds to watch the Super Modifieds. Back in the late 50’s and 60’s they ran the Modifieds and Hobby Stocks on an asphalt track built around the Toronto Argonauts football field at Exhibition Place. Jack remembers the excitement of racing, the sound of the engines and the smell of racing fuel.

Jack’s experience with the two-wheel world started by riding other people’s bikes. It started with a Sachs moped when he was about 10 years old. From there he rode a few step through 50cc Hondas followed by a few Honda CB160’s. The bike Jack really contributes his riding skills to was a twin carb Triumph Daytona 500 that belonged to his friend’s brother during Jack’s high school days.

The first pass down a drag strip for Jack was at the Old St. Thomas Dragway in 1975 at a Wednesday night grudge and TT session. As almost every story I write includes, “One pass and I was hooked.” The track became part of Jack’s weekly routine. In the late 70’s a fellow by the name of Dave Connery showed up to the track with a 1200cc Z1 wheelie bar bike that ran 9’s. That was it, Jack had to have one of those big inch, high compression motored dragbikes after hearing and seeing Dave’s bike.

On Saturday’s, Jack and a friend of his Bill Hope would drive to Cayuga Dragway Park to watch Bill’s brother Ralph race his NHRA Comp car. Then on Wednesday nights and Sundays Jack would still beat around on streetbikes at the local track. More and more dragbikes would show up going quicker and faster so Jack and his friend finally pooled their resources and put together an 1132cc all motor small tire bike with wheelie bars. For the 1980’s, April to November racing seasons where spent either at St. Thomas, Cayuga Dragway Park, Detroit Dragway or Ubly Michigan. 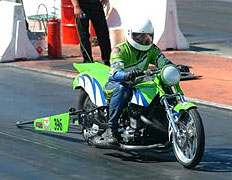 When I asked of Jack, what he was best known for in the sport, he said, “I’m probably best known for longevity in dragbike racing as most of my modest collection of trophies and plaques are for how my bikes look rather than for winning races.” Jack has also served as a team member of Pollard Nitrosports with his good friends, Geoff and Greg Pollard on their Top Fuel Bike. They were the first and only Canadian dragbike team to run a 5-second pass and to win a national event in Top Fuel. Geoff won the last professional Top Fuel event at Indy at the AMA Dragbike event in 2009. Jack said that was a very special day when Geoff beat McBride. He didn’t know that old fat white guys could jump that high. The pair of 5’s were ran at Valdosta at the National Finals in 2009. The photo below, taken by the official beverage coordinator for Vantine Racing (Genie Muldoon) depicts the celebration after Geoff’s 5.93 run. McBride (background) had to shutoff due to a fuel leak otherwise the fans may have seen the first and only side-by-side 5-second pass. I know it’s hard to believe with Korry Hogan’s many 5’s that it has still not been done. 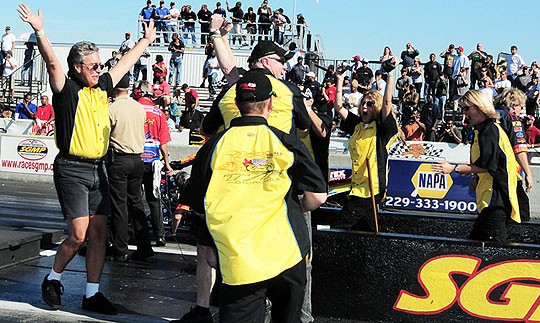 I always ask subjects of VIP stories to tell me their favorite drag racing stories. Jack said he had a large collection of the usual road trip, pit party, million ways to win/lose in bracket racing stories coupled with the enlightened rogues and characters that he has met in the sport. The first story that came to mind was he said he has to be one of the few to have dodged a deer running between two bikes at the top end of the racetrack and not just once but on two occasions.

Jack said his best save was the day his left side handlebar broke off just as he let the button go. He was in the semis of a quick 16 and practically had a bye to the finals because he treed the other guy buy a day. To make matters worse know one got it on video.

His favorite thing about his years at the races is that he got to see a lot of great and historic passes. Jack was the last pair of Pro ET bikes to go down the track prior to Elmer running the historic 6.06 at the Prostar Indy event in 1996. Jack was sitting on the return road awaiting his tow back to the pits as Elmer and Tony Lang came by. He said he would never forget the sight. It’s also impressive that the pass is still #11 on the all time ET list, fifteen years later. 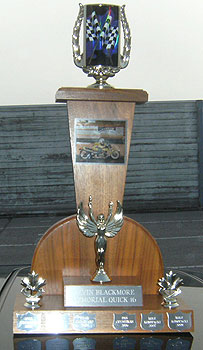 I received an email a short time ago from Graeme Jones who nominated Jack as a POTW. Not only because of being a staple in Canadian drag racing since the 80’s but for also being the catalyst behind the Kevin Blackmore Memorial Quick 16 at Grand Bend Motorplex which just celebrated its 9th annual event in which the King of Canada, Mike Konopacki, won.

Kevin Blackmore was a longtime friend of Jacks and a hardcore dragbike racer. His death was a big shock to the racing community and they wanted to do something to honor his memory. A small group of racers got together in 2003 and approached Grand Bend Motorplex about adding a Q16 race to the annual bike event weekend as this format was one of Kev’s favorites. As well Kevin’s fellow workers at Lafarge Cement put up a beautiful trophy to be awarded every year to the bike racer for best sportsmanship at Grand Bend Motorplex.

Grand Bend management Paul Spriet & Ron Biekx have been on board since day one and make a major contribution to the prize pool every year. Brad Prong, the entire Portiss Family & Sarnia Drywall Supply, Wiseco, Platingmaster, Mike Law & Raceworks Canada, Sparky’s Performance Centre, Jack and a variety of others have helped make each year a successful remembrance of Kevin. This photo is Kevin at Grand Bend in 2000.