Person of the Week : Janie Palm

Person of the Week: Janie Palm

From the age of nine I was into speed, barrel racing horses, not what you expected I bet. I was absolutely infatuated with the sport and the competitive nature of it; I lived and breathed it for all my middle school and high school years that is until I was a junior in high school. My interests turned to boys, choosing a college and growing up. It wasn’t until later in life that I found my real passion, motorcycle drag racing.

I had a high school boyfriend that had a CBR 600 that I rode on the back of. I knew that wasn’t the place for me and talked him into teaching me how to ride it. I learned a few skills from him, enough to ride it around the block a few times but when we split so did motorcycling for the time being.

I started riding motorcycles regularly in the fall of 1999 after completing the Motorcycle Safety Foundation class at the local college. In the spring of 2000 my boyfriend Charles and I went to the local drag strip, Gateway International Raceway, for kicks one night and we were hooked. Charles has been riding and racing since he was a kid but wasn’t really into it as much in the years prior to 2000.
I met Charles at a bank I was working at back in 1995. He is a driving force in my racing. He is my mechanic, my biggest supporter, my biggest competitor and my coach. We love competing against each other; I think it makes us better racers because we both want to win so badly. 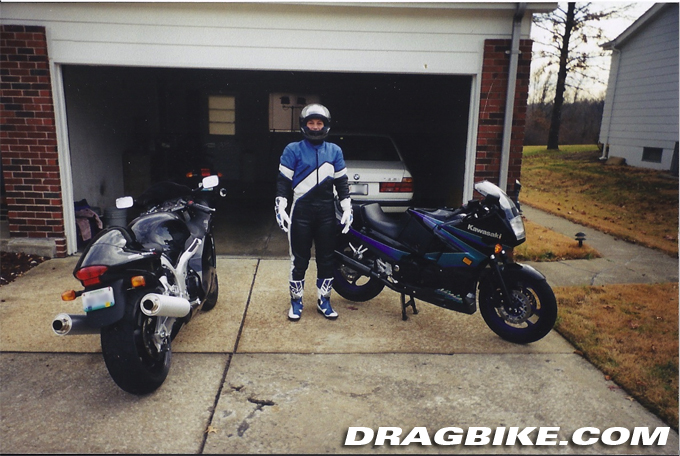 Janie with her first bike

In 2000 I began racing at Gateway International Raceway (GIR), located in Madison, IL, in the NHRA Championship Bracket Racing series. I rode a 2000 Kawasaki ZX6R in the Street Bike Class. In the first three years of competition in the class I finished in the top 10.

In 2005 I found myself wanting a little more speed so I bought myself a limited edition Suzuki Hayabusa. The very first race on this new motorcycle I scored a national event win in Street ET at the AMA/Prostar event, held at Gateway International Raceway.

In 2007 I competed in and won the Pro Bike Championship at GIR. I also raced in the Street Bike category where I was runner-up in the championship. 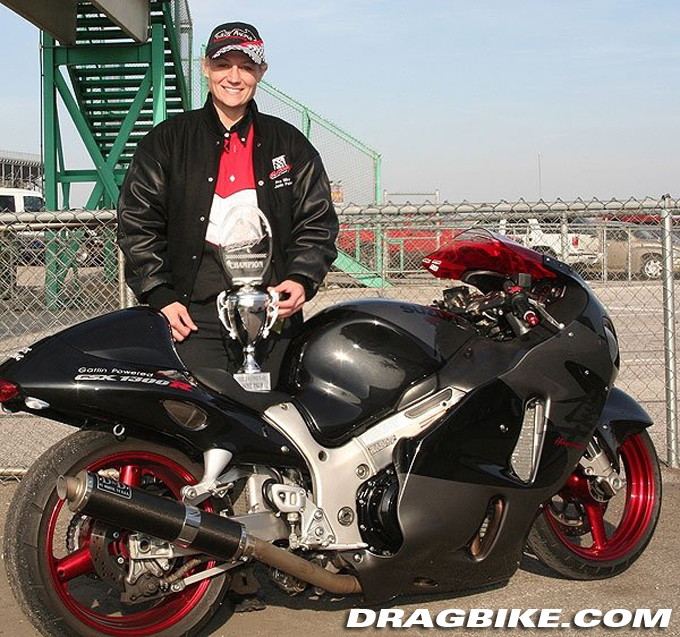 2008 and 2009 were filled with local bracket racing and trips up the highway to Byron, IL to race in the 2WheelSpeed series. In each of those years (2008 and 2009) I raced a 2008 Suzuki Hayabusa that I absolutely loved. I was able to win an event, Street ET, and take home the extra cash by winning the King of the Hill, a run off between all the ET class winners. 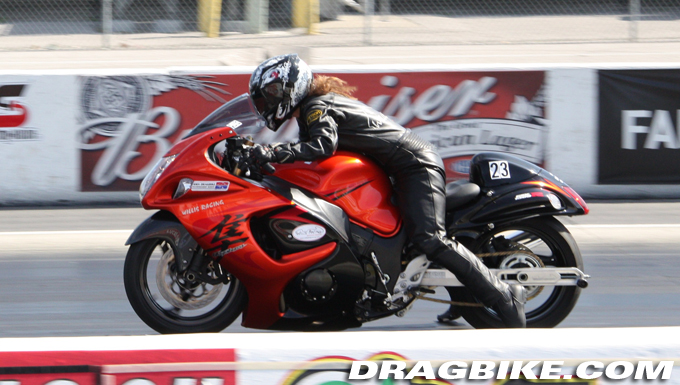 In 2010 I caught the eye of the local BMW Motorcycle dealership, Gateway BMW. They asked me to test their new sport bike, the S1000RR, at a Midnight Madness event. They were happy with my performance and partnered with me in 2010 to campaign their bike in select drag racing events and series. One of those was a new series at GIR called the Outlaw All Stars (OAS); they had a 9.50 Index class for motorcycles. I won two events and got runner-up in two events, which earned me my second Championship. 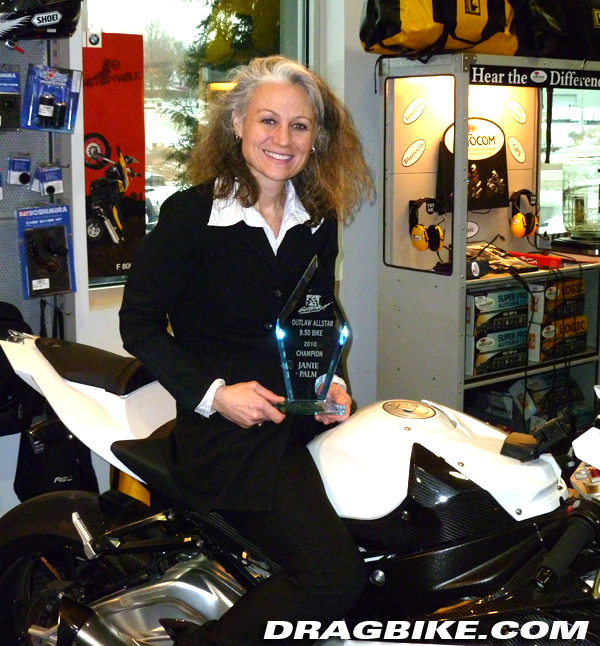 In 2011, Gateway International Raceway closed its doors so we were forced to travel out of town to race. Gateway BMW put their sponsorship on hold for the year so I jumped back on a Suzuki Hayabusa for this transition year. We chose to race the 2WheelSpeed series at Byron Dragway in Byron, IL. I ended up winning an event in the Street ET class and King of the Hill. 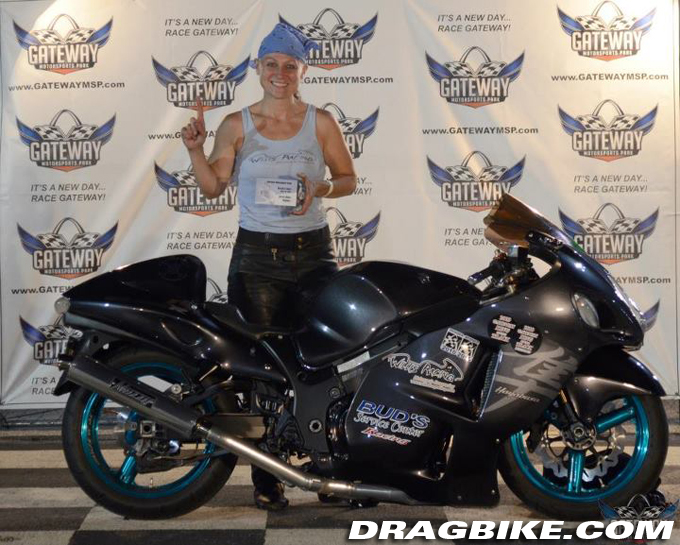 2012 has been an excellent year for me as our local track opened back up and is now named Gateway Motorsports Park (GMP). I have been competing in the NHRA Championship Bracket Racing series in Street ET and Pro ET at GMP. In Street ET I won three races and was runner-up in two. The same for the Pro Bike class; won three and was runner-up in two. This gave me enough points to win the Championship in each class. We have also been racing in the 2WheelSpeed series at Byron Dragway in Byron, IL. There are two races left for this series but I already have a win up there this year in Street ET and King of the Hill. 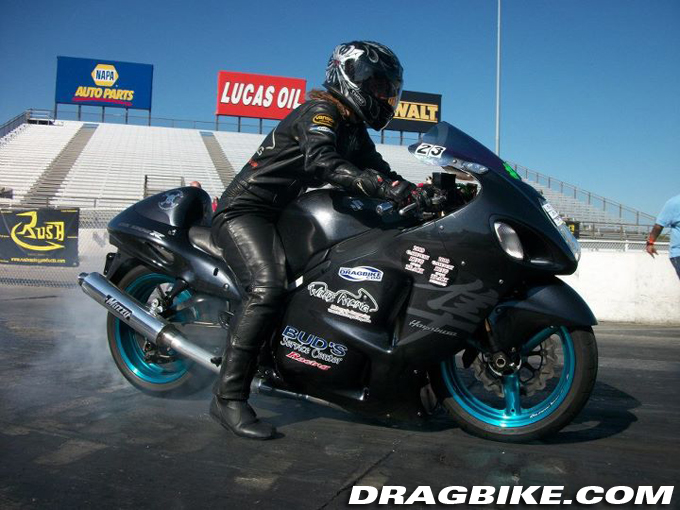 I just received great news this week; Gateway BMW is renewing their sponsorship with me and I am taking delivery of a new 2012 BMW S1000RR this week. I will get some much needed seat time in on the bike for the remainder of the year and next year I hope to continue the same success I had this year with the new motorcycle. They have been incredible to work with and always there for encouragement even when I wasn’t riding their motorcycle. I encourage anyone that is even just slightly interested in the BMW S1000RR to go take a test ride at your local dealership, they are amazing motorcycles! 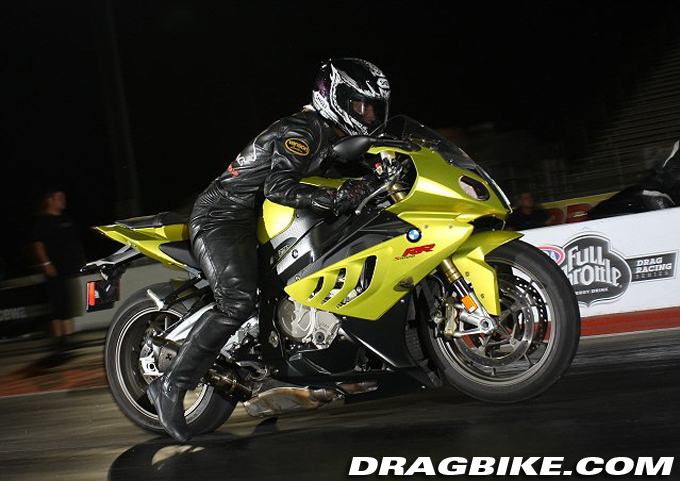 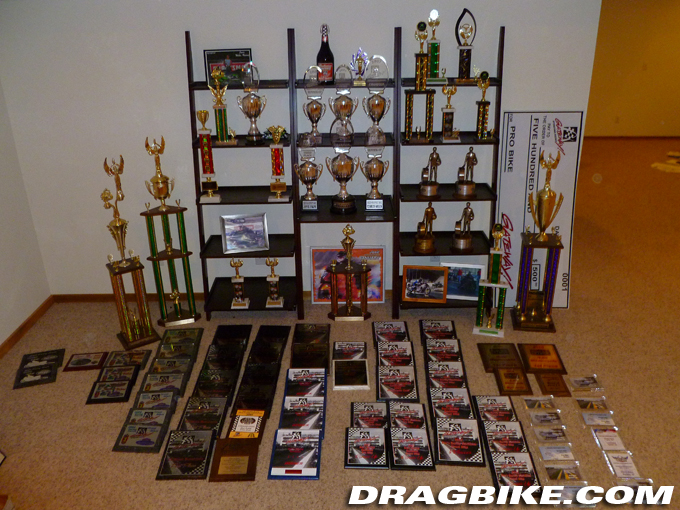 Goals:
I would like to bring more recognition to motorcycle drag racing, this sport needs more exposure in order for it to continue to survive and thrive. I would like to bring more local bike riders out to the tracks bracket races in hopes they get hooked. I hope to encourage more women to start racing as it is such an empowering experience, I think everyone needs to feel the rush when you make a pass down the drag strip. As far as my racing goals, I would like to continue to compete locally in our bracket events and nationally continue with the 9.50 index classes and move up to the 8.90 / 8.88 index classes.

Interest outside of racing:
Competing in 5Ks and some 10Ks, Fitness – P90X and TRX, Puzzles

Hero:
I have never really put much thought into this; I haven’t really tried to model my life after anyone in particular, I just try to do the best I can and treat everyone with the respect that I want to receive in return. My parents have always been very supportive in my life and I have nothing but respect and love for them both.

Editors Note: We would also like to mention that Janie is an essential part of the Dragbike.com Research and Development team. We love her and wish her well in 2013 with your Gateway BMW Sponsorship! Thank you for all your hard work and dedication behind the scenes.