Person of the Week: Jay Regan

Born September 24, 1963 in Newtown, Connecticut, Jay Regan grew up your typical ball and stick kid with no motorcycle influence. After the family moved to Florida as an early teenager, Jay, like many boys at that time, was introduced to motorcycles at the age of 15 just because you could get your motorcycle license a full year earlier than a car license. Since he had a couple of buddies who also rode, their interest soon turned to competition. They would drive over to see the likes of Freddie Spencer, Wes Cooley, and Eddie Lawson road racing at Daytona each year. They also attended local drag racing events at Sunshine Dragstrip in St. Pete and Bradenton Dragstrip in Bradenton. 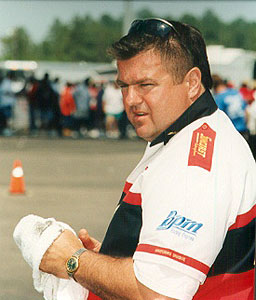 Today, most know Jay as the owner of Murdoch Racing Enterprises & Suncoast Distributing. What most don’t know is that Jay was an accomplished rider himself during the IDBA, NMRA, and early Prostar eras. He was the 1987 IDBA Heads-up Rookie of the Year, 1990 IDBA Top Gas Champion, and 2-time Pro Mod top ten. But if you look through the history books, Jay’s name does not show up. Jay competed under the name Jimmy Hayes.

Jimmy Hayes was born in the sick mind of George Babor back around 1985 during an evening bench racing / beer drinking session at the late Mike Murdoch’s shop. The likes of George Babor (Babor Performance Motors), Mark Doucette (R&D Motorsports), Dave Scaggs (D&G Chassis) and Todd Moore (then all MRE employees, except George, who’s shop was next door) were some of the usual suspects in regular attendance of such meetings back in the day. The subject of middle names came up and HAYES happens to be Jay’s. Babor blurted right out that “you should race under the alias of Jimmy Hayes.” For whatever reason, Jay decided to do it. The next month was one of those infamous Tom Laughlin DRAGBIKE! races up in Gainesville. Jay filled out his tech card with “Jimmy Hayes” on the name line. He wound up runner-up in ET. Later that off-season, the DRAGBIKE! newspaper came out and the results listed “Jimmy Hayes” from “parts unknown” as the ET runner-up and it stuck.

The name Jimmy Hayes did come in handy through the years of racing. Back in the old days there was always somebody having air-shifter related problems (mostly installer related) at the National events. They would be looking toward MRE for help solving their issues in person. Mike used to always try to pawn them off on Jay, then would get mad when the customers would come back to him after being unable to find “Jay”, where Mike had steered them to! He also had fielded countless calls at the shop from customers who had no clue that Jimmy Hayes and Jay at MRE were one and the same. He once even had a fellow IDBA Super Gas competitor tell Jay on the phone exactly how to beat Jimmy Hayes, Bruce Sauer, and a couple other front-running Super Gas racers.

Jay took over as owner of MRE after the death of Mike Murdoch in 1993. Jay became an institution on Prostar’s manufacturer’s midway and had a successful career as team owner of numerous racers, most notably in Pro Mod. In all, Jay and team amassed over 20 national event wins, several Pro Mod & Funnybike top ten plates and was the recipient of a couple of “Sponsor of the Year” awards. In 1993 he lost the Pro Mod championship to Billy Vose by one round. Jay came into the World Finals event only needing to go a couple of rounds to clinch the title. He went out early and Billy had to win the event and set the record, which he did beating Jay by less than 10 points on today’s standards. The next year Jay won the #3 and #7 plates with one bike and two riders, Rick Perry and himself, respectively.

The class Pro Mod is currently celebrating its 15th anniversary year as the most successful Pro class in motorcycle drag racing history. Jay coined the phrase Pro Mod to bring the class into existence. Originally known as Pro Comp which was dominated by turbos, the class did not have it’s own identity as did Funnybike. IHRA’s Pro Mod class was the most popular car class at the time, so Jay convinced Scooter Kizer to change the name by saying, “If you change the name to Pro Mod, I’ll sponsor the class.” Thus started the MRE Pro Mod Challenge, where qualifying points earned riders the right to compete in an 8-bike race within a race at the National Finals. The success of the modern day Pro Mod class can thank Jay for establishing its roots.

Now you know the history behind the man. But please, leave it behind him, Jimmy Hayes is a name from the past and I’m sure Jay would appreciate it if you kept it that way. Happy racing.

Favorite foods: Anything without onions

First motorcycle: Tomos Moped when I was 14 because no license was needed for under 50cc back then.