Person of the Week: Jerry Cooper

Born May 6, 1962 in Peoria, Illinois, Jerry Cooper was destined to live a career in motorcycle drag racing. While most involved in the sport today started out either racing some other form of motorcycle racing or drag racing cars, Jerry first started racing motorcycles at the drag strip at the age of fifteen. 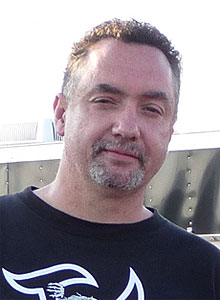 For those who know your racing history you will remember that in the late eighties Jerry was teamed with Pro Stocker Charlie Gresman, both living in Florida at the time. He and Charlie competed in the first ever AMA Dragbike event when it was known as IHRA Motorcycle Division. Jerry then took a fulltime job with George and Jackie Bryce when they moved Star Racing to Americus, GA. This was the early stage of the late John Myers’ career. Jerry and the Star Racing crew also prepped the bikes of Ron Ayers, Jim Bernard, Hector Arana and others. Jerry left Star Racing to start Cooper Performance around the time Angelle started with the team.

Many will certainly remember Jerry for his number of years as crew chief on Tony Lang’s Top Fuel bike. Jerry remembers that Tony Lang recruited him because of their common shared dedication of working until 3 or 4 am at the races. One night, Tony came over to the Rickey Gadson Funnybike pits, which Jerry was the crew chief of and said, “You are as dedicated to this sport as I am,” and offered Jerry a job. The two spent five successful years together in Top Fuel. The crew chief that took over after Jerry’s tenure was none other than Gina Trett, daughter of legendary Elmer Trett, and the future Mrs. Lang.

Last season, Jerry made a return to NHRA Pro Stock racing as part of a season ending two-race stint with the G2 Motorsports (Star Racing) team assisting former teammate Ken Johnson with rider, Chris Rivas. They won both races. Back at Cooper Performance, Jerry and staff are busy building bikes for not only drag racers but also for roadracers, motocrossers, and flat track racers, which include current 85 gp AMA National Champion Tyler Butts. Most notable of the AMA and ADRL Pro Mod racers are Jack Young, Carlos Wilkerson, Nicky Corley, and Richard Gadson.

Jerry Cooper and his stable of riders and customers have always been a force to be reckoned with in the sport of motorcycle drag racing. You can rest assured that the level of competition in Pro Modified will continue to grow as long as Jerry is involved. Where Jerry goes, champions follow.