Person of the Week: Les Stimac

Born June 28, 1971 in Flint, Michigan, Lester Stimac first experienced motorcycle drag racing as a spectator, a familiar story that can be said by almost everyone who has ever raced. Les said, “It was
always interesting to watch but it’s not fun on the sidelines.” So as a teenager nursing a broken leg from a snowmobile accident, Les stumbled across a used dragbike for sale at a local swap meet. 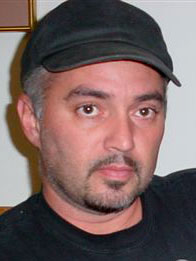 For $1,500, Les purchased a Suzuki GS 750 with Mikuni flatside carbs, along with an air shifter. Nothing special, but a great starter bike. He learned how to ride from friends and soon had a bike that would run consistent 10.60’s all day long. Old Blue, they called it, won Les a lot of money at the local track.

Several years later, Les decided to move up to a small tire conversion chassis bike that he later found out was built by Marco Andreano. A 1327cc, push button start nitrous Suzuki that ran a best of 7.81 @ 172mph and “was by far the most maintenance-free bike I ever owned,” said Les. “That bike fooled a lot of people with the stock block. You could pull up to the line and run with the big boys and they didn’t know what hit them.”

Les competed in IDBA’s 10.50 class and Super Gas before moving to Prostar. In 2005, Les got his first car tire chassis from ARC, and with help from Greg Ciszewski they took the 1327 engine, freshened it up to a 1500cc and graduated to Top Gas. With the success of that experience, they sold that bike and purchased a Koenig Low Boy Pro Mod Suzuki. In 2007, Les began his pro rookie season and learned how much money it took to field a competitive PM motorcycle, but it’s something they had dreamed of doing. The result was the AMA/Prostar #4 Plate and winning Rookie of the Year honors.

Les continues to compete in both AMA Dragbike and ADRL, but to date his most memorable moment was beating Paul Gast at last year’s Bristol event. “Just to have the opportunity to stage against one of the sport’s legends was an honor in itself,” said Les. Les is in hopes that his son, Tevin, will someday take the controls, but his wife, Lori, wishes they would have never sold Old Blue, a bike that ran the same everytime down the track. That’s the addiction of motorcycle drag racing: you always want to go quicker.

Interest outside of racing: Family, Traveling, Camping at the lake