Person of the Week: Lizz McCarthy

Person of the Week: Lizz McCarthy

From Cancer to Comp Bike – and now in the sevens… 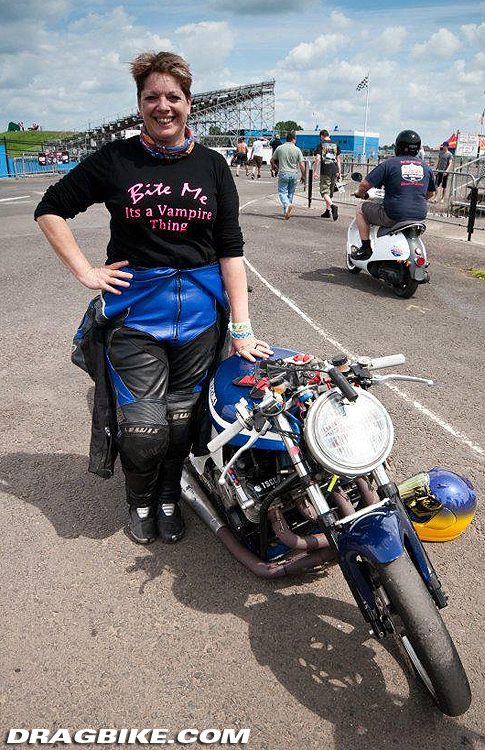 Lizz MCarthy was born into a competitive family, Father played County Cricket, Mother encouraged us all – I played lacrosse and Hockey, and my brothers, sisters and I used to compete in local Horse Trails, and used to break bones regularly hooning about on 50cc peds, sometimes catching fields on fire, backfiring over the fields, skateboarding, roller skates, bicycles, go carts or ponies. Sometimes hills up and down, sometimes in a straight line. Always laughing, always in trouble for something or another. I miss my parents terribly, I think they would be quite proud of me now.

What was your first exposure to motorcycles?

My First boyfriend had a motorbike, he also had long hair and a leather jacket! My Parents went spare! In total defiance we stayed together for a few years, I took my bike test in 1982 on a Honda Superdream 250 cc. Got a few points on my license for my trouble too.

What was your first exposure to racing (of any kind)?

I worked as a Track Marshall at Brands Hatch in the UK. 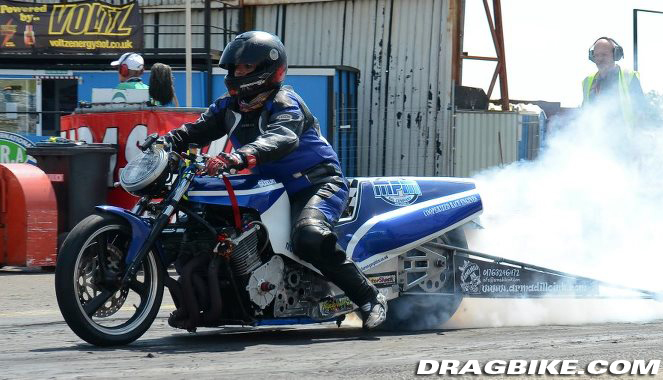 While attending a Bulldog Bash a friend of mine was crewing for a slick and barred bike and got me involved with the idea of helping out. From there, started to crew, and eventually had the opportunity to race in 10.90 bike on a bike owned by Paul Wing. Bracket racing and me did not get on, and soon went from 10.90 to 9.90, still breaking out! Financial constraints stopped me from going any further at that time, so started crewing again. I learnt a lot, but I missed not racing!

How did you meet your significant other and what is their involvement in your racing?

I met Kev Charman at the track , I used to follow the progress of this bloke who had a nitrous Bandit in Super Street… and it was the same colour as mine, but I crashed mine on the way to The Bulldog….. (Of course I met him at the track. You can’t be involved in this type of sport without being involved with someone who shares the same interest, believe me I tried – It is not a hobby it is a way of life!) I have been proud to see him win 3 Championships, Comp Bike, Funny Bike and Top Fuel bike, see him crash at 171 mph and survive on said fuel bike, and happily he is still a part of it! He makes it look effortless. He is my rock, mentor, calming influence, and sparring partner. I love him very much, and will never be able to thank him so much for the support he has given me over the years. 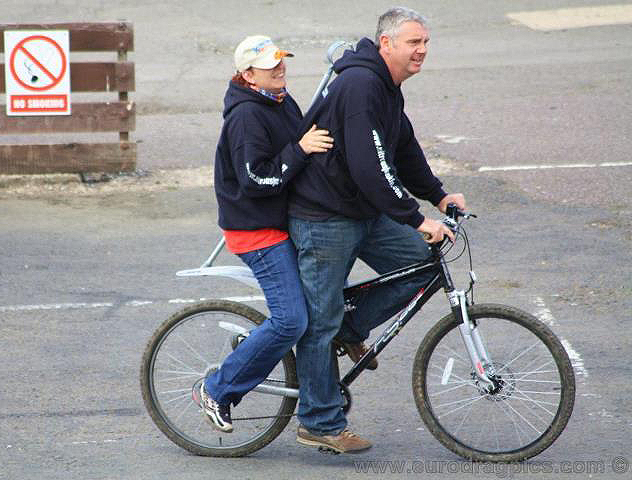 What year did you start racing?

Well, 1999 was the first go, when I found I was rubbish at bracket racing! It’s not natural to slow down!
Went back to crewing for others for a while, but had another road bike, after crashing the Bandit so wasn’t missing racing too much. Then in 2008, again, at the Bulldog, Kev offered me a go on his Pro Mod bike. I ran a 9.1 @ 143mph normally aspirated, and was hooked again, damn you Charman!

Kev had sold his old Comp Bike rolling chassis to John Austin, to buy the Pro Mod Chassis. I bought Steve Venables old Kawasaki Super street rolling chassis initially to make a comp bike, but ran out of time for the first meeting, so John called up to see if I would like to borrow the comp bike chassis, as he had run out of money to get his finished. That was in 2008, and I still appear to be using it!

I have had my fair share of disappointments over the last few years. My fantastic but also rookie crew during my first season of racing took turns in lapping valves to give me a chance to qualify the following day, and carried on until way after midnight from taking the head off at about 3 that afternoon. With blistered hands, we threw in the towel, and watched for the rest of the weekend. I must mention the crew, Sarah “Minx” Chapman, Lisa Ambler, Jemma Cooper, and Bryony Wadkin-Snaith for all their effort and hard work. It was one hell of a learning curve, for all of us, and massive thanks must go to them for their relentless enthusiasm.

I’ve done some serious head damage, the pistons had that many holes, you couldn’t even make ash trays out of them, I’ve blown head gaskets, damaged a gearbox, the list was getting endless. Lack of experience, money, data logger and track time, I was probably doing un necessary damage, bending gear selectors and scuffing up the dogs on the gears. Slider clutches are not forgiving. You cannot shut off in anything other than 5th It stopped becoming fun, I became a fully paid up member of an elite club here, aptly named “The burnout and push back club” Kev was getting quite exasperated with it all by this time…. After all he was trying to race too. Thanks to Gipp, Chris and Minx for pointing our that I wasn’t crap, but could get much, much better with parts and practice!

History of racing bikes and class

Chris Pyke – Kev’s Crew Chief (on loan! ) – nominated for Crew Chief of the Year 2011 – been Crew Chief for the past 7 years, and is the most knowledgeable, and one most amazing person. Sarah (Minx) Chapman, has a hectic lifestyle, but is always on the end of the phone when not at the track, laps a very mean valve. I’m hoping I can shame her into coming racing a bit more next season!Richard Gipp, sings to me, sorts my nerves out, and gives great advise,the most laid back person I know! With Kev as well, I am blessed with very,very good crew! You are only as good as the crew you have, without them, I would be nothing.

I have neither the funds or the Sponsorship to race seriously on a competitive level, I have no spare engine, or spare parts, so am doing the best that I can from parts donated by Kev. I would love to compete on a more serious level –I would love to do more, and maybe race in Europe, it’s hard work with the 3 of us. Kev still races, at present in Prostock Bike, Jake races in his own right in Junior Drag Bike, so it can be a logistical and financial nightmare!

I don’t have much by the way of sponsorship. It is a serious misconception that you are rich, or sponsored up to the eyeballs. We have no contingency programmes over here in the UK. If there is any one out there who may be interested in sponsoring me – product or financially, I would be so happy to hear from them. Please e mail me, and lets talk, and see what I can do to promote you too. We know I can do it, there are not many women racing over here – it shouldn’t just be a man’s environment!

Goals: I want to race in Funny Bike, I am seriously hoping I can make this a reality.

Interest outside of racing: Really ?

Favorite movie: The Worlds Fastest Indian/ Once upon a time in America/ Mad Max/633 Squadron/Pink Floyd the Wall

What was your first motorcycle? (blushes) Honda Superdream 250

Heroes: My Parents were pretty cool.

You can find us on Facebook or
and www.nitrousjunkie.com