Person of the Week: Mike Lozano 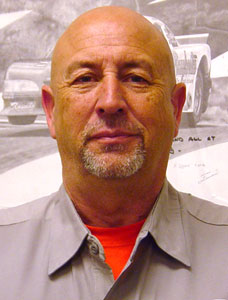 Born June 13, 1951 in San Antonio, Texas, Mike Lozano was born into drag racing. His mother Helen was a school teacher and his father was the man who organized drag racing in South Texas in the early 50’s. Harold Lozano was President of the Alamo Timing Association and an NHRA rep.

In 1957, Mike attended his first NHRA national event at the age of six in Great Bend, Kansas, where his Dad won “B” Street Roadster. Racing together has always been a family affair for the Lozano’s. Mike started driving race cars at the age of fifteen and raced until the late 70’s, when he stopped to focus on the race engine business. For the next twenty years the family’s attention was building race engines which led to four “24 Hours of Daytona” victories along with many other roadracing accomplishments.

It wasn’t until helping former Prostar Top Fuel Harley ace Mark Conner with the Alamo City fuel bike, that Mike got the bug to drag race motorcycles. In 1999, with the support of his brothers, Ben and Joe, Mike and his wife Connie started their motorcycle drag racing team. With immediate success winning the Modified championship in the American Drag Bike Association, Lozano Brothers Racing moved up to Pro Mod in the All-Harley Drag Racing Association winning the championship in 2002. That achievement led to building a 45 Deg. V-Twin to race in NHRA Pro Stock Motorcycle.

It was during their time at NHRA that one of the car team’s crew was looking at Mike’s data and told him his clutch was not working right. Mike went back to the shop and developed a modification to fix the problem. This revolution in clutch design is what led to the MTC Gen II Multistage Clutch, which recently won a BRAPPY (Best Retail Aftermarket Product) award for Best Drag Racing Product at the Dealer Expo.

Today, Mike and team are competing with both AMA and ADRL in Pro Modified. His goal is to run 6.80’s at 200 mph with their 45 degree V-Twin. It’s not too often that you see a successful race team take twenty years off, and return with another decade of success in the same sport. But to go from 4-wheels to 2-wheels, makes this group of Texans a one-of-a-kind team and family.

Crew Members: Bobby Hargroder (partner in the race team & good friend), Connie (wife), Mark Conner (who I blame for getting me started in this), Ross Stroud, Buddy Bergermere

Special Recognitions:
I’m too old to remember all the details, a couple of best appearing, one wrench of the year, won a Wally for best appearing at the NHRA Southern Nationals in 2004.

Heroes: My dad & my brothers