Person of the Week: Simon Giordmaina

Person of the Week: Simon Giordmaina

My child hood is a very memorable one, I have an older Brother, George, whom helps in every way in personal life and above all in My Drag Race Life. When I was young I always remembered myself as being mischievous, one  particular event I remember is when me and George used to go to the same school, I asked my brother to get me out of trouble and when he looked back he saw the whole classroom, 30 children, running after me because the teacher kept the whole class after school because of something I did :o)

Something else that I will always cherish was Football (soccer) at the age of 17 I played for some of the top teams in Malta. I also Played for the Maltese National Team where we played abroad in places like Italy, Bulgaria & Armenia. All this is thanks to my parents especially my father whom always supported me in every training session or game in Malta or even abroad,  he was always there in every moment and still is in My Drag Racing career now.

My Mom was always a house wife making sure she got involved in everything we needed, as the most important thing for her is that we were happy.  I remember her having to go out to work also to keep up with family expenses. My father always worked hard, I remember a time were he was balancing 3 jobs to make sure we always had everything we needed, Upbringing and education was always their first priority. I am sure it wasn’t easy for them at the time and we are all proud of them and we will always be thankful for what they did and still do for us.
I think my parents are a mirror of what me and my brother are today.

My first exposure was when I bought a Honda CB200 as I needed something suitable for me to go to work with, I used to work as a bar tender.
I saw the bike at the shop and had to have it, when I picked it up from the bike shop I realized that I was never thought how to ride a bike, I just went on it and drove away. It is then when I realized my passion for bikes.

I always loved Competition, My father made us drive the car on his lap when we where young and we used to pretend we where racing. My first Competitive drag race was with my Yamaha R1, after 2 days having the bike, I was suggested to enter a Drag Event and I was runner up in my class. That was the first step in Motorcycle Drag racing, from that moment on I never looked back and always aimed high, year after year step after step. Nothing was easy these past 10 years but with the help of everyone around me and the hard work and dedication, I always reached my goals. 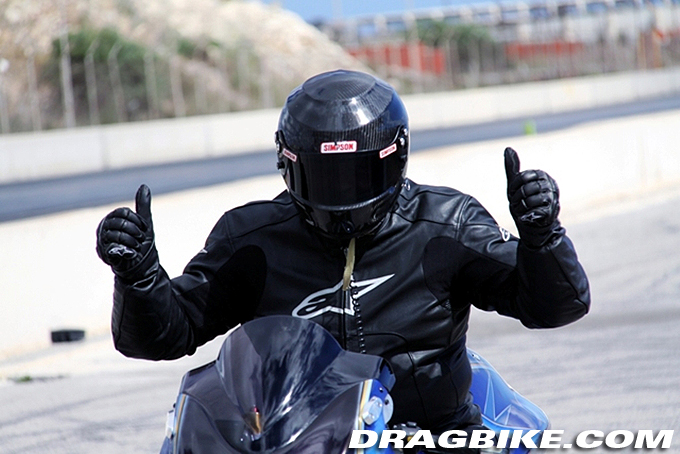 I love all motor sport but the feeling in drag racing is superb, I can never in anyway explain what it takes to go nearly 200 mph in 7 seconds.
It’s not just a straight line racing, you really have to get into it and be ready for big challenges especially to accept that power is nothing without control, it takes a lot of knowledge to take a 550 – 600 hp bike down the track smoothly on a street tire, not any rider can do this, this is not a fast stock bike that you can handle mistakes, this is something else, anybody who rides these bikes must be confident in there tune ups, I think Super Street Bike is the hardest task you can have on a motorcycle, Its mean machine at its best.

Is your wife involved in your racing?

I am married to Graziella whom I met at a bar, at the time I was a proud owner of an OPEL ASTRA GSI so the day I saw her I made sure I gave her a ride home with the car, I think I managed to impress her.
She is the perfect wife and I would not change anything about her, she is very much involved in my racing, we talk everything between us before we make any move and she encourages me in everyway. 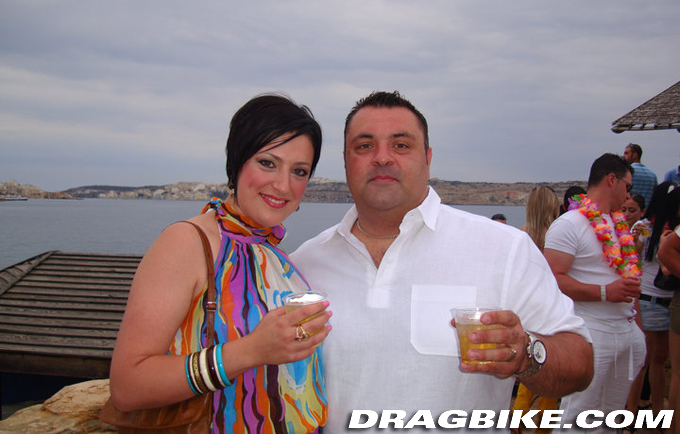 What year did you start racing or being involved in racing?

it was the year 2000 when I started taking things a step forward.

My first Race Bike was the Yamaha R1 which I converted to a nitrous bike and then build a Turbo system on it, it was fast at the time as I ran 9.01 at 163mph and I always ran in a super street class. But than new modern bikes where coming in and they where just as fast on a stock engine and I realized I had to do something to keep up, so Graziella and I decided we will look for a better bike and it is then when we thought of building a Turbo Hayabusa.

SUZUKI HAYABUSA TURBO / SUPER STREET BIKE CLASS.
In Malta apart from the super street class I also race in the open class where bikes are equipped with wheelie bars, slicks etc… and I am still the record holder fastest and quickest in both classes. 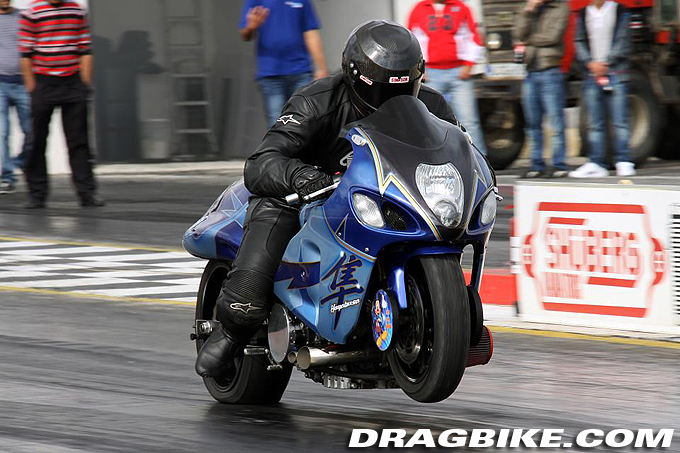 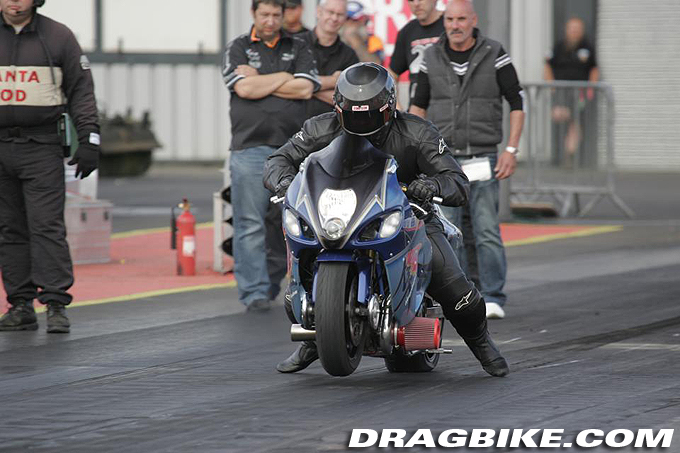 Crew Members: Apart from me and Graziella 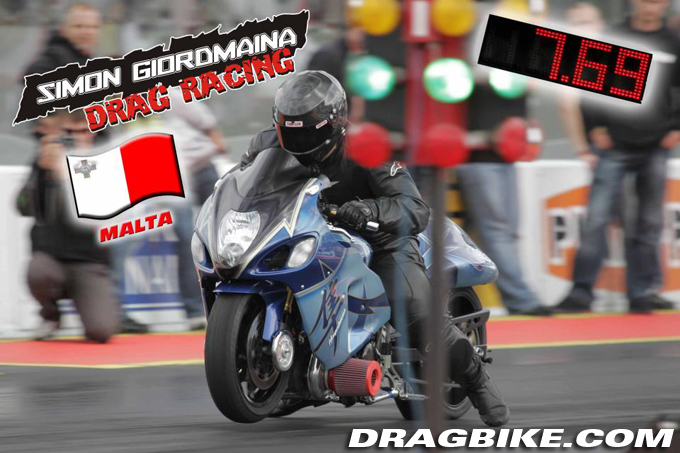 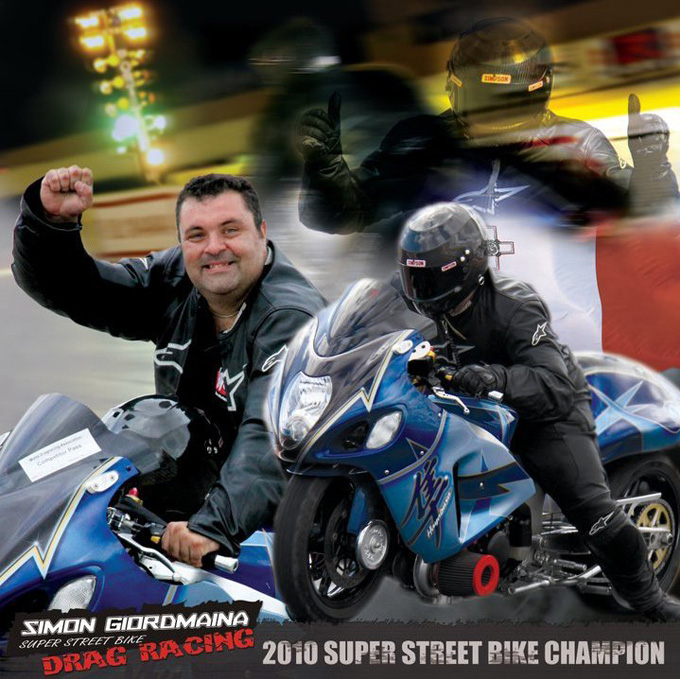 Recognitions outside of racing: My football career and the good times I spend With Graziella and our son Jayden….

Goals: This is a tough one, okay my goals for this year are to Break My own Record here in Malta. I would also like to try and change the setup of the bike to an outlaw and see what the outcome would be  (this can be without me on the bike) Negotiations are in the making as we speak. If all goes to plan, we would be expecting some very good results in the coming months with my bike (stay tuned), but most importantly is that we enjoy every minute of it.

Another goal is to run in the ACU Top Fuel Championship with either a Top Fuel Bike or a Funny Bike…..  But if the opportunity comes to light a top fuel bike would be choice as that is the most competitive.

Interest outside of racing: Having Quality time with my Son and Wife is the most important.

Do you own a classic car or truck? I own a 4×4 Ford Sierra RS Cosworth it’s a 10 second car at the strip

What was your first motorcycle? Honda CB 200

Hero: I am my own Hero 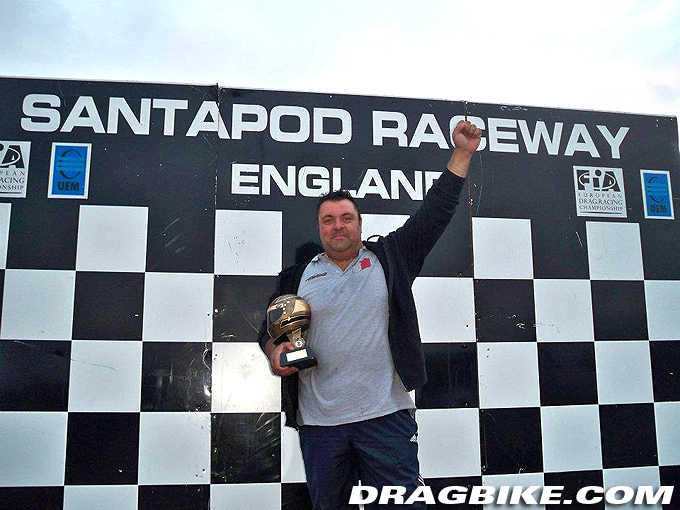 Thanks To: Big thank you goes to My Wife Graziella for being there, not only in the Great moments, but her support shines at the worse moments where I will be close to giving up.

My Parents and my brother George, especially my father, He is always Behind every decision I make and Backs me up at all times, Although he does not like it when I make mistakes during a run He’s always aiming high and want me to be the Best.

All the persons that helped in anyway, I don’t want to leave anyone out (you all know who you are) Thanks guys.

The Malta Drag Racing Association Committee, Members and spectators, I am sure the committee always make there best to deliver the best they could, with all there limitation they are always delivering a Good track that we can break records on, and a Big one goes to all the members and Spectators that Keeps the MDRA Running and for showing appreciation when I deliver a good run there nothing like watching the crowd cheering when you come back from a good run in front of the Stands.

Last But Not least The Malta Motorsport Federation and Kunsill Malti ghall-iSport (Malta Sport Council) for involving themselves in the Licences and paperwork we need and appreciating that we all do this to Fly the Maltese Flag Always at a High Level. 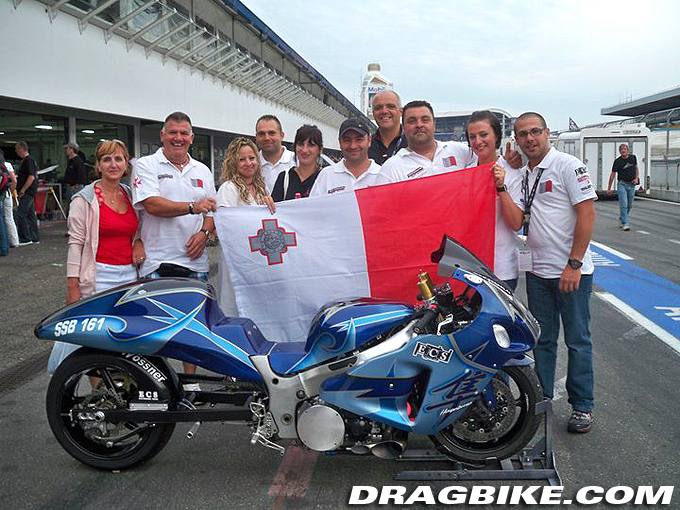 Read more about Simon on the team facebook page.