Person of the Week: Thomas Gates 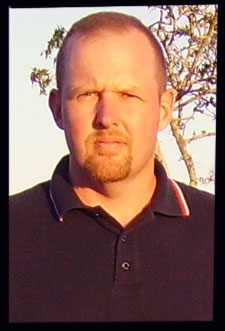 Born August 22, 1971 in Pasadena, Texas, Tom Gates was fortunate enough to grow up with a grandfather and father who both drag raced cars. When Tom was five, his dad bought him a 5hp minibike from Montgomery Wards for Christmas, not to hone his skills as a future motorcycle racer, but as a babysitter in the far out of the way acres of Houston International Dragway.

Sadly, his parental influences wrongly started his racing career in cars. Over the years his racing stable included his starter racer, a ’69 Camaro, a Car Craft magazine featured 9-second 69′ Chevelle, and finally an ‘80 model Camaro on 10-inch tires that eventually ran in the high 7’s.

Fortunately, he found his way back to two wheels eight years later in C.D. Watson’s Texas Shootout Series before moving on to the ultra fast world of land speed racing at the Texas Mile. As in many motorcycle drag racers who came from racing cars, the expense of maintaining a competitive 8-second car is reserved for people with deep pockets. Tom took the familiar path of a transition much cheaper but initially slower. His first bike was a stock ‘04 Suzuki Hayabusa where he found his way into the 9.50’s. And like many, came the transition to nitrous then a turbo. Today, Tom is officially ranked 7th in the World at a standing mile with a speed of 247.000 on a Suzuki Hayabusa. Currently he’s transforming his land speed turbo charged Busa into a Pro Street quarter miler he plans to race in the Hurricane Alley Series and some AMA events in 2009.

In Tom’s real life he’s an estimator for the 175-year-old Sulzer Turbo Services, which specializes in industrial turbomachinery repair. The real importance in is life is his Christian faith that he shares with his wife Cindy and their three children, Kirsten, Tyler and Taylor. But, like most racers, family time is usually intertwined with the local racetrack and family vacations are connected by national events.

Toy he’s most proud of in the garage: a ‘67 Camaro Racecar. He knows the original owner who bought the car new and striped it with 6 miles on the odometer and turned it into a racecar. He grew up around the car in the neighborhood and after changine owners hands several times throughout the years it recently came up for sale. Tom couldn’t resist. He had to buy it if for no other reason, sentimental reasons.