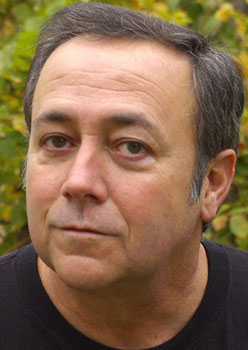 Born September 6, 1954 in Quincy, Massachusetts, Thomas Frances McCarthy moved around the country with his family as a young child living in Florida, Maryland and finally back in Massachusetts around the age of nine. Tom grew up a typical Northwestern kid fishing, swimming and playing hockey when it was too cold to participate in the first two activities. He became pretty successful as a goaltender in high school to the point he had two tryouts with the pros in the Canadian Ontario Hockey Association.

Tom’s first exposure to drag racing came in high school at the Fall Funny Car race at New England Dragway in Epping, New Hampshire. His best buddy, Tony Lopez took Tom to his first drag race and Tom said, “I was smitten when I saw my first burn-out by a 1970 Dodge Challenger.” It’s also where Tom first saw open header cars. He had an epiphany right on the spot and decided one day he had to do this.

Tom later made a few passes in his ’69 GTO but found out he was better at breaking parts than racing. Tom said he never really had the money to go real drag racing and still doesn’t so it has always been a love of his. Tom spent more time writing about the races than being the racer.

It wasn’t until the age of twenty-five that Tom discovered motorcycles. In 1979 his friend Al Davison talked Tom into buying his first bike. Tom purchased a Triumph Tiger 500 Daytona Twin. He rode it only two months before selling it to purchase a 1960 XLCH Harley Davidson.

It was the next year that Tom read a story titled “Fuel Frenzy in Fremont” in a motorcycle drag racing magazine referring to an NMRA race in Fremont, California. In the story, the hero was Elmer Trett, which immediately got Tom’s attention; he had to meet this guy. Later that year, Tom travelled to an NMRA event at New England Dragway. As Tom walked the pits he came across an orange and black double engine Top Fuel bike where the rider/mechanic had just removed the oil pump from the rear engine. It was none other than Elmer Trett. Tom reached out to shake his hand but Elmer held his hand up as it dripped with oil signaling his hand was too dirty to shake. Tom said, “Don’t worry about that, just keep doing what your doing,” and shook his hand regardless. Tom was in awe to meet the hero of the story. 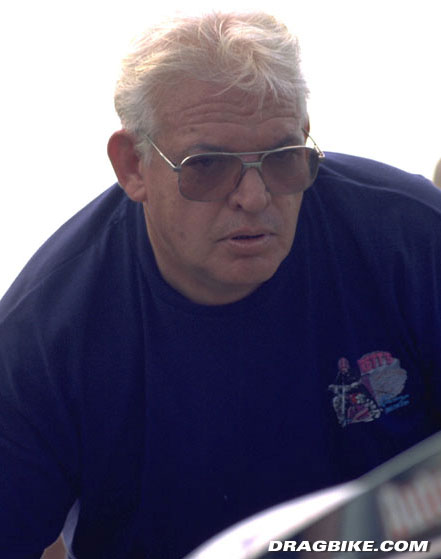 In the fall the same year Tom attended New England Dragway’s annual banquet. Here he met Top Fuel Harley rider Steve Riggiero. Steve talked Tom into buying his lay-down chassis, a Boris Murray original. Steve said Tom could have it for $500 and said, “All you need is to take the motor out of your street bike, plug it into the chassis, get some new spark plugs, a bucket of oil, and you can go racing.” Tom said he was actually dumb enough to believe it and by the spring of 1981 Tom had built his Sportster powered dragster in his living room, much to the delight of his first wife. It was a two-piece chassis, so it was easy to take apart and get it out of the house.

Over the next several years Tom would race in the E/G Comp Eliminator class when NMRA races passed through the northeast. Tom crashed the Murray bike during the NMRA Summer Nationals in 1984. The front end developed a violent vibration putting Tom into a high-speed wobble which resulted in the rear tire breaking loose, sending the bike sliding on its side through the traps at over 100mph. Upon loading the bike up in Tom’s van, Top Fuel Harley racer, Bob Spina noticed that the upper Timkin bearing had rotated loose allowing the front end to have excessive play. After the crash, Tom stayed off the bike until 1989, when Prostar started racing at Atco Raceway in Atco, New Jersey. After attending the Prostar race, Tom soon found himself back at New England Dragway returning to bracket racing. His one and only appearance as a rider on the Prostar tour was at Atco on an 820cc SOHC Honda-powered dragster. Tom also set a National Record with DRAGBIKE in P/G Dragster at 10.79@118.73mph. 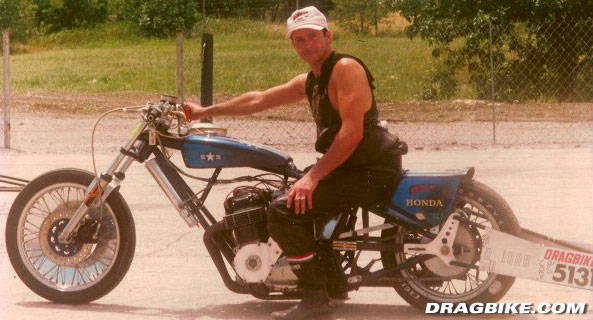 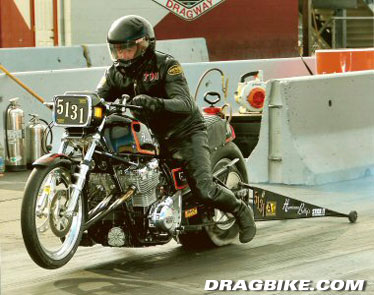 Around the same time Tom started racing he met Bob Frink, editor of the Motorcyclist’s Post. During a motorcycle show in Boston, Mr. Frink said to Tom, “Since you’re going to the drags this year anyway, why not take a few photos, write a few words, and get paid for it.” That statement led to four decades of freelance writing from coast-to-coast. Tom started out writing a monthly column for the Post covering regional and national motorcycle drag racing news within the seven states in the Northeast region.

Tom’s coverage in the Post led to stories and photography work in American Iron, In the Wind, Full Throttle and various publications around the world. In 2012 Tom released his second book titled, Elmer Trett and the Gods of Thunder. A book that culminates Tom’s years of devotion to the class of Top Fuel motorcycles. Writing the book was a promise Tom made to Elmer Trett almost twenty years ago. So once again, Elmer is the hero of the story.

Elmer Trett and the Gods of Thunder sold out upon release in 2012. If you are interested in getting a copy, contact Tom directly via e-mail, we think he may have a few copies that he would be willing to part with. 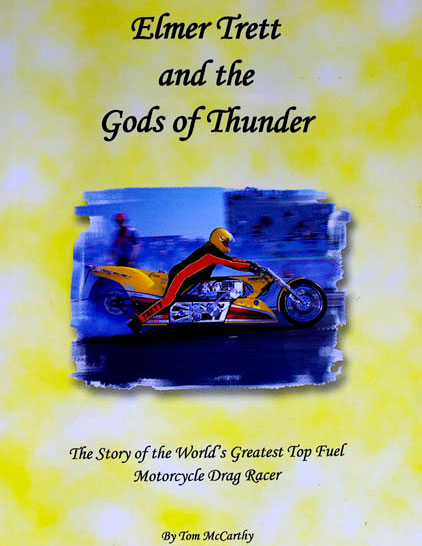